Fierce north easterly wind battering the coastline today. But the sun was shining and, if you could find some shelter from the wind, things could feel quite nice. It was in such a warm pocket that we were watching a Bee-fly at work this morning.

They are extraordinary little things and very busy but this one was obliging enough to rest in the sun for a bit allowing me to take some photos.

These are flies that are trying to mimic bees although they have a fixed non-retractable and extremely long proboscis. They feed on nectar from spring flowers such as primroses and violets – flowers where the nectar is held at the end of a tunnel requiring a proboscis to get to it.

We don’t have many primroses here but we do have a few:

But it does seem to be an exceptional year for violets here this year:

However, this Bee-fly we were watching was feeding from the Blackthorn flowers:

This flower is a very different structure and does not require a long proboscis to get at its nectar. Since the Bee-fly cannot retract its proboscis, it was having to hover away from the flower for it all to work.

There are more than a dozen species of Bee-fly in the UK, some of them rare and protected. This one, however, the Dark-edged Bee-fly is widespread and common, flying from April to June when the Spring flowers are out.

Although it is an important pollinator, passing pollen from flower to flower as it buzzes around collecting nectar, it does have a dark side. It lays its eggs on the wing and flicks them towards the opening of burrows of solitary bees. When the eggs hatch, the Bee-fly larvae crawl into the solitary bee tunnels and predate their eggs.

But, ignoring that unpleasant bit, they are delightful little things to discover around the place and they another sign that Spring is storming on in.

Thirteen days after we first noticed the frogspawn, the tadpoles have hatched. And there are masses and masses of them at the moment but thats good since they are well down the food chain and will be viewed as a tasty meal by oh so many things that live in the pond.

Frogs get started with mating and spawning really early in the year, gambling that the weather will be kind to them, so that this stage when the tadpoles are at their most vulnerable can take place before the predators wake up.

We have a waterproof camera and we experimented with taking pictures under the water. This is not a perfect arrangement since you need to still press the button with your finger under the water and you have to guess at what you are taking since you cannot see – but some of the results are not bad:

Soon all these little animals will disperse and go off to mature and grow at the bottom of the pond and we will catch glimpses of them through the summer as they bask in the mud on warm days, gradually growing their limbs and reabsorbing their tails and gills until, in a few months time, they will be hopping about as little frogs in the grass. Lots of perils ahead of them throughout this process and I hope a few of them make it.

Last night I dusted off the moth trap and put it out into the meadows overnight. I really like mothing at this time of year because catches are very small and you can feel in control and like you know what you are doing. Later in the year, catches are enormous and can be extraordinarily time consuming to photograph, release and then subsequently trawl through the books identifying. All a bit daunting.

So I caught four moths of three different species:

And, the most interesting for me since I had never caught one before:

Very distinctive overlapping wings at rest and I can tell you for sure that this is a male because the female March Moths are flightless and have no wings. Therefore you will absolutely not find them attracted to light in traps but they hang around on tree trunks. Here is a image of one from the internet because I have never see one but then perhaps I should spend some time investigating tree trunks and then I will:

This is a good start to the mothing year!

I never used to particularly like Starlings, with their swaggery brashness but I have completely changed my mind now that I know more about them which is lucky because there was a group of many hundreds of them on the meadows today, poking the ground for leather jackets and bathing in the pond

Luckily, I had already set up the Peanut Cam camera for the day and so I got a photo of them on that too:

What is going on here is that these birds are getting ready to migrate back across the North Sea to Scandinavia. They are winter visitors to the UK, escaping the harsh Scandinavian winter – these are some of the birds that will have been performing breathtaking murmurating dances as thousands of birds gather to roost at dusk in the Somerset Levels, at Brighton Pier and elsewhere throughout our winter.

These birds today are not going to stay here much longer – they will be off, but before they go we will continue to enjoy them while we can:

On 10th of December last year, when it was cold and wintery and all hibernating animals had been curled up for the winter since about October, I found a little slow worm that had woken up and was lingering under one of the reptile squares, about 2 months after we thought we had seen the last one of the year.

I felt that it could only be bad news that it was up in December – perhaps it was small and underweight and didn’t have enough energy to get through the winter and had woken in a desperate bid to get some food.

I only saw it the once over the winter but this morning was delighted to discover it again under the same square:

It has survived the winter! I am so pleased to see that I was apparently worrying about nothing

A beautiful day here on the East Kent coast and the reptiles have reawakened:

Four lizards under a reptile sampling square. Lovely to see them again.

Every night we move the peanuts a couple of metres towards the new hide. In a couple of weeks we should be there. In the meantime we have a camera trained on the peanuts to ensure that the badgers are keeping up with us, and we are enjoying watching their nightly visits

The badger always chases the fox away.

So is the hide going to be ready for when the peanut pile reaches it? Progress has been slow, but yes, we are ready.

So its all a bit unfinished round the edges and we haven’t installed solar lighting in there yet but we do have comfortable seating and fully functioning hide-style windows.

Currently we are moving the peanut cam up past the new trees that were planted over the winter. These are in the process of having a grass and weed suppressant membrane put down and mulch on top of that to increase their chances of thriving.

So in a few weeks we are hoping that we will be comfortably installed in the hide watching the badgers in the moonlight.

We now have 5 cameras in action around the meadows and cliffs.

Camera 1: Has been trained on a hole in the fence between the cliffs and the first meadow for many months. It does a brisk business of recording the comings and goings of foxes and badgers every night.

Camera 2: Peanut Cam. This camera is trained on a moving pile of peanuts as each night we move it relentlessly bit by bit up the first meadow towards the new pond and the hide. We have by now covered about half the required distance and still get a badger visit nightly so we are happy that we are not going too fast.

Camera 3: This is currently doing duty as Pellet Cam, looking at a fence up by the ant meadow where we found a very feathery pellet a couple of weeks ago. I’m hoping for Owls but getting Magpies! However, also have had this:

Camera 4: Frog Spawn Cam. Last year all the spawn was eaten by foxes who waded into the pond. We have had fresh spawn laid a week or so ago and I have a camera trained on it to see what happens next.

Camera 5: This camera just went into position this evening. There is another hole in the fence at the far, far end of the second meadow. We have noticed that there is a grass trail leading from the meadows, through the hole and on a track along the cliff – badgers have been dragging new bedding here as well. This hole is 200 metres from the hole where we have had lovely footage on camera 1 of the badgers doing this over the winter. Are these the same badgers? If it is, then surely they are not dragging the bedding all the way back 200 metres to the sett we know about.

So do our badgers have a second home that they also furnish with lovely fresh hay. Or are these completely different badgers at work with their own sett? We hope that we can recognise the pair of badgers that we have been watching for months now and so we should be able to answer some of these questions in the next few days.

I will finish with some more photos from Camera 3, Pellet Cam: 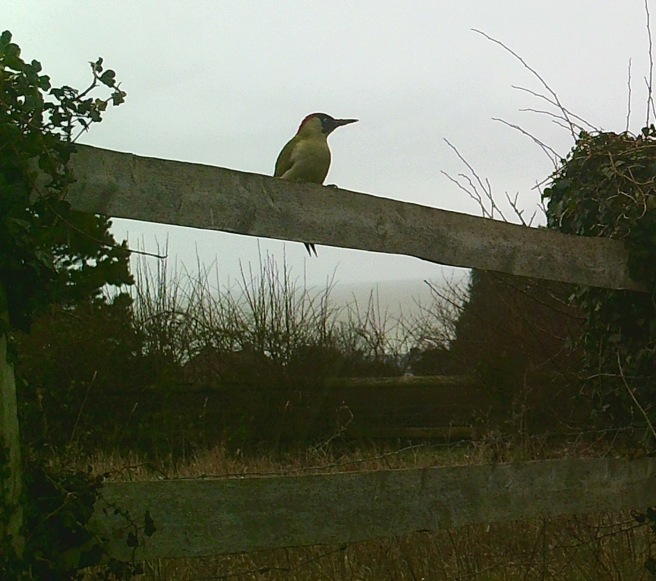