In the corner of the first meadow is a fenced off area used by the previous owners to keep a horse. We call it the Ant Paddock because the grass has not been cut in there for years and years and it has become very hummocky with some quite large anthills. 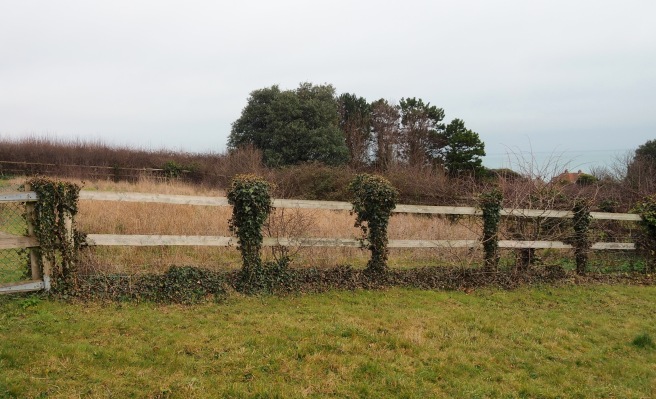 It is very different in there from the rest of the meadow and, presumably, rich in rodent life since they will get protection from the grass tussocks that have built up. Certainly it is criss crossed by numerous fox tracks where they clearly like to hunt.

But it seems that foxes are not the only predators attracted to this area. We have noticed that the ivy below the stretch of fence in this photo is splattered with the droppings of a large bird. And there was also a pellet:

What I didn’t realise until today was that it isn’t just owls that produce pellets. A pellet is a regurgitation of all the things that they have swallowed that they can’t digest – bones, feathers, etc and all birds of prey produce them as well as many other birds as well. We pulled this pellet apart and found lots of feathers and a few little delicate bones.

I have done some research to try to discover what bird might have produced this pellet but not had a great deal of success since there seems to be a great deal of variability. My best guess is that it is a Sparrowhawk since we have seen them around and they eat mainly birds and so you would expect a feathery pellet like this. However, Sparrowhawks tend to lurk in places where they are hidden before they shoot out at their poor unsuspecting prey. They don’t tend to hang around on fences.

The other birds of prey that we have seen are Kestrel (doesn’t eat other birds though), Short Eared Owl and Tawny Owl (I think both of these mainly eat rodents as well).

So its yet another mystery to add to the list. We might get a trap camera trained onto the fence over the next few days and see if that comes up with any answers.

Today we had lunch out in the orchard as a result of a so-called Caribbean Blast of weather being enjoyed in the South East. It won’t last for long though because a gale is forecast. But for now, I would like to delight in the small signs that we have seen that seem to suggest that winter is behind us.

And this last photo from the trap camera a couple of nights ago is not really anything to do with Spring but is just interesting – think thats a  bird in the fox’s mouth but it has really long tail feathers.

With the new hide nearing completion, we are starting to put a couple of handfuls of peanuts out in the first meadow as it gets dark to get the badgers into the habit of calling by. The plan then is to consolidate this for a while and then start to move the little pile of peanuts each night along the cliff towards the hide. The ultimate goal would be for us to be cosily wrapped up in the hide of an evening with blankets over our knees and a mug of tea in our hands watching the badgers and their young snacking on the peanuts just outside.

We have not fed these cliff-dwelling animals before and these last couple of nights have been an interesting new angle for us because we can see interactions between them in a way we haven’t before. In this picture above there are two vixens and the one on the right is completely submissive to the one on the left. If Lefty was facing towards her, the right hand one would be in this submissive posture of ears back, mouth open. Only when Lefty turned away would she get up and eat some nuts. Interesting.

After months of watching both foxes and badgers use the same hole in the fence, this is the first time we have seen both in the same shot. So, who reigned supreme over the peanuts? It was the badger – we also were taking video footage and in the video the badger took a little run at the fox and the fox give ground immediately leaving the badger to polish off anything that remained:

So far so good – we have put peanuts out for two nights and badgers have visited on both occasions. But we have quite a journey ahead of us:

This photo is taken at the new pond which is where the hide is. Currently the pile of peanuts is going down where the hedge is that you can see dividing the two meadows – 100m away.

Who knows how far we can move the peanut pile each night, it will be completely trial and error. I will let you know how we progress….

Stag Beetles are in a lot of trouble and one of my favourite charities, The People’s Trust for Endangered Species, is asking people to build log piles for them.

The logs should be untreated and from deciduous trees and half buried in the ground. The buried bit will start to rot and hopefully be perfect for stag beetle larvae in a few years time.

Today we built our log pile in a shady part of the meadow so that it should stay nice and damp:

We have now registered this log pile with the charity and will let them know how it all turns out – we have not seen a stag beetle here to date but it certainly would be great to do so.