There has been progress on the Autumn Projects.

Work has recommenced on the pond that was dug out by digger three weeks ago.

Here is the action, step-by-step!

As well as all that excitement, we spent a happy couple of hours putting up bird boxes. Three of these were hung on posts by the original pond as part of our Tree Sparrow project, in an attempt to lure them to this little part of East Kent:

Still not worked out where and how to put the Little Owl box up and lots of trees to get planted, but progress is being made.

So, October now. Weather still lovely here on the whole but the days noticeably shorter and crisper. Thoughts are turning to things that need to be done in the dormant season and here are three that we intend to get round to this autumn:

Started this week is this.. 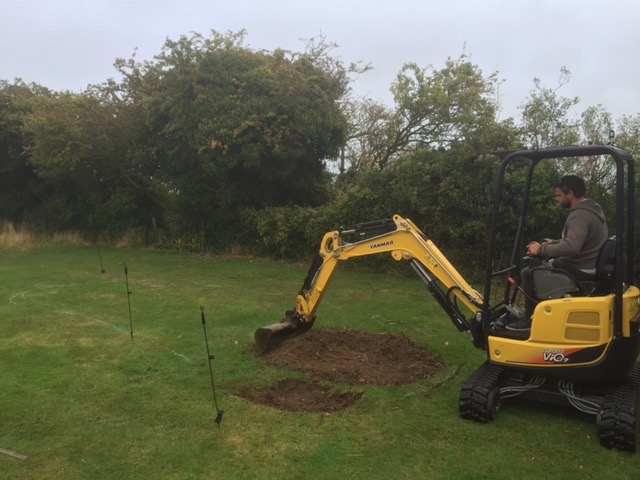 Yep, we are building another pond. Smaller than our existing one and not lined with soil, it should be less vegetated with more open water.

It is being dug close to the field shed which we plan to use as a place to lurk and observe, although it is going to have to be a bit more comfortable and less spidery than it is at the moment for me to want to spend any time in there:

Secondly, there are going to be a few more bird boxes going up:

These are Schwegler bird boxes – made from Woodcrete which has to be concrete mixed with wood chippings, I think – they are very heavy indeed and will last many more years than a wooden box as well as being very resistant to predator attacks. The three boxes that are the same are part of the Tree Sparrow project that we have got going on here.

To recap, earlier this year we were talking to a celebrated wildlife-friendly farmer near Rutland who has put up 300 bird boxes and something like all but three of them have been used by nesting tree sparrows this year (tree sparrows, as oppose to house sparrows, are very rare in the UK). He was of the opinion that if you create the right conditions for tree sparrows then they will arrive since, unlike house sparrows, they do wander far and wide from where they were born. And the right conditions he thinks are feeders of red millet, near standing water and sparrow sized nest boxes. Well, we have had a red millet feeder in position near the pond ever since we got back from Rutland in April, fulfilling two of the requirements and putting up these three nest boxes on posts near the pond this autumn will be the final piece of the jigsaw. Then it will be a waiting game to see if it all eventually gets discovered by the right species of bird. And its a bird that is currently only found in Kent at Dungeness and so this has to be a real long shot – but you never know unless you try.

Oh, and there is another bird box that needs to go up:

Its a Little Owl box. Quite a specialised box since these birds like there to be a tunnel to crawl along between hole opening and the main body of the nest and so this is what this box has built into it. This is another leap of faith since we have not seen Little Owls here, but you never know, that might be because they didn’t have anywhere to nest.

The third thing that we are going to do it to plant several more large trees and are currently researching what these should be. They need to be native, do well in calcareous, exposed conditions and have good wildlife credentials.

Good to have positive, constructive things to focus on now that the lovely Spring and Summer months have passed on by.