We have been absent from here for three weeks during which time we visited the Arctic. That was a very different experience to these meadows in July.

This is a long time – too long – to have been away.

During this time the trap camera had taken 979 images of which the most dramatic was this: 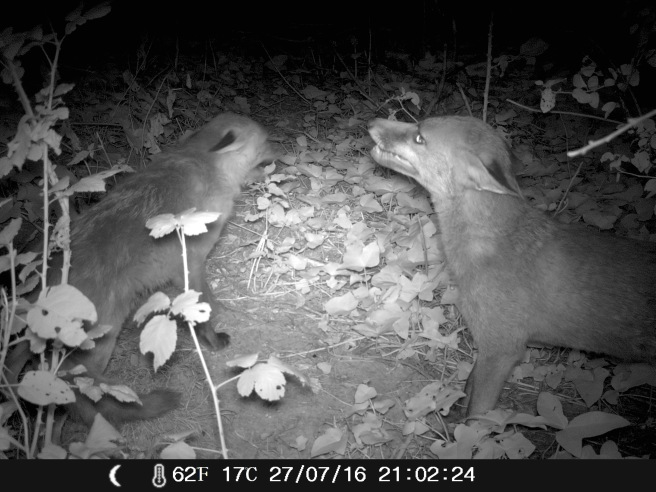 Very obliging of them to have their disagreement right in front of our camera.

But the foxes are still looking in fine shape after the mange crisis over the winter:

On a plant front, it is Wild Carrot and Lesser Knapweed (as opposed to the Greater Knapweed I’ve been going on about for a while) that are now having their day.

The Wild Carrot is quite a plant. Its flowers first form a deep dish and then open up to a wondrous snowflake. A distinguishing feature is the black spot of the female parts of the flower in the middle: 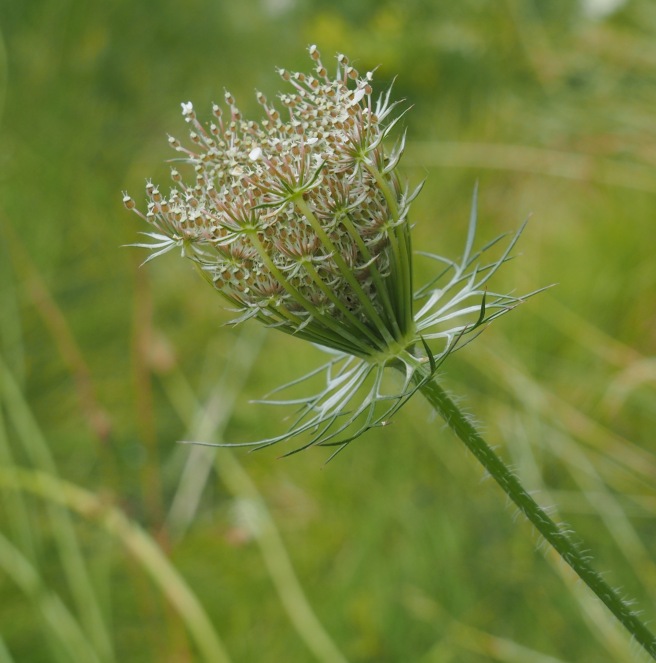 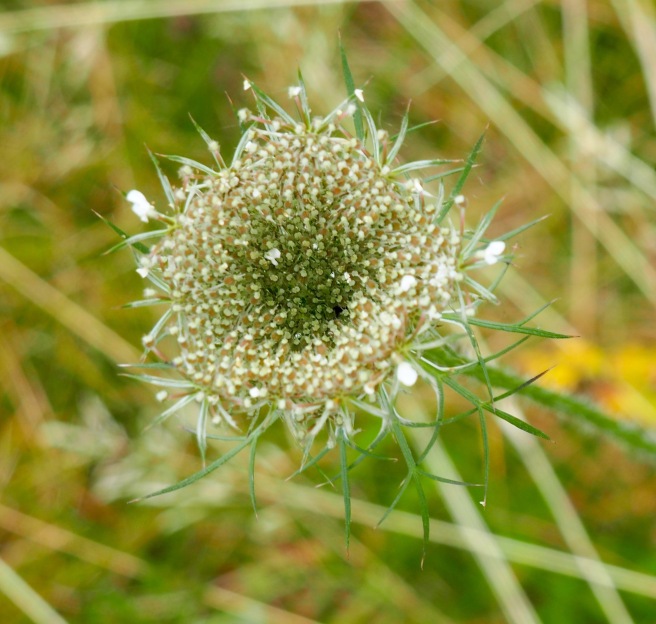 The Wild Carrot is also the larval food plant of an extremely rare and protected moth, the Sussex Emerald. There is a colony of these moths on the shingle at Dungeness and there was also another one at Walmer, on the shingle beach just below these meadows. Just two small colonies in the whole of the UK – and sadly our colony below us has been horribly disrupted this year because a couple of houses are being built. It would be lovely to know that there are still some of these moths here.

And last night I think I caught one of these Red Book Protected Sussex Emerald moths in my moth trap. Its very worn and so it is difficult to identify but I have posted it on the Moth Facebook Group that I am a member of and so far two of the experts have given it a positive ID.

Here is what a fresh version would look like:

But, if confirmed, it is terribly exciting to have a Red Book listed species here. Unfortunately, the farmer is coming to cut down all the wild carrot along with the rest of the meadows later on today. Well, that is all part of the ridiculously difficult dilemma of when to get these meadows cut.

NB it has been subsequently firmly confirmed as a Sussex Emerald and I’m delighted.

The second meadow today on our morning walk round: 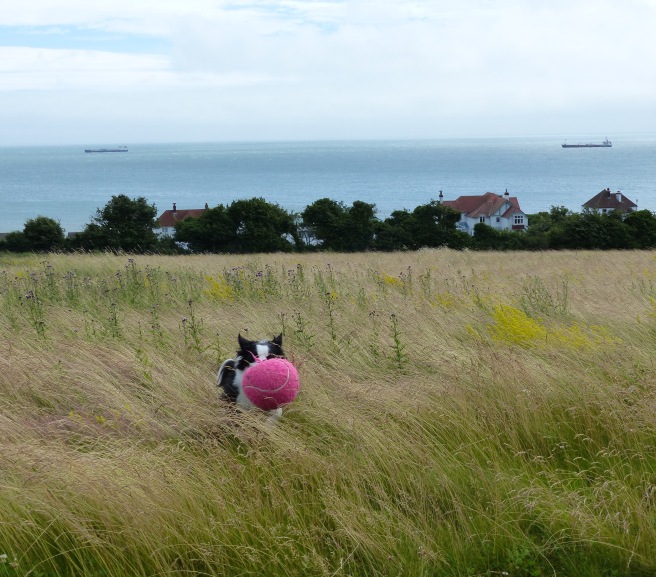 A breezy day with two ships moored up just offshore: The Cliffwater, a chemical tanker registered in the Netherlands and the Suellberg, an oil products tanker registered in Gibraltar. Through binoculars, you can tell both ships carry potentially explosive material because on both ships the life raft is poised at the top of a steep chute to allow a speedy exit. Anyway, clearly neither ship has anywhere it especially needs to be today because both are taking the opportunity to have a quiet day moored up in the calm waters of the Downs.

On our amble round the meadows, here are some of the other things that came to our notice:

Most of the colour in the second meadow at the moment is coming from Ladies Bedstraw. This plant dries to give the scent of newly mown hay and its name derives from the old custom of including it in straw mattresses, especially in the beds of women about to give birth.

Although there is also purple in the meadow from the most wonderful Greater Knapweed:

Every flower covered in butterflies, bees, beetles and moths.

And there is a butterfly that has newly appeared in the meadows: 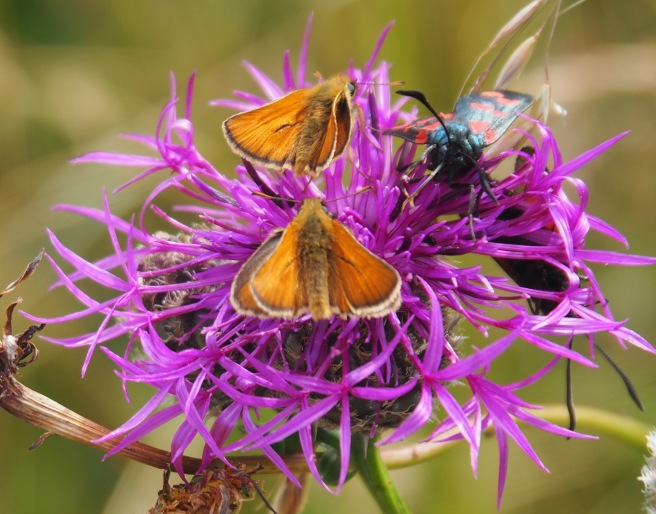 The small skipper. They weren’t here a week ago but are now here and taking advantage of what the Knapweed has to offer.

All over the grasses are silken cocoons that have now hatched out in to hundreds of baby spiderlings. They gather together in a black mass within the cocoon but when they get wind that there is a great big fat human looming over them with a camera, they instantly shoot out into a diverse spreading as shown here: 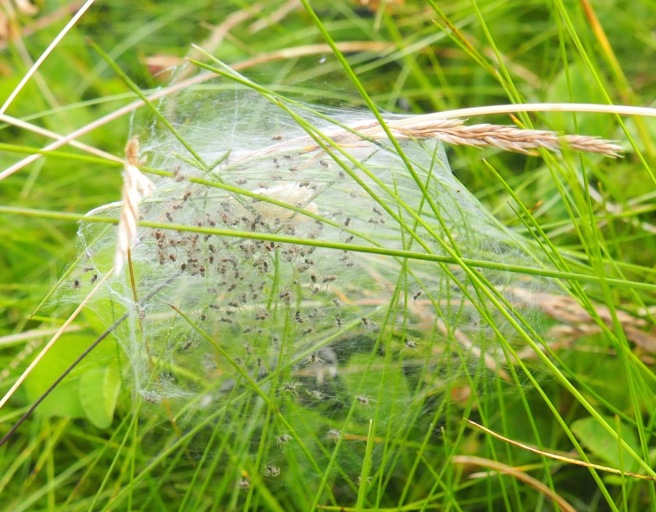 Almost as soon as we put out the reptile sampling squares, an ants nest developed under one of them in the far corner of the second meadow. As we looked under it today, thousands of eggs had appeared. Not sure whats going on – there are a lot of different types of ant here and we don’t know much about them – a subject to investigate further another year. 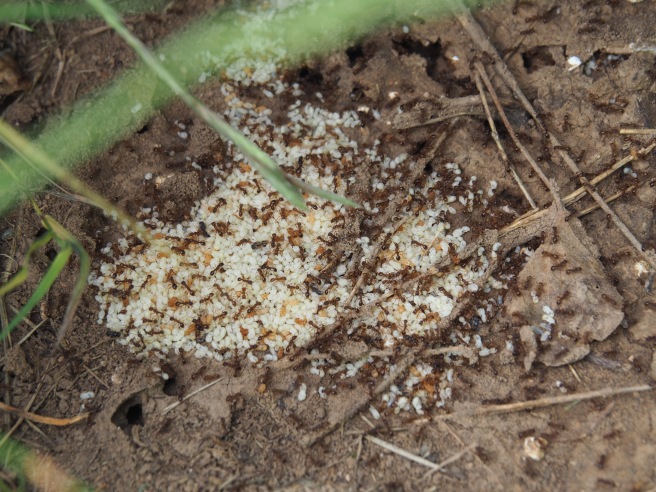 We have a lot of wild rose here and many of them have this gall – Robins Pincushion or Rose Bedeguar  – which has been caused by the solitary wasp Diplolepsis rosae laying its eggs in the rose flower and somehow it takes over the normal operations of this plant and this gall is produced containing the wasps eggs.  A bit shocking but quite a normal sight here. 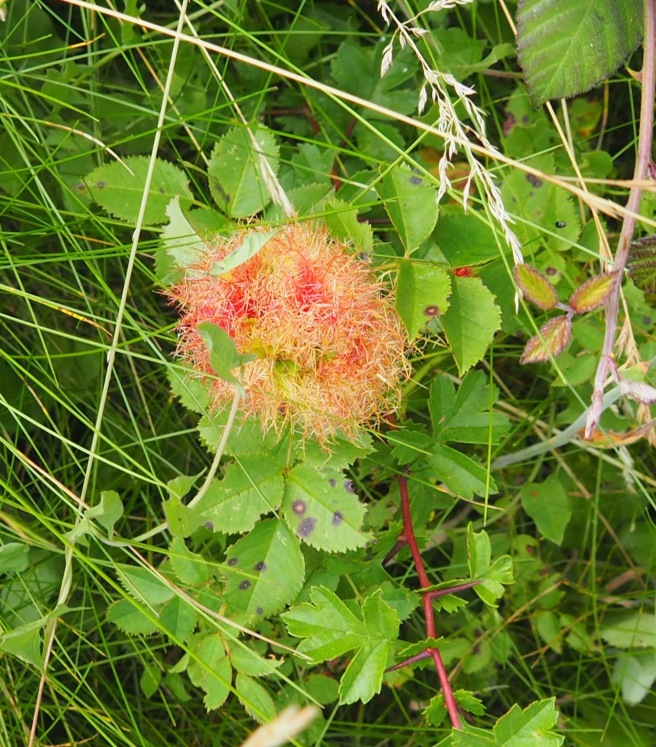 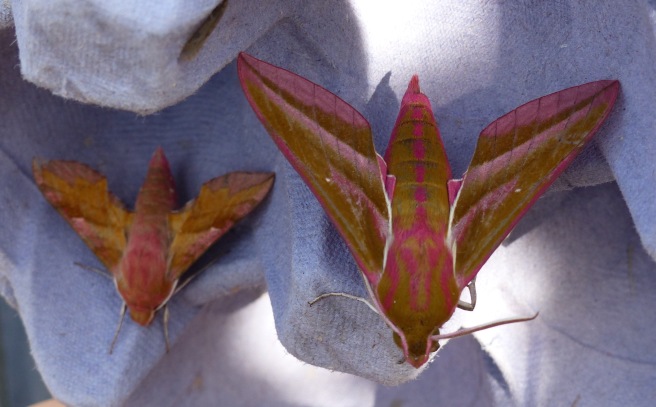 I also got this moth that I have never seen before:

A Thistle Caterpillar: a silk web containing a single black caterpillar in a thistle in the meadow:

Its the larva of the Painted Lady Butterfly, Vanessa cardui.

No stage of this butterfly’s life cycle can survive a British winter and so the butterfly that laid this egg in our meadow will have just flown all the way up from North Africa. Thats an amazing thought. Each Spring there is a Painted Lady immigration into the country and some years this is in immense numbers – 2009 was the last spectacular year when 11 million of these butterflies flooded widely across the UK. I was completely unaware of that at the time. Indeed, I haven’t ever knowingly seen a Painted Lady butterfly and the photo above is not mine. But now I’m looking and so hoping to do so soon.

The butterflies arrive in Britain and immediately mate and lay an egg. The egg hatches into a caterpillar which spins this protective web around itself. It moults through its various stages and  eventually pupates and hatches into a butterfly and so later on in the summer there will be British born Ladies fluttering around as well. These new arrivals migrate back to Africa at the end of the summer.

Finding all this life going on amongst the flowers and grasses in the meadows is a  further complication in the decision as to when to cut it all down. We are currently hoping that the meadows will be cut in mid August which is when the farmer has availability to do it. It would be too late that that point to be used for hay but he would use it as bedding. This date sounds a good compromise between giving the rodents, butterflies, moths and so on sufficient summer and getting the nutrients off the land so that it can progress in the direction of becoming chalk grassland which is our ultimate aim.

There has been a mass emergence of Marbled White butterflies here and this has to be to correspond with the flowering of my favourite meadow plant, Greater Knapweed, Centaurea scabiosa.

Should you not be familiar with this plant, then let me introduce it to you. It is quite a sturdy plant that grows on chalk and that looks a bit like a thistle but has none of the prickliness. It certainly has top quality nectar because it is rare to come across a Knapweed flower that doesn’t have a butterfly or a bee on it and the Marbled Whites in particular love it.

I can’t stop taking photos of it:

But even without a butterfly, moth or bee, it is still providing food for a surprising number of beetles:

And, well, here are some more photos of it just because: 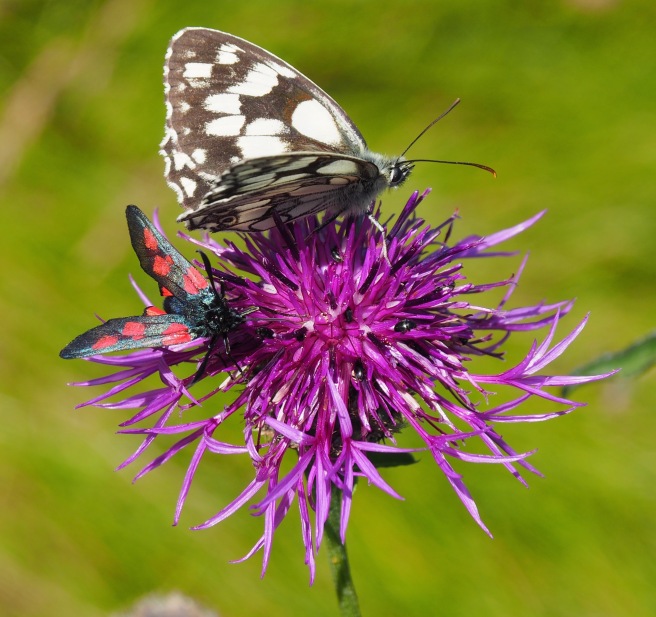 My favourite meadow plant by some considerable distance.

Today was a red letter day. The farmer who cut the meadows two years ago was coming to look at them to see whether he wanted them for hay to feed his cattle. He has a cattle farm on the marshes between Deal and Sandwich.

His biggest concern was their ragwort status and consequently all of today for us was spent making sure that all ragwort had disappeared out of the meadows. Animals know to avoid ragwort if they see it growing in a field but, in hay, they don’t recognise it and eat it and it apparently builds up in their liver and can kill them. In fact he has apparently lost cattle to ragwort and so its a really big deal.

By the time he arrived, we were fairly sure that there was minimal ragwort left. But about seven man hours had been spent ensuring that this was the case! He seemed really pleased with both the quality and the size of what was here.

And what an absolutely lovely man he is. We also met his wife who, as a child lived on her parents farm near Theale by the River Thames at Reading. Then, during the war, they sold the farm so that it could be mined for gravel needed for the war effort. They moved the entire farm from Berkshire down to a farm that they were going to rent near here by train – they loaded the entire farm on a special train, all the machinery, all the cattle, all the sheep, ducks and geese and moved here. It was such a wonderful story. Of course that livestock, moved by train from Berkshire to Kent, was then right in Bomb Alley as the doodlebugs came over, aimed at London. Apparently a shell exploded in one of their fields and killed six cattle and its the only time she saw her father cry.

This lovely farmer is still involved in his farm but its his son who does most of the heavy work  these days and his son has said that they are currently just too busy to take on any more work right now. These first couple of weeks in July are key in making hay because after this time much of the nutritional value of the field gets sucked back underground again. He has given us the name of someone else who might be able to help – agricultural contractors who may be able to come in and cut and bale it for us and then he might buy the hay off them. He thought it looked really good quality stuff which is very pleasing.

Should they not be able to help then he will cut it, bale it and take it away for us once they are no longer so busy – in August. By this time the nutritional value is much reduced but it is still valuable to him as bedding.

We will contact these people tomorrow and see what happens next. If these meadows are going to become hay, then time is absolutely of the essence.