All the cut hay and flowers from the meadow-cutting weekend a fortnight ago has been piled in the small fenced-in paddock while we worked out what best to do with it. We could not interest a farmer in taking it for hay back in July because of the possiblity (..probability) that there was some remaining ragwort in it, even after our three days of toil pulling it all up.

It seemed such a complete shame to pay a contractor to come in to take it away and burn it and so we were very excited when we approached a Waste Company in Sandwich who thought thay would be able to find a home for it with a green composting facility. They came to visit us at the meadows on Friday and looked at what we were asking them to do and – oh dear – because it was cut so late and the meadow plants had gone to seed, they thought that it could not be used for green compost because it would contain the seeds of ‘injurious weeds’ such as creeping thistle which would then be like unexploded bombs in the compost. They were talking of having to deep bury it as a toxic substance. This was bad news indeed and also seemed a little bit ridiculous. However, it seemed we were back to square one with having no idea what to do with all this hay and in the meantime, there is was, all piled up in the paddock – kept low so that it didn’t overheat and spontaneously combust – and presumably now would be crawled into by all sorts of hibernating animals over the next few weeks and if we didnt shift it soon, it would have to stay all winter until they woke up.

We spent the weekend working on the second meadow. It wasnt cut a fortnight ago other than a couple of circuits of the machine round the margins. We’ve been raking this up, bagging it up into Hippo bags and dragging it the really rather uncomfortably long distance to the paddock where the rest of it is that was cut from the first meadow. Also, the Blackthorn in the hedgerows has produced a lot of suckering and these springy suckers generally managed to resist the minstrations of the cutting machine, still standing straight and tall even after we’d directly gone over them. So, we also crawled around on our hands and knees cutting these off with loppers and bagging them up for burning in the newly purchased brazier. It was a tiring weekend

However, the good news today is that the Waste Company phoned and it seems they can use our hay for green compost. They have taken advice and been given the green light and are coming on Thursday with a lorry that can drive to the paddock and load it all on with a grabbing hand. Moreover, they are giving us a good discount on the cost of this job since they wish to support our project (..its still quite expensive though….)

I don’t know how the issue of the Creeping Thistle seeds has been resolved but hope to find out more on Thursday.

I have been giving some thought to hibernating insects over the coming months and have stacked some flower pots upside down in a sheltered south-facing spot against the field shed  as recommended in this months Gardeners World magazine! We are also generating piles of twigs that we are leaving around as shelter 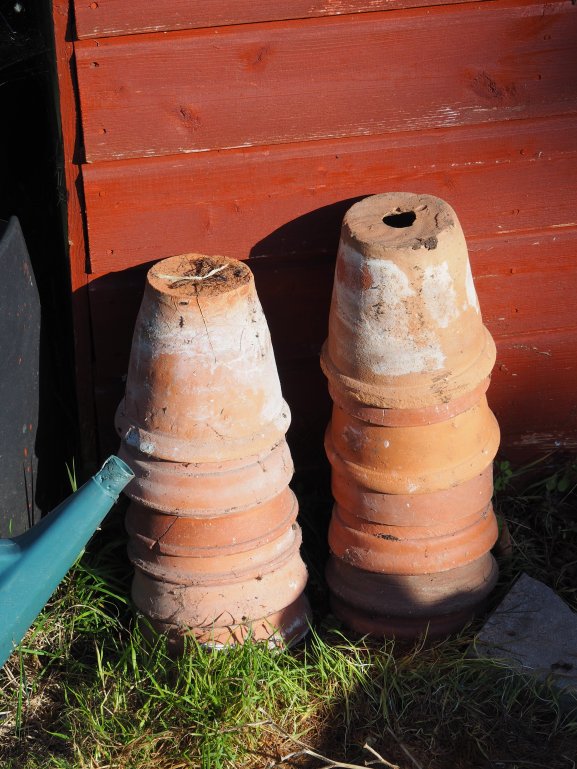 We often find marine-related paraphenalia in the fields, presumably dropped by overhead gulls. One of the oddest was a spotted dogfish tail, but here are some of the other things that we’ve found along with an Emma Bridgewater plate, simply because its very nice…..

The ivy in the hedgerows is absolutely seething in bees today, in epidemic feeling proportions.

I have just been to the local plant nursery and they have had to close off one of their poly tunnels because it’s full of ivy bees, Colletes hederae.

Ivy bees are solitary bees, although they nest in burrows in aggregations and emerge in late August, early September to coincide with the flowering of the ivy.

I got back from the garden centre and took a closer look at the bees on our ivy – yes, its them alright.

So the hedgerows are dripping with berries at the moment. We are planning to cut sections of the hedgerow each year on a rotational basis so that each year there will be berries left around to bridge the hunger gap later on in the winter.

Doing a bit more raking today in the meadows to more thoroughly get up last weekends cuttings and found this chap:

Feel a bit guilty that we might have been responsible for this as we cut the meadows, but he seemed completely fine and I think I’ve been told that lizards can regrow their tails

In about July we noticed that something fairly wacky was going on with the wild roses: 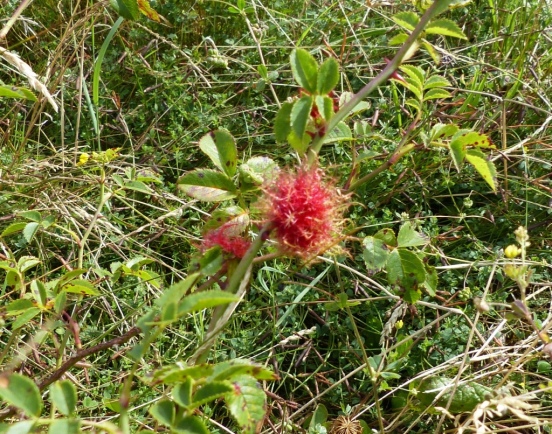 Rather than a simple pink flower, many of them had these spiky red and yellow pompoms.

A bit of research has shown us that these are the delightfully named Robins Pincushions – made by a Bedeguar Gall Wasp and inside this gall are several chambers, each containing an overwintering larvae. The adult wasps emerge in the Spring and will look like this: 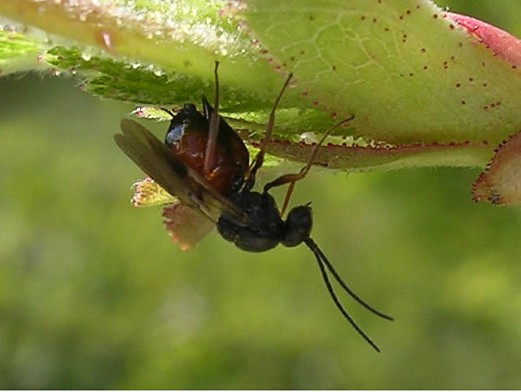 But thats not all!

Many of the Creeping Thistle also have galls:

This is the work of the Creeping Thistle Gall Fly, Urophora cardui who lays its eggs onto the thistle and, after hatching, the larvae burrow into the stem of the plant to form the gall to overwinter in.

The fly looks amazing and I’ll be looking out for it next year – we certainly have enough creeping thistle! 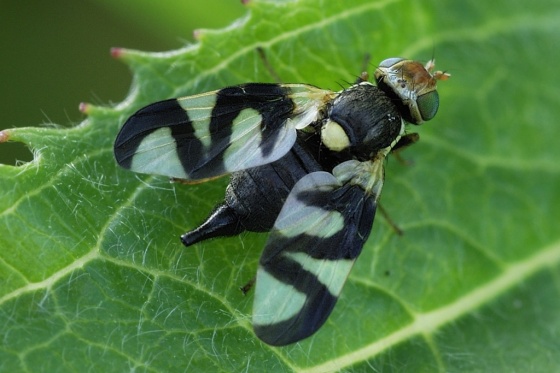 We always knew that these meadows were going to have to be cut this year. In early July we had tried to interest a farmer to take the crop for hay but he was worried about the level of ragwort present. This led to three days of toil and many black plastic bags full of pulled ragwort, but he was still sensitive to the fact that little strands may remain and so we missed the date after which the nutritional level of the standing crop is not high enough for it to be used as fodder (12th July I think).

The decision was then taken to leave the meadows to grow until September so that the insect life has a chance to complete all life cycles on their chosen plants, the voles have a chance to maybe raise another whole generation within the protection of the long grass and we had a chance to take stock and work out what on earth we were going to do with everything that was taken off the fields.

In the event, we still didn’t have an answer to that by the time the arranged meadow cutting weekend arrived!

Actually it was a wonderful weekend. In many ways it felt like we were back in the nineteenth century, raking the cut grasses into rows with our large wooden rakes, all working together on the land. We were so lucky to be able to borrow a heavy weight piece of equipment from the Trust that we walked behind while it drove itself forever onward with a 4 or 5 foot wide cutting blade with a scissor action like a hedge cutter. It made your arms tingle if you were at it for too long, but it was generally pretty efficient. We also had some very kind people who were willing to give up their precious weekend to come and help including two members of the Trusts land management team. It was such a generous thing to do, I could hardly believe that they were prepared to do it. We also borrowed some young men – sons, nephews and their friends who seemed to think nothing of running up the slope of the meadow towing a hippo bag heavy with hay behind them.

By the end of many hours of hard work by up to eleven people at times, by Sunday lunchtime when it started to rain we had the first meadow cut, raked, bagged up and then the bags emptied into a small paddock that is fenced off from the rest of the meadow.

There is now a mountain of hay in that paddock. What to do with now is now the question and one that we are currently looking into. And of course there is the whole second meadow that is almost double the size of the first and for which we have no inclination to go through that again. Perhaps we get a contractor in to deal with it, perhaps we see if we can get some sheep to graze it, perhaps we buy a tractor with a baler? These are also questions that we hope to have answers for shortly 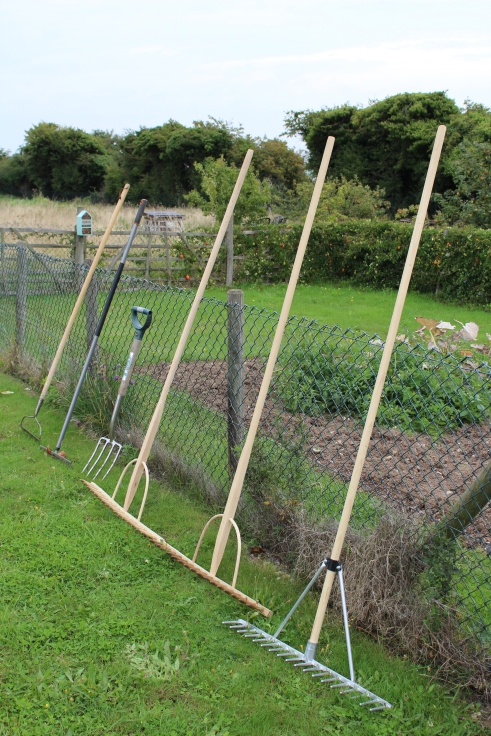 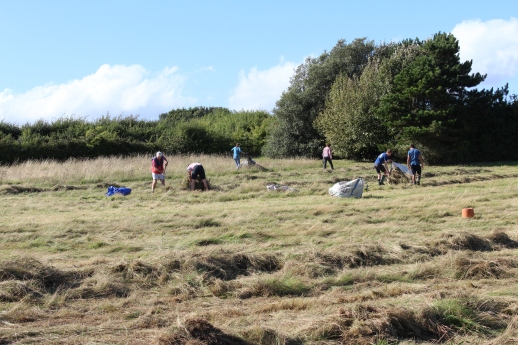 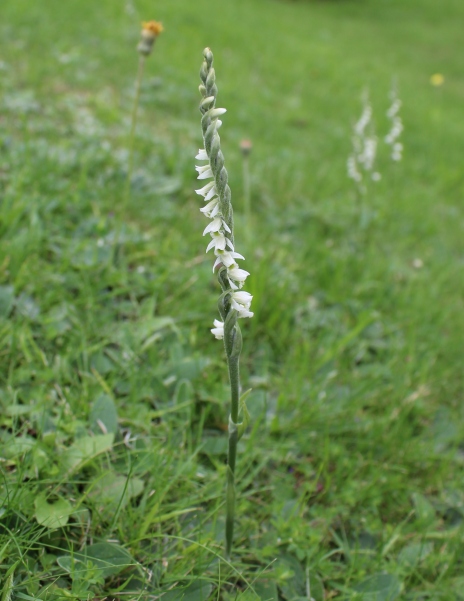 A new Orchid has appeared in the more closely mown grass in the orchard area of the first meadow. Autumn Lady’s Tresses. And its come up in its hundreds. Such delicate beauty.

In the half century or so of my life up to now I had given very little thought to moths other than as a most unwelcome invader of clothes drawers and annoyingly flying into the hall when the front door opens at night. Louise, one of the Kent Wildlife Trust team who came to survey the meadows is a huge enthusiast though and we were delighted when she volunteered to come down and set her moth trap up in the meadows to see what we’d got flying around at night.

There was a feeling of excited anticipation for the morning with the bright glow of the moth trap coming from the meadows that night in late July. We had a huge haul – 32 species of macro moth and many micro species which I think we never did totally get round to identifying all of them. For me, a new passion was born right there and then and we have subsequently bought our own moth trap and had many more moth nights. I try not to be a bore on the subject but sometimes its ever so difficult because some of the moths are quite extraordinary. My favourite so far? Well, the Elephant Hawk Moth has to be a strong contender, the Magpie is another – but the winner is absolutely the Ruby Tiger because it looked really quite ordinary at first until it opened its wings a bit and we were completely surprised by its stunning bright red abdomen underneath.