We had had a busy weekend and so spent a quiet hour in the hide watching birds come down to drink and wash in the pond. 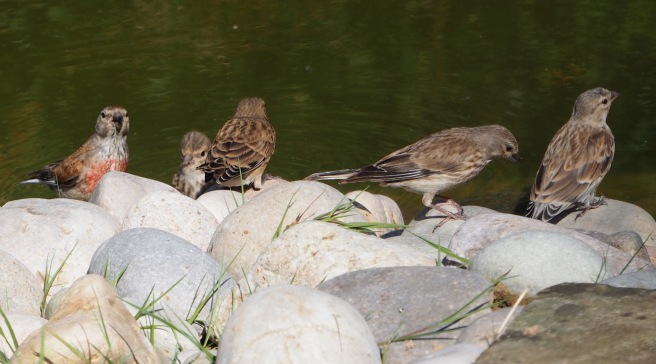 The band of juvenile Long-tailed Tits was there as well:

We also had a warbler come down to drink, but we can’t work out what warbler it is. It has no distinguishing features in order to be able to pin it down other than it has green legs -that’s got to be quite unusual, surely.

I have sent photos of this bird to the bird ringer who comes here. He will know what it it is straight away and I will let you know. UPDATE: apparently its a Reed Warbler and will be just passing through on migration.

So a really relaxing and enjoyable way to spend a quiet hour on a Sunday afternoon. We were pleased by how many birds are using it – its definitely a great new addition to this place.

A new species of dragonfly is patrolling the pond – the Common Darter. 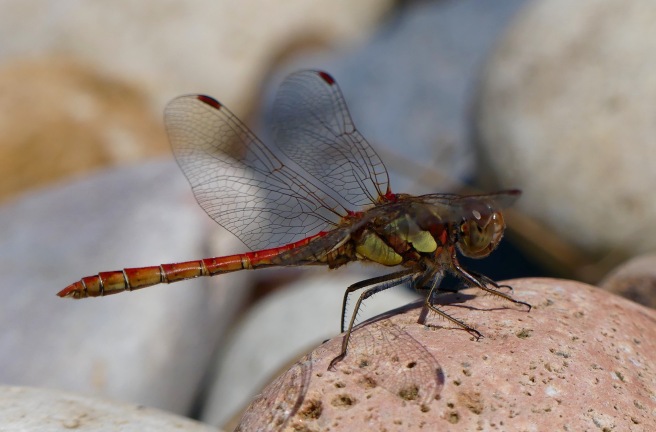 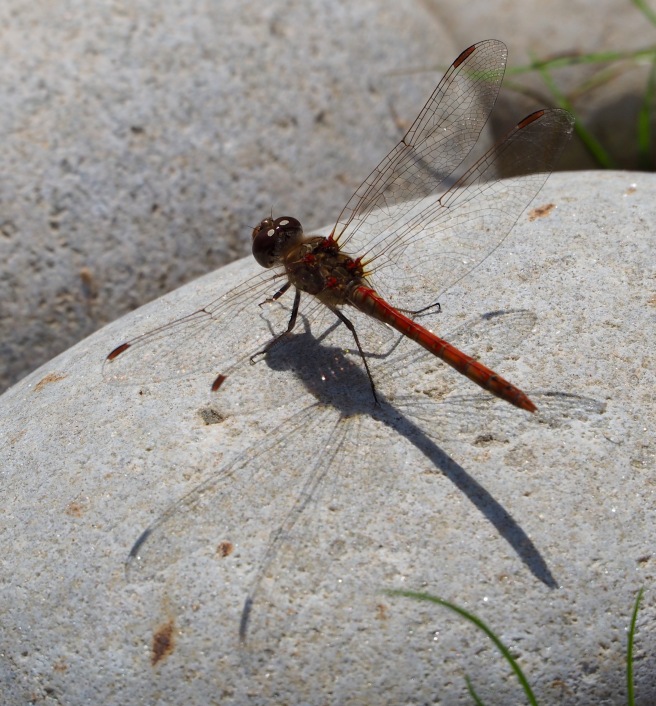 The males are a beautiful red and several were positioned around the pond awaiting the arrival of a female.

And when one arrived, things happened quickly. We were scarcely aware of her before they were locked in an embrace lasting several minutes: 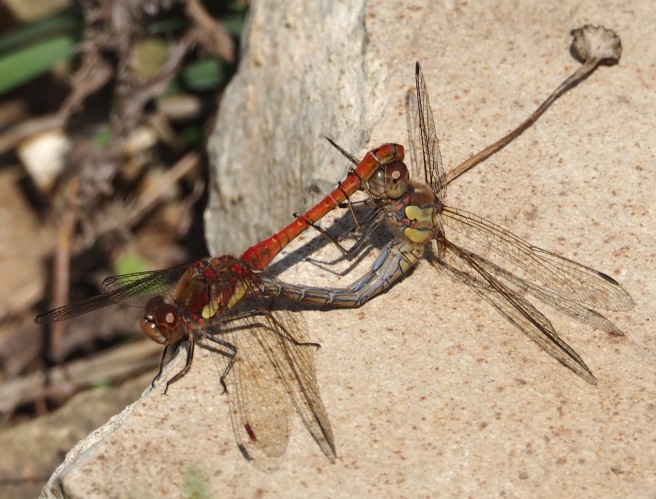 There were several pairings while we were watching.

And then they were off. Somehow they lock together in tandem flying over the pond. The female is repeatedly lowered down and at the lowest point she releases an egg which falls the short extra distance down into the water. 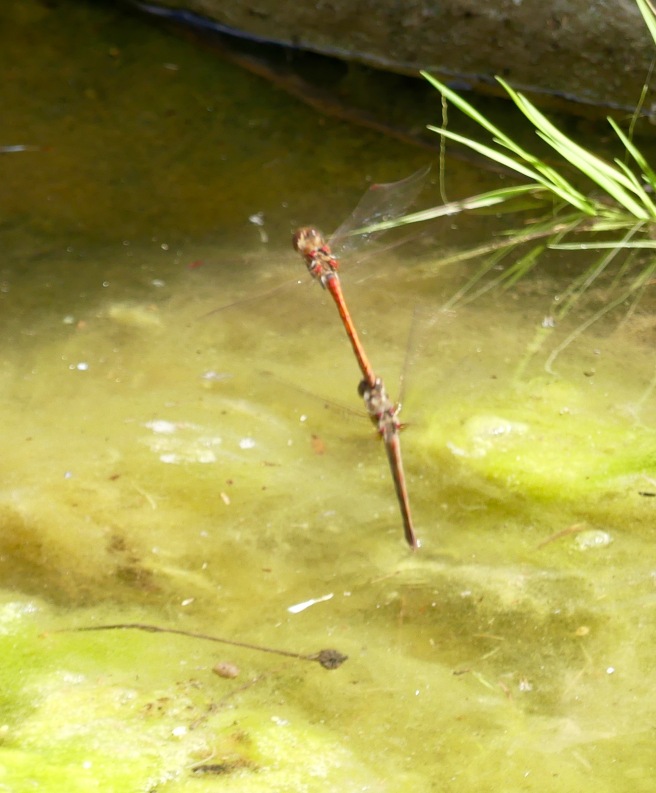 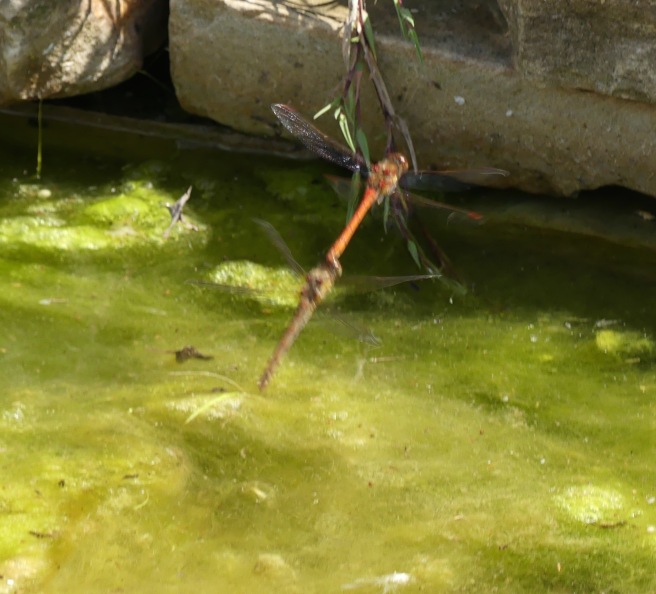 It was quite a marvellous thing (although difficult to photograph)

At the same time a female Emperor Dragonfly was calmly taking her time laying her eggs into the pond.

This pond is 9 months old and we have been enjoying watching it develop. Its now teaming with insect life and we are looking forward to seeing what comes next.

Even though I have spent my life being cowardly of spiders, I have to grudgingly admire this Wasp Spider that we found low in the grasses today. She is magnificent:

This is quite a large spider, about 3cm across, and she had caught something and wrapped it up in silk. Primarily they are trying to catch grasshoppers but perhaps her catch today is too small to be that. Here is a photo of her from the other side of the web which more clearly shows her catch:

I just hope that her catch is not her mate because I’m afraid they do often eat them. The males are very small in comparison to the females:

We didn’t see the male spider today (…perhaps that actually is him wrapped up in the silk) but apparently males can often be seen waiting at the edges of the web until the female sheds her skin. Her jaws will be soft after this for a while and he has a little window of opportunity to mate with her then and live to tell the tale.

Kicking a ball around for the dog in the second meadow yesterday flushed an adult Skylark up into the air. We do see Skylarks coming down into the grass of the meadows to feed – they eat mainly grass seeds but also other seeds and beetles, flies and spiders all of which we’ve got in abundance. Also, the meadows run alongside agricultural fields where they normally nest.

But this time was different though because another bird then came up from the same spot as the adult Skylark. A weak flyer who rose a short distance and quickly came down close to the original area.

Its a juvenile Skylark. It was too weak a flyer to have got there from another field – so we can be fairly certain that we have Skylarks nesting here.

The population of Skylarks has crashed, its really tragic. 75% between 1972 and 1996 and still declining. The problem is thought to be those jolly old farmers again who now plant their crops in the Autumn rather than the Spring. This means, come the Spring, the crops are too lushly growing to suit these birds. They try to nest in the tractor tracks within the field but the nests get trashed when the tractors come along to spray and predators find them as they trot along the tracks.

Of course, there is the horrible thought that our meadows were cut by this time last year, no doubt destroying all sorts of precious stuff in the process. Oh, its so difficult working out when to get them cut, too many conflicting reasons to do it early or late. However, the most powerful argument of all is to get them cut in September because we cannot find anyone who can cut them any earlier, everyone is too busy getting in the harvest.

Last weekend, we had an agricultural contractor come round to the meadows to see if he could take them on. He thinks he has got time to do them in September, but he doesn’t know what to do with the bales. They will no longer be nutritious enough to feed animals – just dried up grass stalks and seed heads by then. He has gone away to think about it and so fingers crossed for that.

We, in the meantime, will be thinking what we can do next year to make life a little easier for any Skylarks that want to nest here. Maybe temporarily fencing off an area to keep us out and the dog out and putting off foxes and badgers going in there quite so much? Thats a possibility and something to take advice on and mull over during the winter.

Here we are, the first week in August, and apparently the Warblers are on the move.

Its obviously particularly valuable to ring migrating birds, and this process started in earnest this morning in the meadows. Not by us, I hasten to add, but by someone who is an expert and accredited to do so.

23 birds caught, ringed, measured, inspected and safely released. This included 4 species of Warbler, all of whom were juvenile birds and will be passing through on their journey to Africa. They fly at night and feed during the day wherever they find themselves. Apparently here they will be feasting on the blackberries, turning all that lovely sugar into fat to fuel their journey.

One of these species, the Garden Warbler, was not only a new spot for the meadows (..species number 51 on my meadow list), but was also one I had never knowingly seen before:

This is all rather exciting because now is just the beginning of the migration season which will go on right until the end of October. There is a possibility of many species being ringed that are ordinarily difficult to see thus providing the perfect opportunity to see them up close and personal. Yellow Browed Warbler and Pallas’ Warbler are two names that have been enticingly mentioned and ones for which I will be keeping my fingers crossed.