The one-eyed vixen has brought out her cub: 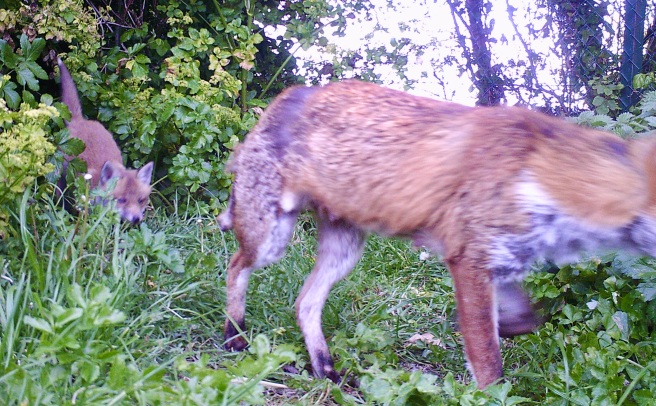 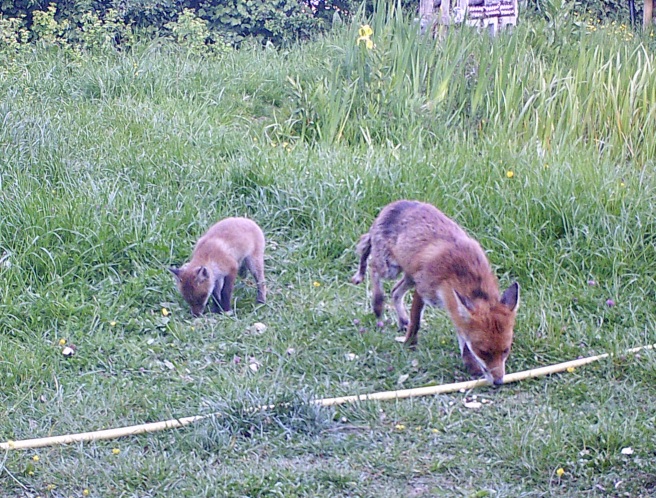 Over the past few weeks, we have been treating her for mange but it is a slow process and I was worried that her cub would have caught mange from her before the medicine had had a chance to work. But, as it turns out, the cub is perfect:

Or are there two cubs:

I haven’t managed to properly work this out yet but I think the other cub might have a different mother.

The one-eyed vixen still looks pretty tatty even after all this time of putting out medicated jam sandwiches for her. She hasn’t got any worse but there are no signs of her fur growing back yet. However, there was another mangey Fox that we were also targeting who had a very ropey tail. Here he is in mid April: 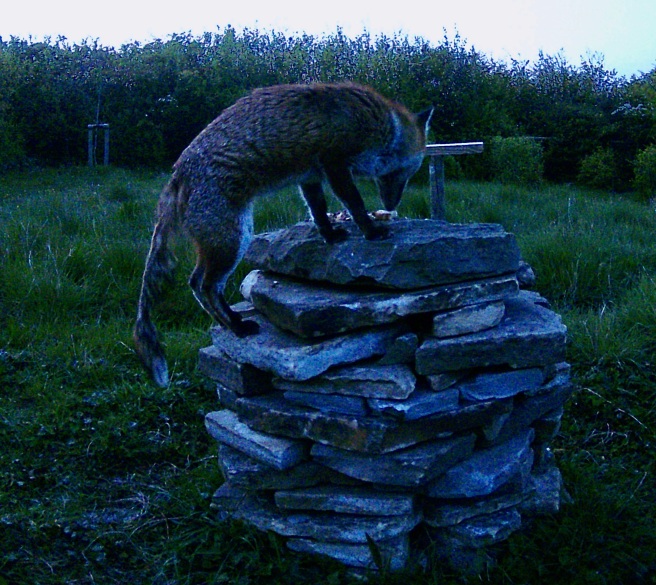 Delighted to see how well he is doing now with fur growing back along the length of his tail. And lovely to feel like we have made a bit of a difference. 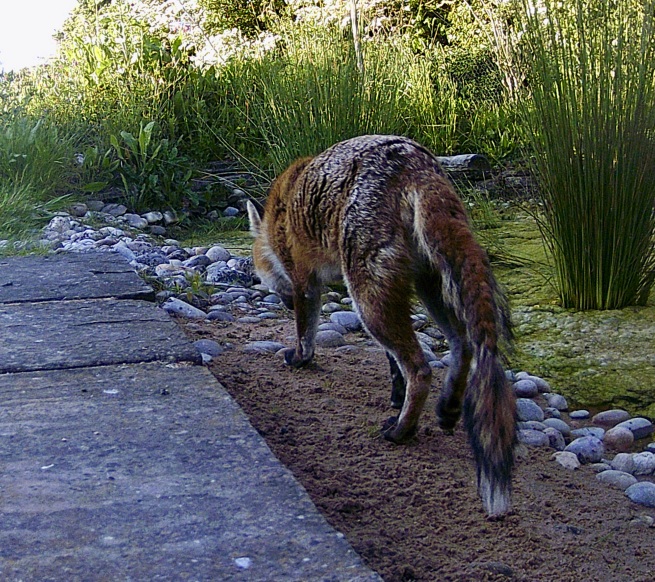 With all these young animals, there are many more takers for the peanuts at dusk: 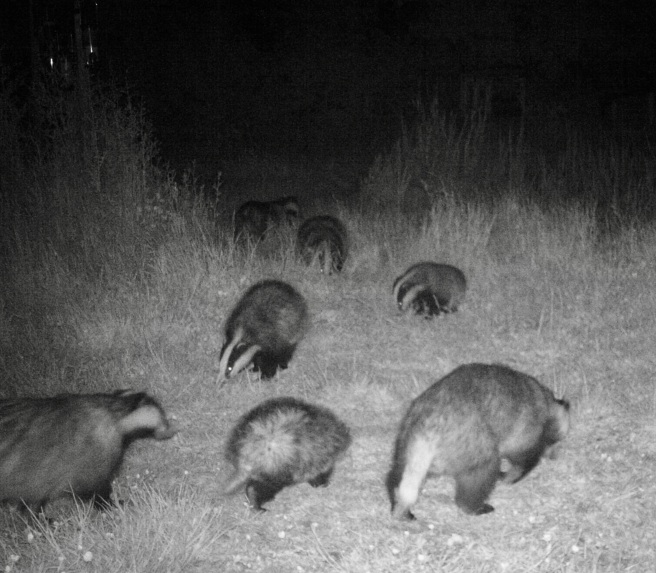 When did we last have rain? It has been another tremendously dry spring and the ground is very hard and difficult to dig for worms in. At this point, the mother Badgers will be gradually weaning their cubs and withdrawing their milk so that the cubs have  to learn how to feed themselves. I read that, in years of spring drought, there is a great death toll amongst the young Badgers who are not strong enough and experienced enough to get to the worms that make up 70% of their diet and they simply starve.

We will do what we can to help by increasing the amount of peanuts that go out each evening until it next rains but currently there is no rain to be seen in the forecast. This does mean, of course, that we are getting through a tremendous amount of peanuts. We buy all our bird food from Vine House Farm – a farm in Lincolnshire that manages to be extremely wildlife friendly whilst still making a profit with their farming of bird food. Nicholas Watts showed a group of us from Sandwich Bay Bird Observatory round his farm a few years ago and we were extremely impressed with what he is achieving there. He trials conservation ideas out on the farm and shares the results with other farmers.

Although we rarely see Buzzards here, shockingly there was a dead one lying on the grass one morning.

The bird ringer came up to have a look at it and reported that it had broken its neck, presumably by accidentally flying into something. We put it onto the cliff path for the Foxes: 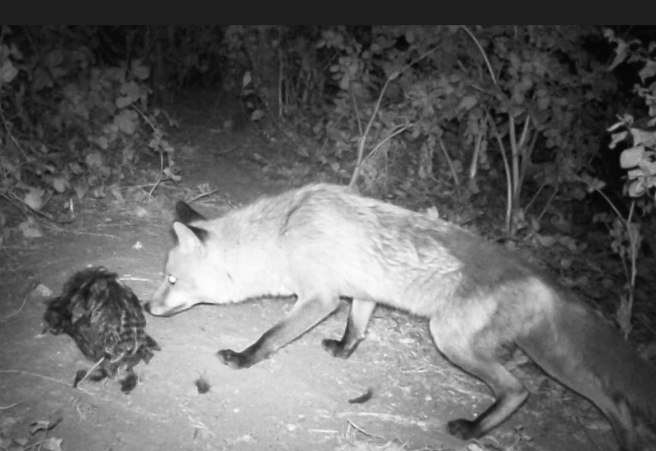 The bird ringer has been doing some ringing here as well, now that The British Trust for Ornithology are once again allowing ringing outside one’s own garden. 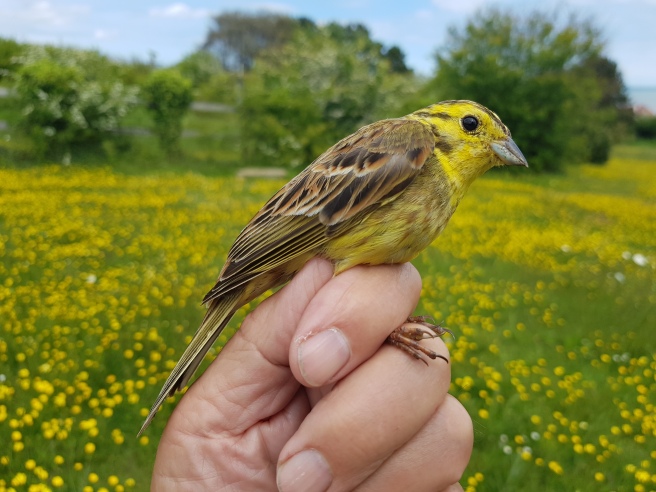 He also caught two Whitethroat, a male and a female. The female had a brood pouch indicating that she was nesting:

The female Whitethroat was born this time last year. She has then flown all the way to Africa and back and still has the same feathers that she grew whilst in the nest. The middle tail feathers are practically bare by this stage: 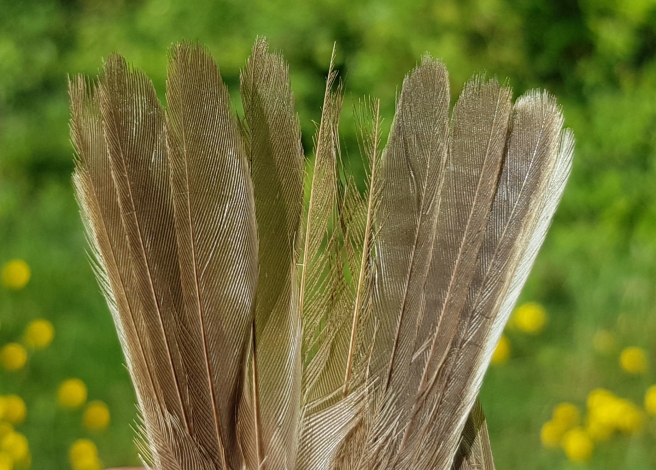 She now needs to raise her family and get them fledged and away and then she can finally moult and clothe herself in some more efficient new feathers to return to Africa later this summer.

At this time of year, the easiest way to sex Starlings is by their eye ring. The chestnut outer ring shows that this is a female. A male eye would be all black.

This Blackbird has been born this year. It is nice to discover that some nests manage to stay under the radar of the ever-watchful scrutiny of the Magpies and Crows.

When I initially looked at this photo below, I thought that the Herring Gull was sorting out our over-abundant Magpie problem but then I saw that, of course, I was mistaken.

We have also been seeing baby Robins and, in the last couple of days, a large number of recently fledged Starlings have appeared. The adult Starlings will now go straight on to having another brood whilst the offspring of the first broods will hang around in a gang together, working the meadows for invertebrates in the soil.

Brown Argus Butterflies have made their first appearance of the year in the meadows:

They are very small Butterflies but not as tiny as the Small Blue:

I thought I was seeing a Spider with a blue abdomen crawling in the soil and I ran for my camera:

We caught it in a jam jar and discovered that actually it is a female Wolf Spider (Pardosa monticola or palustris) carrying her egg sac:

The Oxeye Daisies are starting to come out in the meadows. They seem to be especially abundant this year: 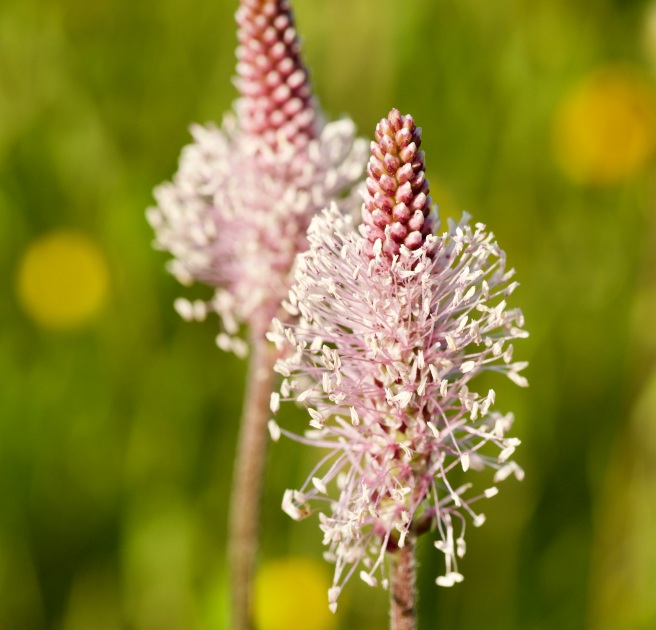 A couple of weeks ago, I reported to you that a Roe Deer had visited the wood. I now know I have misidentified this very large Deer:

We are blessed with like-minded neighbouring wood-owners and this Deer has also been in their wood. They have images of it from behind and calculated the height to its shoulders to be around 1 metre by seeing how high it came up a tree. The upshot is that it seems that this is a Red Deer, which is surprise because their distribution map doesn’t show them in East Kent.

The rump of a Roe Deer, its smaller size and its head shape are all very different.

We might not often see Buzzards in the meadows but we frequently see them in the wood: 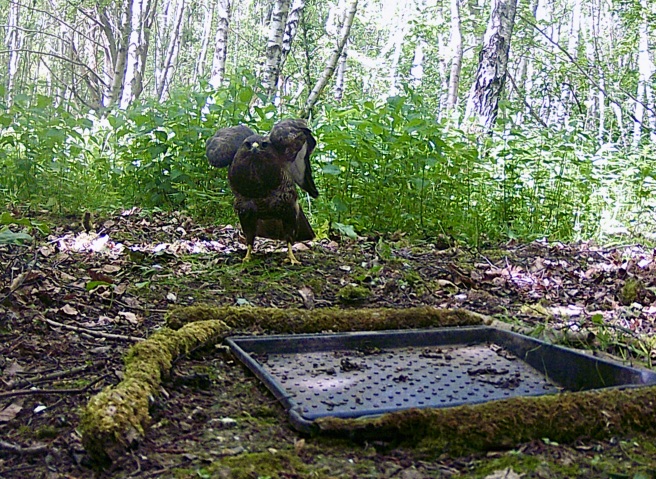 Last year, a pair of beautiful Bullfinch nested in the wood and came to this pond every day, in due course also bringing their three fledglings. I had hoped that they would be back again this year and perhaps these photos mean that they are:

I hope to get better images of this pair as the summer progresses. We are also trying to improve the photos taken at the Green Woodpeckers nest:

Although the Great Spotted Woodpecker from time to time comes to peer into the hole, I don’t think that they are nesting in the same tree. But once the young start calling, they are so noisy and insistent that we should be able to pin down what’s going on.

Now that the nights are starting to warm up, I am getting much larger catches of Moths in the Moth trap and it takes quite a time the next morning to go through and identify them all. Last year I really didn’t have the space in my life to do this and ended up cherry picking the easy ones. This year, however, improving my moth recognition skills is exactly what I should be doing whilst locked down. Actually I am finding it incredibly satisfying to put the time in and get them correctly recorded. So, this year, for the first time, I will be proudly submitting my results to the County Moth Recorder – a small positive to come out of a terrible time.