It is always very satisfying to find a jigsaw piece that had previously been missing and slot it into its proper place in the puzzle. Mason Bees build walls of mud in their nests to create cells, into which they deposit a pile of pollen and lay a single egg. We have seen them gathering and carrying the pollen but, up until now, we have never been able to establish where they are getting their mud from.

There are lots of them at work in the orchard and the hedgerows, collecting pollen from the flowers. Rather than carrying the pollen in baskets on their legs like Honey Bees and Bumble Bees, they hold the pollen on their tummies. This is a very inefficient way of doing things and pollen gets knocked off every time they visit another flower – which is what makes them fantastic pollinators, of course. Apparently it takes 20,000 Honey Bees to pollinate an acre of fruit trees but just 250 Mason Bees. What pollination heavy-weights they are.

But it was a mystery where they were getting the soil from to make the mud walls. It needs to be damp and so we had looked at the edges of the ponds to see if they are going there but they didn’t seem to be. Now – and this is where our breakthrough comes –  for the first time, the Badgers have dug a tunnel that opens into the meadows rather than onto the cliff and, on a warm, sunny afternoon this week, I noticed that Bees were buzzing in down the tunnel. 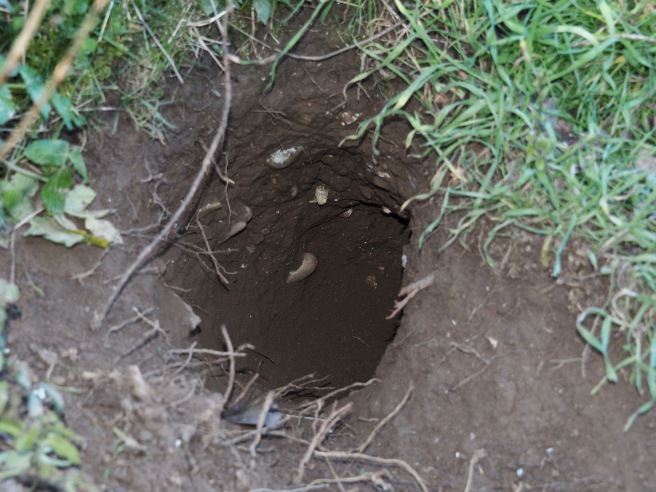 Getting down immediately onto my knees and peering in, sure enough, I saw that Red Mason Bees were flying about a foot down where it was cool, shady and moist and gathering up balls of soil.

Such a revelation. It won’t only be Badger tunnels that they are using but we now know the sort of soil that they are looking for.

There is quite a worrying size disparity between the young Badgers.

The single cub, born to the younger, inexperienced mother is not growing like the triplets are.

Not only is it very small compared to the triplets, it is also still being dragged around by its mother several times a night:

It all feels not quite right but there is nothing we can do. Everything might anyway be fine – the young Badger certainly remains very lively and is playing well with the other cubs.

The male, Scarface, is interacting with the triplets below for the first time that we have seen. He must have come up under the fence and happened upon them by accident.

The mother comes forward and gives him a sharp rebuke and he immediately fades away backwards under the fence. He knows he is not allowed around the cubs at this stage and he completely accepts the telling off.

It has been cold and breezy for most of the week and, in particular, bitter north-easterly winds gusting to 55mph blew solidly over Sunday and Monday. One of the Seatrade vessels sheltered alongside us on Monday – this is Pacific Reefer, a refrigerated cargo ship, that brings Caribbean fruits once a week into Dover. She carries bananas and pineapple below deck and containers of avocados, mangos, papayas, grapes, pomegranates and melons on the deck. She left Paita in Peru on 26th April, navigated her way through the Panama Canal, made her way across the Atlantic Ocean and arrived here in a gale on 11th May, 15 days later.

Another ship that caught our attention this week was the Sky Princess, travelling from Rotterdam to Limassol in Cyprus. This cruise ship was only launched in October 2019 and can carry 3,660 guests and 1,346 crew and should have a 3 star Michelin chef on board. She did manage to get some Caribbean cruising in over the winter before all cruises were cancelled until further notice. I wonder how many people there are currently on board? 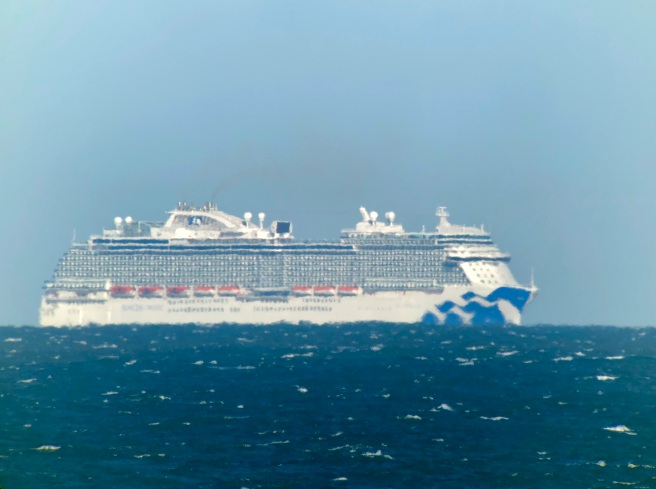 From time to time, however, the winds dropped and we heaved sighs of relief.  Here are some of the things that have been going on:

Like Red Mason Bees, Moths are also very important pollinators, although often overlooked by us humans since they mostly visit the flowers in the dark. Their furry bodies transfer the pollen around really nicely.

Although this bird below might look like it is a miserable victim of some drowning accident, regular readers will know very well that this is a perfectly healthy Green Woodpecker rubbing itself in sand after a bath.

Although Green Woodpeckers are definitely the winners when it comes to extreme bathing, to my mind Jays come second. Here is one from the wood:

This Song Thrush was gathering a lot of nesting material from around the pond area:

A Buzzard has been hunting in this spot often over the past few weeks. I have had a look to see if I can see anything particularly interesting there, but found nothing.

There are not a lot of Foxes in the wood but this one looks very healthy with a fantastic tail: 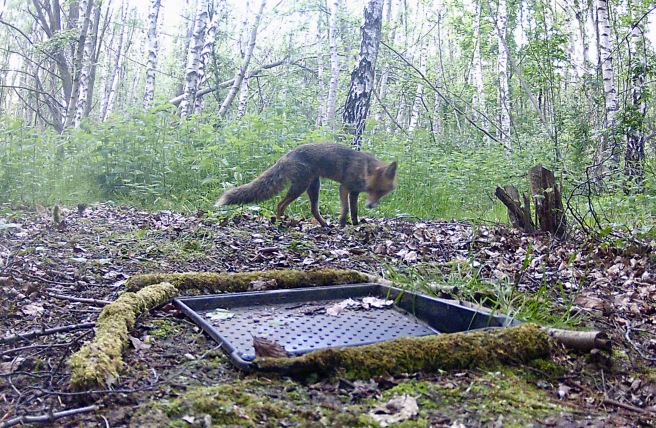 Here it is with prey – looks like a bird to me. 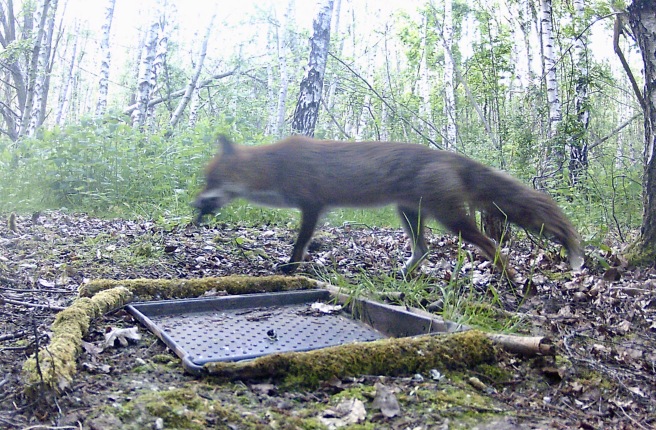 We have kept the camera on a pole looking at the Green Woodpecker nest:

There is now a second camera on a pole hopefully looking at two other holes in the same tree to see if either of them are also being used this year. I will report back after our next visit.

In the regeneration area, the Guelder Rose trees (Viburnum opulus) are under attack:

These are the larvae of the Viburnum Beetle, Pyrrhalta viburni. A native British Beetle but occurring here in numbers such that the leaves are being reduced to lacework. Not surprisingly this is seen as a garden pest – no gardener would want this happening to their Viburnums.

I couldn’t find a single Guelder Rose that was unaffected. Hopefully the trees will grow more leaves once these larvae have pupated, but we will have to wait and see.

If I had any ability at all to paint, I would love to try to capture the drama and movement onto canvas of this last photo below. It is a really interesting composition and such a painting would look great on our wall.