This year, the camera is in a slightly different position but it is clearly the same hole that is being used by the Green Woodpeckers. I didn’t know they reused the holes of other species like that:

Young Squirrels, with their insubstantial tails, are now out and about on their own in the wood and how very sweet they are: 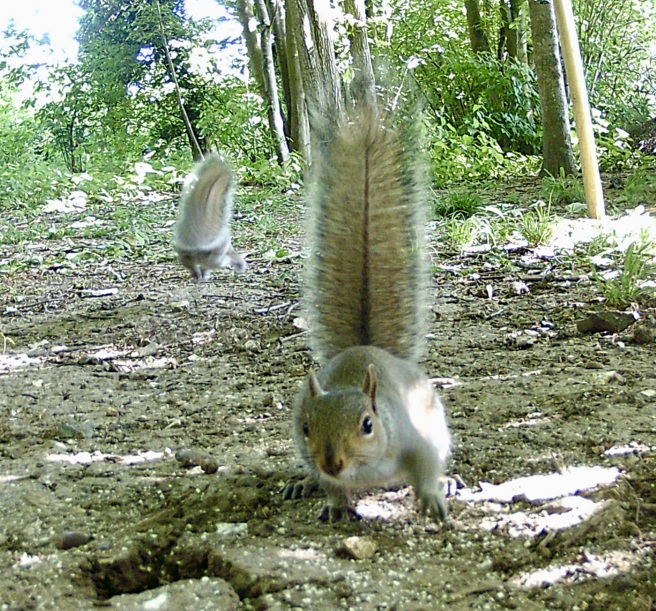 The peace and solitude to be found in the wood is, now more than ever, a thing to be treasured. We stood quietly for a while amongst the Ferns watching the Blue Tits working in the tops of the Birches, seeking out insects with which to feed their young. We think all twelve of the small boxes that we have put up now have nests with hungry families within. We shall be putting more up this coming autumn.

With the lockdown rules now slightly eased, we met up with one of our children in the wood this week. It was the first time that we had seen any of our children for months and months and it felt like a small but significant step forwards. Here we are, celebrating our reunion, with some delicious pink champagne, pandemic style, whilst socially distanced in the wood.

Back in the meadows, the ponds are really interesting at this time of year. 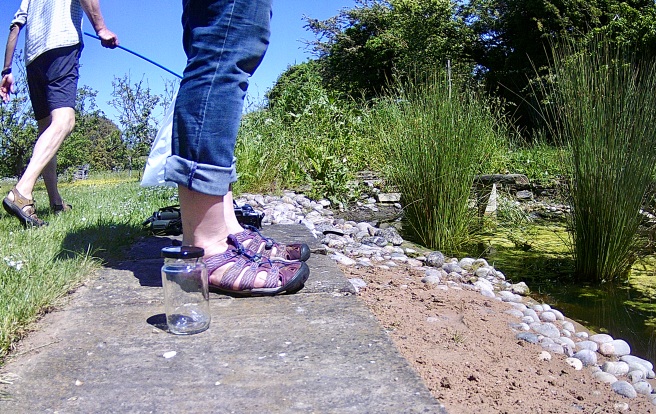 For several years, the late May Bank Holiday has only meant one thing for us –  Emperor Emergence time. Up to a hundred larvae would climb up the reeds on a warm, still evening and transform themselves into Britain’s largest Dragonfly, the magnificent Emperor. But last year, and this year as well it seems, there have only been a handful of them emerging.

The ecosystems in our ponds are maturing and so may no longer suit Emperors so well who are pioneers of new ponds.

Damselflies are also very busy at this time of year.

For all the many thousands of Tadpoles that hatched into the ponds, very few still seem to be around. But those that are to be seen are now very much larger and starting to develop back legs: 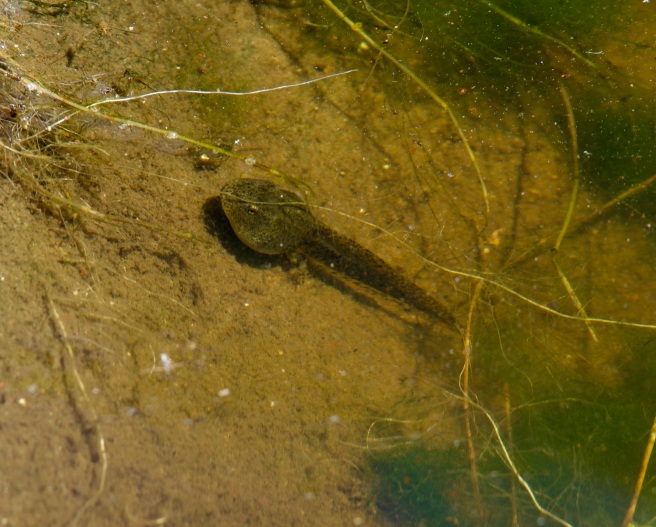 Various Dragonfly larvae of all different sizes are a prominent feature of the life in our ponds. We pulled some blanket weed from the hide pond and we kept having to extricate these and return them to the waters.

This is interesting – a Caddis Fly larval case, probably Limnephilus flavicornis. The larva has cut pieces of plant material  – all nicely to the same length – and used glue to stick these along with sand and other bits from the pond to form a hard and portable house for itself.

This next photo from the internet is a different species of Caddis Fly but gives the idea of how the larva would use its house.

While we were poking around in the ponds, something thrashing around wildly in the grass beside us caught our attention. It was this: 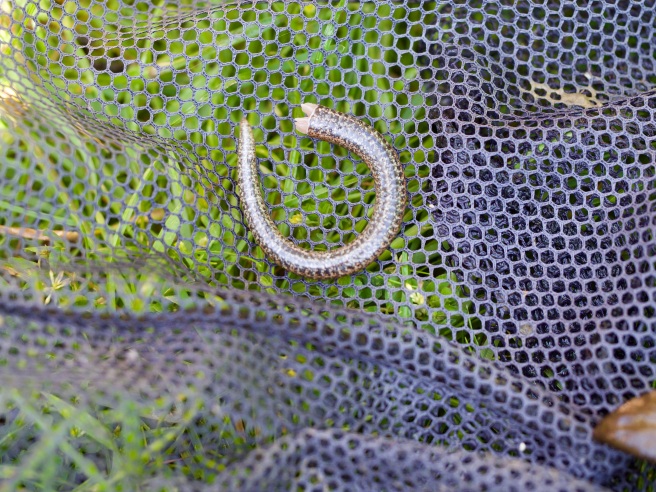 When Slow Worms are threatened by a predator, they can discard their tails which keep moving and hopefully cause a sufficient diversion to enable the front of the animal to escape. I knew this happened but I had no idea that there was so much movement involved. It was really quite unnerving to see something without a head moving around quite so much.

So much about the natural world is fascinating. How does this moth know that it is green and so needs to find a green trunk to disguise itself on?

This is a very striking-looking Beetle – the Red-headed Cardinal Beetle.

Here she is, the lovely little one-eyed vixen that I have become so fond of this spring.

For the past seven weeks we have been treating her and one other Fox for mange by putting out medicated jam sandwiches at dusk. Although we had seen fur growing back on the tail of the other Fox, this vixen didn’t seem to be responding so well.  However, in the photo above, it is clear that white fur is now growing at the top of her right thigh. Although still not a pretty sight, her tail also has fewer bare patches as well. 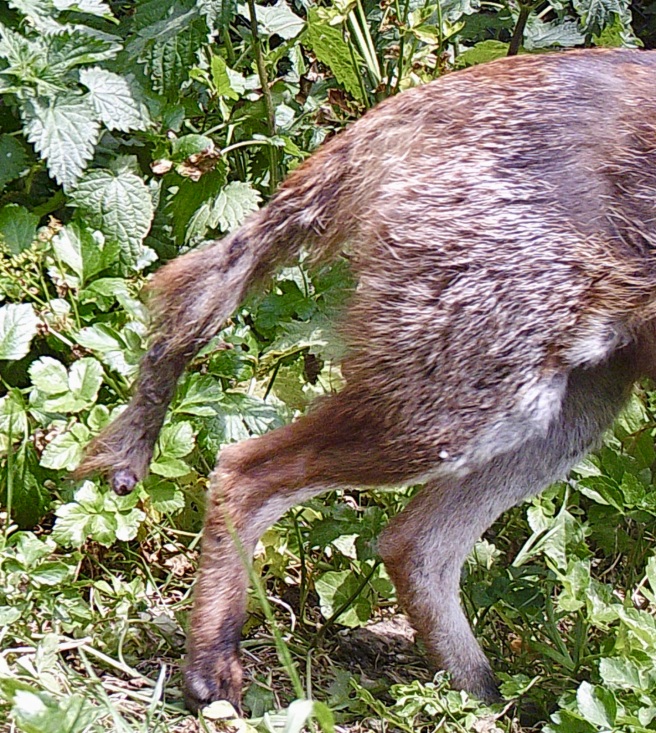 Our job is now done and we can stop putting out the sandwiches. Or can we? Each evening, as I set out on my walk to dish out the sandwiches and peanuts, two beautiful Foxes have started waiting to waylay me along my route and I always throw them some of the bread. I can’t really remember now how this started, but I have built up a certain level of expectation in them and I hate the thought of them waiting there patiently for me and I do not arrive.

I have decided to continue with the sandwiches, albeit now non-medicated. I remember, back in the days when we still went on holidays, how very stressful it was going away from these meadows  – arranging cover to refill the bird feeders, put out the peanuts, water the allotment. Foxes expecting sandwiches at dusk will surely only increase that pre-holiday stress but I will cross that bridge when I come to it and not think of it now.

Meanwhile, the Badgers are enjoying the peanuts. 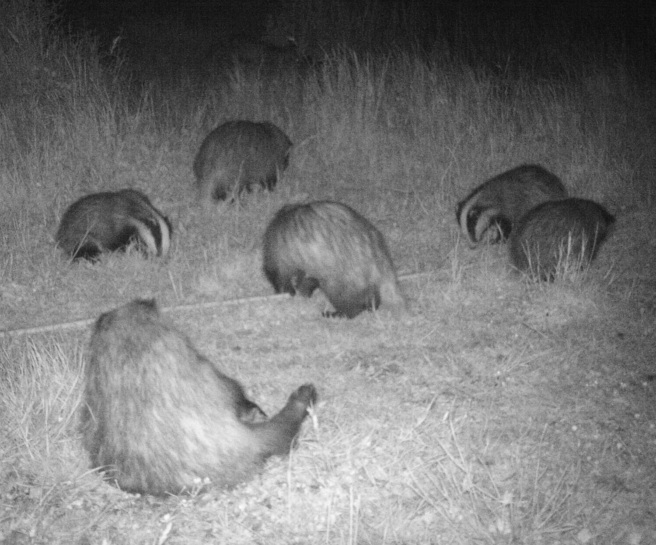 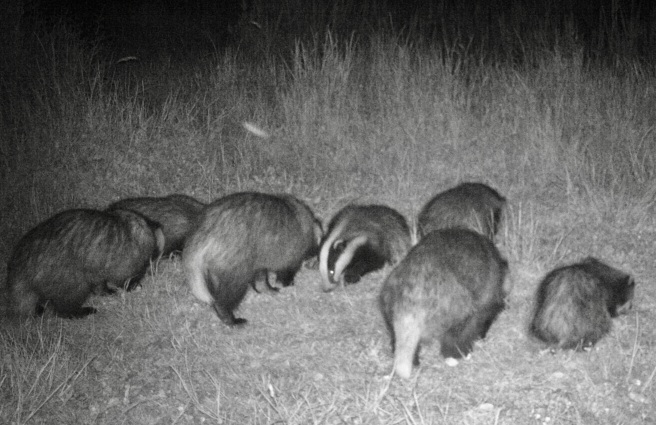 Here they are having some companionable family time at the sett:

There is still a flock of Starlings rising and falling in the meadows:

A lot of this group are youngsters: 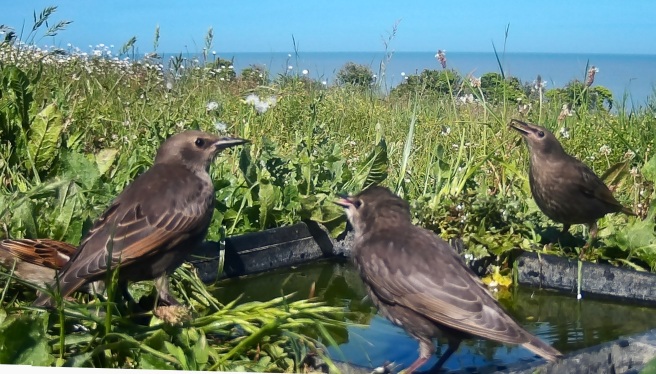 This Crow came in with a Crab claw, perhaps trying to soften it in the water to make it easier to eat. I can’t imagine that this worked.

We are yet to see a Turtle Dove here, but are delighted that a pair of Grey Partridge are back. They haven’t posed in front of the trail cameras for us but the cameras have captured some other interesting photos this week:

The Buttercups are going over now and it is the turn of the Oxeye Daisies to have their moment:

Never before have we lavished so much time and attention on the allotment: 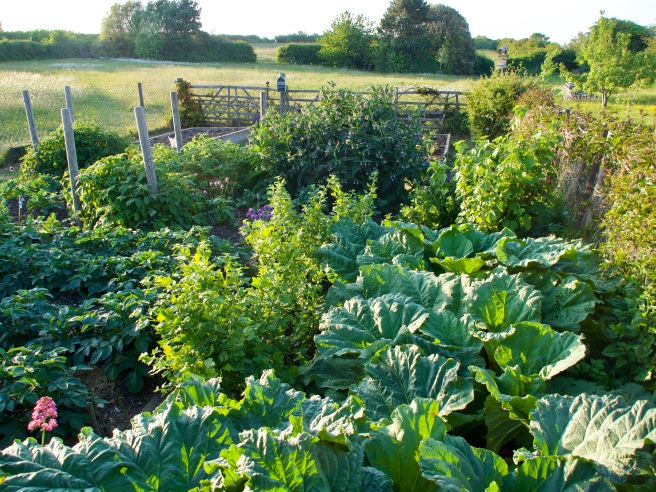 Swathes of Salad Burnet in the meadows are going to seed:

I think their flower heads look like tasselled lampshades from the high Victorian era:

Broomrape (Orobanche minor) is parasitic on Clover and therefore doesn’t need green chlorophyll to photosynthesise and make its own food. They are attached to the host by underground haustoria which grab nutrients from the Clover and transfer them back to the Broomrape.

Common Broomrape can be a variety of different colours – we have a patch of really quite yellow stems of it in the first meadow:

The wild Honeysuckle is out in bloom creating the most fantastic pockets of fragrance as we walk round the meadows. Good for checking that one hasn’t lost one’s sense of smell.

The Hoary Plantain is one of the highlights for me at the moment: 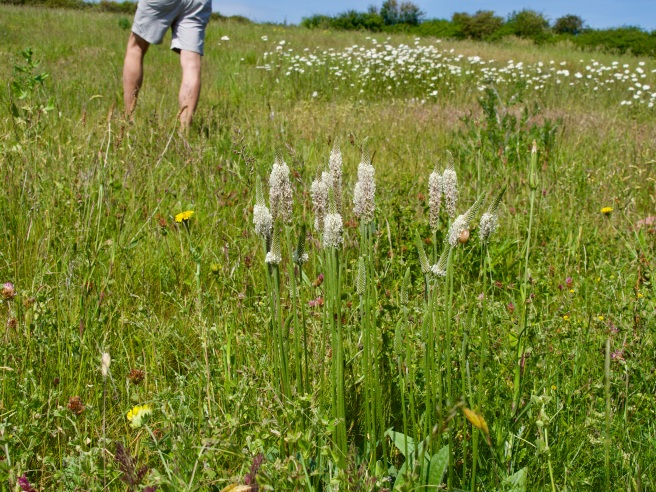 I am not sure if this last photo really captures how surreal this was: on this particular afternoon, the sea merged invisibly into the sky and this ferry appeared to be flying through the air into Dover: