These are anxious times and its difficult not to be glued to the BBC website trying to keep up with the rapidly changing situation. For us, given that we have responsibilities for caring for an older generation, it seems sensible to socially withdraw as much as possible. There are several nature projects outstanding that would be perfect things to get on with whilst in splendid isolation which also provide escapism from a very scary world.

Our coppicing endeavours over the winter have resulted in large piles of wood of various sizes that we now need to do something with.

We are starting to build a circular(ish) compound with dead hedging walls using the brash and will also incorporate some tall poles to string a tarpaulin over to make a temporary roof. We could even see if the dog is prepared to be contained in there for a while, although I suspect she won’t be.

Another thing we wanted to do was to build a second Stag Beetle log stack back in the meadows. The idea is to bury wood underground to slowly rot down which can then be used as food by Beetle larvae, hopefully including the declining Stag Beetle. The People’s Trust for Endangered Species have produced a fact sheet with information on how best to do this, an extract of which is shown below.

The logs should be at least as thick as a human arm. Now that we have the battery-powered chain saw, we have a pile of these larger logs available:

The bird ringer has been back in the meadows and ringed two more Yellowhammer:

Telling the difference between the male and the female in these young birds was tricky, hinging on the colour of the feather shaft and how far down the brown colouring reached on the head feathers. Not something that would be possible when just observing the bird through a pair of binoculars.

This is a very tatty looking young Dunnock: 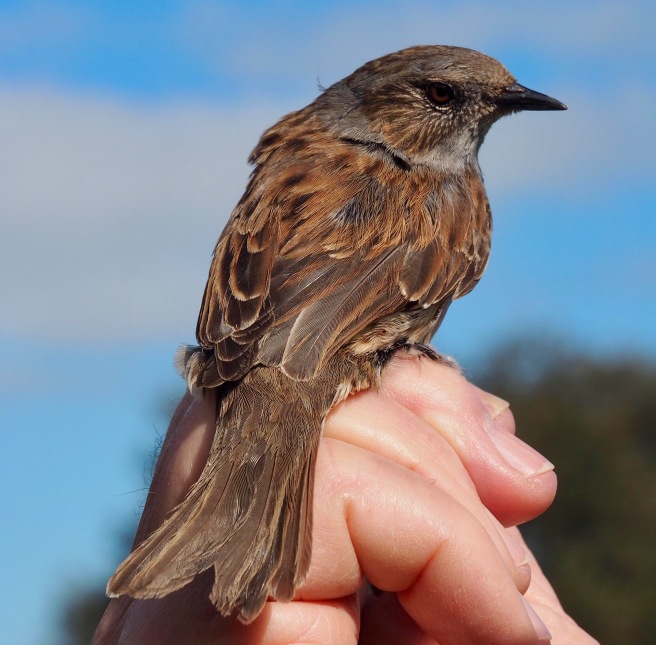 Adult birds will moult and get new feathers once they have finished raising their young at the end of each summer. However, young birds born in the spring with fresh new feathers, will not moult again that same summer. Therefore, by the next summer, their feathers are nearly a year and a half old by the time of their first moult. This is why this young bird is looking so dishevelled at this point- its feathers are so old and yet it is still just about to embark on raising a family.

I am seeing this Fox on the cameras a lot: 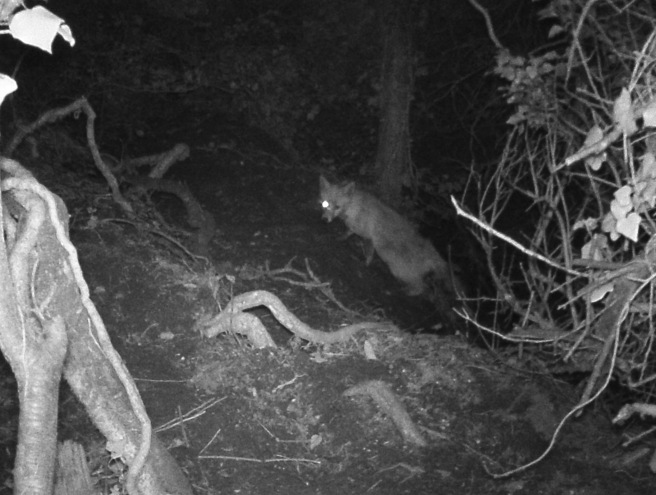 It gave me a shock at first since it seemed that her right eye was scarily lit up. But then I realised that actually both her eyes should be lit up by the infra-red and so the explanation is probably that she has lost her left eye. 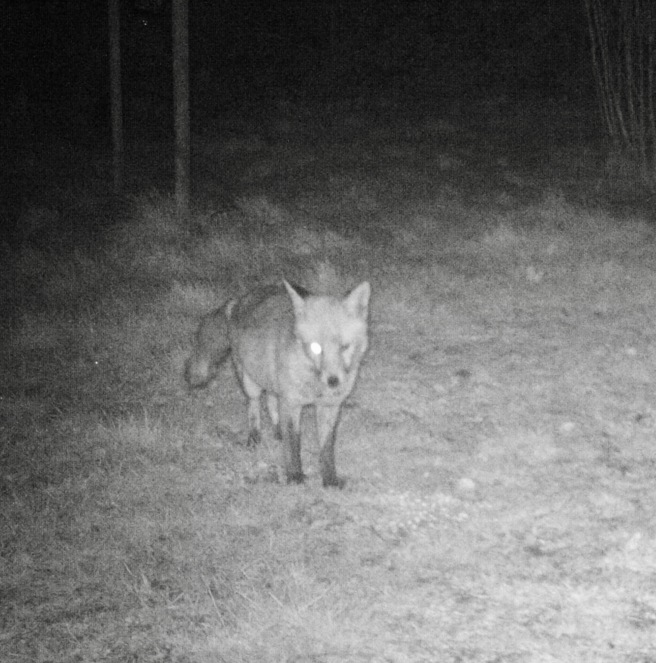 Here she is again and it becomes obvious that she is also heavily pregnant:

At the end of January, this Fox had a wound to his cheek: 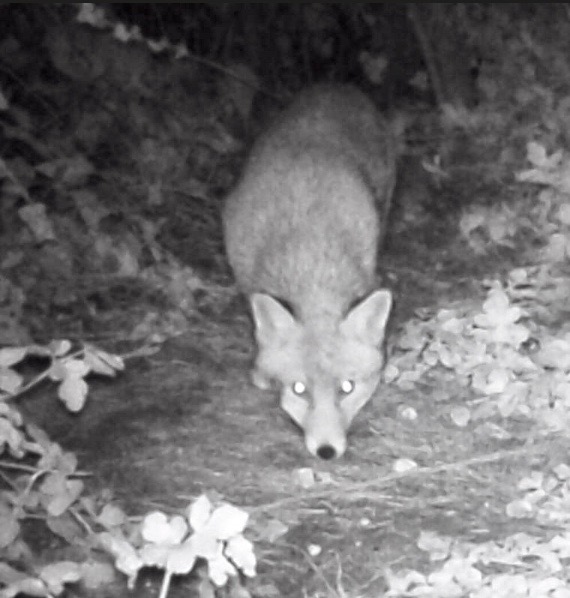 Happily, he has survived this injury because here he is now, with the scabs falling off, taking some fur with them, so that is a happy bit of Fox news.

Not all of our Foxes are carrying injuries though. Mostly they look in good condition such as this lovely, healthy one below, surveying the Badger sett:

Magpies have eaten nearly all of the Frogspawn in the wild pond. Having got a taste for it, they were also having a go at the spawn in the hide pond, although that is laid in much deeper water:

However, it was too late because, the next day, the spawn hatched: 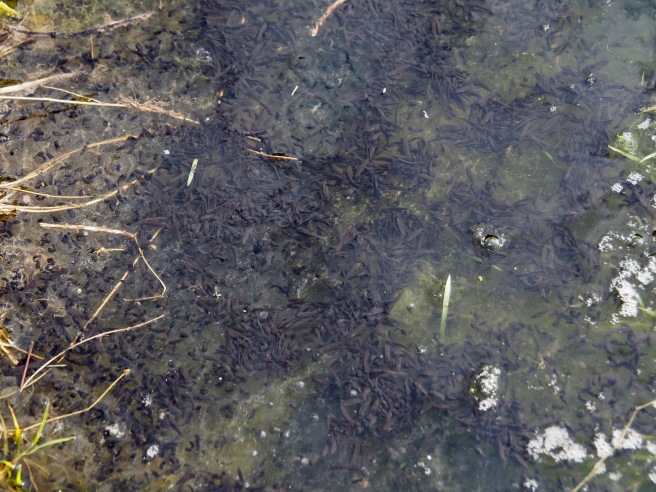 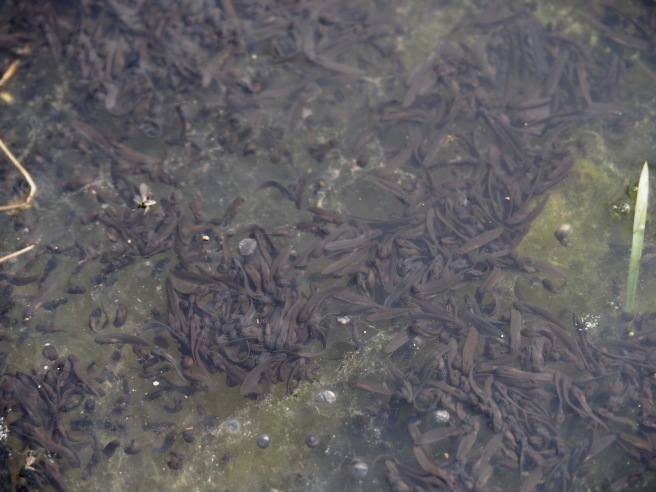 These Tadpoles will shortly be dispersing throughout the pond, where they will be making a nice tasty meal for Dragonfly larvae, Newts and no doubt many other things, a very small percentage eventually becoming Frogs.

The Magpies are still visiting the wild pond even though all the spawn has gone. They are collecting wet mud and reeds for nest building:

Blackbirds as well. It is the female Blackbirds that do all the nest building:

I have been growing on some Horseshoe Vetch in the greenhouse over the winter and now I have just planted it out into the meadows. This is a larval food plant of the Adonis Blue and the Chalk Hill Blue Butterflies  – both rare Butterflies but ones that do live on chalk downland so long as there is Horseshoe Vetch available.

We have seen our first Butterflies of the year in the meadows:

Both of these Butterflies hibernate as adults and so they are very early fliers as a result.

One of the Beech trees in the meadows has a lot of this Lichen, Arthonia radiata, showing black fruiting bodies.

The fruiting bodies are only produced by the fungal partner and the spores get dispersed and germinate but then must quickly form an association with a suitable alga if it is to develop into a Lichen. I find this all completely fascinating and must put aside some time to learn more.

We are still enjoying seeing the awakening Reptiles:

The field alongside the meadows was being harrowed recently and the dog was going bonkers chasing the tractor up and down the field. This involved going over the gate many times. 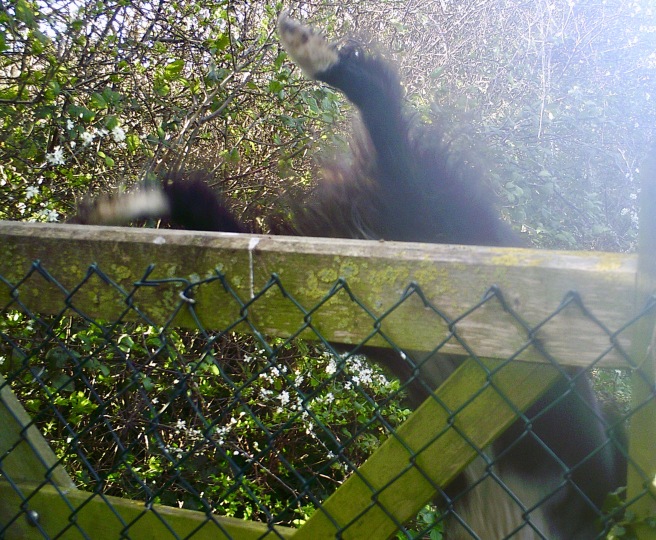 She was exhausted and extremely well exercised.

Moving back to the wood, I have seen my first Mining Bee of the year, resting up on the side of a bird box:

One of these bird boxes has been gnawed by something to make the hole much larger:

We only put this box up in the autumn and so it has not had the chance to ever be occupied and so the gnawing was not to get at something. A bit of a mystery but we suspect Squirrels.

The Tawny is worming in the same spot every night.

We have put a camera on a perch and found that it does use that although I need to reduce the infra red power: 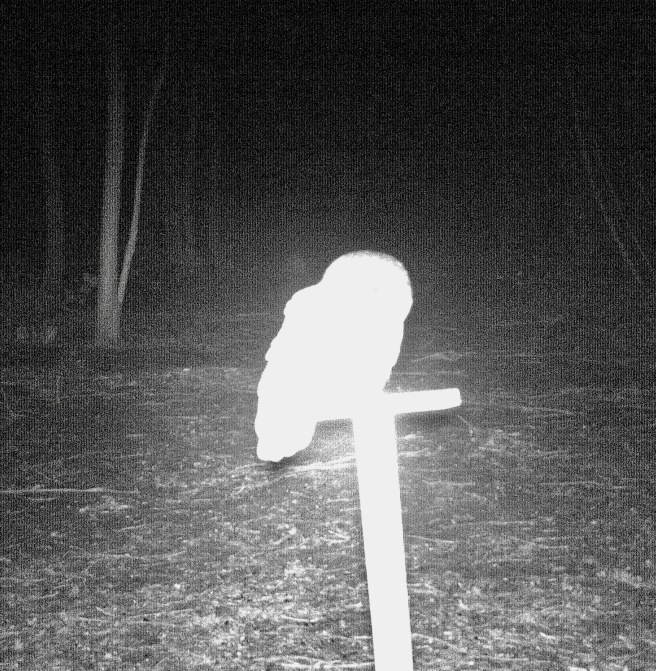 The Redwing are still in the wood. These birds will be on passage, in the process of travelling back to their breeding grounds:

Here are a couple of lovely Jay shots at the same pond: 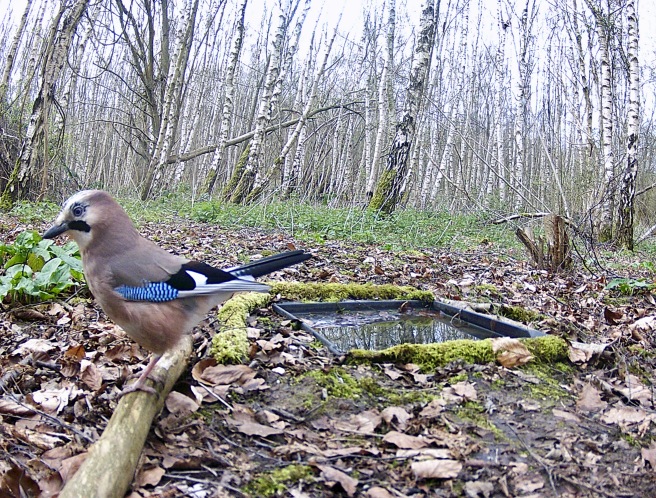 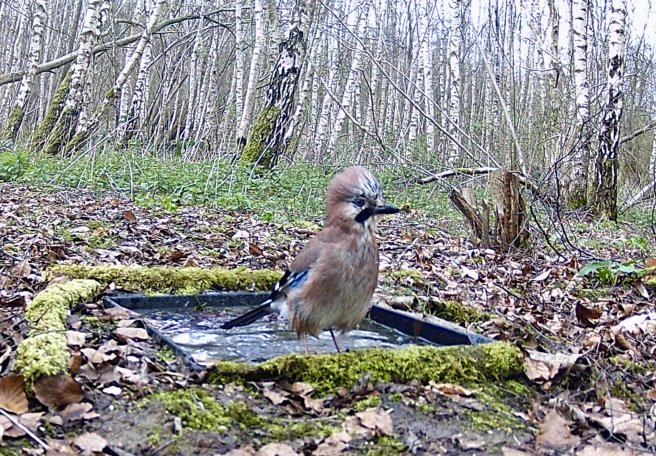 The male Pheasants are displaying to their females by making themselves appear large:

I’m not sure what the females are doing here but there is a lot of it going on:

The final photo for today is some sort of confrontation taking place on the woodland floor but I’m afraid that I can’t tell you why it is happening and who won: 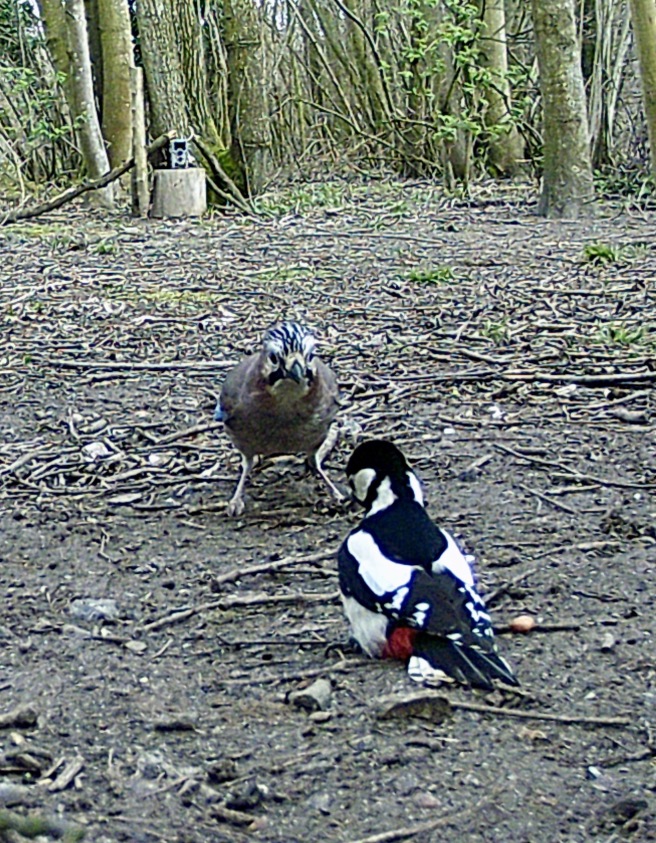