Smugness, as well as being decidedly unattractive in a person, is also most ill-advised since pride so often seems to come before a fall.  I was so pleased that we had built a scarecrow at the wild pond which successfully kept the Heron away, the Frogs then remaining alive to lay masses of lovely frogspawn this year.

We have been away on Dartmoor for a week but have returned to find that all the  Frogspawn has completely disappeared from the wild pond. Unfortunately, it is not because it has hatched – there are no tadpoles to be seen. We did have a camera on the spawn and there were lots of photos Magpies wading into the shallow water:

Frogs do seem to prefer to lay their eggs in the shallowest of water, presumably because that water will be warmer. However, this has meant that these opportunistic birds have been able to get at it and seem to have eaten every single piece.

But the good news is that, at the hide pond, the Frogs laid their spawn into deeper water and this still remains:

In 2018 we saw no Yellowhammers in the meadows. This was such a sadness because land like ours should, by rights, have had many of them singing along the hedgerows. But one of the wildlife highlights of last year was the pair of Yellowhammers feeding on the strip. who then went on to successfully fledge two young by the end of the summer.

This is a rubbish photo, I’m afraid, with dew on the trail camera lens, but there are five Yellowhammer in it. Surely our strategy of putting supplementary food down for these farmland birds is now paying dividends, although obviously I am avoiding any suggestion of smugness so that they don’t immediately disappear. 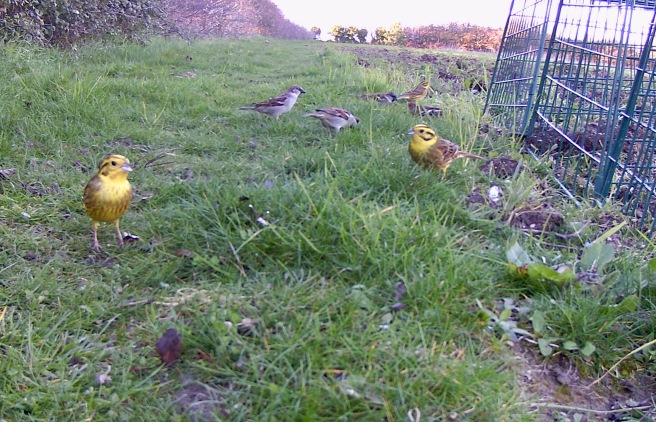 We made arrangements for seed to still go down on the strip while we are away and it is great to see that the birds are still here on our return.

The bird ringer has been ringing in the meadows for the first time this year on a glorious, calm and sunny morning. He caught this young male, born last year:

He also caught this male Linnet, again born last summer, who is just starting to develop his lovely red breast ready for the breeding season ahead:

He saw two Buzzard overhead which is a very unusual sight for here at the coast and a soaring Sparrowhawk:

I have been trying to get photos of the Skylarks that are certainly trying to establish territories in the second meadow. Here are the best I’ve got for you so far:

At this time of year there are very few insects around, but we did see this Fly with a yellow furry abdomen feeding on the nectar of the Blackthorn: 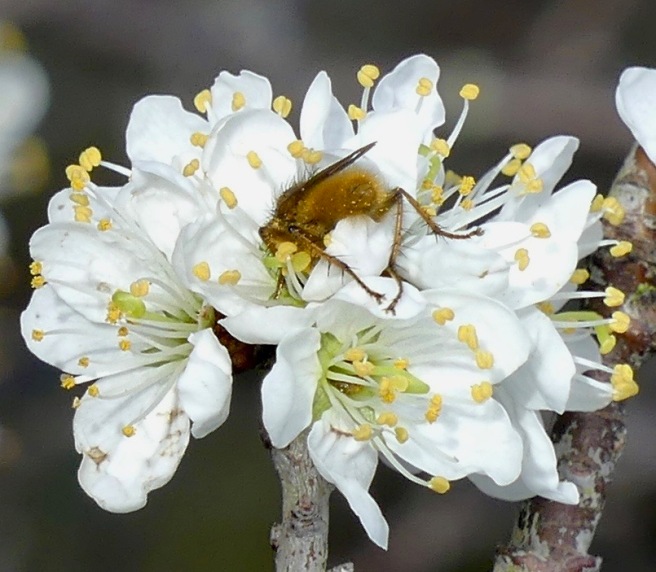 This is a male Yellow Dung Fly, Scathophaga stercoraria. These common flies are mainly carnivorous, usually feeding on smaller flies and insects in the vicinity of cow pats, although they do take nectar as well. The nearest cows are a long way from here although we do have horses a couple of fields away. Yellow Dung Flies may be common but I have certainly never noticed a furry yellow fly like that before.

I have previously mentioned this cup fungus that is growing all over a heap of rotting hay, but they are so peculiar that thought they deserved a second airing: 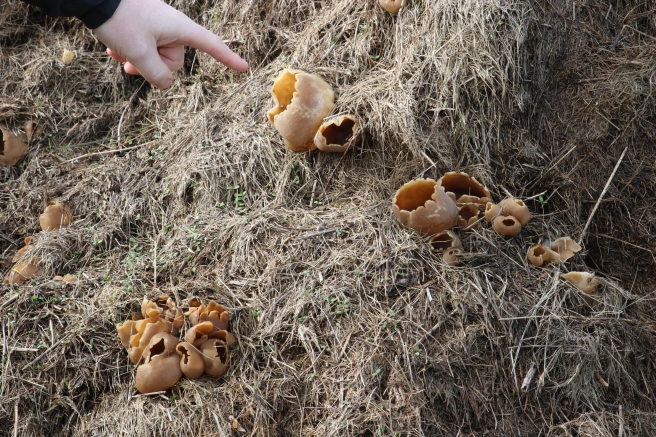 A beautiful Fox at 5pm, waiting for the peanuts – optimistically early

This Fox has found a fish: 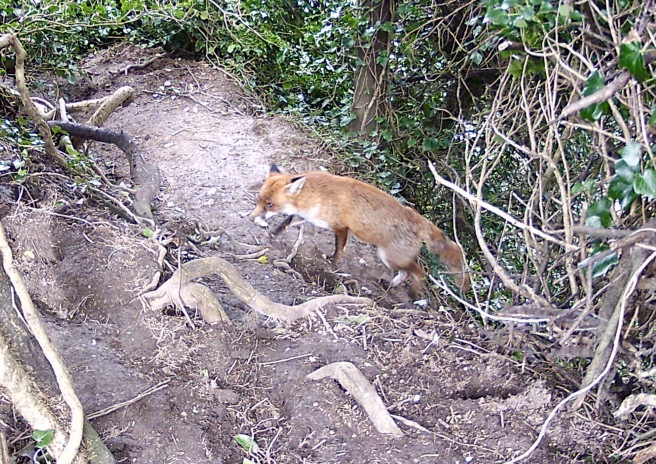 Yesterday the reptiles started to wake up and it is lovely to see them again. There was a Lizard and two Slow Worm warming up under the sampling squares: 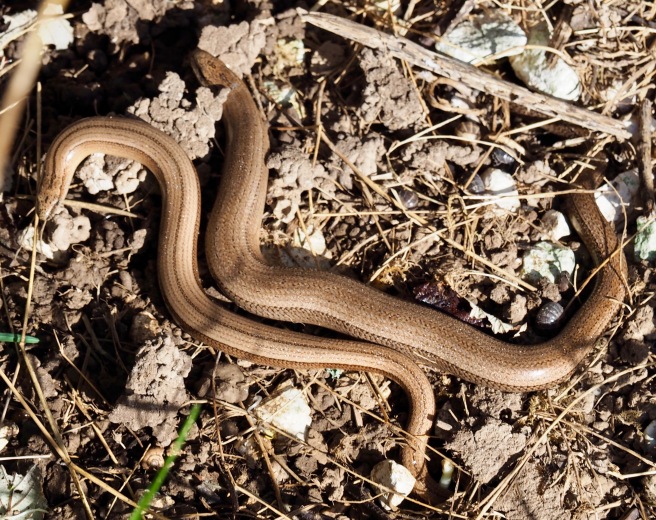 Moving to the wood, while we have been away the Tawny was worming more or less every night: 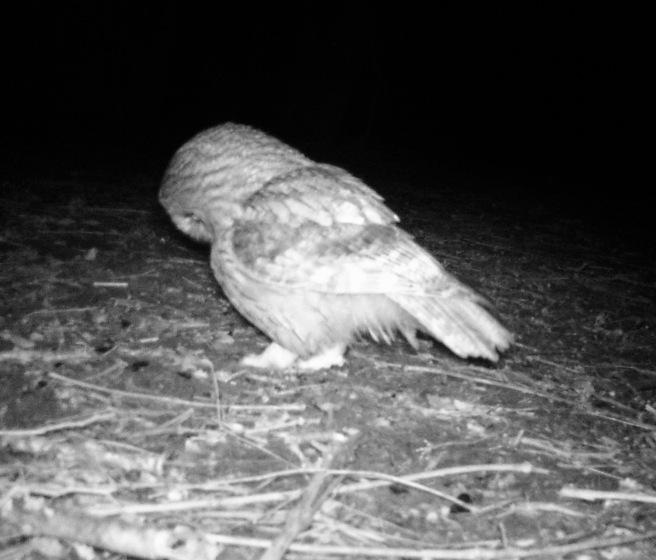 We have been working round the Owl boxes with a camera on a pole to see what has been building nests in them. The Tawny boxes all have Squirrels in them and now I can report that both Barn Owl boxes also do:

We plan to shoo the Squirrels away later in the summer once they have had a chance to raise their young.

Two Redwing have been regularly using this pond in the wood:

A female Bullfinch has also been seen: 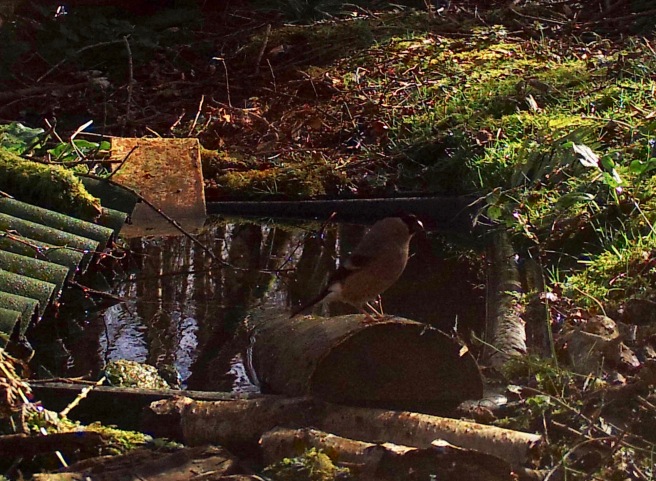 There are an awful lot of Pheasants still, loitering under the bird feeders in the wood, including this odd looking male with lots of blonde on his wing:

This Pheasant below is also still around for which I currently don’t have an explanation. Much darker than a female and so my best guess is an immature male but I need to ask the bird ringer when I next see him:

Although fellow wood owners have reported seeing Deer in their woods, this is the first time we have seen one in ours: 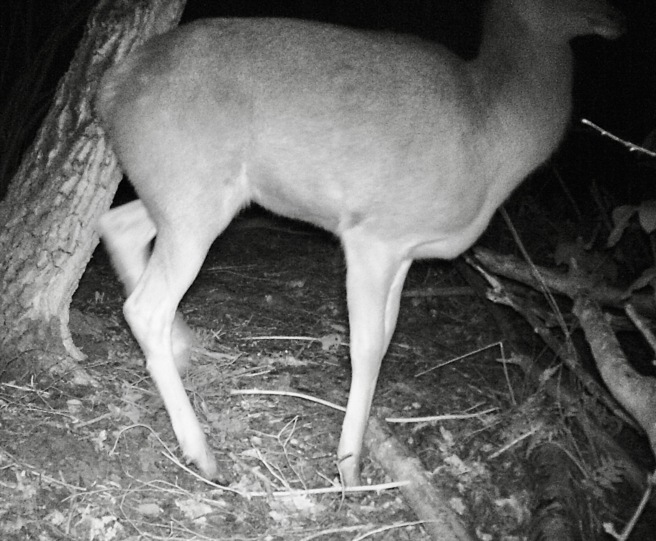 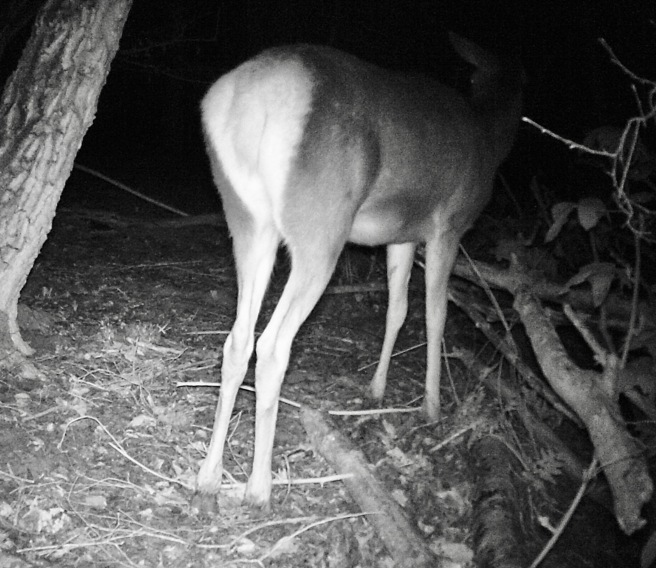 I am not terribly familiar with Deer and so I had a look in our book on Mammals to find out what Deer this is and I discovered that it is a Roe Deer. If it was a view of a Fallow Deer from the same angle, we would see black markings around the tail area as in this internet photo below: 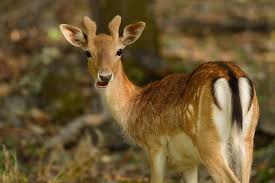 I finish today with an exciting new book that has just been published and I have bought to fill a gap in our natural history library:

We often find Caterpillars that, frustratingly, we are unable to identify and this new book should really help with that. Roll on the spring!