This is the latest weapon in our arsenal.

A quick summary to set the scene: when we took over the meadows, one of our first jobs was to erect a completely new fence along the boundary with the cliff in an attempt to keep the dog in.The fence was trenched down to discourage burrowing cliff-dwelling animals from creating holes which would then leak the dog. Practically overnight, a burrowing cliff-dwelling animal DID create a hole. In fact there are now three holes in the 300m or so of the boundary with the cliff: 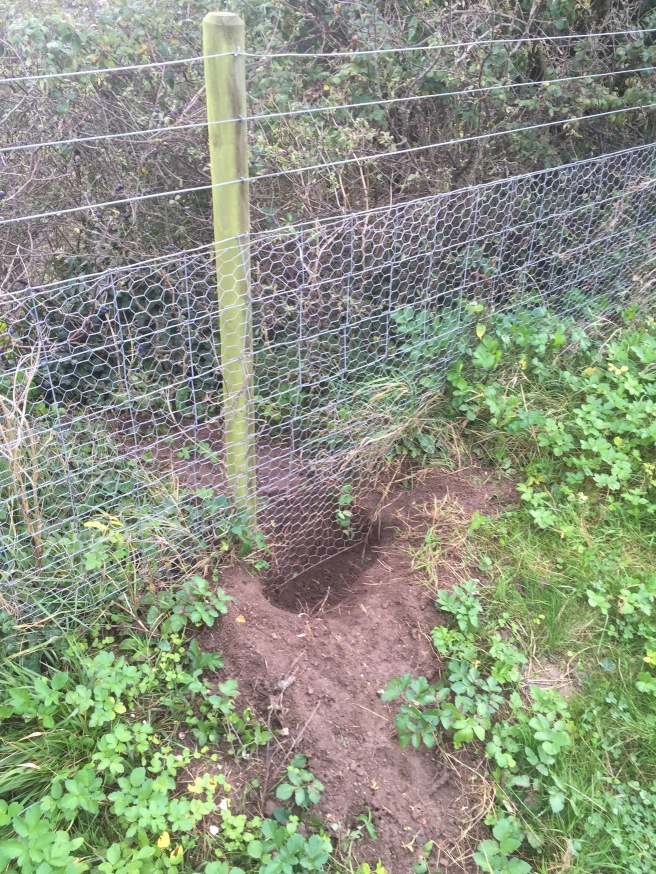 However, in the past year the dog has not shown any inclination to go through these holes and so we were happily going along with the naive hope that this meant she wouldn’t. However, sadly she did go through a couple of days ago and we can no longer feel relaxed that she is safely contained.

Therefore, we have bought this Badger Gate to go in the fence at the point where she went through. This gate is meant to be used to let badgers through rabbit proof fences. They can push through it like a cat flap but it is too heavy for a rabbit to do so. This stops the badger forcing its way through the fence, creating holes that the rabbits will then get through. Alternatively, by judicious use of a nail, it can be made into a one-way only gate which can be used to let badgers out of setts but not let them back in again, if you wanted to clear a sett. However, badgers are protected animals and you need a licence to do anything like that at or near to a sett – a fact that sits very uncomfortably with the Government ordered badger culling that is going on at the moment.

Anyway, we will shortly install this gate and cross our fingers that the dog will not just simply go through the gate like she used to go through the cat flap in our back door when she was a puppy.