It has been yet another weekend of gales here on the East Kent coastline. For the last few blustery days, Ferries have been sheltering alongside the meadows, a sure sign that there is disruption and passenger misery going on at nearby Dover port.

But the high drama of dark sky with lighter sea is very atmospheric:

We went along the coast up to Sandwich Bay to visit the Bird Observatory. They have just put some Motus aerials up:

The Motus Wildlife Tracking System is a landscape-scale research network studying the movements of migratory small animals that are fitted with antennae.  Not just birds – bats and large insects as well.

Below is a screenshot from the Motus website showing where they currently have aerials in our area:

We have been tentatively approached by Sandwich Bay Observatory to see if we would consider putting a Motus aerial up in the meadows, a few miles down the coast from them. We know so little about the whole thing at the moment but thought we would go to see these new aerials as a starting point.

While we were there, we went down onto Sandwich Bay beach, a lovely wild feeling place even though the land behind is covered by upmarket golf courses. 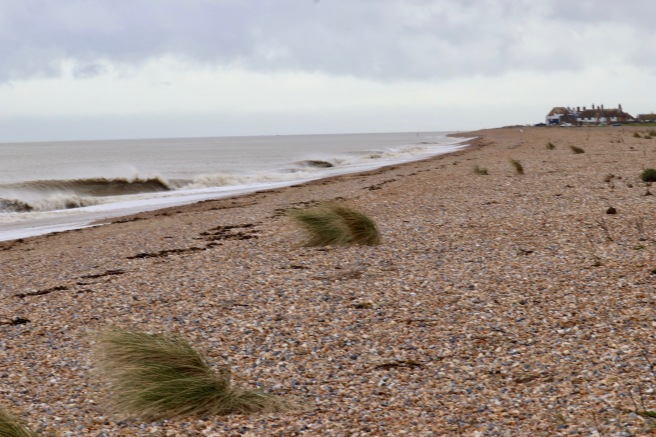 We saw a pair of Turnstones and turning stones were exactly what they were doing.

We also saw lots of Meadow Pipits. Note the super long claws on this bird:

Last February, a Meadow Pipit was ringed in the meadows, allowing us a close-up look at these claws, thought to be used as springs to catapult the bird quickly off the ground away from danger.

Now returning to the meadows, the Frog mating season continues in full flow and new spawn is still being laid:

Our scarecrow is still keeping the Heron well away from these activities, but there are other animals hoping to cash in on the bonanza of distracted Frog meat that is currently concentrated in the ponds.

One o’clock in the morning and we got our first photo of a Tawny Owl in the meadows for a year, although they are frequently heard calling. Frogs are a well known constituent of a Tawny’s diet: 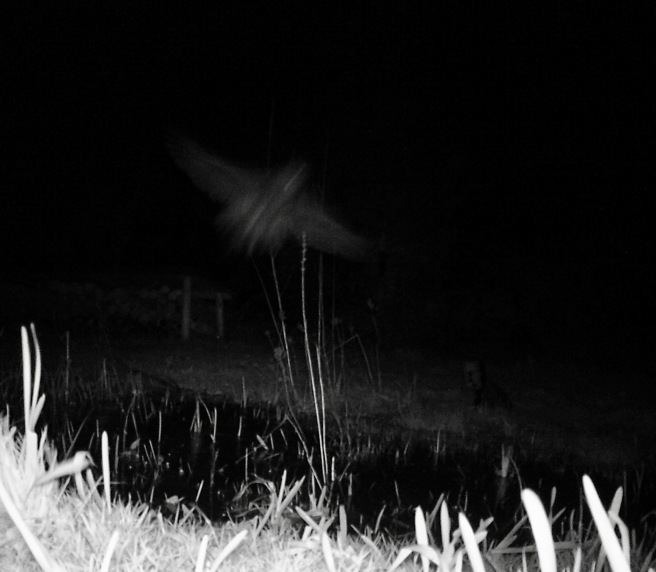 We got a better photo of a Tawny presumed catching Frogs back in 2018:

Foxes are also partial to the odd Frog:

Yes, we are watching you, so behave: 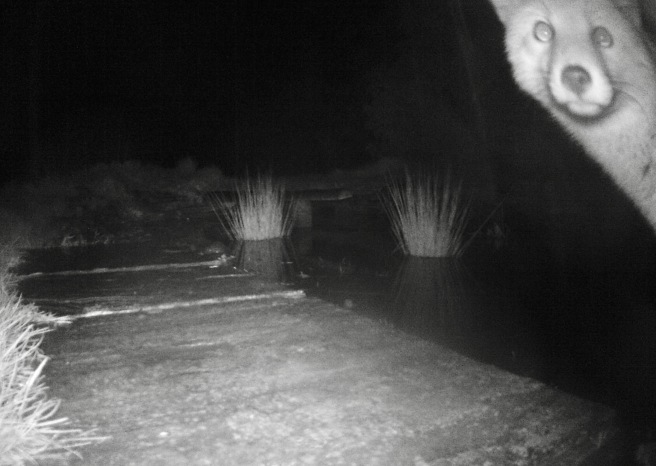 This stout Fox is surely full of cubs:

Although the weather continues foul, birds are pairing up everywhere. House Sparrows successfully raised three broods in this House Martin box last year. For at least a week now, a male Sparrow has been standing above the box and chirping really, really loudly and persistently. Maybe he has lost his mate and is trying to bring in a new lady?

A pair of Magpies are extremely busy constructing a nest at the top of a Pine tree:

The Yellowhammers are seen everyday on the strip now and we hope and presume that these have returned to breed:

Also, newly returned to the strip this week, after a winter spent elsewhere, are the Linnets. How lovely to see them back:

Skylarks are ascending and singing wondrously so high up in the sky:

Pairs of Larks are also cavorting together around the second meadow. Its a lovely sight to watch, although I am yet to get a photo of them. I will see what I can do for next time – some sunshine would help greatly.

House Sparrows have been on the strip all winter and they are still here in some noisy number: 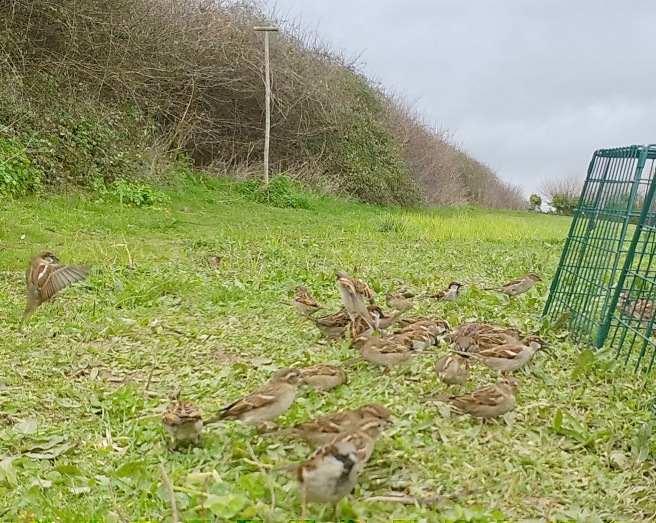 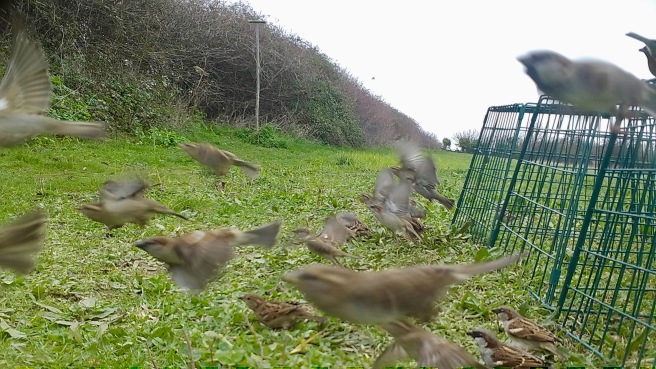 Crows are also resident throughout the year, although often up to no good: 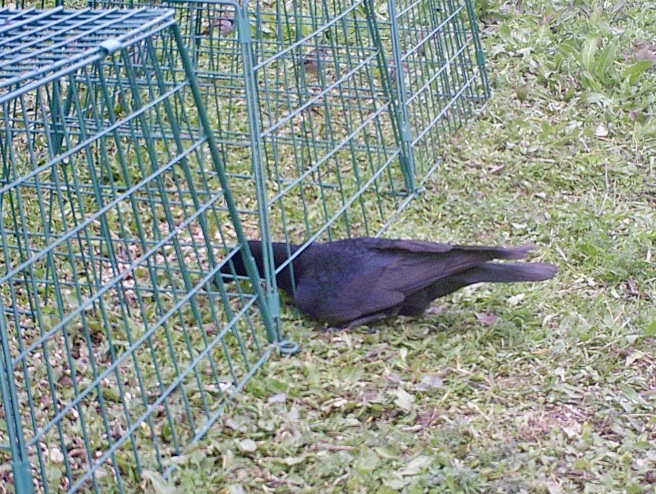 I forgot to take my camera with me when we visited the wood yesterday. However, what this poor photo below taken on my phone is showing is that thousands of trees are in the process of being planted in the field alongside the wood. The farm changed hands last year and the new owner has taken it out of agriculture to manage it for wildlife. This is an awful lot of trees to keep watered though – I wonder if they are going to try.

We saw a well-used animal track coming from this field into the new piece of wood that we have recently bought. A trail camera was put by the track to see what was using it:

It seems that the farmer is not the only one who has been out digging in the field.

The final photo today is of Primroses that are starting to come into flower in the wood, a tantalising taste of things to come: