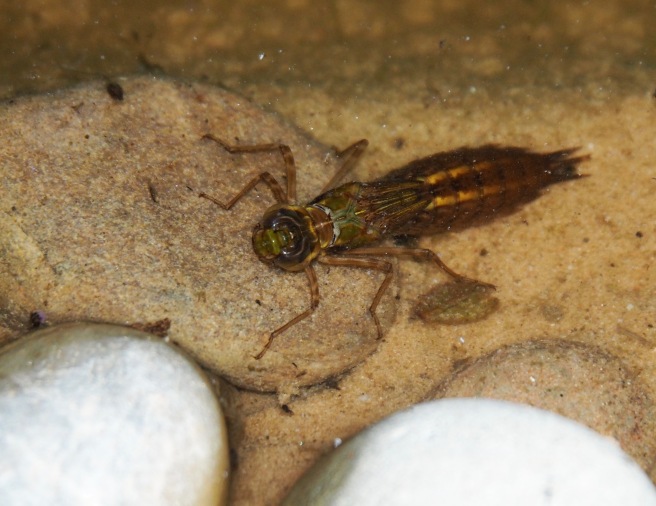 These monsters, Emperor Dragonfly larvae, around 5cm long and voracious predators, are very active in the ponds at night. They live as larvae for one or, more usually, two years in the pond and then, towards the end of May, they emerge from the water and burst out into their adult form: 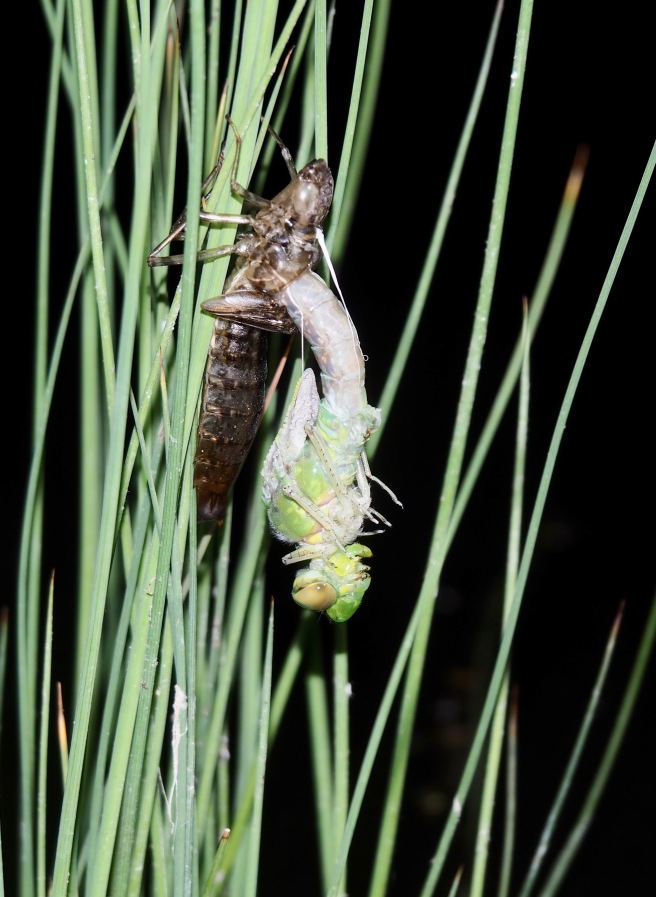 It doesn’t always go completely to plan. Last night one of the dragonflies was all crooked as it attempted to emerge: 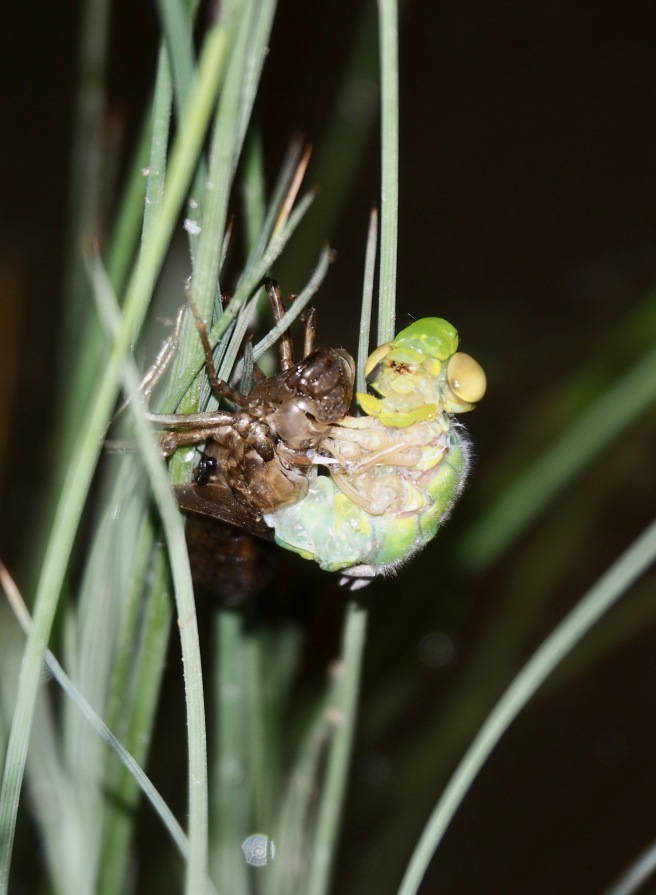 We left it alone and hoped for the best, but in the morning it was apparent that it had never managed to disentangle itself: 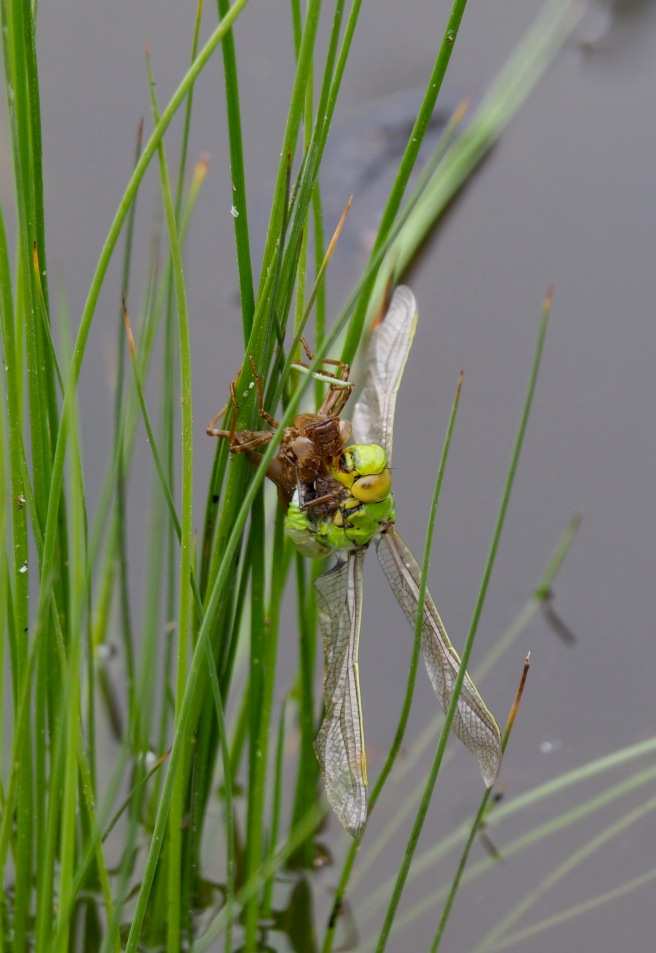 By midday it had disappeared, presumably eaten by a bird.

This was all happening in the hide pond. When emergences start in the wild pond we will stay up into the night, put some waders on, and try to photograph the entire sequence, but this is what we have got for now.

There have been about fifteen Emperor emergences from this pond so far. There were also Azure Damselflies emerging: 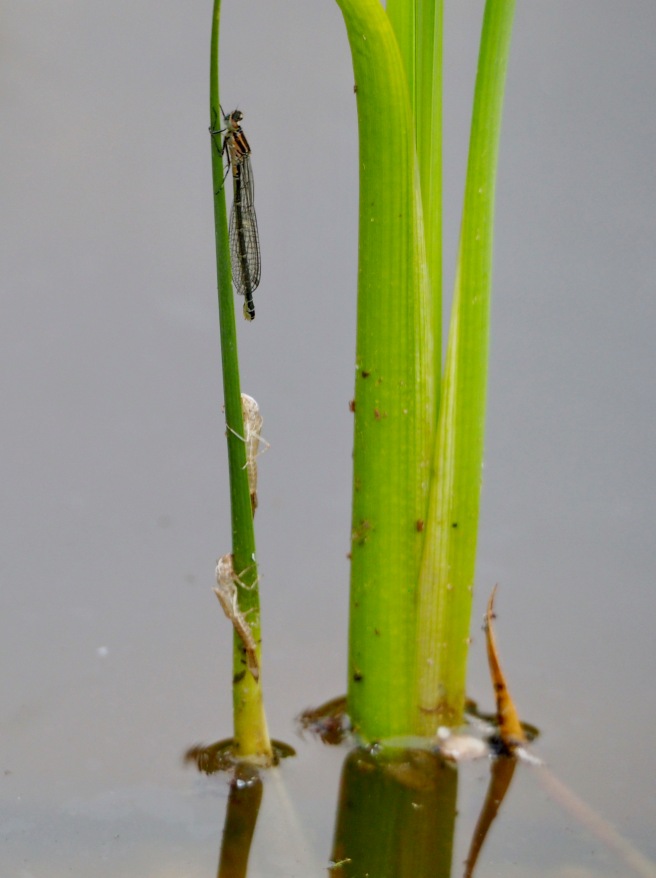 Below is another species of Dragonfly larvae in the pond. My guess is that they are Broad Bodied Chasers but, since they always seem to have algae growing on their backs, they are difficult things to get a good look at. 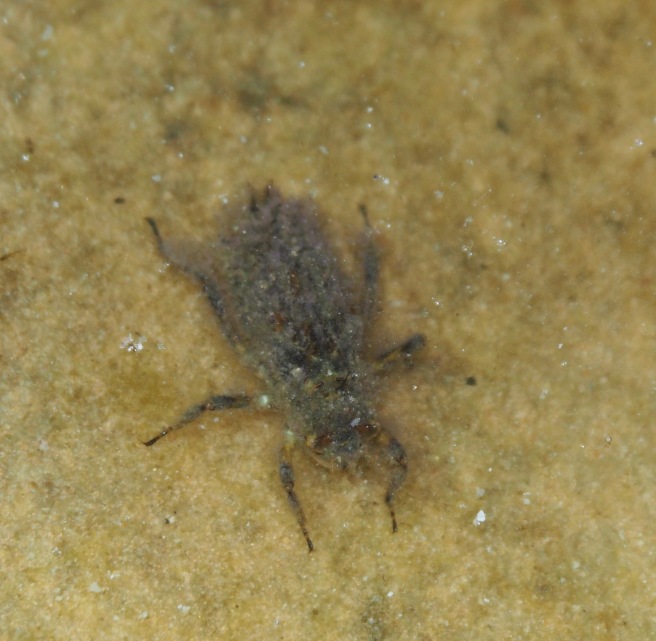 We also saw plenty of newts swimming around last night. They are green in this pond – probably to blend in against all that blanket weed – and black in the wild pond with the much darker substratum. 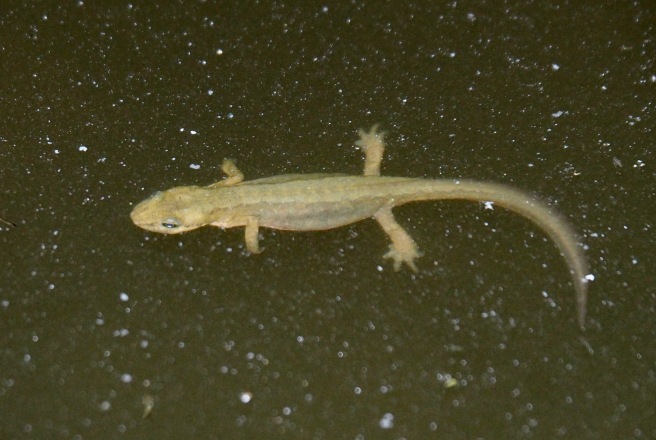 The number of new Slow Worms that have arrived in the meadows has now reached about sixty:

This is an adult male who will be about twelve years old: 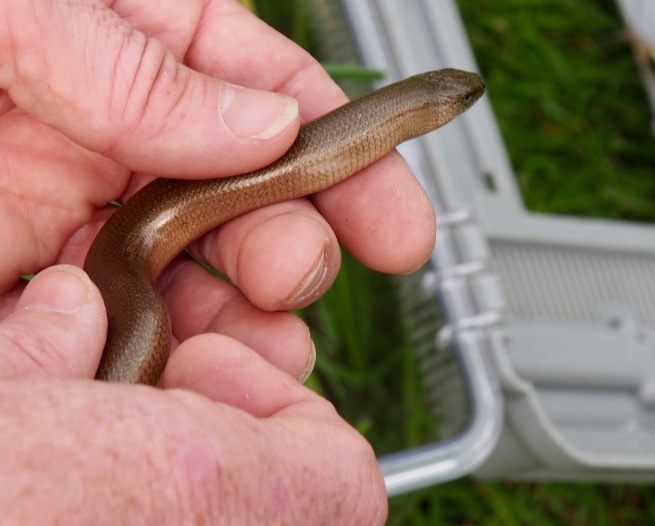 This is an adult female with the dark flanks. However, to be an archetypal female, she should have a stripe down the middle of her back as well: 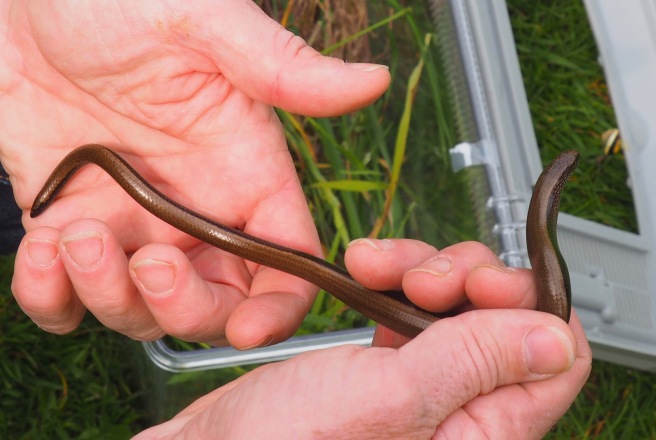 The Red Mason Bees are going about their lives with gusto. Here is the much smaller, white moustachioed male mating with the larger female: 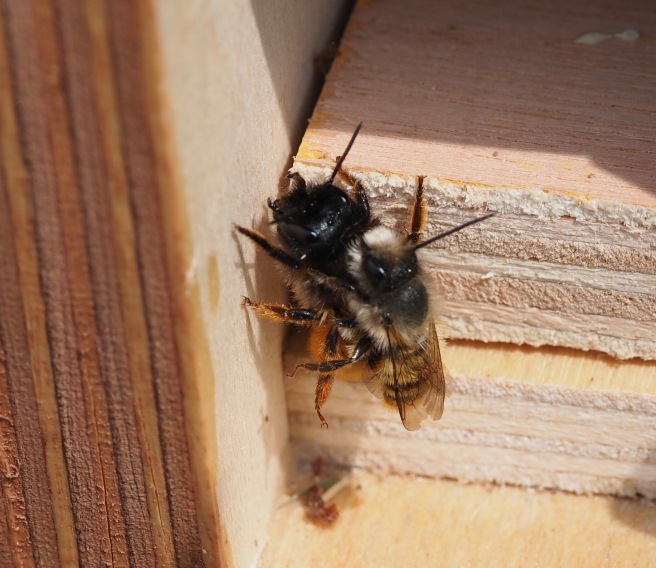 However, it was all a bit of a bundle because other males kept on trying to displace him and take over: 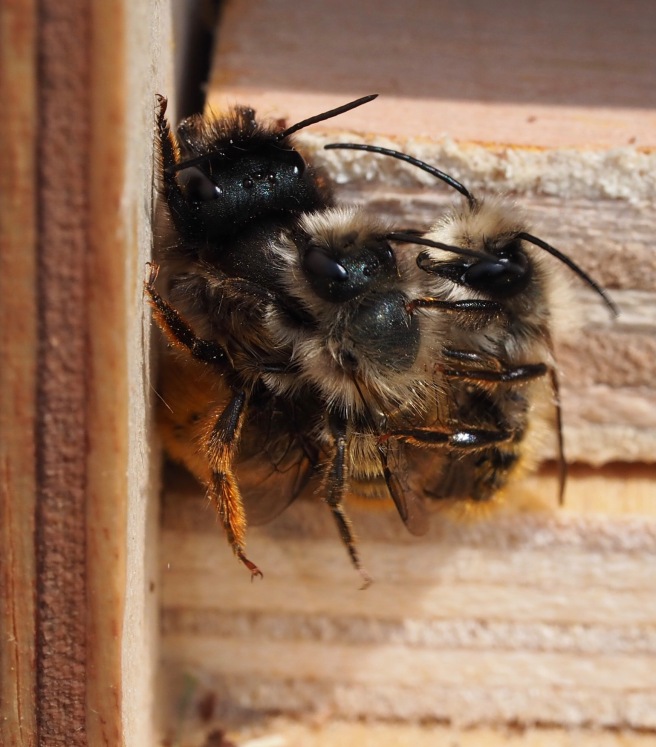 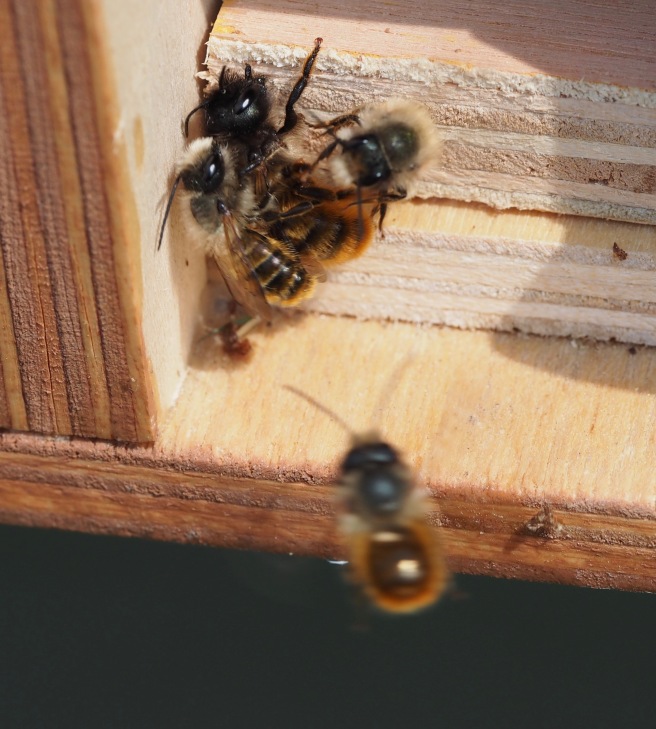 Once that is all successfully negotiated, the female goes on the build a nest: 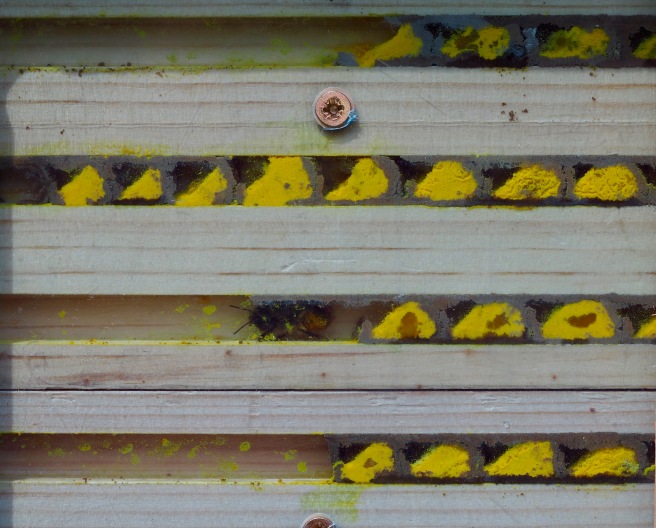 This is a bee observation box with the wooden side temporarily removed for the purpose of taking photographs. She feeds her young on pollen rather than nectar. A pile of pollen is built,  an egg laid on it and then a mud wall built to contain it into its own compartment. The eggs will hatch in their individual cells and the bee larva lives off the pollen store during the summer until it pupates in the autumn.

It is always funny to see how much of the fluff from the dog’s ball is incorporated into the nests in the meadows: 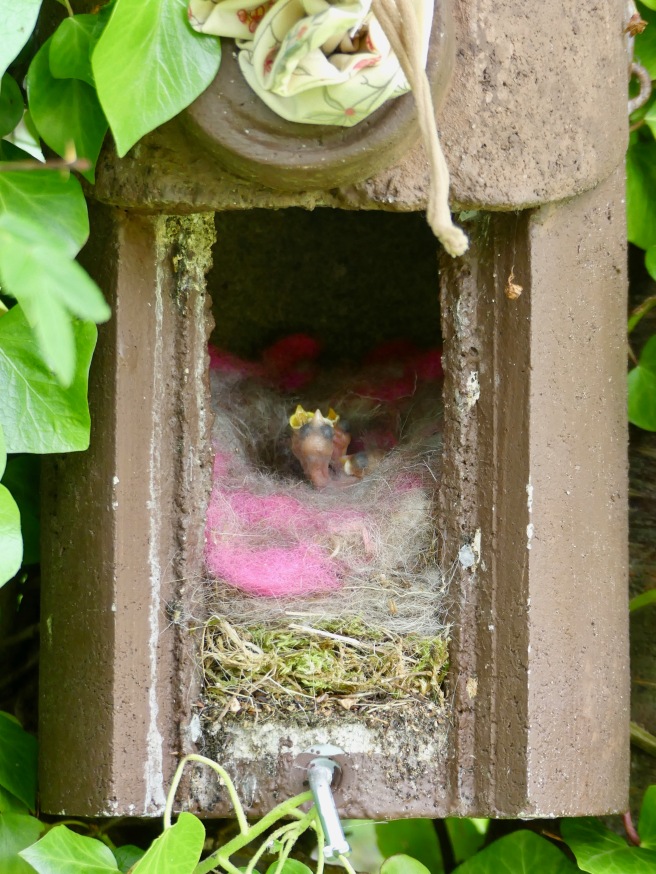 Here is the White Helleborine (a type of Orchid) coming out into flower in the meadows. This is its third year. 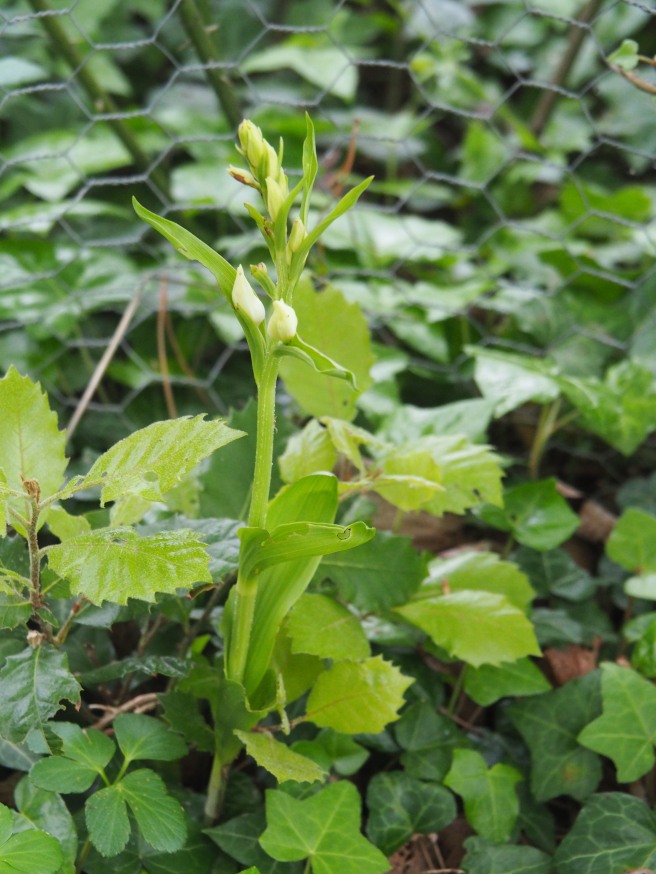 The Broom Rape, interesting because it is parasitic on Clover, is starting to come up: 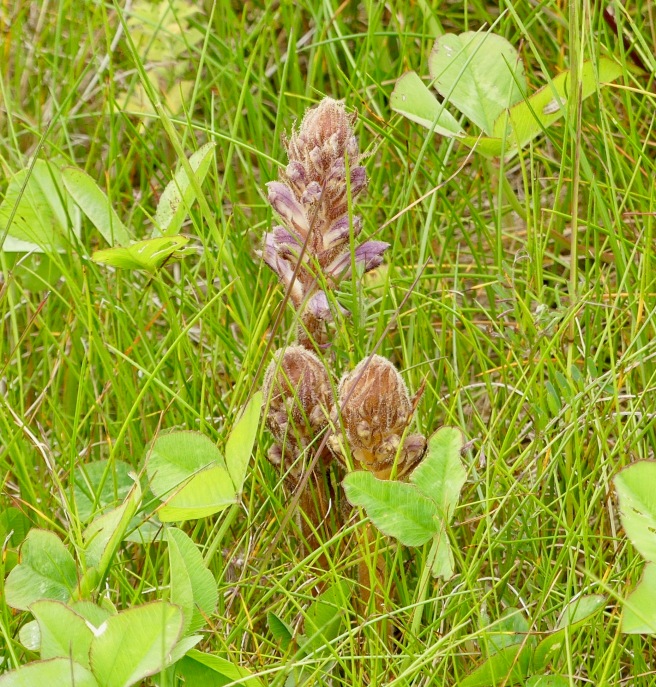 I never get tired of trying to successfully photograph these Green Long Horn Moths: 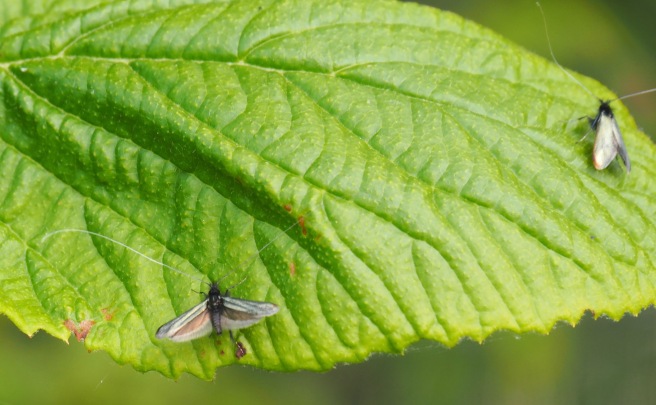 The water level has dropped in the wild pond but these baby Badgers are making it seem worse than it is: 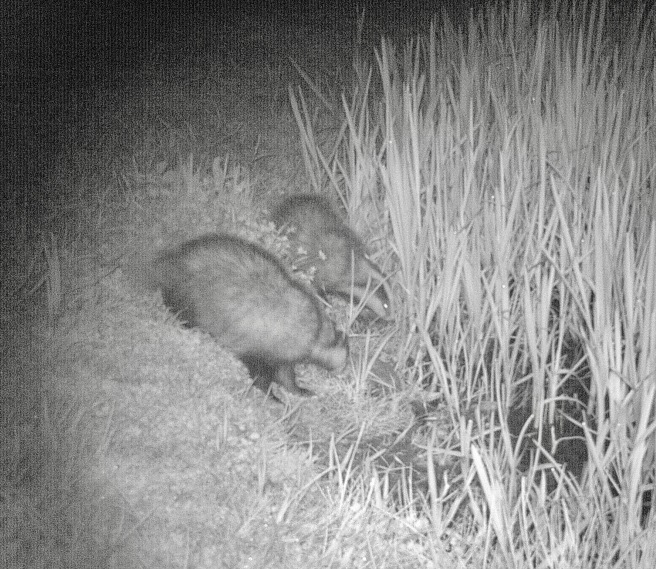 I was still a bit uncertain as to whether it is a male or a female Yellowhammer that has been visiting and so have asked the bird ringer. It turns out that apparently they are surprisingly difficult to sex from first appearances. This is either a female or a young male, it seems. He is going to try to catch and ring it to find out for sure: 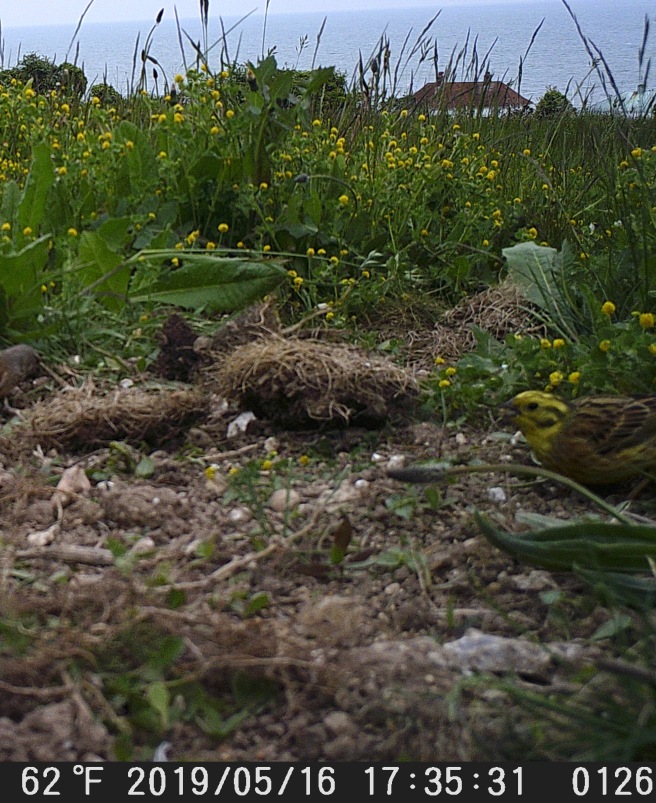 In the wood, the Woodpecker nest camera has shown that the babies are being fed by both parents. Here is the female with no red on her head: 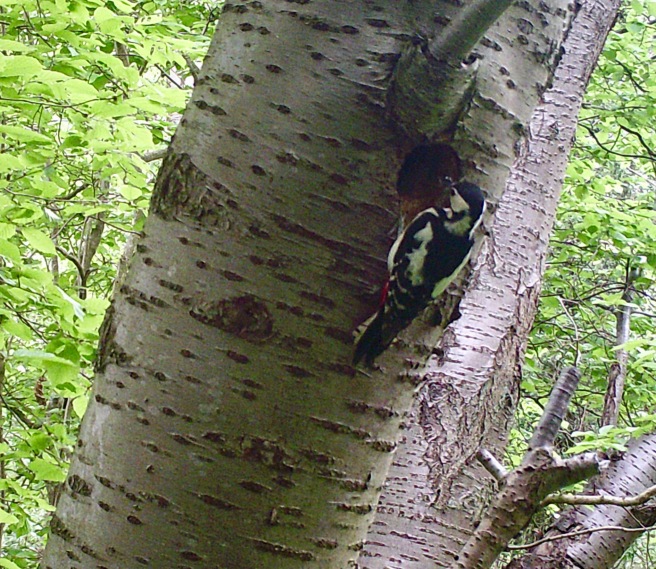 And here is the male with a red nape:

One final thing for today is a most wonderful beetle that was flying around the regeneration area of the wood yesterday. It was quite large, although not by Stag Beetle standards:

It is the Red-Headed Cardinal Beetle. Quite widespread and its larvae feed on other insects beneath the bark of freshly dead broadleaved trees. It’s a very lovely thing.