The work on building refuges for the relocated Slow Worms is now complete. One and a half tons of untreated timber sourced from a tree surgeon was delivered: 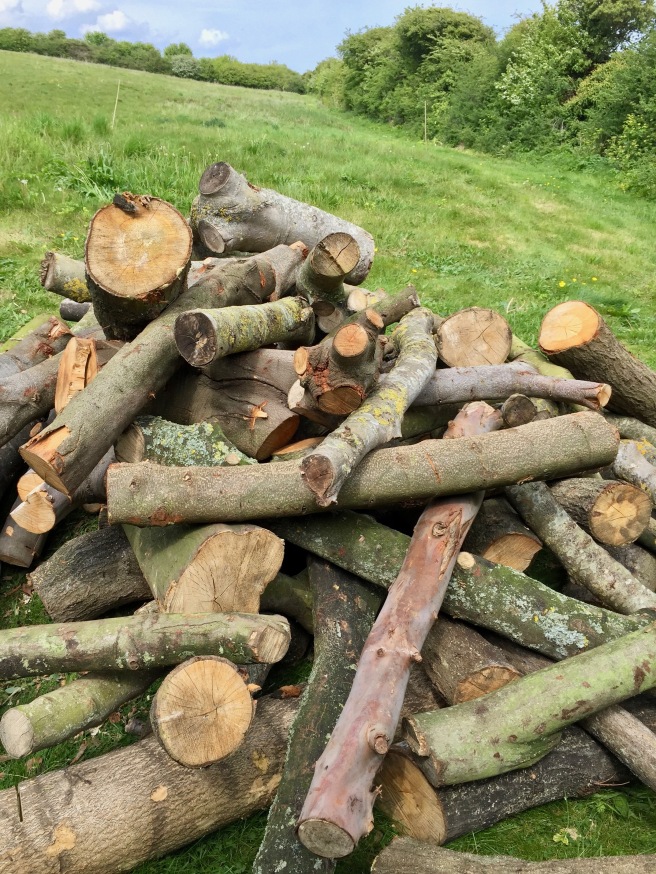 Today, in the pouring rain, the refuges were constructed by digging the bottom layer into the turf and then laying the turf on top of the completed pile: 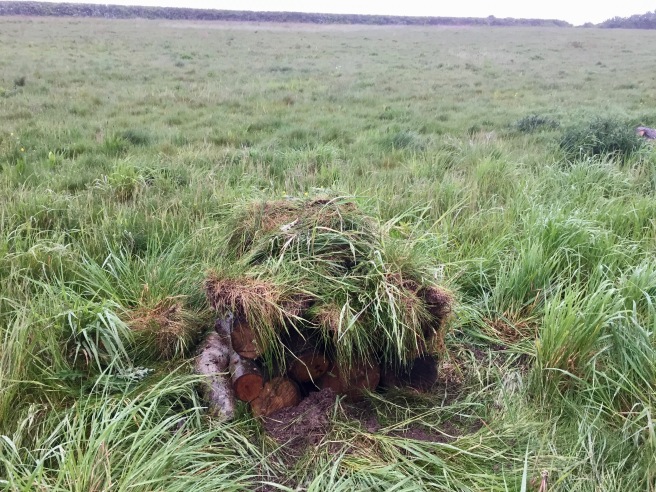 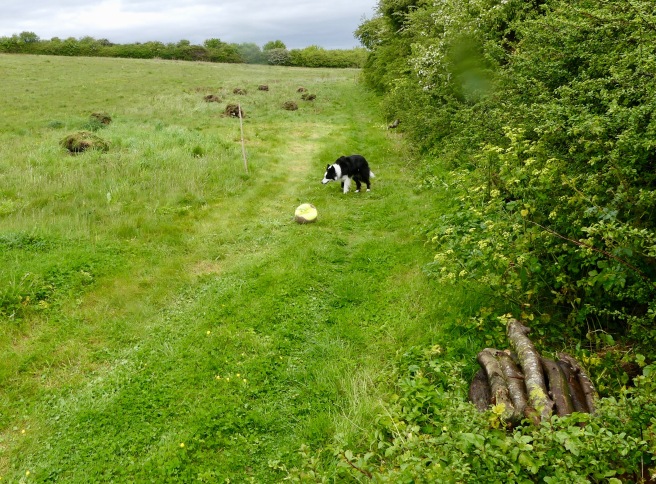 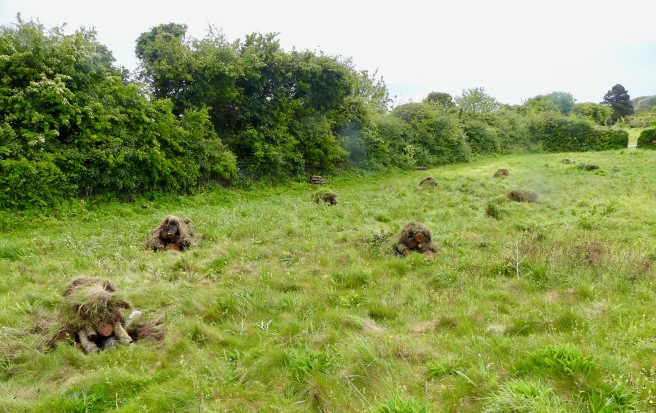 It all looks a bit like a prehistoric landscape to me. The Slow Worms will start arriving in a couple of days and will be released into these structures to protect them while they get their bearings.

I have talked before about the St Mark’s Flies that are billowing out above the hedgerows at the moment. They hatch out on or around St Mark’s Day on 25th April and live for about a week:

They are here every year but do seem particularly abundant this year. In their short lives above ground, they are important pollinators, flying from flower to flower with their legs distinctively dangling down: 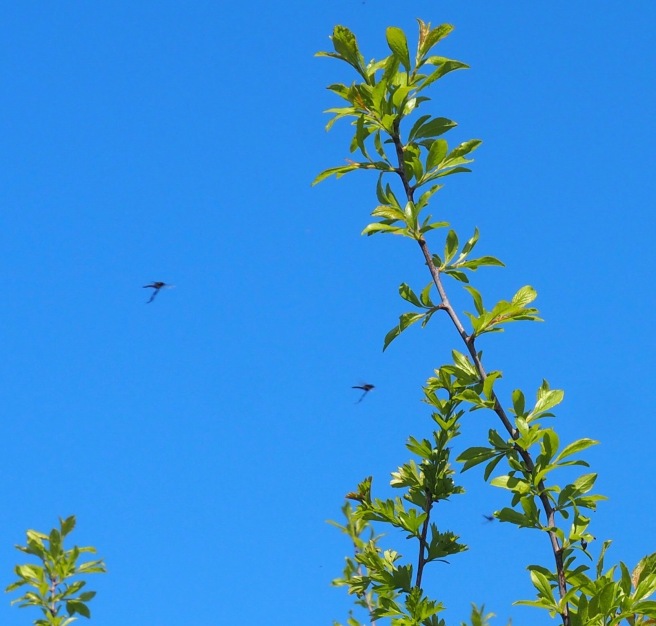 And afterwards the females lay their eggs into the soil and die. The eggs hatch and the larvae live in the soil through the summer, pupate over winter and then, on 25th April next year, off it all goes again.

What is really fascinating is noticing the other species that are cashing in on this bonanza, the boom in the St Marks Flies being woven into their own lifecycles.

As the swells of St Mark’s Flies gather above the hedgerows, these Dance Flies are catching and killing them. Then, carrying the cadavers of the flies across their bodies, they await a female.

When a female arrives, the male offers her the dead fly as a gift and then mates with her as she eats it:

A female will not mate with a male who does not present a gift to her. All very interesting and wonderful to stand at the hedgerows watching this all going on.

While we were loitering along the hedgerows, we also spotted another iconic spring species, the Green Longhorn Moth (Adela reaumurella):

Many Green Hairstreaks were feeding and battling with each other amongst the Hawthorn. A small but beautifully iridescent butterfly:

About six months ago, there was a little spate of Foxes turning up on the cameras carrying large fish. We think that there must have been a new and naive night fisherman down on the shingle below who took his time to cotton on to why his fish catch kept disappearing. But cotton on he eventually must have, because there have been no Fox-with-Fish sightings for quite a while. However, the Fox got lucky again a couple of nights ago and here one is with a large Dog Fish, which may well be going back to the den to feed cubs: 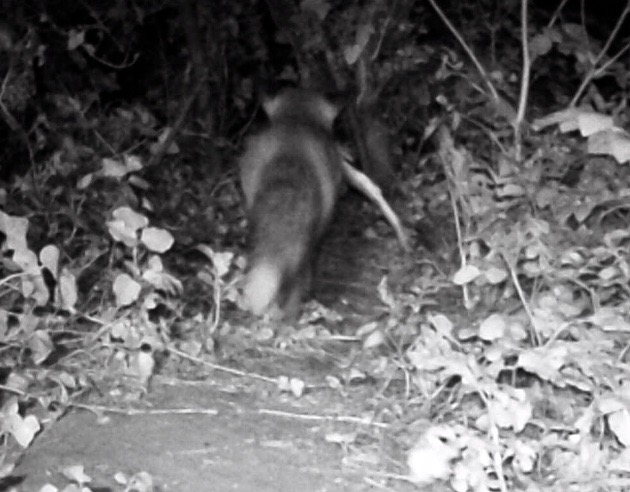 Yesterday I picked up a carrier bag of electronics from one of our sons:

Loving this sort of thing, he has cobbled together a system to play loud Swift calls out of a couple of repurposed car speakers. It was all working well yesterday at his home and now all I need to do is to remember how to reassemble it once I am back at the meadows. Over the winter we have built and erected a pair of semi-detached Swift dwellings and playing these calls in the vicinity will greatly improve the chances of the box being noticed now that the Swifts are arriving back in the country.

Over at Gate cam, a pair of Blackbirds are building a nest. When I say ‘a pair’, it actually only one of them, a ringed female, who is doing all the work and I have a large number of photos of her with her beak full of nest material. The male is around too, although he isn’t assisting with the building work, which, I read, is completely normal:

I suppose the male is providing some protection while all this work goes on, although he is also doing a fair amount of posing as well:

There was also this lugubrious Green Woodpecker:

We have been hearing the melodious warbling of newly arrived Whitethroats along the hedgerows for the last week and now here is one on the gate: 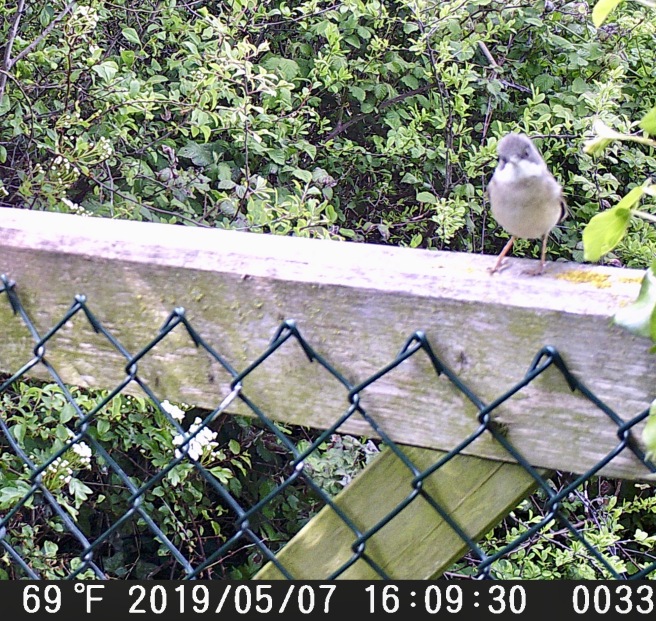 It has been several months since we last had a Tawny on the perch in the meadows and we are completely delighted to see it again. 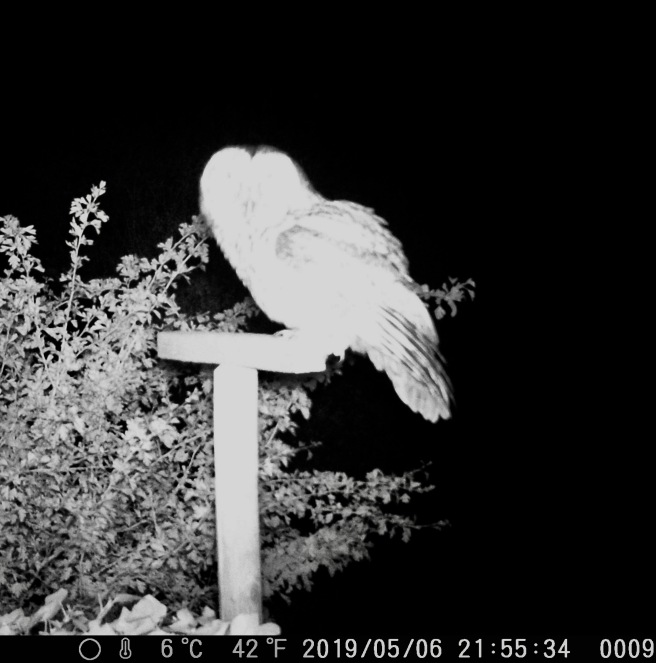 Also on the perch was this starling that is carrying something. I presume that they are nesting nearby but we don’t think either of our Starling boxes are being used by Starling this year (one has Great Tits in).

Having become traumatised over the last two summers with the struggle to keep the pond levels up without resorting to adding tap water (which would introduce unwanted nutrients), we vowed this year to take action whenever there was any rain being forecast. Rain was due today and so we have spread out a tarpaulin to increase the catchment area of the pond. Every little helps at this time of year:

The tarpaulin didn’t seem to faze the animals:

and in the end we had about 16mm of rain which is most welcome. 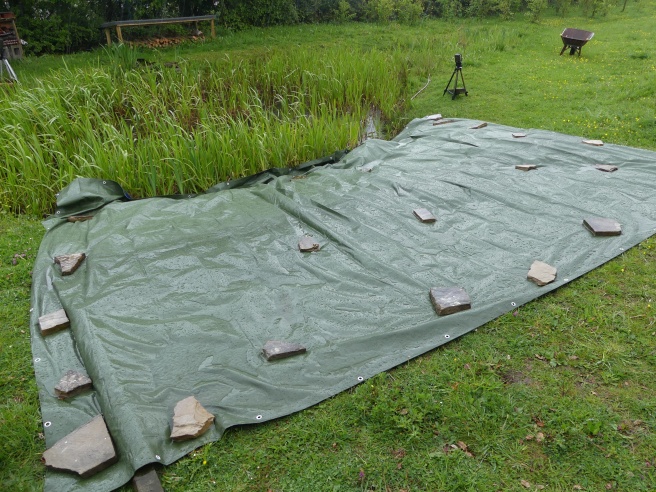 I end today with some gratuitous photos of baby Badgers:

And a lovely one of a Fox: 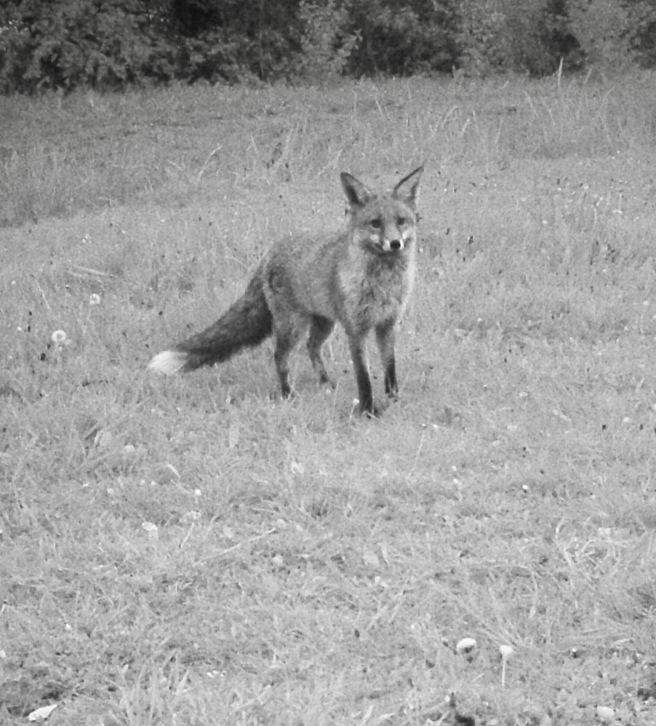