A Fox with mange has come to eat some peanuts for three nights on the trot:

This is not one of our resident foxes but, if it continues to regularly come here, then perhaps we can help it. There is a homeopathic liquid called Arsen Sulphur that I bought three years ago from Helios Homeopathy when the resident foxes here got mange, having been recommended to do so by the National Fox Welfare Society. Each night for six weeks we made three rounds of jam sandwiches, put a few drops of this liquid on each one and then cut them up into little squares. I phoned Helios again now who confirmed that my left-over liquid would still be alright.

As it got to dusk last night, I made the sandwiches up (using honey instead of jam – maybe it does have some in-built antiseptic properties as is often claimed? It feels more natural, anyway) and put them out with the peanuts.

This morning, I see that the Fox did visit again last night, but only after the other Foxes had got there first and eaten all the sandwiches. It won’t do these healthy Foxes harm but I do need to change my tactics in order to reach my intended target. Since this Fox is not part of the normal group here, maybe it will only visit once they have been and gone and so perhaps the sandwiches should go out an hour or two after the peanuts.

This is what I will try tonight, then.

Going through the videos yesterday, I have the following two screenshots: 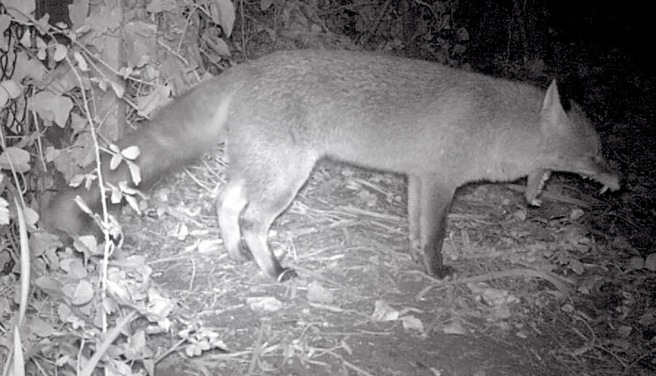 The Fox was yawning but the Badger was just exercising his jaws – I have never seen a Badger yawn and presume that they don’t do so. They do love to have a jolly good scratch though:

As the winter progresses and the hedgerows are increasingly getting stripped of berries, it is interesting to see what the birds are finding to eat. This Blackbird has an Ivy berry here. These berries don’t ripen until mid to late winter and so form a vital food source to bridge the hunger gap in late winter when everything else has gone.

We don’t have a Walnut tree here but there are some in the vicinity. I just don’t know how this Magpie is going to open this nut though – walnuts are so tough and surely its beak is not that powerful? 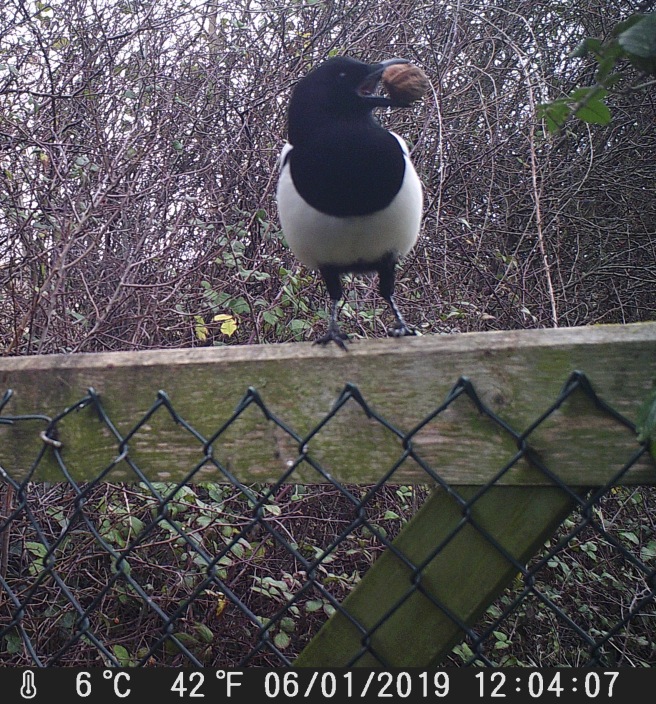 When we bought these meadows, we had a long and steep learning curve to climb. Now, four years on, we feel that we are ready for a new challenge. To this end, on 3rd January, we completed on the purchase of a six acre wood near Canterbury. It is quite a diverse wood with about two acres of it having been cut and replanted with native trees within the last ten years. The more mature four acre section has a central heart of Silver Birch and other areas of Hazel and Willow coppice along with sporadic mature Beech, Oak, Sycamore and Sweet Chestnut trees. It’s a lovely wood.

We have got up and running straight away by ordering two Barn Owl boxes, a Tawny Owl box, a Kestrel box and six smaller bird boxes and we will be getting these up over the next week or so: 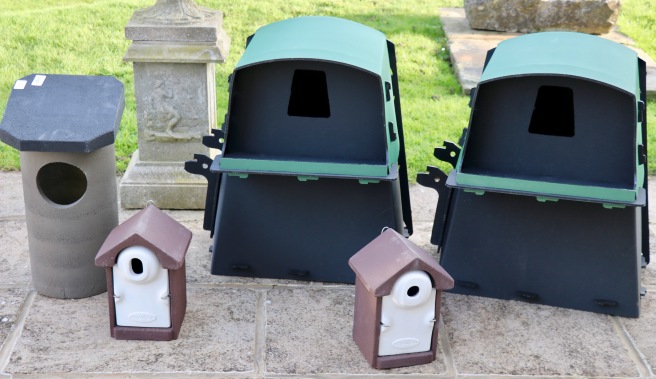 It is a really exciting to have a new and very different habitat to learn about and we will be working to try to encourage as much biodiversity here as we can. This blog will now cover the wildlife happenings of Walmer Meadows and Walmer Wood and I am really looking forward to seeing what 2019 is going to bring.