Another couple of glorious days and the meadows are alive with migrants gathering here before they set off across the channel – House Martins sweeping through the air and the Pine trees jumping with Chiffchaffs. There is a vague feeling of the days before Dunkirk.

Sandwich Bay Bird Observatory, just up the coast from here, ringed 746 birds yesterday – mainly House Martins, Chiffchaffs and Blackcaps. Most of those will already be in France by now.

The Tawny is visiting nightly – in fact last night it visited at least twice. We heard it’s loud calling close by in the early evening and here it is at 2.40am. The dew on the lens almost increases the drama: 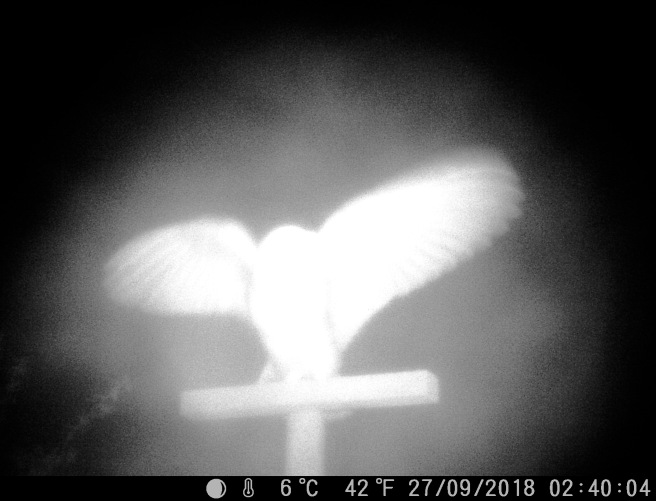 Other action on the cameras from last night:

Some hierarchical positioning from the foxes is mainly a showing of teeth:

And talking of showing teeth:

I am not sure what this badger was doing but it was on it’s own and it is not aggression however it might appear. Certainly, though, their jaws can open an awfully long way.

Here is a bedding-dragging shot that I was hoping for:

And a rare shot of a badger in the light, wending its way to bed this morning:

Not quite in focus, but a Robin at the pond, showing that it has recently spent some time in the bird ringer’s net 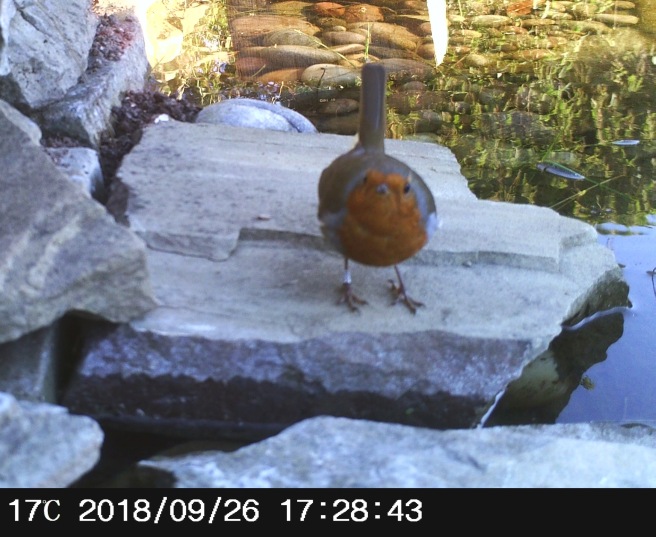 The Green Woodpecker is a daily visitor to the ponds: 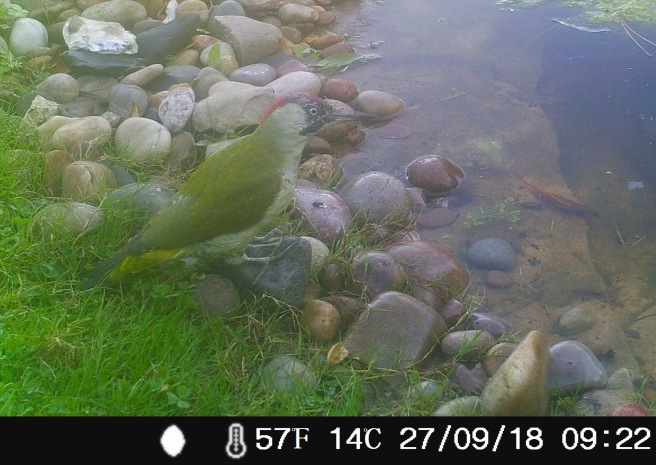 As is the homing pigeon, who is still here and is yet to find its way home:

In fact, I was working in the allotment this afternoon and I saw this bird as it came in for a drink. I thought that it might be accustomed to humans and so approached with a friendly attitude, but it wasn’t having any of it and scarpered.

We have five Gooseberry bushes on the allotment because we are a family who are very fond indeed of Gooseberries. However, they have been attacked by Gooseberry Sawflies this year and have been stripped of all their leaves:

As I was weeding around the bushes, I found a Gooseberry Sawfly:

The allotment is within the meadows and is managed without chemicals and so, although I let this little thing go today, I am going to have to investigate the use of nematodes next year because this problem will not just go away on its own now.

However, this Cinnamon bug (Corizus hyoscyami) is a bit of a beauty and is welcome here:

Yellow Rattle is a trendy thing in flower-meadow growing circles. It is a British native plant and is parasitic on grass and so knocks back otherwise-bullying grasses, letting the flowers come through. We don’t have any Yellow Rattle here and so I have sown some seed in an area of the first meadow as a bit of an experiment. If some grows next year, we can shake the seed heads around in other areas and expand it’s area year-on-year.

When cutting the area to be sown, another wasp nest was discovered in a hole in the ground. It is tremendously active one with a steady stream of wasps in and out, so I steered well clear of this.

Lastly for today, there is this intriguing photo:

This checking out of the nest box by these three birds went on for at least half an hour. I asked the bird ringer what was going on here and it seems that male Blue Tits select boxes to roost in over the winter and they are then in pole position to claim the box for the breeding season the next spring. There is a movement of Blue Tits in the autumn and so these could be newly-arrived male birds competing for the box.

I hear that today was the last in this run of beautiful weather and so I hope that all those gathered birds get safely off across the channel tonight before everything changes.