Fifty-five House Martins were ringed here yesterday! Their contact call was played on a sound system nearby and, all of a sudden, the air was full of them. One or two will have got caught in the mist net and they will have called to the others for help and before we knew it, there were 54 in the net all at once leading to a frenzy of activity for the poor bird ringer who was on his own yesterday.

We have learned an awful lot about House Martins from this that we didn’t know before.

Firstly, the juveniles and the adults migrate back to Africa in separate groups. Of the 55 caught yesterday, only one was an adult and the rest were juveniles. The adults stay on to have a second brood and the juveniles go on ahead, usually with no bird that has been before to show them the way. Simply amazing.

Secondly, even though thousands of House Martins are ringed in the UK every year, we still don’t know where our UK birds go to spend the winter. Their exact wintering grounds are a mystery although thought to be somewhere in sub-Saharan Africa. Also not known are the migration routes taken. Currently there is not a satellite tag small enough to go on a bird of their size and so the hope is that there will be retraps of ringed birds to give a clue as to what’s going on.

However, it is known that they migrate at high altitudes over mountain ranges – probably the Pyrenees. This is why it it thought that the juveniles have feathery legs and feet, to keep them warmer:

Once this juvenile above was released after having been ringed, it will probably next touch ground in Africa which is a mind boggling thought.

I posted the photograph below onto a Hoverfly Facebook group to ask if it is known how they manage to fly unchallenged into otherwise extremely well-guarded wasps’ nests to lay their eggs. These eggs hatch to become larvae that are parasitic on the wasp larvae: 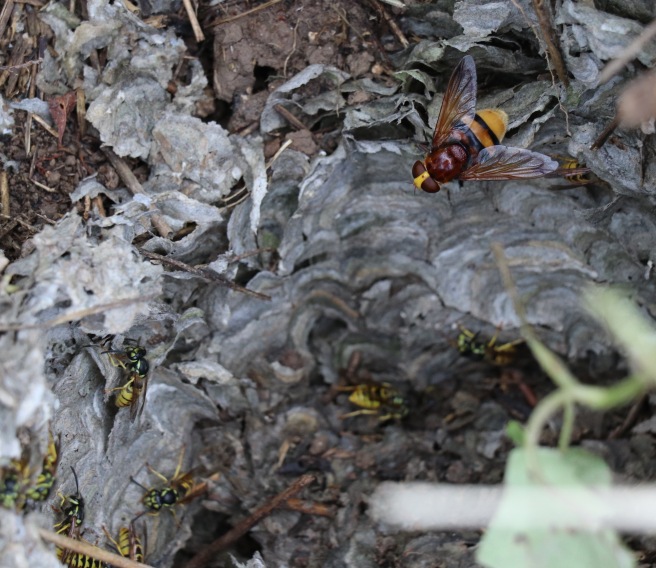 The first thing I discovered was that I had misidentified the Hoverfly and that this is Volucella zonaria (the Hornet Mimic Hoverfly) rather than Volucella inanis. The experts on the group tell me that one possibility is that the larvae eat sufficient detritus while in the nest so that they pick up wasp pheromones that then mask them from attack. However, this is simply a guess and the reason just isn’t known. They also mentioned that it is an interesting record because the first ever record of Volucella zonaria being a resident species came from Walmer, Kent which is where the meadows are.

The next photo is notable because we have never recorded badgers carrying food before.  They eat food where they find it and also don’t carry prey back to their young – the babies are suckled until they are old enough to go out on foraging trips with their parents.

I put some slightly out-of-date eggs out with the peanuts and here they are carrying them back onto the cliff path before eating them.

We have a lot of dragonflies here at the moment hawking along the hedgerows and buzzing over the ponds. Occasionally one will stop for long enough for us to get a bit of a look at it. This one is a Migrant Hawker – maybe they all are:

Lastly for today, once again the Sparrowhawk is back on the gate, this time having a bit of a scratch with those fearsome talons of hers.