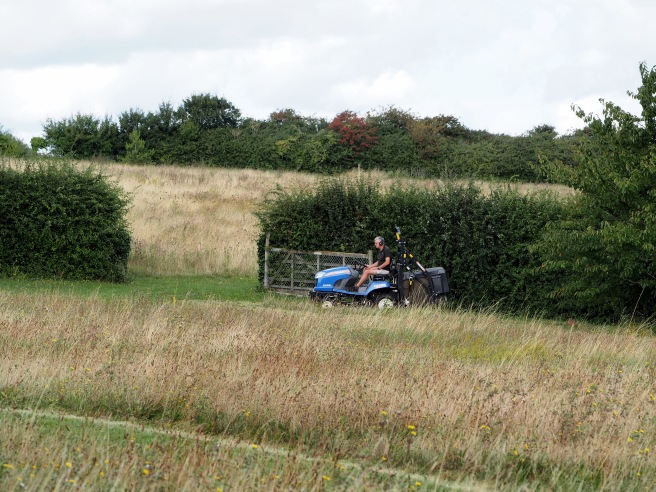 As the late August Bank Holiday weekend rolls into view, everything here has a late Summer feel. We have embarked on some more cutting of areas that were untouched last year. Doing little areas at a time like this gives us a chance to get rid of the hay before we move on to the next bit – otherwise we would be totally swamped by the volumes involved.

The bird ringer is coming back next week along with his retired vicar apprentice and this time they are putting out many more nets and hoping again for Linnets and also for other farmland birds such as Yellowhammer. I have put down some seed: 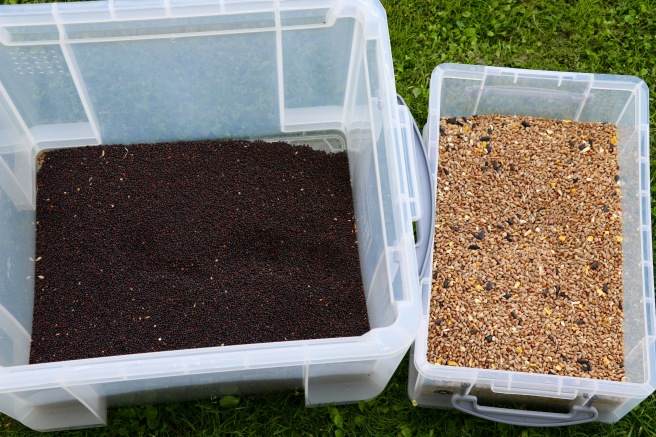 I have added some general bird seed to the oilseed rape and spread it thinly along the entire 60m of the weedy strip and so let us see what that attracts down. I hope they catch enough birds to justify their early start – they plan to be here at 6am. You have got to be a morning person to be a bird ringer.

There was a lot of dragonfly action at the ponds today. A rather tatty Emperor was laying her eggs: 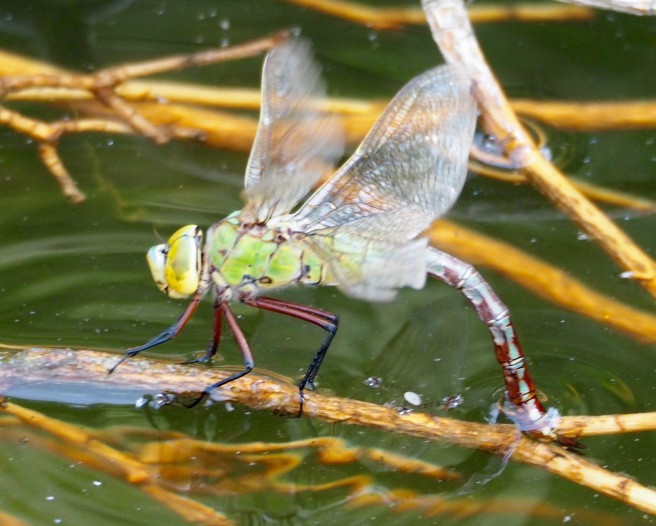 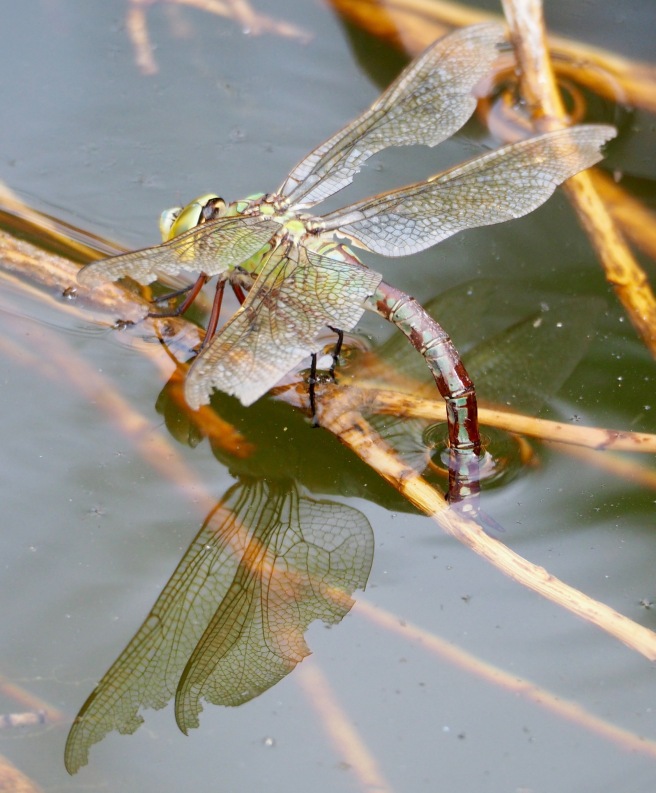 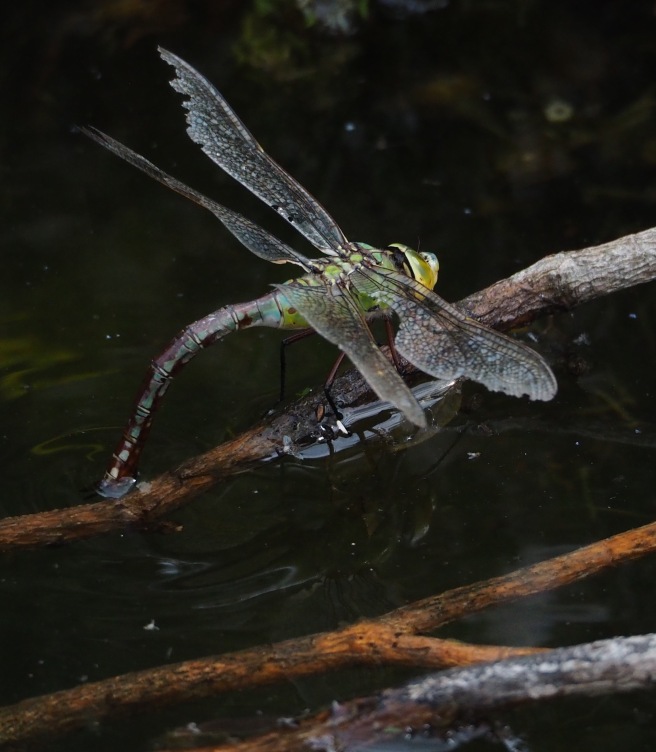 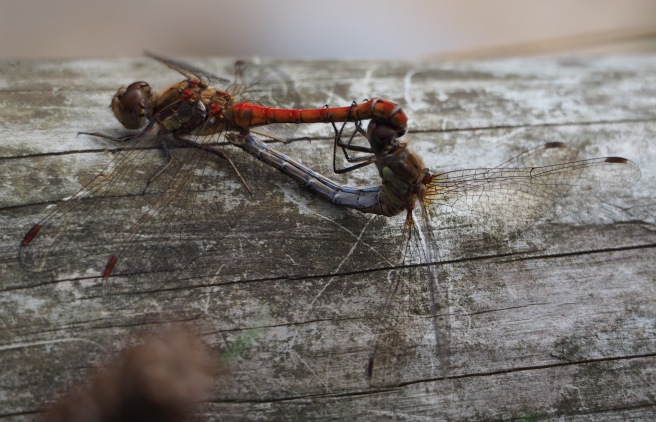 Then they were off, joined in tandem, the male lowering the female into the water so that she could lay her eggs: 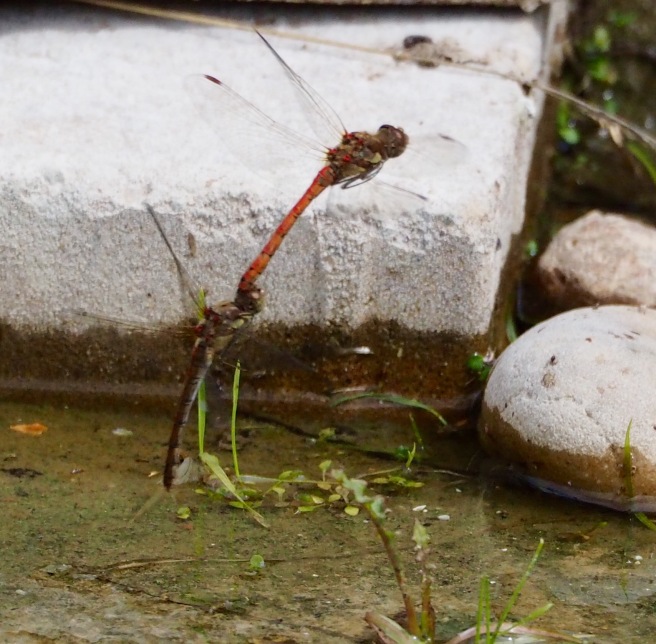 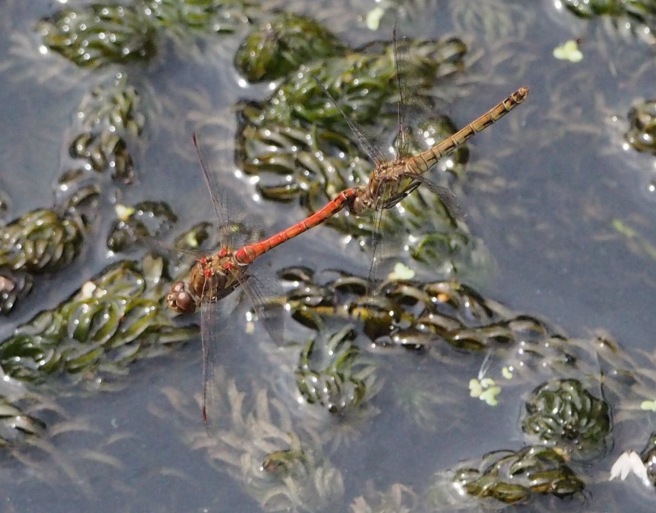 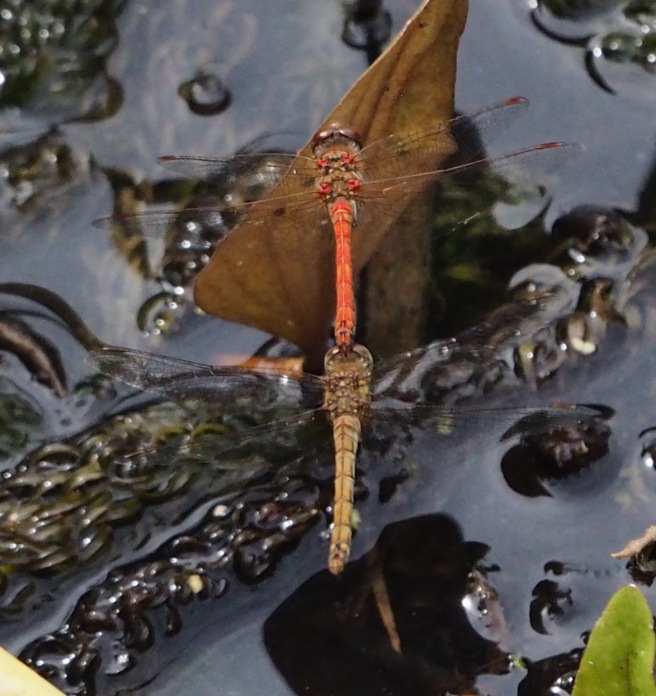 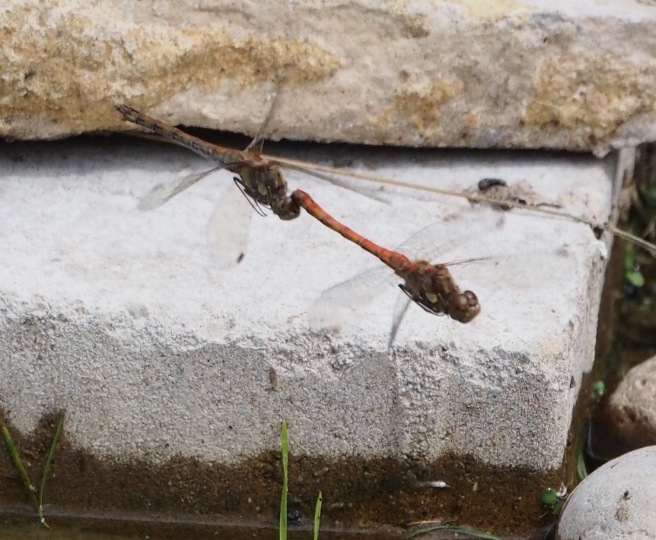 It wasn’t just dragonflies that were pairing. Small Heath butterflies were at it too: 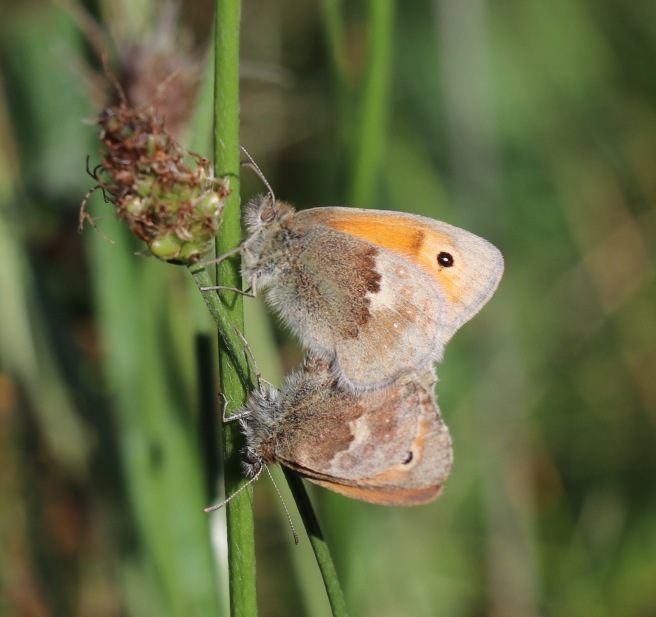 We had a poor year for Small Blue butterflies this year and this was because last year was a bad year for Kidney Vetch, the larval food plant, and not many eggs were laid. We are trying to bump up the Kidney Vetch that is growing here to support our population of Small Blues and so I have grown some plants from seed: 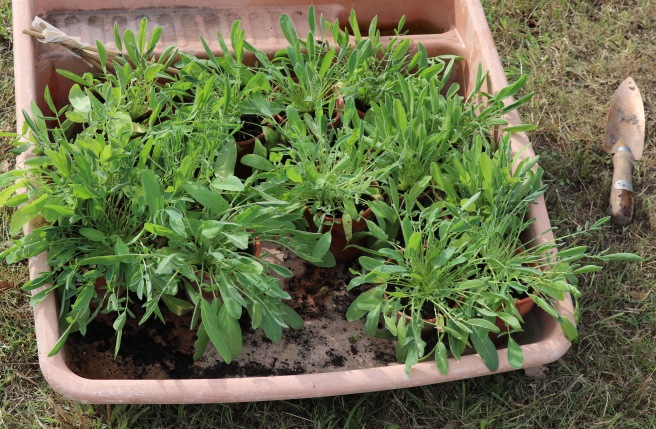 Today I planted them out near the wild pond which seems to be where the population is focused. Next year they should flower and be available should a Small Blue wish to deposit an egg.

A new plant has grown in the chalk ditch that we dug earlier this year. It’s Wild Mignonette (Reseda lutea). Mignonette, a plant of disturbed calcareous grassland,  produces a large amount of seed that then has the ability to survive in the soil for years. For a new plant to grow, the soil needs to be disturbed and this might not happen for tens of years. However, when it does, as this soil here was disturbed when we dug the bank back in January, the seed is there ready to germinate and the plant can reappear after many years of absence. Well, its lovely to see it – I wonder how long the seed had been waiting. 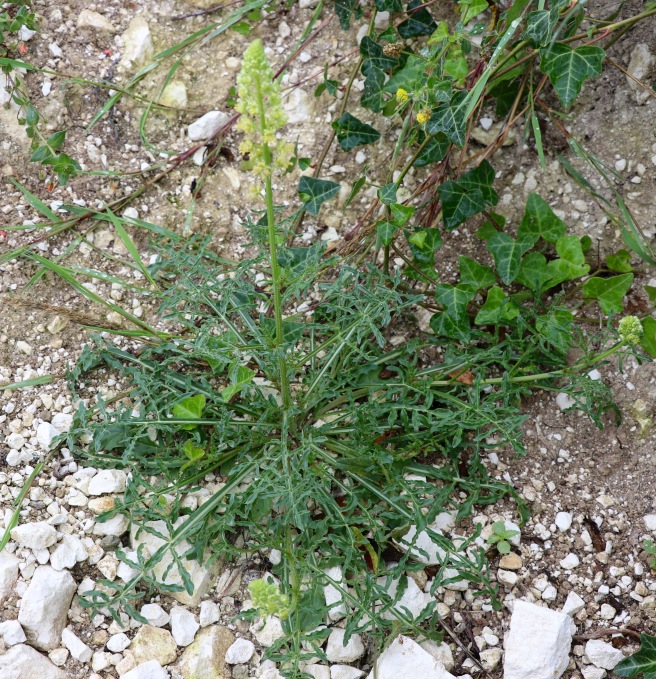 Another plant has reappeared in the last few days, but, unlike the Mignonette, this plant comes up every year and its arrival is eagerly anticipated by us as the summer starts to head towards its conclusion. It is the orchid Autumn Ladies Tresses, a specialist of short calcareous grassland and we get quite a lot of them growing here:

Badgers start to feed up and put on fat as we approach Autumn. Here are the four who live here and they are doing just that. It’s always reassuring to see all four of them together to know that they are safe and accounted for. 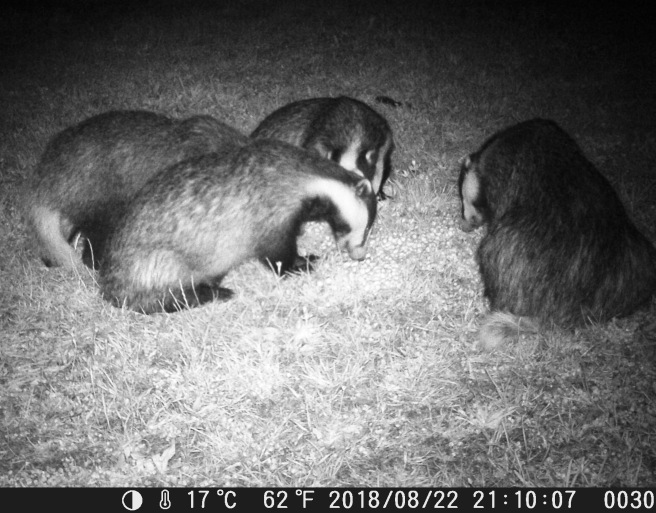 I include this photo below as my final flourish because I really like it. Although the actual face has been burnt out by the infra red, you get a second chance to see it in the reflection. 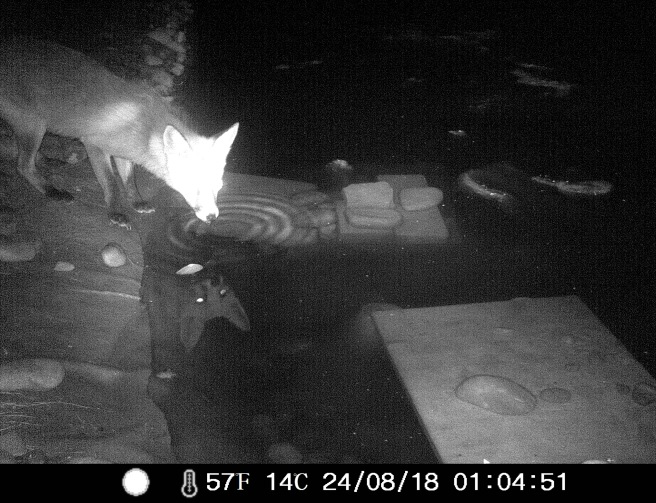