Something eats an awful lot of snails around here. There is always a littering of shells on the pathways, empty but otherwise intact.

There has been a recent succession of photos of Magpies carrying snails. 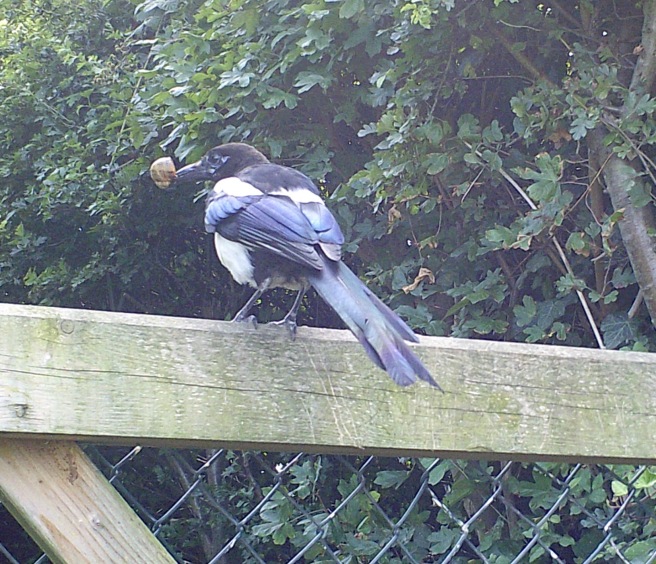 Could they be who is eating so many? Would the shells then still be intact or would they damage the shell getting the snail out?

One snail-eater who definitely damages the shells when extracting the meat is the Song Thrush and the camera that takes videos along the cliff edge has been getting footage of Song Thrushes smashing snails on a stone:

Unfortunately the stone is just below the reach of the camera but there is an accompanying sound track of the pinging noises as the snails are hit on the stone. A photo taken leaning over the fence shows the stone now being rather slimy with a carnage of numerous smashed shells lying nearby: 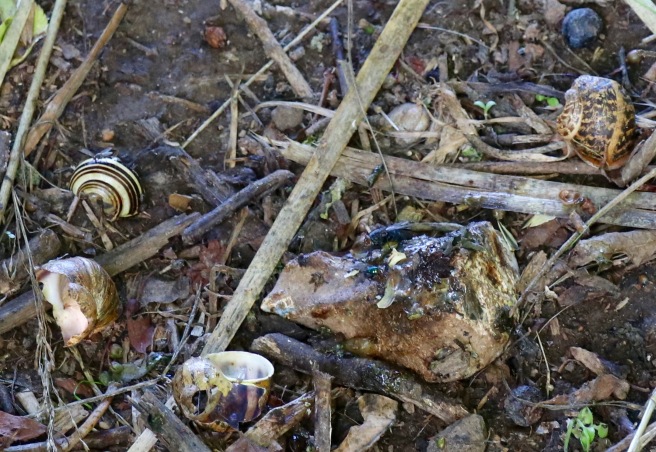 Interrogating the internet on snails gets a depressing return of hundreds of entries on how to kill them, using pejorative vocabulary  to suggest that they are nasty slimy things only fit for annihilation. There is very little information on their place within a natural ecosystem. But clearly they are forming an important part of the food chain here.

Slow Worms also eat snails. The ecologist who recently visited us to see if our meadows were an appropriate place to relocate a population of slow worms that are being displaced by upcoming development nearby, suggested that we planted areas of nettles because they are very good for snails which, in turn, were fantastic slow worm food. (I absolutely don’t want to plant nettles)

Maybe all these snails are being eaten by our resident Slow Worm population although we remain sceptical and will continue to see if we can shed any more light on this.

So far we have identified 5 species of snail here:

Top to bottom in the photo above we have Cornu aspersum (the Garden Snail), Cepaea nemoralis (the Brown-lipped snail) and Aegopinella nitidula (Smooth glass snail).

We also have Cernuella virago  (the Vineyard snail) and these ones: 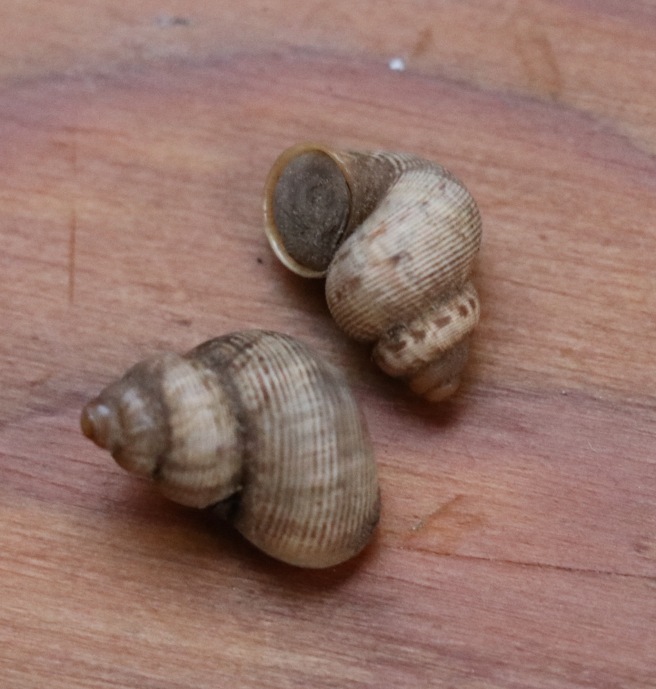 This is the Pomatias elegans, the round-mouthed snail or also called the land winkle because they look so much like winkles. These two shells above were still being used by the snails and so we put them back where we found them.

Moving on from snails to Linnets. The bird ringer who uses these meadows was interested in trying to ring some Linnets because they are a species he has never managed to ring before – maybe one or two in his whole ringing career. To this end, we put some oilseed rape seeds down along the weedy strip. When we were putting supplementary feed down here in the Spring, we were attracting a lot of Linnets down.

Within a couple of days, the Linnets were back on the strip and so we let him know that anytime he wanted to try to catch them, we were ready for him:

Today was the big day and he put just one net up between the weedy strip and the hedgerow:

Well, he had a fantastic morning, the final tally of which was: 12 Linnets, 2 Willow Warblers, 2 Whitethroats, 1 Lesser Whitethroat and, surprisingly, 1 Reed Warbler. He was delighted with that and is returning next week and putting a run of three nets up to see what that does.

Just finishing today with butterflies, because we are having a good year for the Wall butterfly on our hands. Every year we see one or two, but yesterday we saw up to 8 of them in one circuit of the meadows. Perhaps that doesn’t sound like loads, but for Walls these days, I think thats very good.