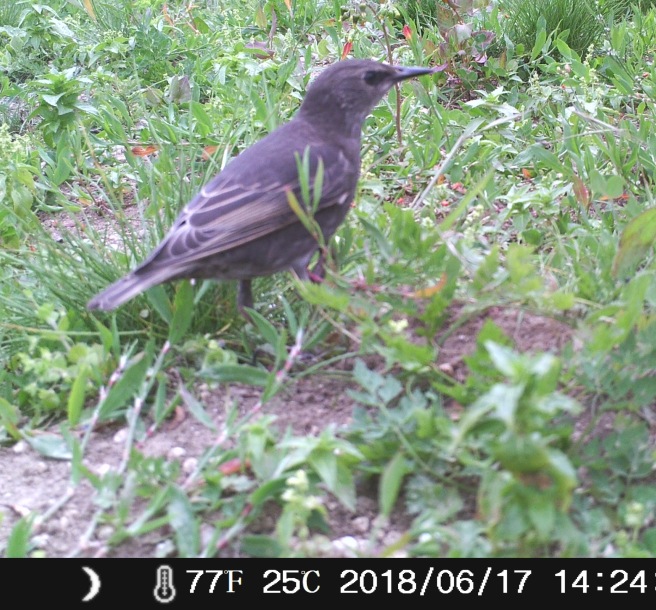 This slightly sinister looking bird is actually very good news. Its a juvenile Starling. The UK’s resident, breeding Starling population, as opposed to the ones that just spend the winter here, are doing very poorly and no one quite knows why. So it’s nice to see that they have been having some successful fledging here this year. Not just one success, though. We have a big gang of successes roaming the meadows in a noisy flock – about 40 to 50 young birds, rising and falling into the long grass.

Their parents will have gone straight on to have another brood and so they have had to leave their first set of offspring to fend for themselves. These juvenile Starlings gather together in flocks and rampage around the countryside. It’s lovely to see so many of them, especially since we haven’t seen a single Starling in previous summers here.

I am not sure why this juvenile was checking out one of the nest boxes though:

As far as we know, this box is unoccupied (officially a Woodpecker box although it had Great Tits in it last year!)

Oh dear, I took my eye off the Alder Buckthorn trees and now I see that several of them have been completely stripped by the Brimstone Butterfly caterpillars. I moved some of the most precarious cases, such as these two above, across to other trees that have a few more leaves.

We planted these bare-rooted Alder Buckthorn whips last year specifically to support Brimstone Butterflies who lay their eggs only on these trees. However last year and now again this year, the small trees get such a hammering from the caterpillars that they are never going to get a chance to grow. I think we need to buy and plant some larger, more established trees this coming Autumn that might have more resilience.

I mentioned in my last post that we were yet to see Marbled White Butterflies. The very next day, they had arrived:

I think that marks the proper beginning of Summer.