We have been away for a lot of April and not been here for over two weeks. The trail cameras that are taking video soon ran out of batteries in our absence and so it is only on our return when we changed the batteries and put them back out on the cliff  last night did we discover that this year there are two baby badgers. They are now being brought up to the surface for a while each night to start exploring and learning about their new world:

They are being watched over by their mother very attentively and she spends much of the night sorting them out. So she is having to extend the time she is out finding food for herself into the daylight hours: 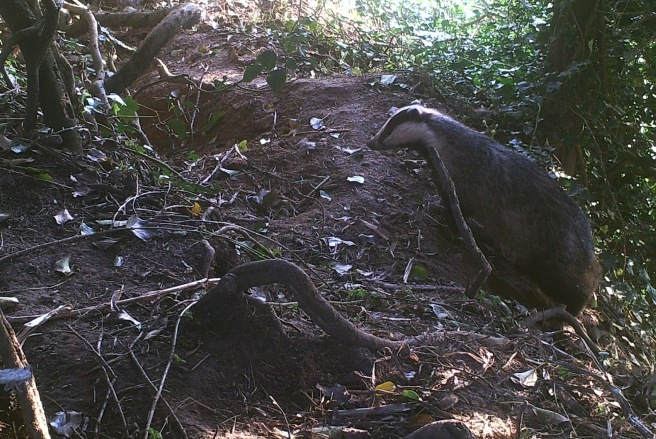 I hope to get better footage of these babies over the next few days, now that we are back up and running.

Meanwhile, other cameras managed to keep going without running out of batteries or falling over! Here is a male Black Redstart on the perch. This is an exciting bird: NB I am subsequently editing this becauseI think this is a male Redstart rather than a Black Redstart

The camera trained on one of the pond beaches captured 14 different species of bird coming down for a drink or a wash and here is a selection of its photos:

The camera on the other side of the pond also had this:

We looked to see how many of the Red Mason Bee cocoons had hatched out while we were away. One was in the process of hatching as we looked:

One other cocoon had also already hatched and the bee flown, but 23 still remain unhatched.

And given that it was such a nice day today, we had a look to see what was warming up under the reptile squares:

So many Slow Worms!

So that is what we have managed to capture of things that been going on here over the last couple of weeks. Spring has progressed a lot since we left and there is now a lot of catching up to do…

One thought on “It’s Twins!”