This little chap was munching his way through a leaf of the Holm Oak: 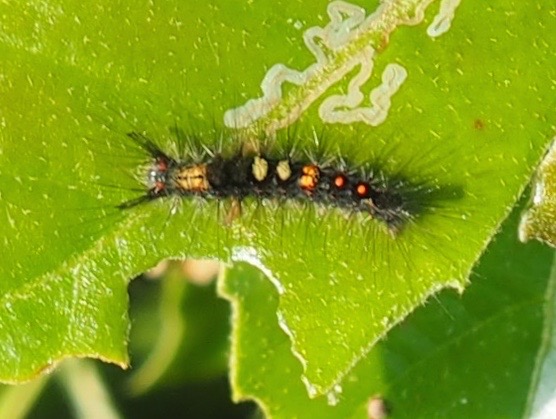 Its the caterpillar of the Vapourer Moth (Orgyia antiqua).

What I didn’t realise or had forgotten with caterpillars is that they repeatedly shed their skin, possibly as many as five times before pupating, each time growing a slightly larger skin – each stage being called an ‘instar’. This caterpillar here is an early instar since the later ones have more tufts, up to four of the white tufts for instance by the end.

Here is another photo from the side. How peculiar is he? 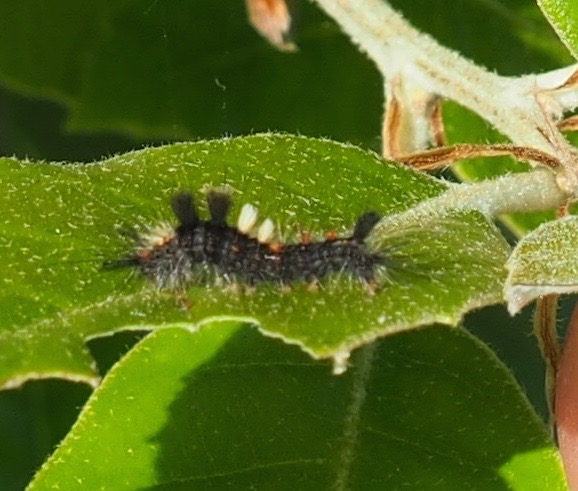 But the oddness of the Vapourer doesn’t stop there. Once the adults emerge from the pupae, the females are flightless and look like maggots with legs or maybe something from the woodlouse family. Its a moth but without proper wings. The males fly around and do come to light so maybe one day will turn up in the trap. Its a common moth found in broadleaved woodland, parks, gardens and is occasionally so numerous in towns that it defoliates small trees.

Looking the moth up in my field guide, it says that the larval food plants are a wide range of native and planted oaks although not recorded on Holm Oak – which is exactly the tree we found it on!