After a particularly windy day, we found a tiny little nest on the ground, blown out of a hedgerow:

So delicate and soft, it had been woven out of Badger fur. But what sort of British bird would have a nest so small?

Well, it is lucky that we have the bird ringer to pose these questions to – apparently this is just the soft nest lining of a bigger nest, possibly Chaffinch. I love that the birds have been out collecting Badger fur so that their babies can be comfortable.

The bird ringer was back ringing in the meadows in a lull in the weather this week.

He mentioned that the young Kestrels are now old enough to be standing at the entrance to their nest in the white cliffs. We high-tailed it down there that very afternoon:

Two chicks were visible in the nest and this adult female was immediately below the hole:

As we walked further along, we think we found a second Kestrel nest. Certainly a Kestrel briefly landed at it which is what drew our attention:

If you peer into the photo, it is just possible to see a fluffy white chick within this black hole – we could see it much more clearly through our binoculars. This nest hole is lower than the original one and I am hoping it will be possible to get better photos of this nest as the baby gets older. 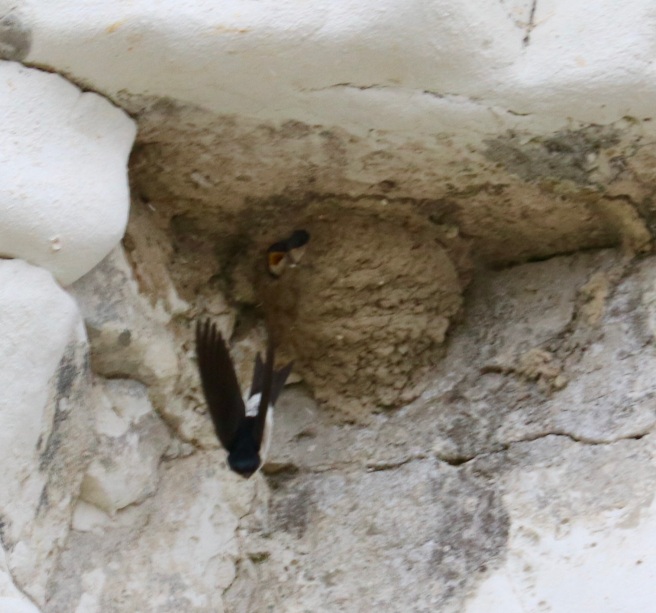 We also saw this Seal:

I am not very familiar with Seals and I reminded myself yet again about what the differences between Grey and Common (or Harbour) Seals are. This next photo from the internet shows the larger Grey Seal in the middle with the Roman nose. The Common Seals on either side have a different face shape – almost a snub nose.

So that would definitely make our Seal a Grey Seal.

A few miles north from here, the River Stour enters the sea and last summer we took a boat trip along the Stour as far as its mouth where Seals are known to haul out.

Now that I have revised again the difference between Grey and Common Seals, I see that these were definitely Common Seals:

However, it is Grey Seals who haul out onto the Goodwin Sands when they are exposed at low tide. These notorious sands lie directly offshore from the meadows and have been responsible for thousands of shipwrecks over the centuries, although these days they are surrounded by lightships and warning buoys. Two ships, responsible for looking after these structures, often come and drop anchor alongside us. The Patricia and the Galatea look quite similar and we get confused between them, but it was definitely the Galatea that was here overnight this week:

Although not so much in the news these days, the issue of migrants coming across the channel to land at this part of the coast is still very much on-going – all the more perilous for these people in this time of pandemic. Border Force vessels maintain a presence in these waters and are a familiar sight to us:

Another week further on into the summer and all seven Badgers are still present and correct at dusk when the peanuts go down. Those headlights in the top left hand corner are the eyes of a Fox that is having to wait until the Badgers have finished before it can move in:

Here are the three Fox cubs and their father seeing if the Badgers have left them any peanuts: 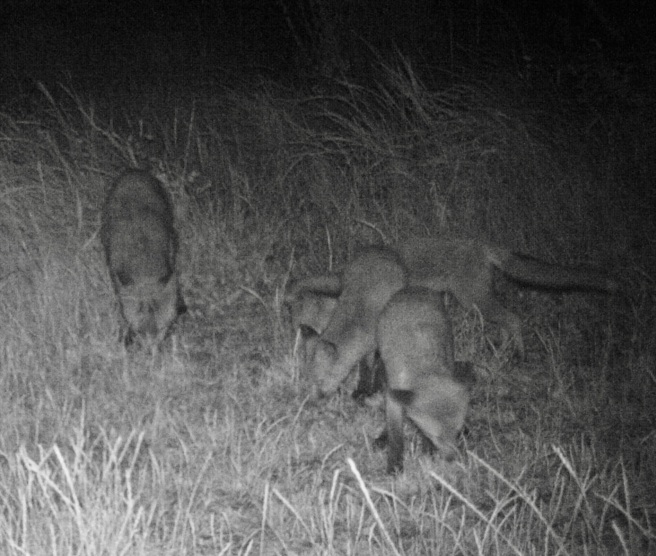 But the Fox cubs have now discovered that food is also going out onto the pinnacle where the Badgers don’t go:

We can’t have a whole post without the one-eyed vixen appearing and here she is on the right with one of her cubs.

The bird ringer tells us that the Grey Wagtails breeding in local chalk rivers have already finished their second broods and may be going on to a third. So this bird is most likely to have fledged from one of the first two broods and is now dispersing.

We liked this photo of a Blackbird flying off from the strip with a sunflower seed in his beak:

We had been keeping this gate between the two meadows propped open during the pandemic so that the bird ringer didn’t have to touch any infrastructure when he came to do his ringing. However, we missed seeing the variety of birds that perch on it and so we have now closed it again unless the bird ringer is expected. In particular, it is a favourite spot for the Sparrowhawks to rest a while and watch for their unfortunate prey: 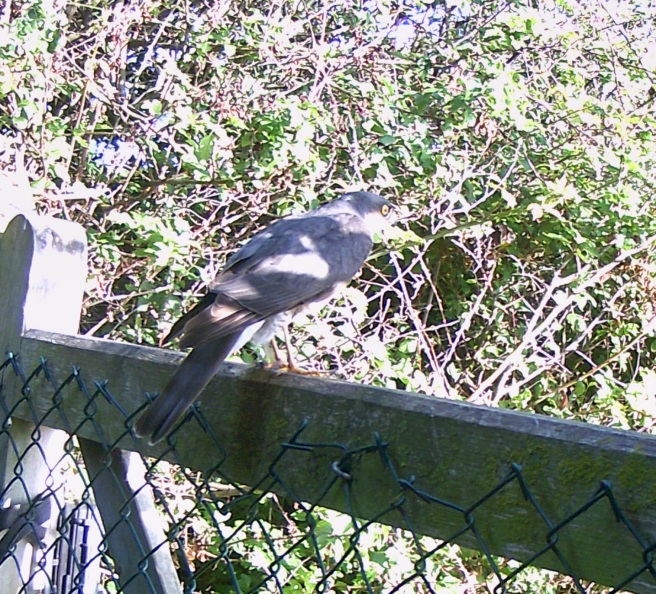 In the past week, the grasses seem to have gone much browner as we approach high summer:

In the wood, we saw about twenty Peacock caterpillars prominently placed on a patch of Nettle at the woodland margin. Nettle is the larval food plant of this Butterfly. 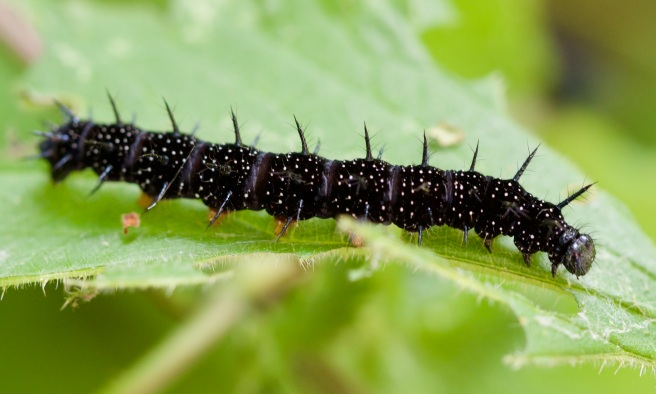 These Caterpillars will have been all living altogether in a communal web when they were smaller but, now they are close to pupating, they have become solitary, sitting fully exposed on leaves. They will pupate and then hatch out as second brood adults during the rest of the summer. At the beginning of September they will find somewhere safe and protected to hibernate over winter as adults so that they can be one of the first Butterflies on the wing next year.

The farm that runs alongside the wood changed hands last year and the new owner has taken it out of agriculture and is managing it for nature. This spring, he planted thousands of young trees in the field next to our wood. This is such a dry part of the country, we were wondering how he was going to keep them watered this summer whilst they establish themselves. Well, we now have our answer because he has built a temporary water tower in one corner of the field:

There continues to be a tremendous number of Great Tits visiting the deeper pond at the wood. I count fourteen of them in this photo below. We are taking credit for this, whether justified or not, because we think that these are families recently fledged from the nest boxes.

The Green Woodpecker nest in the Cherry Tree that we were watching must surely have failed because all activity there abruptly stopped. We are also not seeing any juvenile Green Woodpeckers on the cameras. Here is an adult bird: 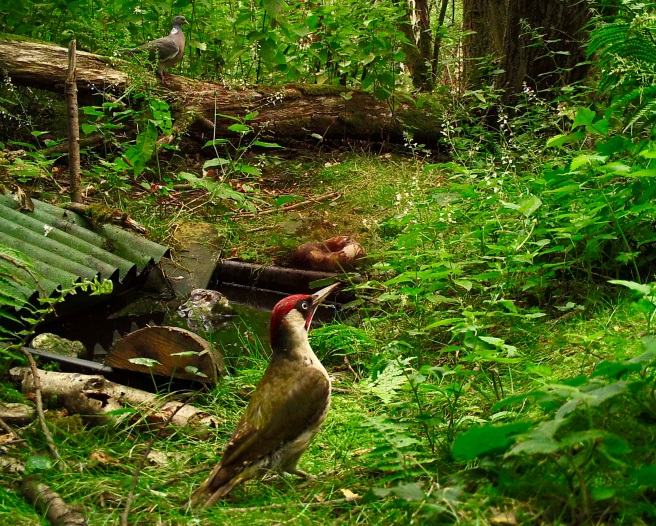 A lovely shot of a Jay: 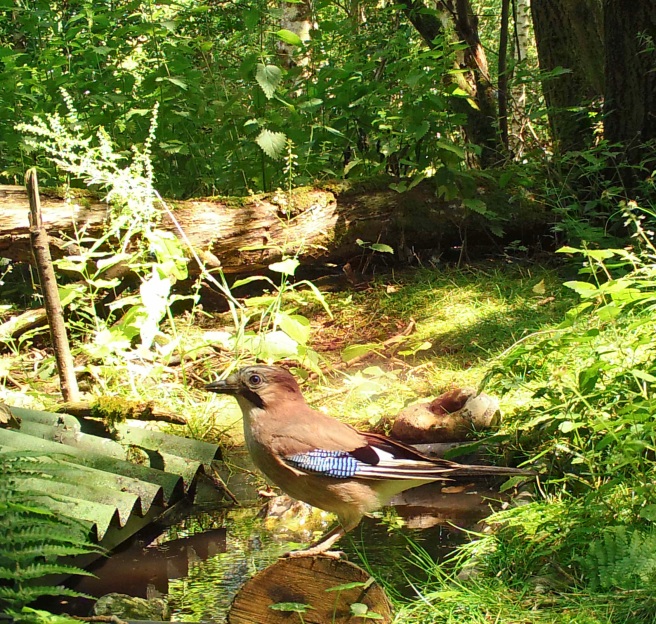 And we finish today with a Badger, looking absolutely right and at peace in its woodland habitat.