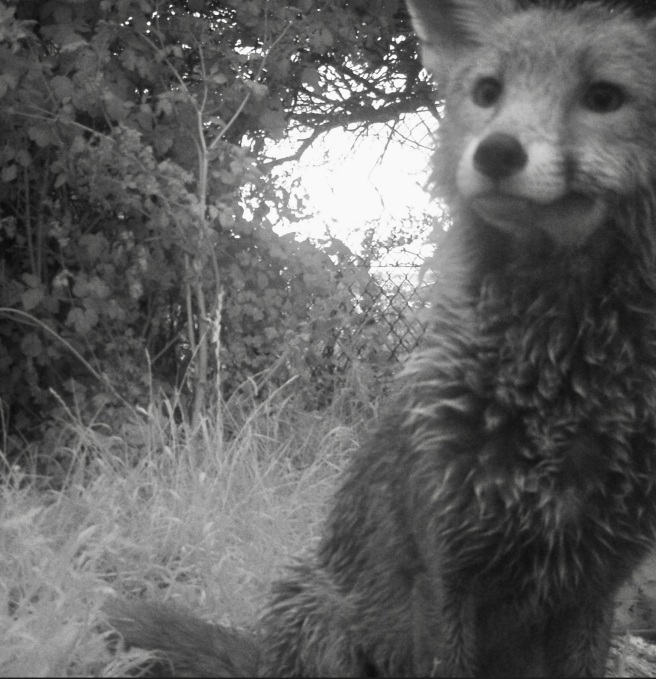 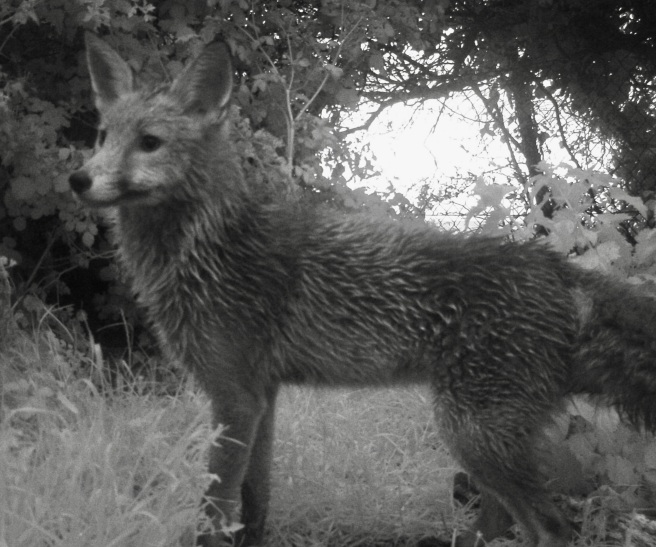 A wet Fox! We have had some rain – not enough to make any noticeable difference to the gasping ponds but we will gratefully accept what we have been given. The rain gauge reports that a glorious 20mm has fallen in the last week.

This week we went to nearby Lydden Temple Ewell nature reserve, 220 acres of chalk grassland and a wonderful haven for Butterflies in July and August. At this time of year there are hundreds of Fragrant Orchids out, although they are really small with so little rain this spring.

We also went up to Sandwich Bay to see the Lizard Orchids. They are such odd plants:

They too looked like they have been affected by the dry weather, although I think we were also a bit early for them. We will try again in a couple of weeks – its good to have a reason to go off to such a lovely place, although the dog will insist on barking at the waves.

Last year, Sandwich Bay Bird Observatory had a major fundraising effort to buy the land  in which they had dug their scrape. They had previously been renting the land but, now that they have bought it, they have been able to increase its size and carry out all sorts of other improvements. Unfortunately, its grand opening is currently put on hold.

Now, as we drove past the newly dug banks, Poppies were having a complete field day on the disturbed soil.

It was an absolute spectacle. I hadn’t previously considered the wildlife credentials of Poppies but we have noticed that the few here in the meadows are really attractive to Bumblebees and other pollinators:

So what a nectar bonanza all those Poppies on the banks of Restharrow Scrape must be providing this year.

2020 is meant to be the year that I am focusing on improving my Bee recognition skills and, since there are lots of Bumblebees about, I am concentrating on them for now. The UK has only 24 species of Bumblebee and so how difficult can it really be? The answer appears to be that it’s actually quite difficult – certainly that’s what I’m finding.

The Vestal Cuckoo Bee will seek out a Buff-tailed Bumblebee nest, kill the queen, lay her own eggs in the nest and the Buff-tailed workers will then look after the Cuckoo Bee young rather than the young of their own species.

I feel on much firmer ground with Moths and Butterflies. We saw the first Burnet Moths in the meadows on 10th June:

There are quite a few splodges of shockingly day-glo orange Slime Mould growing on a Dog Rose in the hedgerow. Slime Moulds live freely as single cells when their microorganism food is abundant. But when food becomes scarce, many will come together and start moving as a single body as is happening with this one below. Apparently there are a few bright orange slime moulds that look like this one but, if it goes on to produce fruiting bodies, it might be possible to then properly identify it. 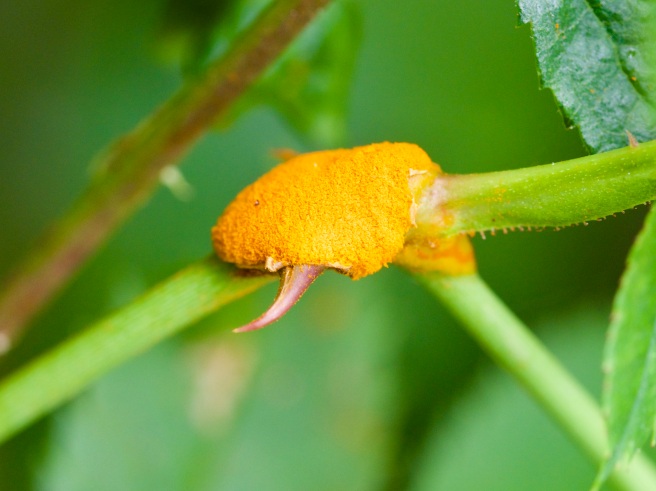 We found this dead Pygmy Shrew and what a nose it has:

Pygmy Shrews are much smaller than Common Shrews but we didn’t have both to compare and we also didn’t take any measurements. Pygmy Shrews, however, have a proportionately longer tail to body length as this internet photo below shows and so I am reasonably confident that this is a Pygmy Shrew. 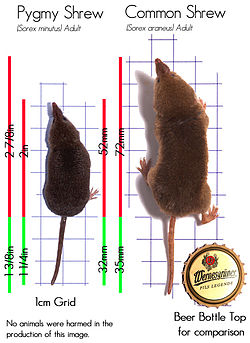 Shrews are killed by Kestrels amongst others but are often found abandoned by their predators since glands in their skin produce a foul tasting liquid.

The flock of around fifty young Starlings still remains a prominent feature of meadow life at the moment. 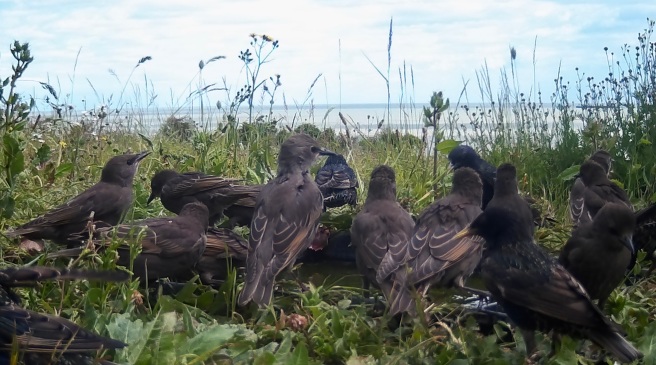 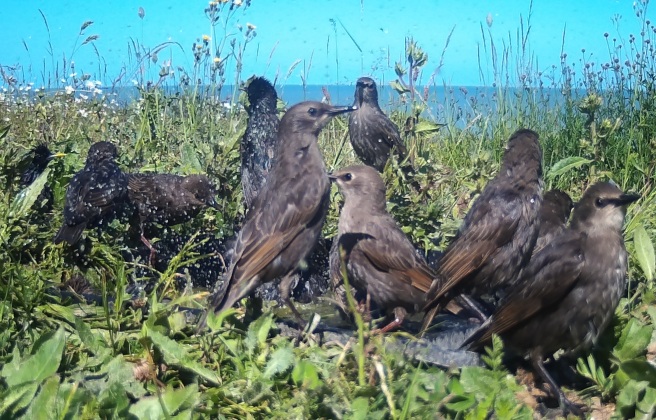 I include this photo of a Carrion Crow because it puts me in mind of a Victorian lady in mourning with her jet black skirts.. 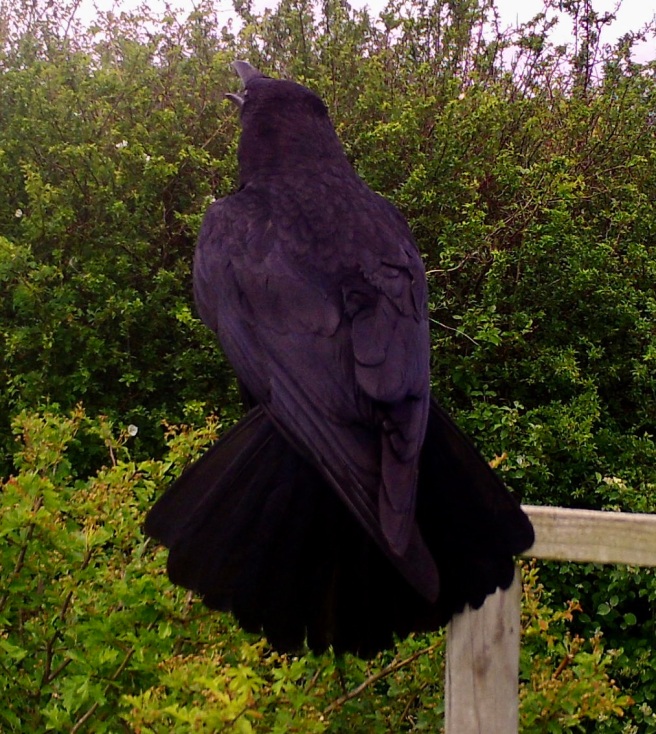 ..and this one looks a bit Dickensian as well:

Just when I thought that I had understood what was going on with Fox cubs this year, one night there were three of them. We have only seen three the once this year:

Is this third cub also the offspring of the one-eyed vixen and her mate?

Since I stopped treating the Foxes for mange about a fortnight ago, the one-eyed vixen has very rapidly developed another balding area behind her ear. This is so depressing – I thought she was better.

I have been in touch with The Fox Project again and they have recommended now trying a different treatment – Psorinum 30c. As with the Arsen Sulphur that I was previously using, this remedy is again made from natural ingredients and it does not matter if an uninfected Fox or other animal takes it instead of our target animal. It is a one-week treatment and has been found to be effective on Foxes with up to 40% hair loss due to mange. It should arrive early next week and fingers crossed that this works for her.

She is the only one of the resident Foxes that now has mange. The rest of the Foxes here are looking great:

The Badgers are looking good too, although we do have concerns about that little one. The triplets are now not far off the size of their parents:

An enormous yacht sailed past us this week – the people standing below the beam help put the thing in proportion. If those are people, how tall is that mast?

This yacht is Geist, 34 metres by 7metres, and she has just been built in Britain – in the Spirit Yachts Boatyard in Ipswich, Suffolk. She was only launched on 4th March 2020 and is the largest single-masted wooden yacht to be built in the UK since 1930.

She is indeed a luxurious superyacht. She flies a Portuguese flag and so I wonder if she was sailing past the meadows on her journey from Ipswich to Portugal.

My final photo for today is of a beautiful sunset over the meadows this week – at this time of year this is at about 9.30pm, a fact that is almost unbelievable in the depths of December.

2 thoughts on “A Few Drops of Rain”