On 3rd January we completed on the purchase of a 6.5 acre wood over towards Canterbury. The purchase had taken months to complete but this date, coming as it did right at the very start of the year, seemed a very fitting beginning and has allowed us to spend a complete calendar year observing the wood as it rolls through the seasons. It’s a beautiful wood, two sides of which overlook farmland. A third of the wood is a regenerating area where mixed native species have been replanted within the last 20 years. The remaining two thirds are mature woodland with a central core of Silver Birch surrounded by many varied tree species. 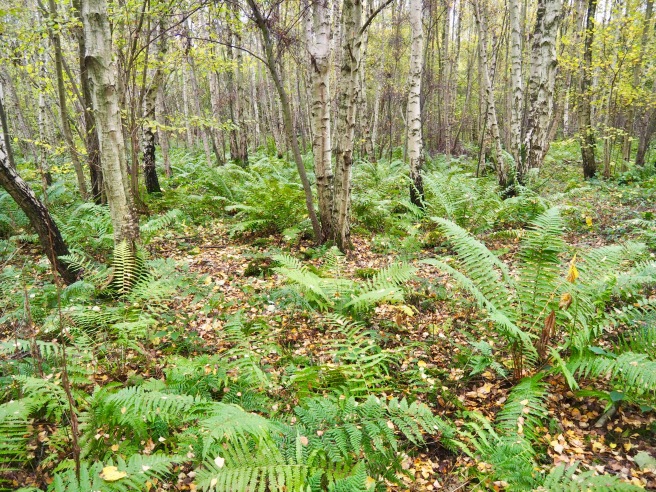 The Birds in the Wood:

Soon after taking over in the wood, we put up Owl and other raptor boxes along with some smaller bird boxes:

However, perhaps we were too late because the big boxes have remained empty, but we now have got hopes for next year. All of the six smaller boxes, though, were occupied successfully by Blue and Great tits and we have recently put another six up as well.

We know that we have got Tawny Owls in the wood because, in the spring before the ground got too hard, we saw them hunting for worms. 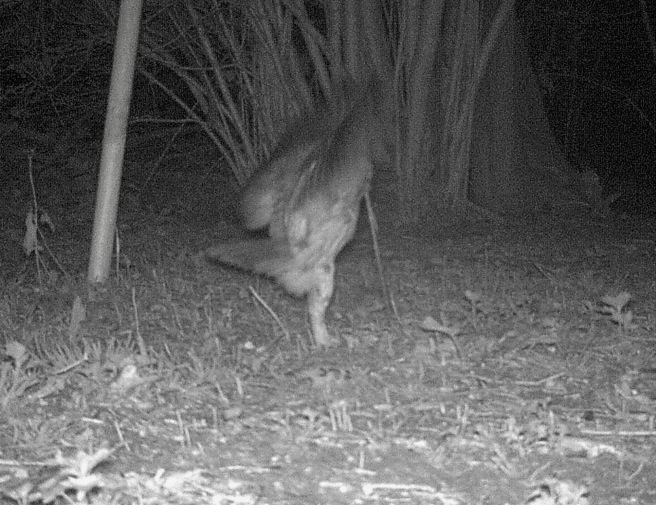 In the heat of the summer, a Tawny also regularly came to drink and bathe in the shallow pond that we dug:

We also know that we have got Buzzard – they are often heard and seen overhead.  In fact, there is a Buzzard nest in a Silver Birch at the heart of the wood and this had fresh Rabbit bones under it when we viewed the wood last year. However, it was not used this year – a pair will have several nests and don’t occupy the same nest in successive years:

In the long summer drought, a Buzzard was also coming down to use the shallow pond: 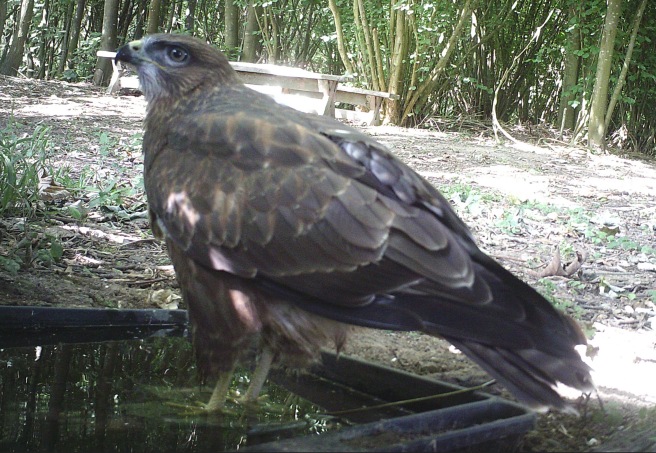 Other birds have been ringed here during this first year:

The female Woodpecker that was ringed went on to nest in one of the Cherry Trees at the edge of the wood. We put a trail camera on the nest:

Here is one of the juveniles with its red cap looking out of the hole:

A pair of Bullfinch also started coming to one of the ponds every day in the spring:

Then, at the end of July, we are delighted to see three juveniles starting to come as well:

Woodcock overwintered on the floor of the wood and every time we explored in January and February we would put a few up:

There used to be a large shoot here until recently and we have seen some species that they would have been aiming at:

Other birds seen that I got excited about were Lesser Redpolls:

And a Pied Flycatcher on its autumn migration through the area:

At the end of our first year, we have 32 bird species on the Wood List.

The Mammals in the Wood:

Although other parts of the larger wood have reported seeing Deer, we have not seen any in our wood. We have, however, seen Badgers, Foxes, Rabbits, Grey Squirrels, Stoats and Weasels as well as Rats, Wood Mice, Voles and Shrews:

We put a Mustelid box with a trail camera inside into deep vegetation to see if we could get a Stoat or Weasel to come in and have their picture taken. This hasn’t happened so far but all sorts of other animals have popped by:

The Plants in the Wood:

In the September before we bought the wood, we were very fortunate that an expert Botanist came round it with us and recorded 73 plant species that she could see evidence of at that time. Of these, 14 were indicators of ancient woodland and 8 were labelled ‘worthy’ plants (a few fell into both categories). Some of them have fantastic names such as the Ploughman’s Spikenard (Inula conyzae), whose roots are spicily aromatic and were used as a poor-man’s aftershave by country folk in simpler times.

It has been so interesting watching how the wood became clothed in different plants as the weeks rolled by.

In March and April it was all about Primroses and Violets: 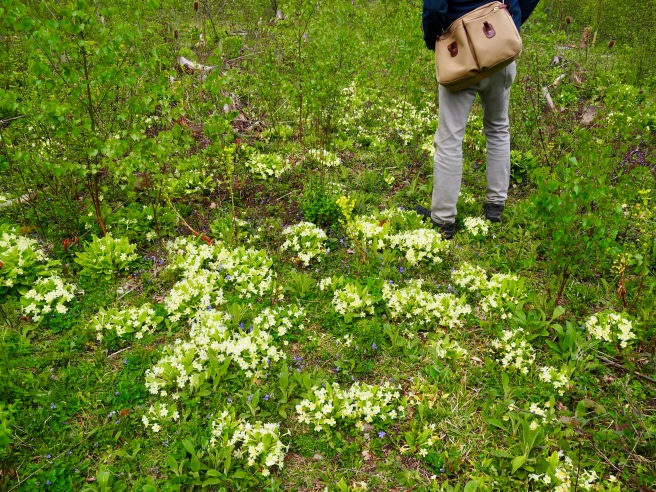 In May, a dauntingly luxuriant growth of Nettle came up in an area that we suspect may have been used for feeding game birds in the past: 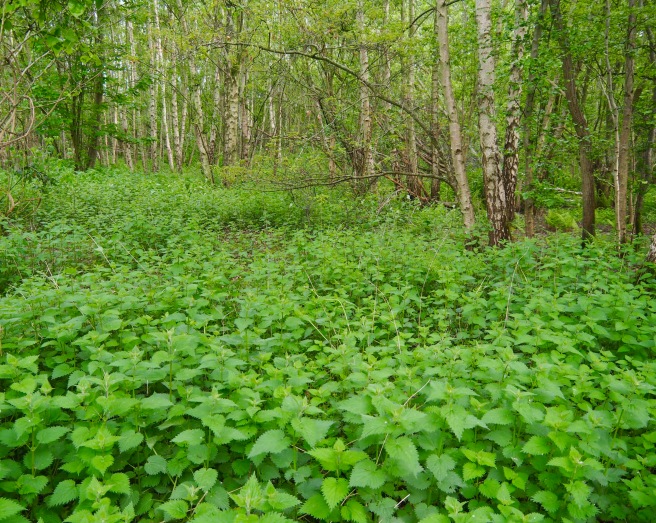 In another part of the wood, Lady Ferns, Male Ferns and Broad Buckler Ferns flourished amongst the Silver Birch: 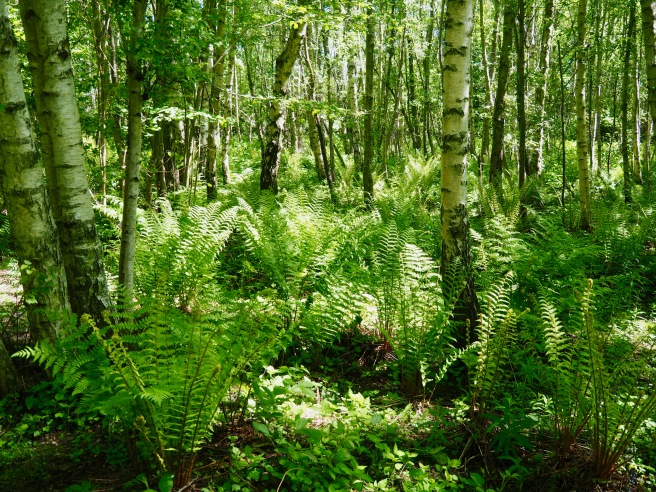 In July, the understorey was dominated by Enchanter’s Nightshade (Circaea lutetiana) with its delicate flower spikes floating above the foliage:

Two other memorable plants were Moschatel (Townhall Clock) in March:

and a patch of Twayblades – a type of Orchid –  in April:

The Insects of the Wood:

We have been identifying lots of woodland-specialist insects throughout the year. But the insect highlights were seeing White Admiral and Silver Washed Fritillary Butterflies in July – both are exciting woodland species.

We saw a total of 12 Butterfly species over the course of the year.

In October we went on a coppicing course in the Malvern Hills and we have now started coppicing the Hazel in our own wood on an eight year rotation. We hope that this is something that we are going to be able to manage on our own, but my goodness it is very hard work:

In November, an expert on Dormice from the Kent Mammal Group visited the wood to advise on how best to manage it for Dormice. The Hazel coppicing rotation is important for them but we are also going to plant more native Honeysuckle – Dormice use Honeysuckle in all sorts of ways.

She also talked to us about the best ways of finding out whether we already have Dormice in the wood – they are nocturnal and mostly live up in the tree canopy when not hibernating and so they can be tricky to spot. She recommended footprint tunnels and we will put lots of these up next spring.

Towards the end of the year we had the most fantastic news. The farm that surrounds the wood changed hands and the new owner intends to take it out of agriculture and manage it for wildlife. 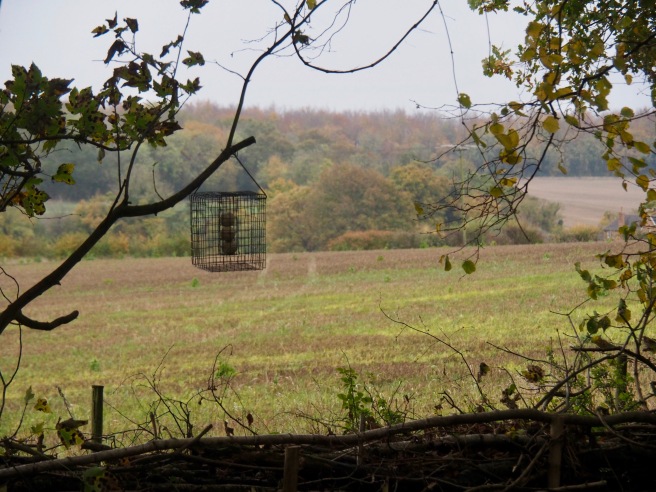 The plan is to plant lots of new hedgerows and thousands of trees. This should also have a really positive impact on the biodiversity of the wood and it is going to be so interesting to see how this project progresses over the coming years.

After all the scary politics dominating the headlines for the last few days, I have really enjoyed escaping and immersing myself in the wood to write this review. I will also do a Review of the Year for the meadows before the end of the year.