In a couple of days, it will be five years since we bought the meadows. That’s half a decade under our management. Looking back at some of the early posts from when I started this blog, I am amazed and embarrassed at how little we knew back then – five years of obsessively studying two meadows has worked its magic.

Here are the meadows on the day we took them over at the end of November 2014:

The first impression may be that there is not very much difference, but the wild pond down by the gap in the hedge, the new linear wood down the right hand boundary, the insect hotels and the mosaic areas of longer grass hopefully tell the story of wildlife-sympathetic management over the last few years.

The linear wood in the meadows was planted in the winter of 2017/8 and since then there have been two hot drought summers and it has been a bit of a struggle at times. But on the whole, it is doing alright: 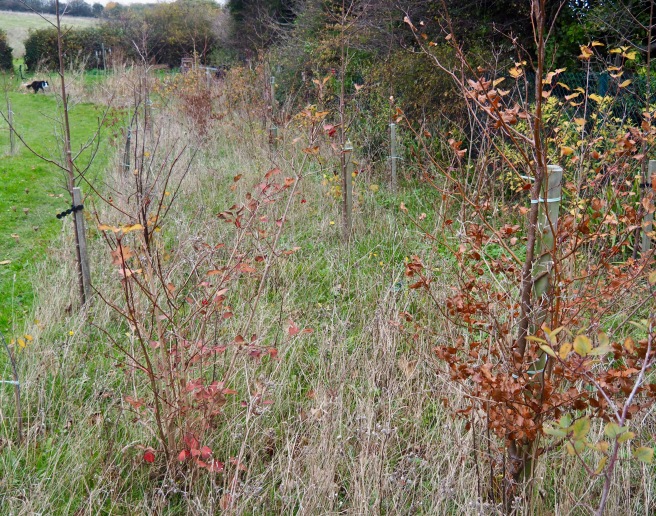 A few of the trees have been lost but most remain.

An ecologist from the Kent Mammal Group has come to visit the proper wood to give us advice on how to find out if we have Dormice there and how to best manage the woods for them. 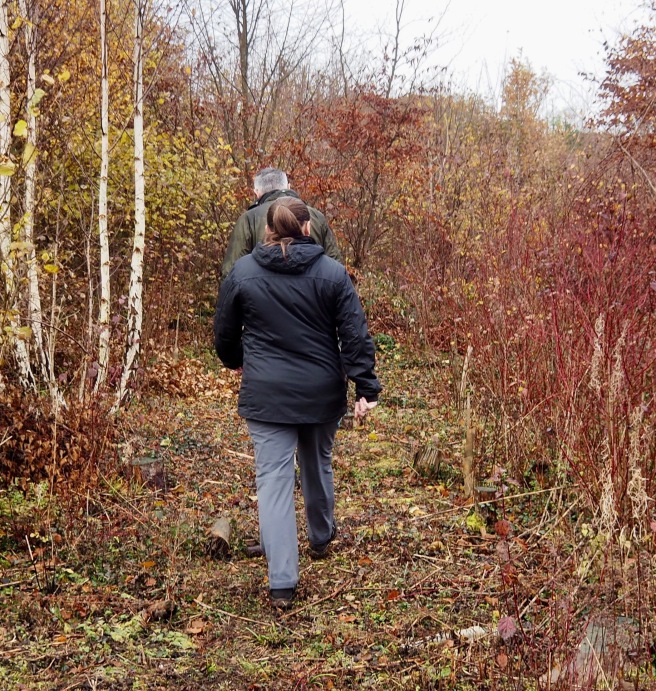 At the end of her visit we knew a whole lot more about how Dormice live their lives. There are no records of Dormice in the immediate area. However, having seen the wood, she thought it was quite likely that we did have them – after all, they are nocturnal and live in the tree canopy when not actually hibernating and so they are easy to miss.

As a result of her advice, our plan now is to put out some Dormouse Footprint Tunnels in April in the Hazel-coppiced areas of the wood. Tape covered in an ink made out of a charcoal/oil mix is placed at either end of the tunnel.

Then we will have a bit of a learning curve to identify a Dormouse’s footprint but apparently they are very distinctive.

Honeysuckle is very important to Dormice, not least because they use the Honeysuckle bark to make their nests. Another job for next Spring is to plant more native wild Honeysuckle all around the woodland boundaries.

Establishing a rota of Hazel coppicing so that an area is cut every winter will mean that there is always Hazel of the right age producing heavy crops of nuts.

It is completely wonderful that busy people will give up their precious spare time to come and help us with the wood. It also turns out that she is really interested in Bats and will revisit the wood next May to teach us to use our Bat detector properly and help us survey the wood for Bats.

We have a few ongoing projects at the moment. The first one is to deter the Heron to protect our amphibians in the pond. We made a grid of string across the pond, hoping to restrict the Heron to just one area:

However, the Foxes repeatedly gnawed through the string. We have now put logs down so that the string on the banks is down at grass level and this appears to have solved the Fox problem: 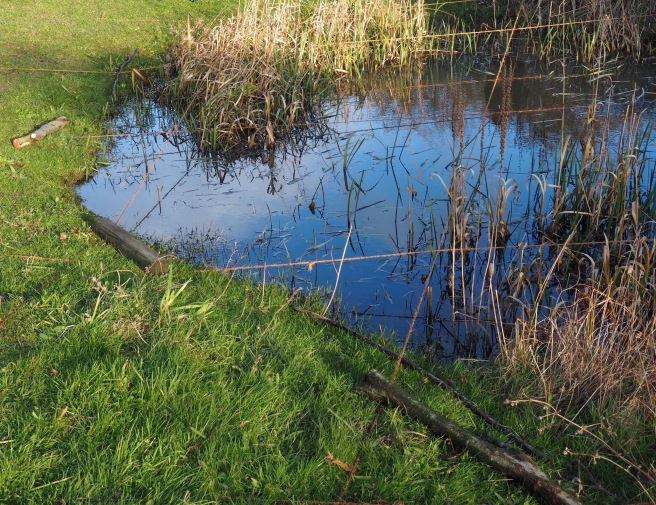 When the Heron next arrived, it seemed very unsettled by the new set up and hasn’t now returned for several days:

However, we have the feeling that we may have won this current battle but we haven’t yet won the war.

We are putting seed down on the strip throughout the year to support farmland birds. Our second ongoing project is to stop this seed being quickly hoovered up by the big bully boys meaning that there is never any left for the small farmland birds that we are trying to encourage.

This cage below protects some of the seed from the Crows, Magpies, Woodpigeon and Foxes. After putting down the seed, very quickly the only seed that remains is under the cage.

Dunnocks were the first birds to learn to enter the cage, quickly followed by House Sparrows and Robin.

There have also been Long Tailed Tit: 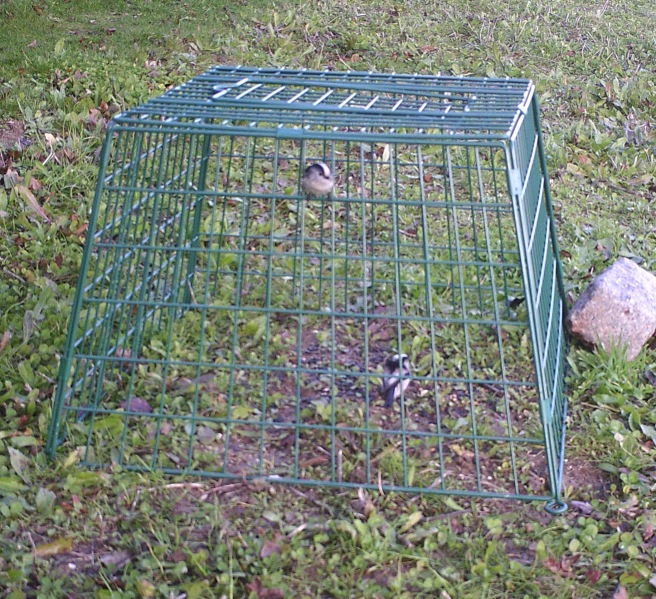 Stock Dove are difficult because they are excluded from the cage but we want to encourage them so we always also put seed down outside the cage as well:

The cage has successfully protected some of the seed, try as they might: 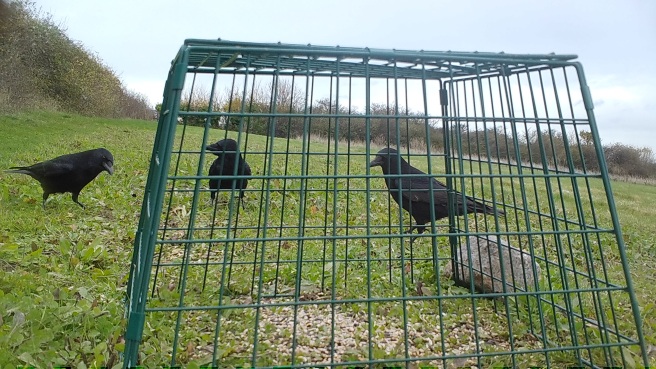 Yesterday there was a Yellowhammer on the strip, although not in the cage: 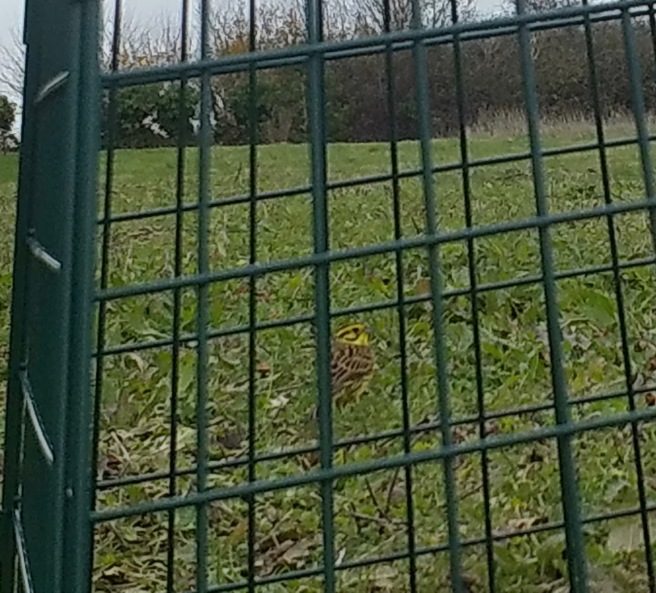 So, the cage looks like it is going to be successful and I have now ordered two more – another one with the smaller mesh that we already have, and one with larger mesh that should also let in Yellowhammer and Starling. They will arrive tomorrow.

The final project is a silly one – to get a good photo of a Fox on the stone pinnacle that we recently constructed in the paddock. I have been putting a few peanuts on it at dusk: 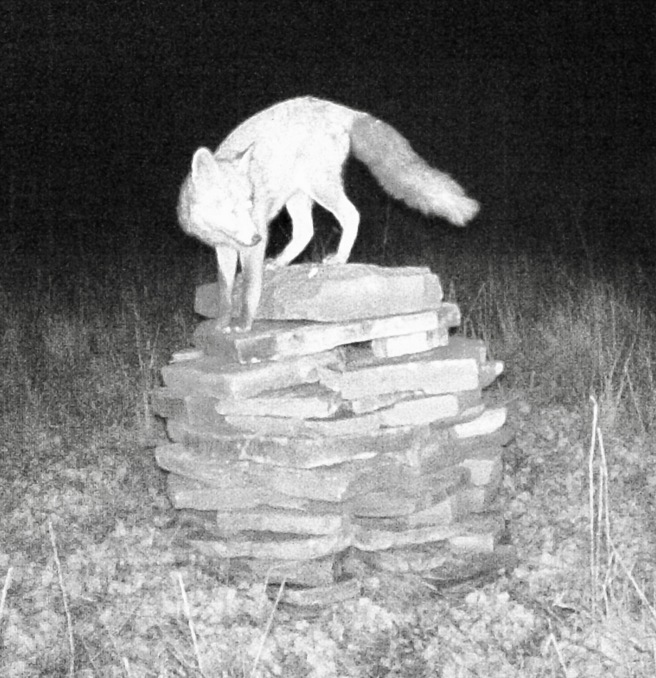 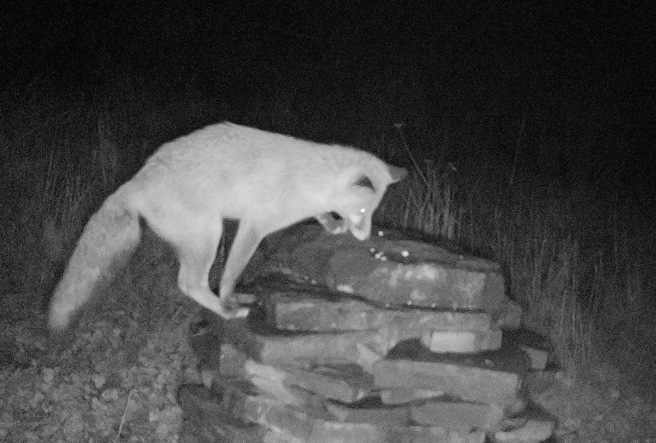 This morning I saw that they had left me a message, telling me what they thought of my stupid experiment: 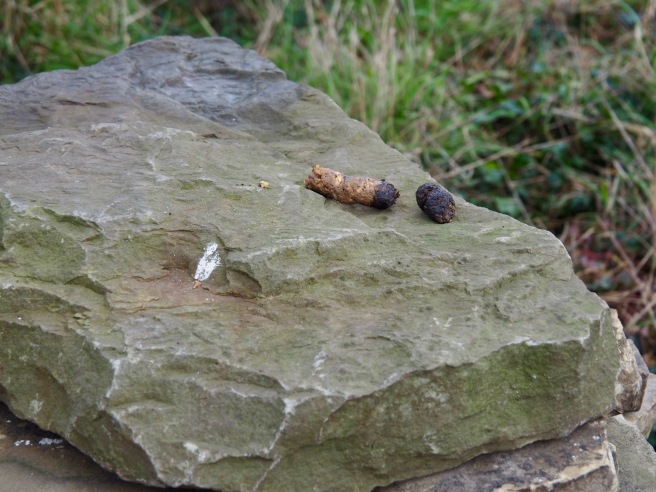 We have seen Blue Tits emerging from the Swift box which reminded us that the box is meant to be blocked off when the Swifts are out of the country. Before inserting some bungs, we put the digiscope camera in to ensure that the box was definitely empty: 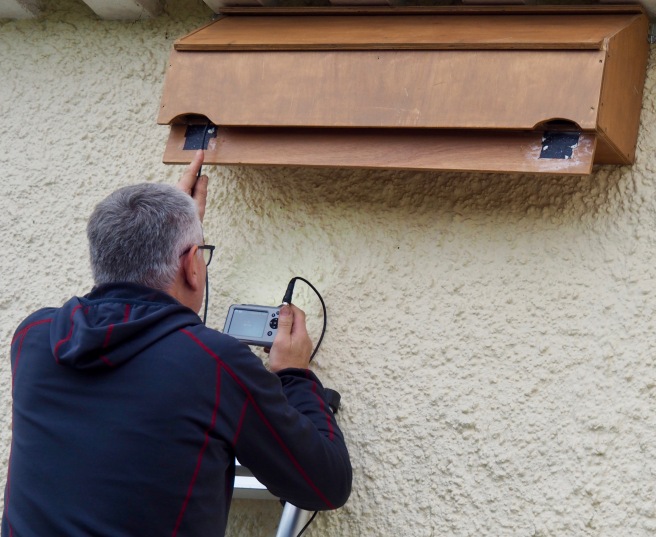 This photo is on its side. The shallow scrape has droppings – presumed Blue tit –  but no nest: 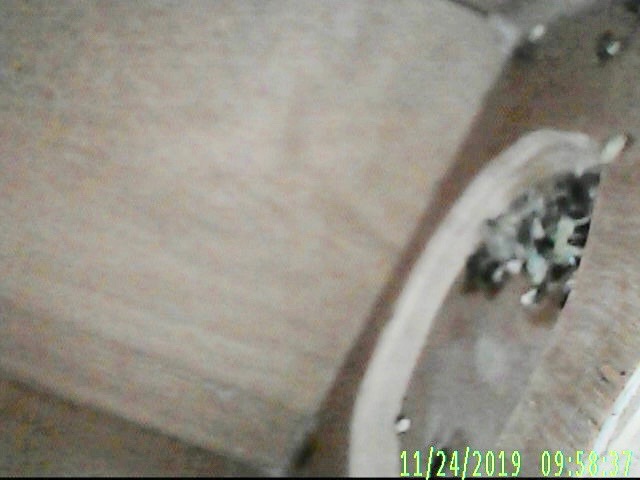 The box is now blocked off and the polystyrene bungs will be taken out next May as Swifts start to return from Africa:

I have some more photos from the meadows:

The last photos for today concern Calais. On a clear day, it is easy to see across to the white cliffs of France from the meadows using just your eyes. But, on a really clear day, it is possible to see Calais Town Hall clock using binoculars which is pretty amazing: