You have to be good with mornings to be a bird ringer – the best catches are usually soon after dawn. However, yesterday the bird ringer had been giving a talk in London until late the night before and only arrived after 9am in the meadows to set up the nets. But even so, he had a very busy morning with a lot of Chiffchaffs and Goldcrests:

He also had two ‘controls’ – a Chiffchaff and a Blue Tit. This is the word used when a bird has been already ringed elsewhere. Once the bird ringer has submitted his ringing data to the BTO, he should find out where and when these birds were previously ringed.

During the morning a Goshawk flew over – yes! A Goshawk. Sadly I personally missed this but I am told that it flew north to south over the meadows, was mobbed by Crows, and then turned round and went south to north. What an amazing bird to go in at number 73 on our meadows bird list (only two species added this year so far: Alexandrine Parakeet back in January and now Goshawk)

We went to a talk last night at Sandwich Bay Bird Observatory on Urban Peregrines. The man giving the talk also knew about Goshawks and we learnt that now is the time that young Goshawks (and Peregrines) start dispersing away from the nest area, sometimes flying long distances.

We don’t have a photo of yesterday’s Goshawk but here are a couple from the internet: 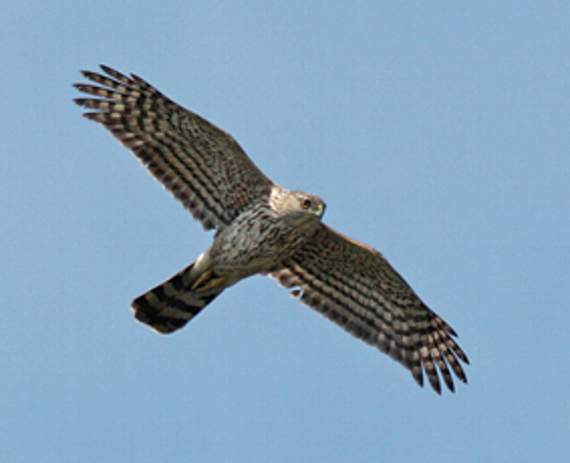 But the excitement didn’t stop there. A group of House Martins were noticed flying over the meadows and so a net was put up along a gap in the hedgerow and their call was played on a loudspeaker. Soon, the sky was filled with them. At this point of the year, when House Martins are gathering to migrate, they become extremely responsive to the call of other birds of the same species.

Before too long, many of them were in the net: 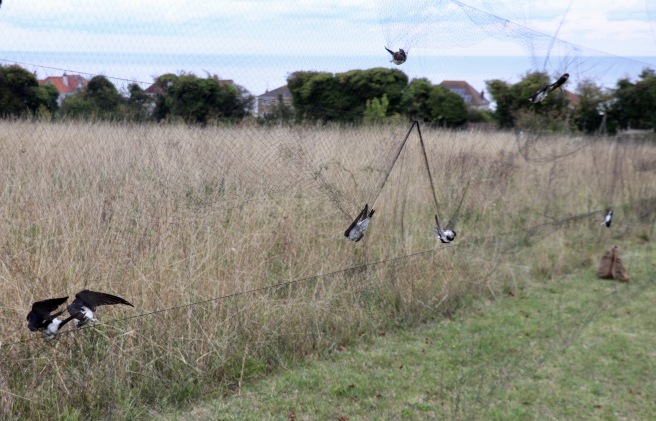 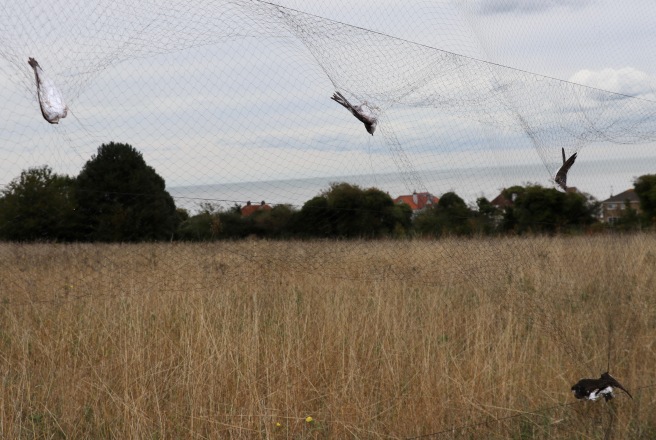 These mist nets have been well designed so that the birds become entangled but are not in any way damaged and all these birds were quickly processed, ringed and released, completely unharmed. Because there were so many of them, all that was done was a quick check of their age and a ring put on so that they could be off and away as soon as possible. They were all juveniles, born this year. So, just to be clear, that means they are all setting off on an immensely long journey across continents and mountain ranges to winter in the forests of the Congo Basin, none of them having done it before and with no adults to guide them. Completely amazing.

There were also some stowaways going along for the ride:

All the birds will have these blood-sucking Flat Flies  (or Louse Flies) on them. 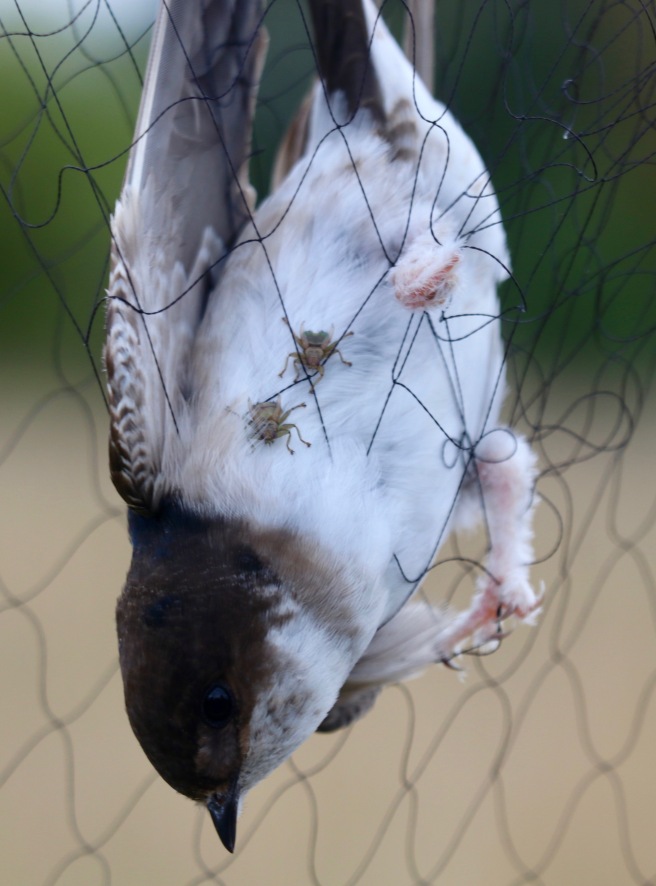 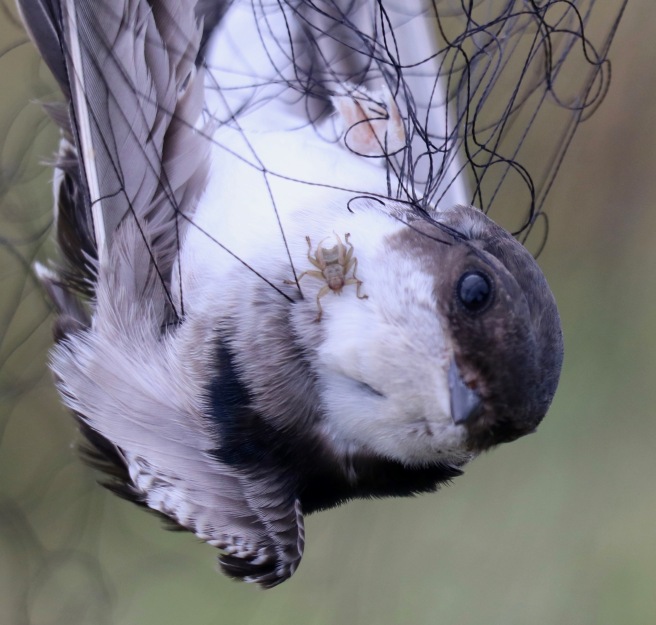 These will normally be tucked in amongst the feathers but they have emerged out of the plumage here because the bird had stopped flying whilst in the net.

These flies are members of the Hippoboscidae family. With poorly developed wings, they are unable to fly and their survival depends on the repeated use of a nest by the host. Their emergence from their pupae in last years nest is synchronised with the return of the breeding birds in the spring.

However, I have to tell you that these things were jumping off the birds and onto the bird ringer. He was very blasé about it but, if I didn’t already know that ringing was not for me because of the early mornings, this business with these Flat Flies would have knocked any budding desire to ring birds right on the head.

In the end 37 Martins were ringed and released and, in total, the bird ringer processed 96 birds during the morning. I say morning, but he was still here at 4pm.

In the early afternoon, this schooner sailed past:

This is the De Gallant, a sailing cargo ship. The concept behind this ship’s visit is exciting, inspiring and feels right out of the eighteenth century – the idea is that the community bands together and preorders food from various different suppliers from far off lands. These foodstuffs are then delivered using the power of the wind. In this case, a shop in Deal called Smugglers Records has organised the ship to moor off Deal beach and bring the food ashore. Because the food is bought in advance, the financial risk of the voyage is covered.  With the goods being collected directly from the ship or from whoever organised it, distribution and storage costs are low. People are encouraged to buy in large quantities to last a long time or to join together with others so that several kilograms can be delivered in a single hessian bag, thus reducing packaging waste.  Isn’t this all a wonderful thing to be doing? Smugglers Records are having a community party to celebrate the arrival of the ship – Deal is such a great town.

The ponds in the meadows are now starting to look more normal after all the rain that we have had. The plants in the hide pond were put into the pond in a hurry so that Dragonflies larvae could climb up them. Now that all of that is over for another year, we realise that the appearance of the pond is not very artistic and more should be done to make it aesthetically pleasing. But at least the blanket weed seems to have gone for now.

The wild pond looks great and we haven’t seen the Heron for quite a while:

But it is the small shallow ponds that continue too be more popular with the birds: 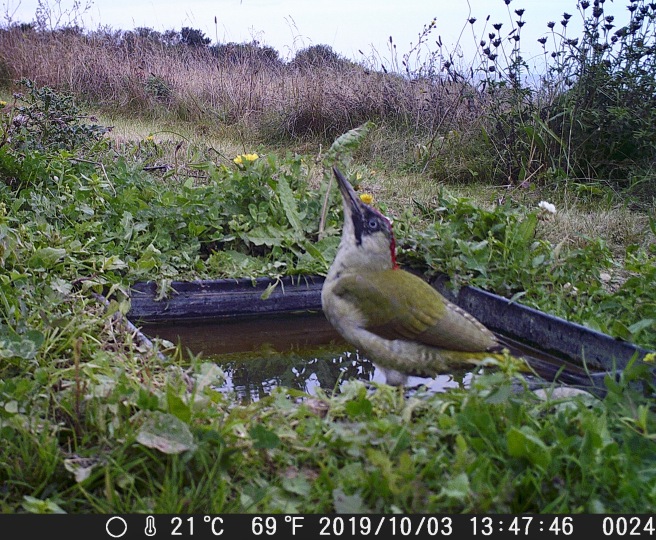 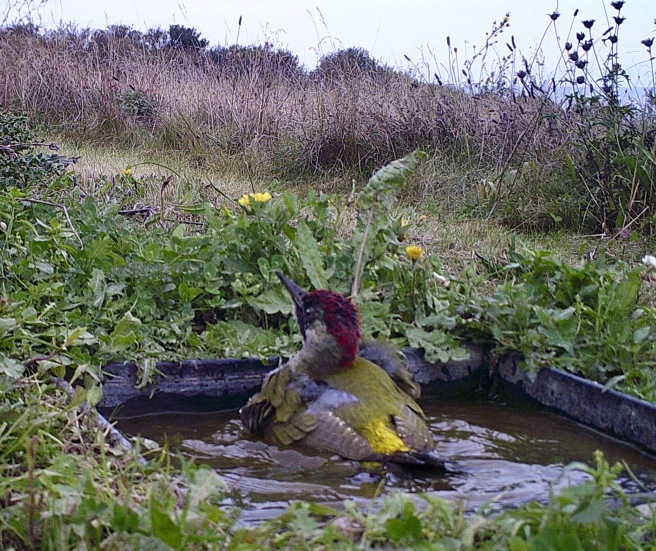 I finish today over in the wood where the female Sparrowhawk has been visiting the pond there regularly to take a bath: 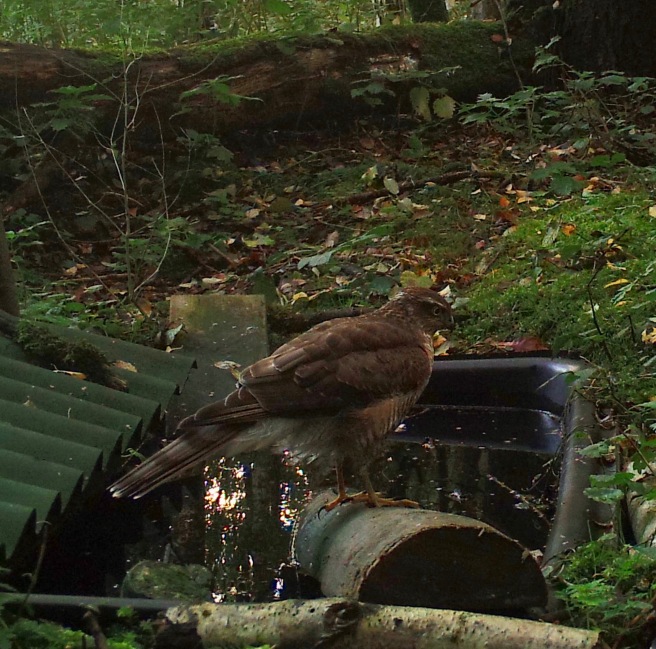 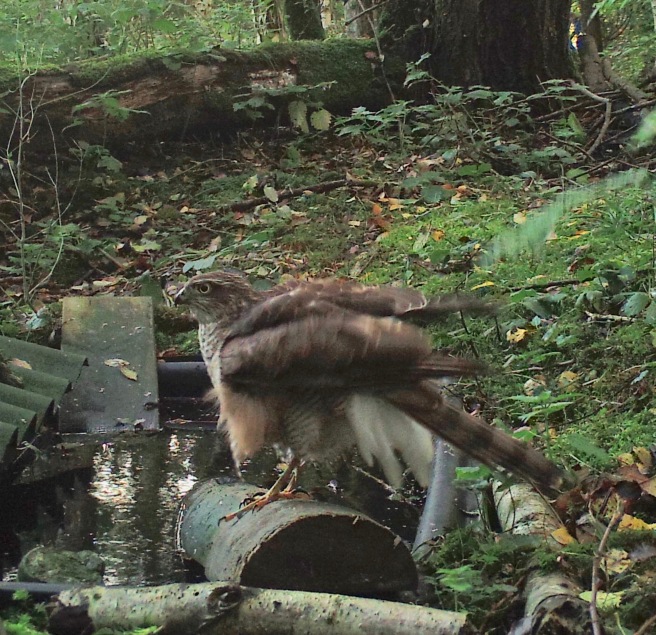 A magnificent but scary bird.