There have been a couple visits by the bird ringers to the meadows recently to try to ring the flock of Linnets that are feeding up on the strip. There has been a lot of tinkering with net heights and positioning but still these Linnets have largely evaded capture.

Today, however, the excitement was caused by a Meadow Pipit – often affectionately called a Mippit in the birding world – that came down to drink at the field pond and then flew into a net that was down by the feeders there.

These birds mostly breed in the upland areas of the North and West of the country but move south and spend the winter throughout Britain as well as in France and Spain. This bird was born in 2018 and will soon be moving back north.

An amazing thing about Mippits is this:

It is thought that their long hind claw is used as a sort of spring to catapult them into the air from the ground to escape predation.

Having spent many years living in the Thames Valley, we are very familiar with Ring-Necked Parakeets and we often had several at a time on our feeders there. There is also a population of them on Thanet but we had never seen one here in the meadows. However, about a month or so ago, we thought one had arrived. This bird is still being seen and heard daily although it actually sounds totally different from the Parakeets we were used to in the Thames Valley which we found very odd.

The bird ringers saw it today and they think it may be a larger Alexandrine Parakeet rather than a Ring-Necked one. Since we still haven’t managed to photograph the bird, here is a photo of an Alexandrine from the internet:

It is a bigger bird at 60cm to the Ring-Necked’s 42cm and has red patches on its shoulders. Interestingly, the British list of birds documents 13 species of Parrots spotted in the country and, of these, four species are well established as feral populations: The Ring-Necked Parakeet, the Alexandrine Parakeet, the Monk Parakeet and the Blue-Crowned Conure. I was unaware of all of that.

We will now try hard to get a photograph of this bird so that we can verify its identity as an Alexandrine Parakeet.

Although it was a misty night when this photo below was taken, I think it looks like a small herd of grazing animals and I like it: 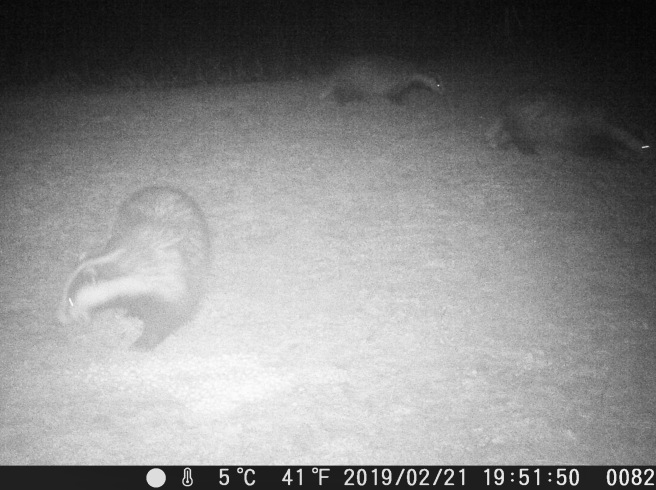 I also like this – the seed heads of the Stinking Iris, one of the two native Iris species in this country. These seeds look like they are trying to attract animals to eat them but nothing ever does so they must taste horrible:

In the wood, the new pond is starting to get lots of visitors. Here is a Badger drinking:

And a Song Thrush: 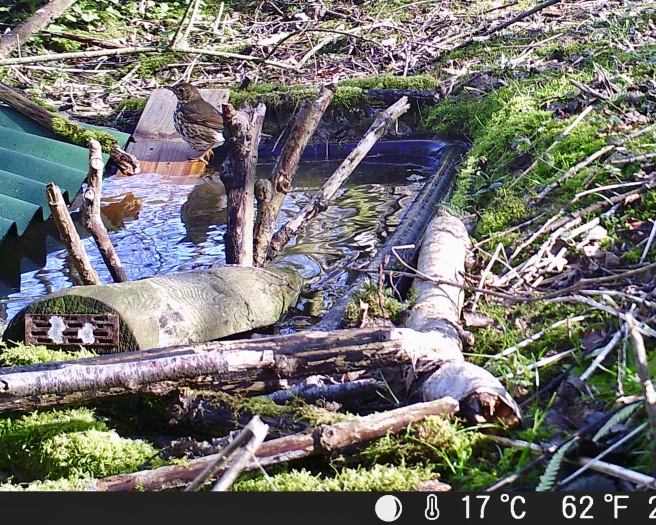 Finally for today, in the regeneration section of the wood, there are many tree stumps from when the last crop of trees was taken out. These are covered in moss and clearly are now functioning as useful look out podiums for Rabbits: