We have a new project starting: 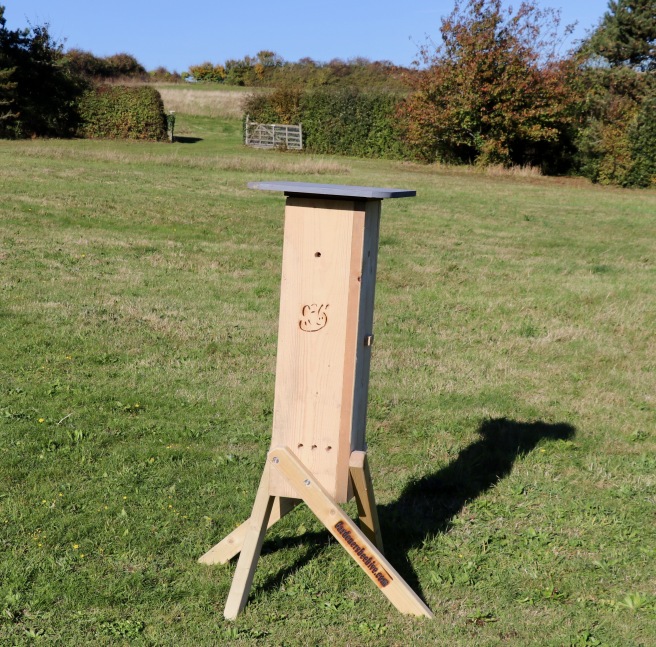 This is a Gardener’s Beehive – a home for Honey Bees that is designed to mimic a hollow tree stump which is where these bees would naturally make their home in the wild. A hive for the good of the bees rather than the production of honey. Once a swarm arrives at the nest, it will look after itself there with no further input from us and will stay for 5-7 years. We get the benefit of their pollination and the warm feeling that we are providing a home for them where they can thrive without interference. There is, however, the possibility of getting a small amount of honey from the hive once the colony has been established for a couple of years should we decide we want to do that. 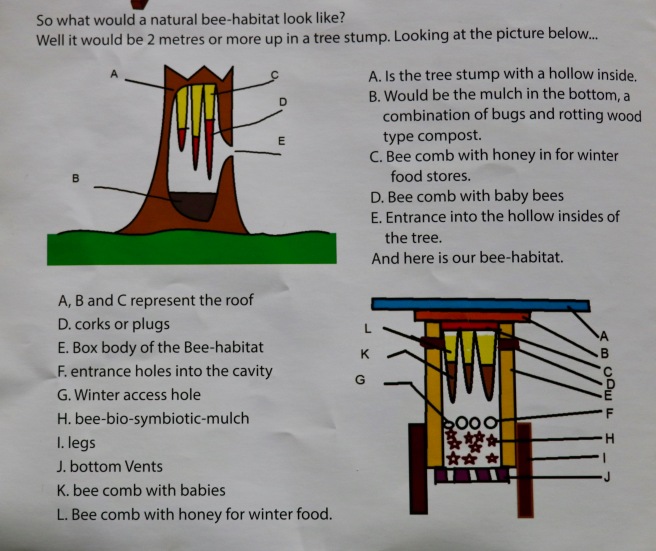 The instructions suggest that the hive is sited under a deciduous tree so that it gets a lot of sun in the winter but only about an hour of full sunshine once the tree has its leaves in the summer: The hive now has a few months to weather in before the bee swarming season starts in February. Also provided is a citrus oil lure which is sprayed onto the hive to catch the bees attention.

In these very skies above us here, the Battle of Britain was fought 80 years ago. Conflicts of a different sort are now going on above us as a Buzzard, like a large, heavy bomber, has started regularly flying over. A squadron of corvids quickly scrambles into the air and tries to see it off. Twice, it has been a Kestrel, a smaller and more agile Spitfire of a bird, that has mobilised and repeatedly dive bombed the Buzzard, calling loudly.

It is quite a spectacle for those of us watching from the ground. 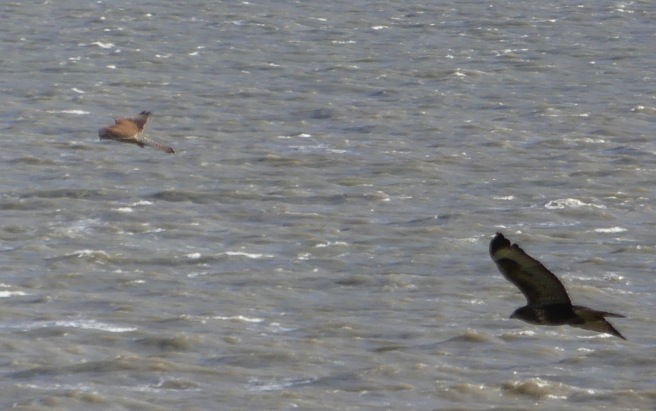 The weather recently has been mixed and we have finally, finally had a decent amount of rain and the ponds are starting to refill. Here is a rainbow, suggesting that a pot of gold may be buried in our hay pile.

Actually, we have realised that the badgers are rummaging in that hay pile – perhaps more to collect bedding than look for that buried treasure though.

Now that the stacks of reeds, that were much closer to the entrance to the sett, have been exhausted, they are having to look elsewhere. Recently we did pull some long grass and put it on the now-emptied reed pile and wondered how long it would be before this grass was dragged underground. The answer turned out to be less than an hour, as Scarface collected it as soon as it got dark: 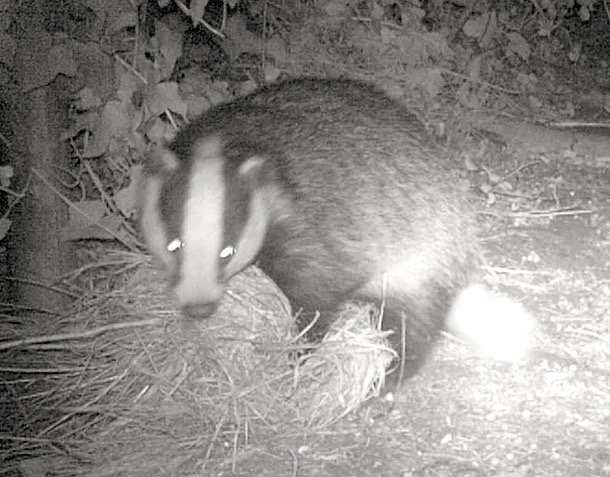 It seems a long time since we have had the lovely sight of a wet and muddy badger after a hard nights digging around: 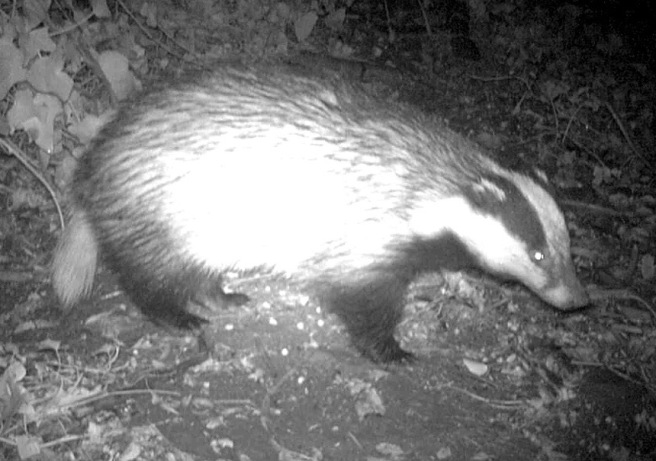 Bonfire Night is coming up and I think this looks like a badger catherine wheel but maybe I am letting my imagination run away with me: 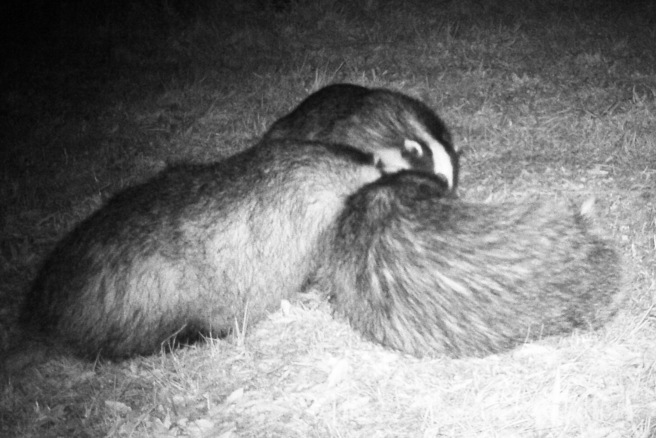 Last night, the new Bushnell camera went into the Mustelid box for the first time with its close focus lens attached (46cm). We put a few peanuts and a bit of chicken in to see what that would bring in to put the new camera through its paces. The answer was that it was just the mouse that arrived as usual, but the Bushnell did quite a good job with it:

We have another camera focussed on a mouse hole dug into the ground in a copse of trees that must be 20 metres or more from this box. We now realise that this is the same mouse since last night we saw many peanuts being taken down the hole:

There has been a visitor to the box that is not a mouse:

This was before the Bushnell went into the box and so the quality is not great, but this surely is a vole. Surprisingly to me, it is much smaller than a mouse which I show below for comparison:

I am going through a little phase at the moment of including interesting shipping that we see from these meadows. Here is the banana boat: 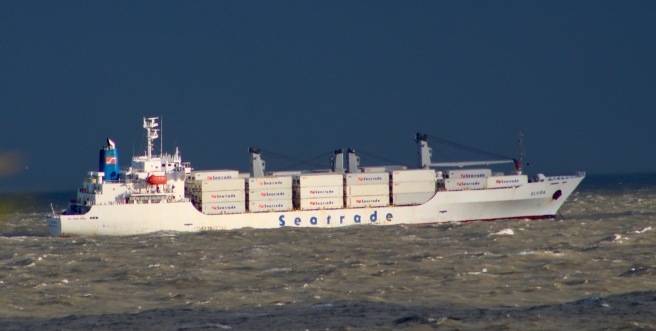 Dover is a bit of a banana specialist and 70% of the country’s banana imports come in through here. We often see this ship – its the Elvira Seatrade, a reefer (refrigerated cargo) and it flies a Liberian flag. I took this photo on 29th October as it was moored up alongside the meadows waiting to go into Dover port, having left Paita in Peru on 14th October.

The last photo for today is of this interesting vessel:

Its a French Navy Mistral Class amphibious assault warship. Military vessels are not mentioned on my Marine Shipping App and so we have no more detail on it than that, although we read that there was a large scale Nato exercise off the coast of Norway shortly after this photo was taken and so presume it was on its way North for that.