Kicking a ball around for the dog in the second meadow yesterday flushed an adult Skylark up into the air. We do see Skylarks coming down into the grass of the meadows to feed – they eat mainly grass seeds but also other seeds and beetles, flies and spiders all of which we’ve got in abundance. Also, the meadows run alongside agricultural fields where they normally nest.

But this time was different though because another bird then came up from the same spot as the adult Skylark. A weak flyer who rose a short distance and quickly came down close to the original area. 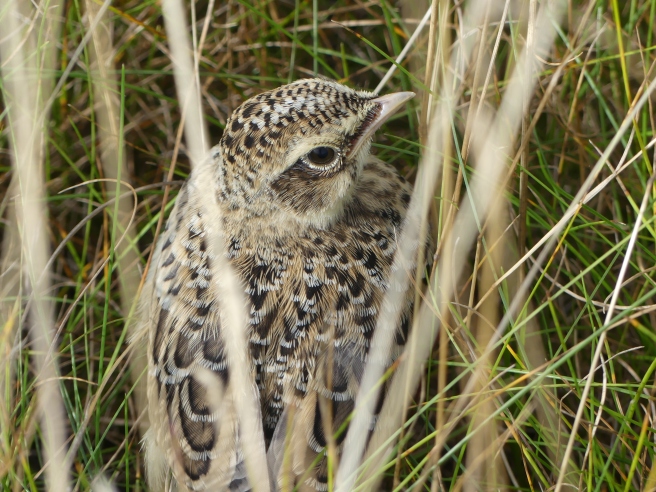 Its a juvenile Skylark. It was too weak a flyer to have got there from another field – so we can be fairly certain that we have Skylarks nesting here.

The population of Skylarks has crashed, its really tragic. 75% between 1972 and 1996 and still declining. The problem is thought to be those jolly old farmers again who now plant their crops in the Autumn rather than the Spring. This means, come the Spring, the crops are too lushly growing to suit these birds. They try to nest in the tractor tracks within the field but the nests get trashed when the tractors come along to spray and predators find them as they trot along the tracks.

Of course, there is the horrible thought that our meadows were cut by this time last year, no doubt destroying all sorts of precious stuff in the process. Oh, its so difficult working out when to get them cut, too many conflicting reasons to do it early or late. However, the most powerful argument of all is to get them cut in September because we cannot find anyone who can cut them any earlier, everyone is too busy getting in the harvest.

Last weekend, we had an agricultural contractor come round to the meadows to see if he could take them on. He thinks he has got time to do them in September, but he doesn’t know what to do with the bales. They will no longer be nutritious enough to feed animals – just dried up grass stalks and seed heads by then. He has gone away to think about it and so fingers crossed for that.

We, in the meantime, will be thinking what we can do next year to make life a little easier for any Skylarks that want to nest here. Maybe temporarily fencing off an area to keep us out and the dog out and putting off foxes and badgers going in there quite so much? Thats a possibility and something to take advice on and mull over during the winter.