After months of watching this pair of badgers contentedly go about their normal routines of life, the last couple of nights have been very different.

On the first night, the male badger was posturing around the entrance making a wickering noise. We are only taking videos on this camera and so these are screen grabs from videos and the quality is not great but here he is making this constant noise:

At one point, the female dashed out of the sett and grabbed him by the tail and pulled him down the hole until he managed to break free and get out again. It was all a bit surprisingly violent.

This all went on for quite a while.

And last night again there was more of the same, the male whickering at the entrance. But then he reached in and tried to pull the female out by her neck until she loudly complained. However, this tactic seems to have been successful because she then emerged from the tunnel and they mated 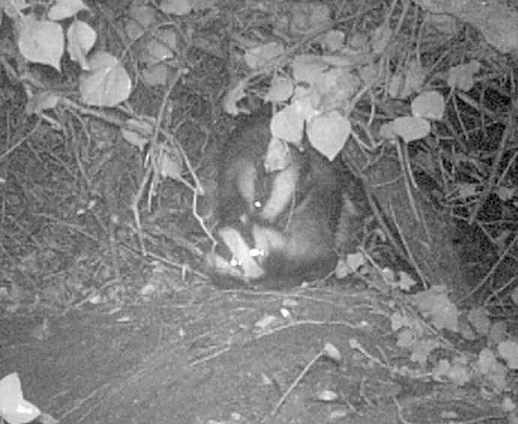 This went on for one and a half hours and maybe more because at that point the camera ran out of batteries.

So this was all a bit of a surprise for us because we have read that baby badgers are born in late January and emerge around April time and so last nights activities were confusing given this time scale. On further reading, however, it seems that female badgers often come into season immediately after a litter of cubs are born and most badger mating takes place in February. There is then delayed implantation and the egg is not actually fertilised until the beginning of December, followed by a 6 or 7 week pregnancy.

There is much written about badger breeding because it is confusing, but the long and the short of it for our purposes is that these last couple of nights could be telling us that cubs have now been born underground. Litter size is generally one to four cubs, normally two or three and we are really looking forward to seeing them when they are old enough to peek their noses out.