Before I go any further, I was so shocked to look up the Wikipedia entry for the film Kes to see that the film was released in 1969 – thats 47 years ago. Sometimes its things like this that make you realise quite how old you are.

But that is just a diversion because what I really want to do is mention the Kestrel who has been hanging out at the meadows recently. 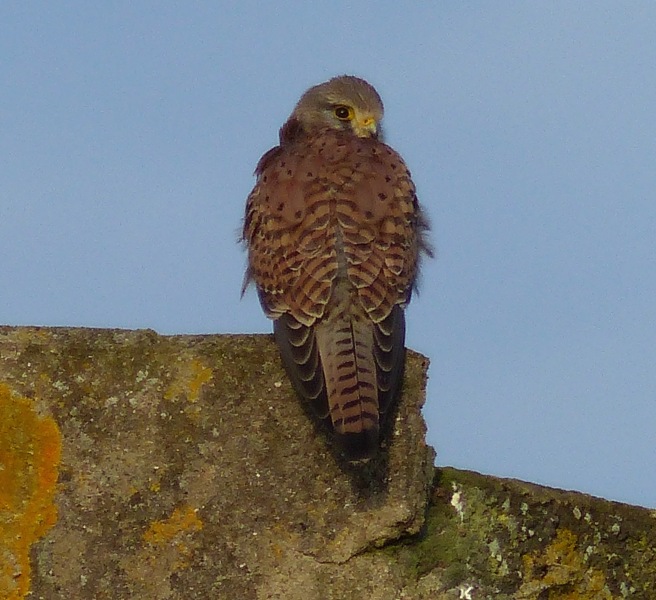 Kestrels are sexually bimorphic – females have brown heads and brown barred tails and so I am fairly confident to report that this is a girl. Males have slate grey heads and tails and no barring.

I have recently disturbed her from the conifer trees in the copses dividing the meadows but today she was perched on the mysterious WW2 ruins just beyond the second meadow.

Kestrels used to be seen everywhere at the time the film Kes was released – they were such a common sight hovering for disturbed rodents at the sides of roads – but they have declined dramatically since then and now are Amber listed.

They feed on rodents as well as frogs and lizards so our meadows are actually perfect for them. If food is plentiful then they don’t bother with the hovering business but just lurk in trees or on the sides of ruined buildings as our girl was today.

I would like to call her attention to the Kestrel nest box that we have up for rent in a conifer tree ready for her should she need it. 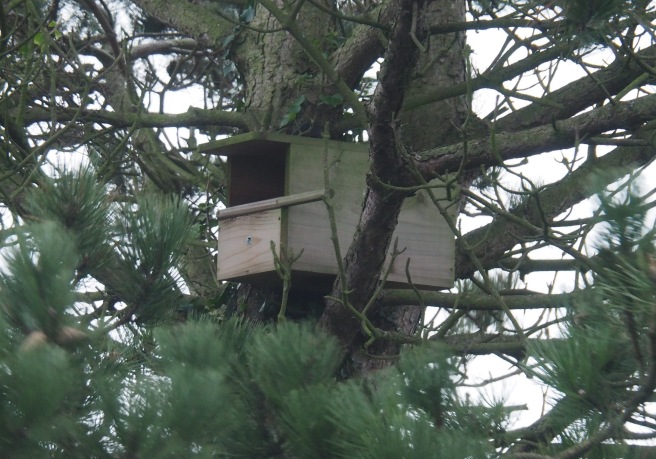 Kestrels do not build their own nests but use old nests of other large birds such as crows or pigeons. Or they lay their eggs in a tree, a crevice in a wall or cliff face or, hopefully, in our box. We put it up this time last year but did not have any tenants last summer. The eggs are laid in April and so we shall be watching out and hoping this year.