What a complete privilege it is to see a wild raptor in such detail:

I think that the eye of this bird, a female Kestrel born this year, is magnificent.

The bird ringer was catching a lot of Goldcrests in his nets this morning and thinks that this Kestrel was trying to predate them when she herself got entangled.

Along with the Goldcrests, he was catching Chiffchaffs and Blackcaps – in total about 35 migrating birds and he is coming back tomorrow:

The bird ringer also rings at Sandwich Bay, a few miles further north, where, last week, a Wryneck was ringed: 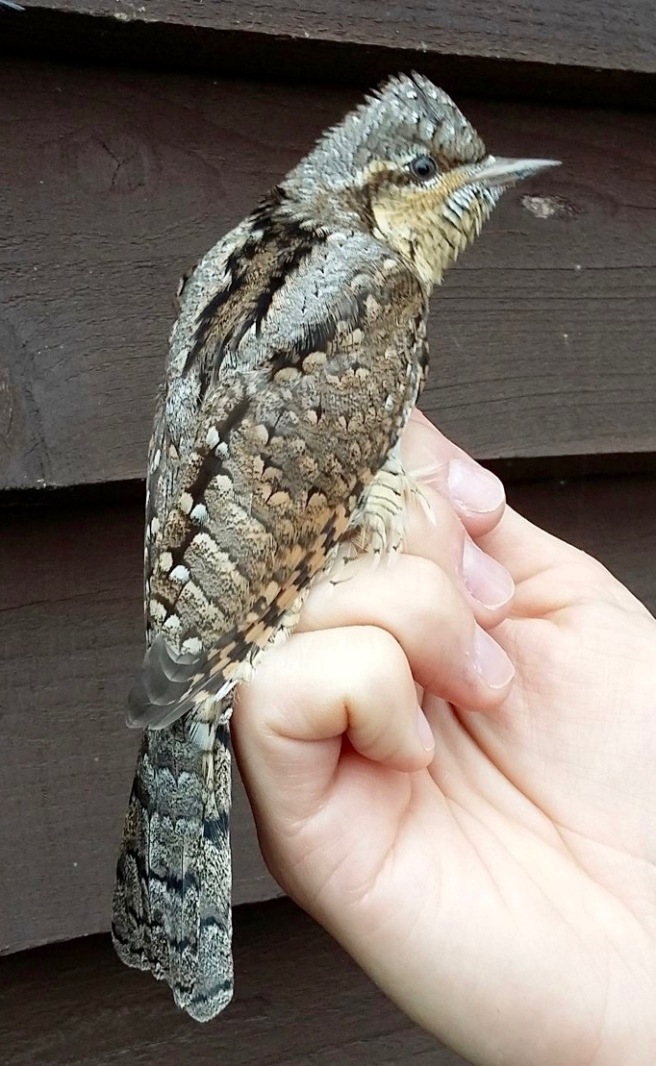 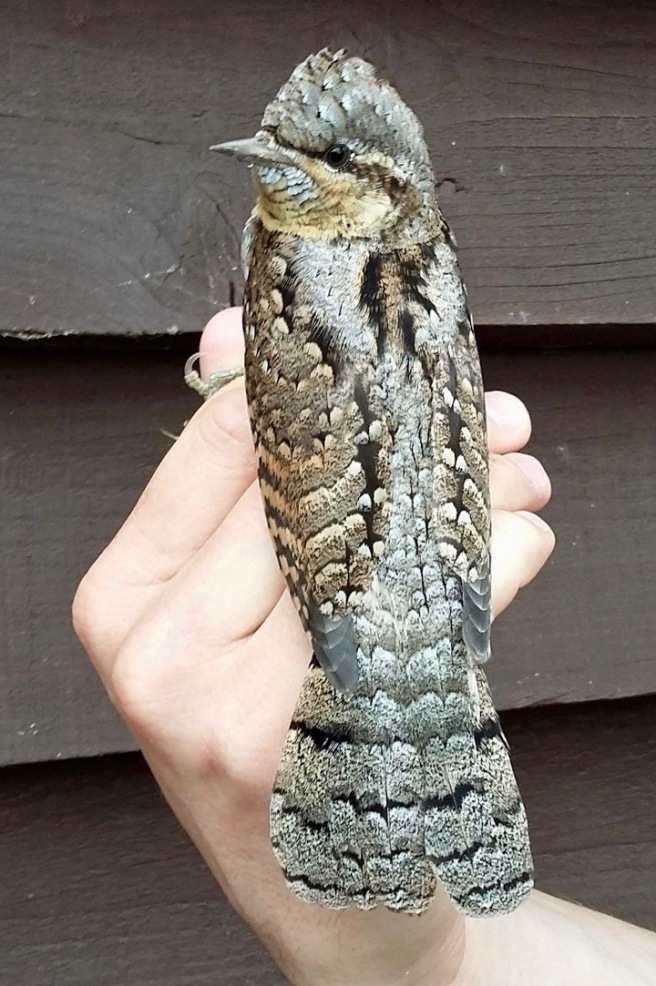 This amazing bird is in the Woodpecker family but doesn’t climb up tree trunks like many other Woodpeckers – this bird eats ants on the ground. It’s a heavily protected, rare bird and the UK only sees a few of them on passage in the autumn.

We have been away for a week and there was a lot of catching up to do on our return.  For instance, the four trail cameras in the wood had close on 7,000 images to go through. There had clearly been a lot of heat and little or no rain and the shallow, painters tray bird bath had quickly completely dried up. Here is the Tawny Owl in the wood when there was still water in the bath: 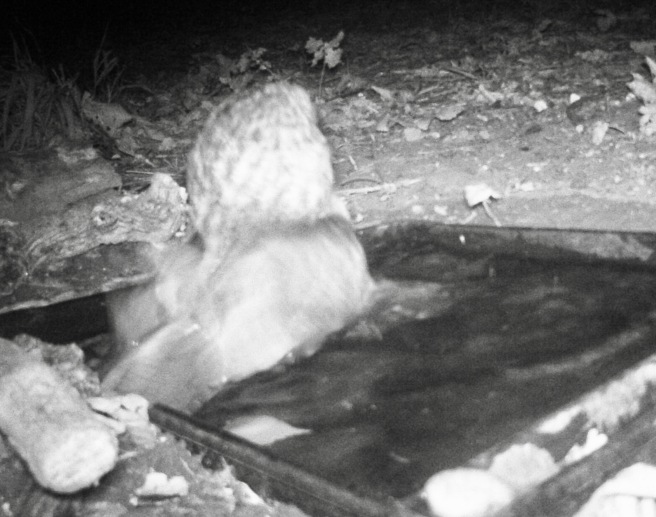 But the next time it visited, there was none: 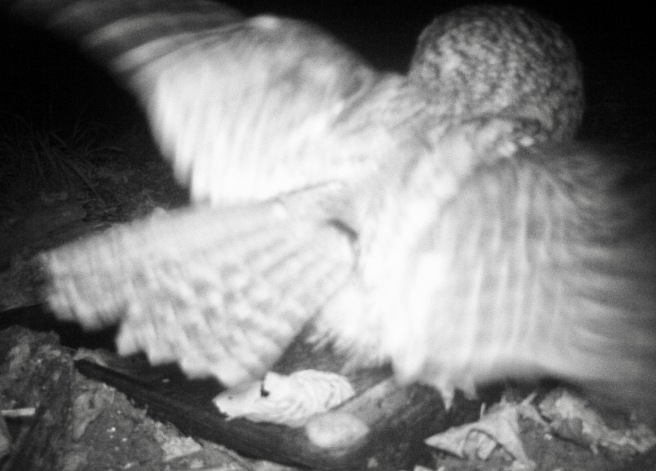 I feel like I have let it down. However, I would still like to be able to go away from time to time and so I am going to see if I can source painters trays that are deeper but still have the gentle slope which is proving so popular as a bathing terrace.

It wasn’t only the Owl, there were many, many birds that visited the bath only to find it empty. Here is the female Woodpecker that was ringed here back in the spring and she then successfully raised a brood of young in a Cherry tree in this wood:

This Squirrel got in just before the water completely disappeared:

We have moved the mustelid box to the wood now and we are hoping to attract a Weasel or Stoat in. No mustelid seen yet though, just various small rodents and this somewhat larger one:

It looks far too large to get in through the tunnel.

The deeper bath in the wood has not had to be topped up since we initially set it up and, indeed, it still has plenty of water in it. There were several visits of the Sparrowhawk: 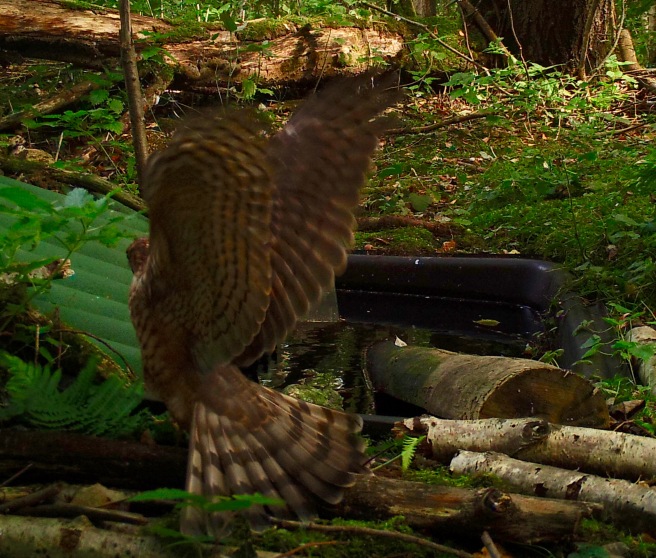 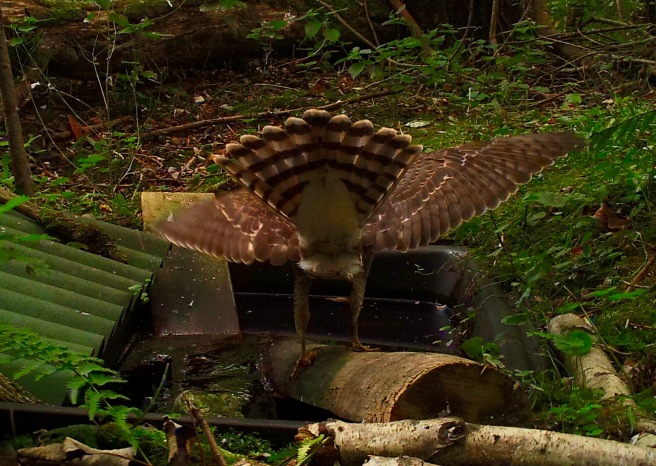 and this juvenile Green Woodpecker:

Its wings and tail seem so short in this image.

Back in the meadows, the painters trays were being topped up from time to time by the bird ringer while we were away and so they fared better. These are all Linnets: 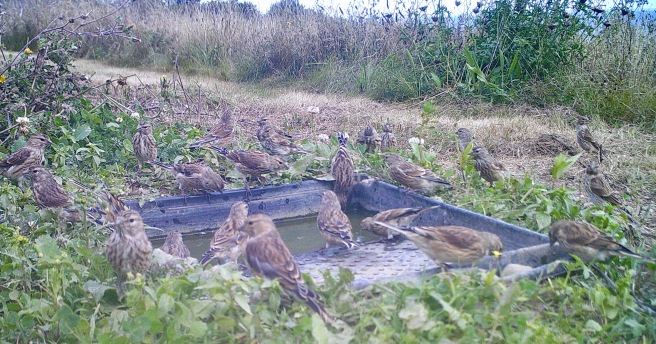 Pretty much every morning in our absence, this bird came a-visiting: 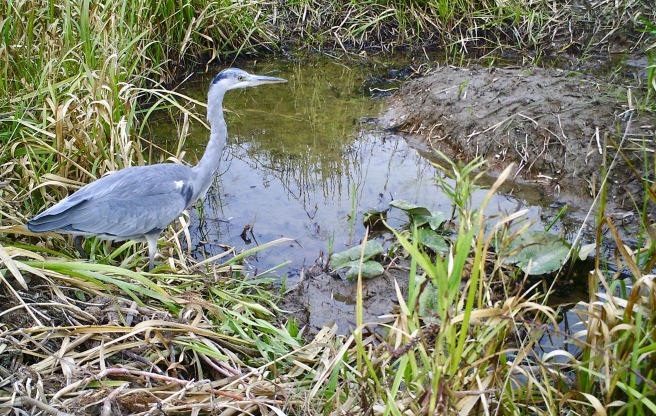 We have spoken to the reptile and amphibian ecologist who was bringing the Slow Worms here over the summer and the plan that we have come up with is to encircle the pond with string about six inches from the ground in January and February. This is when the Frogs gather in large numbers to mate and when this Heron ate hundreds of them here earlier this year. The Heron doesn’t land on the water – it lands on the grass by the side of the pond and then walks in and so the circle of string at its knee height will hopefully deter it without harming it.

The reeds that we pulled out of the pond have all now disappeared underground. Here are the last bits being taken down: 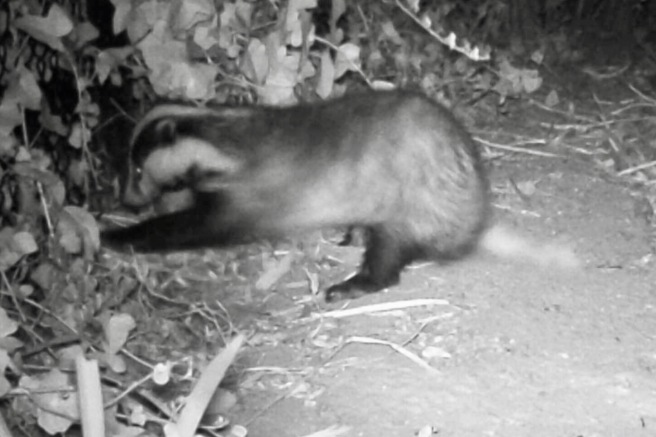 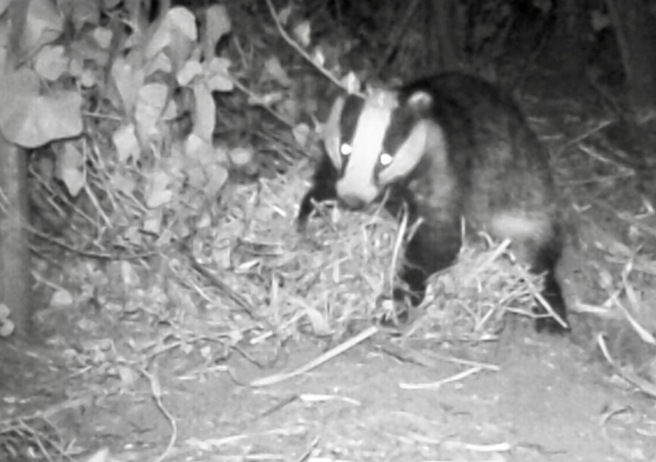 I would like to know about the Dormouse status of our wood. Dormice are terribly scarce these days but Kent is the best place for them in the country.  I do not yet fully understand what Dormice require and so, therefore, what we could be doing  to manage the wood for them.  We do have Hazel coppice, though, and I know they need that. One of the autumn projects we have planned is to find out if they are already here and, if not, what we can do to attract and support them. There are several more exciting autumn projects being considered but I will tell you about these in future posts..