As we relaxed during these hot, late summer days, we would have been completely unaware that there was a mass evacuation going on over our heads, were it not for the bird ringers who have spent two mornings here last week.

Warblers are streaming south out of the country at the moment and most will be gone by the end of August. The bird ringers wanted to capture and ring as many as possible as they pass through the meadows and, indeed, they have processed nearly fifty birds, including Willow Warblers, Garden Warblers, Whitethroats, Lesser Whitethroats and a Reed Warbler.

Warblers have also been turning up on the trail cameras:

The weather has again turned hot and dry and the water baths and ponds in the meadows are being well used: 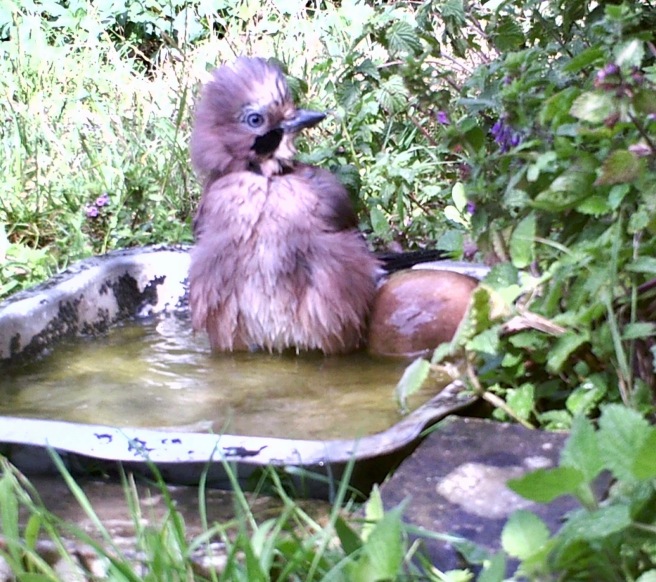 I love the reflections in the water in the next few photos: 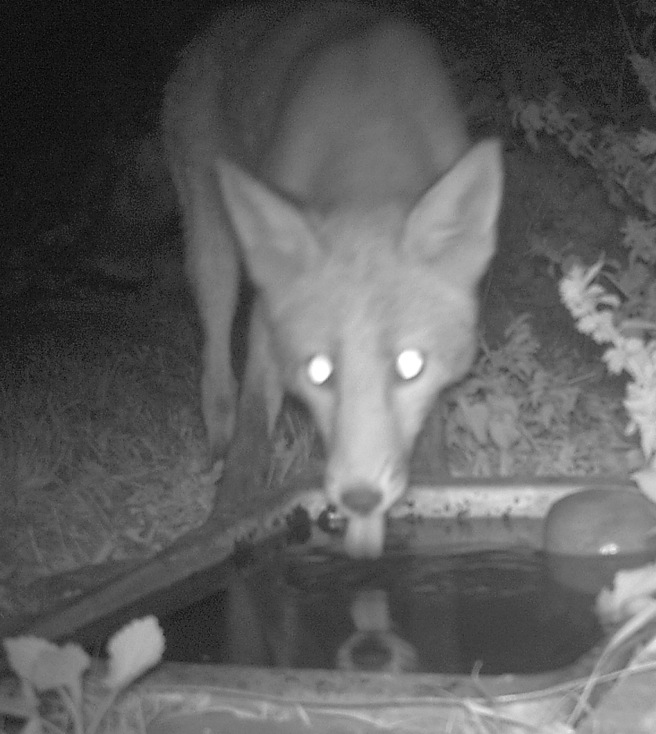 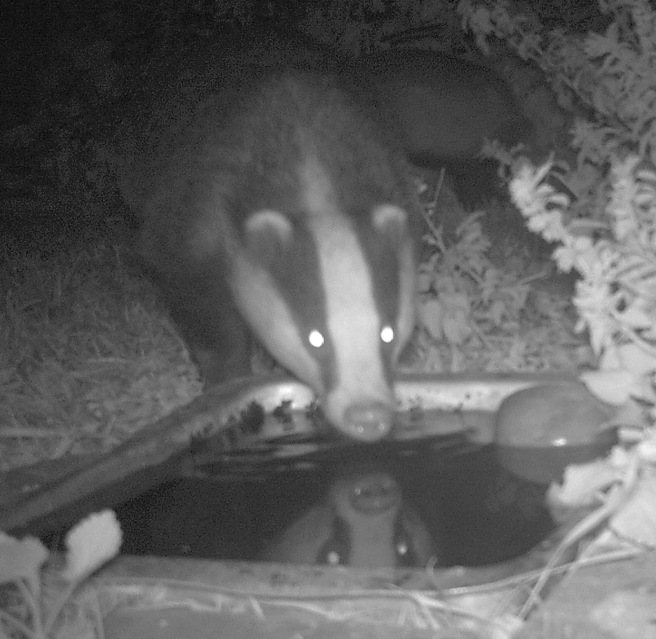 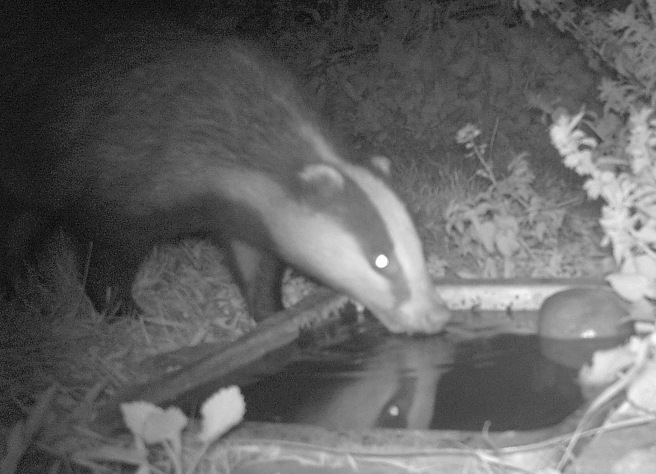 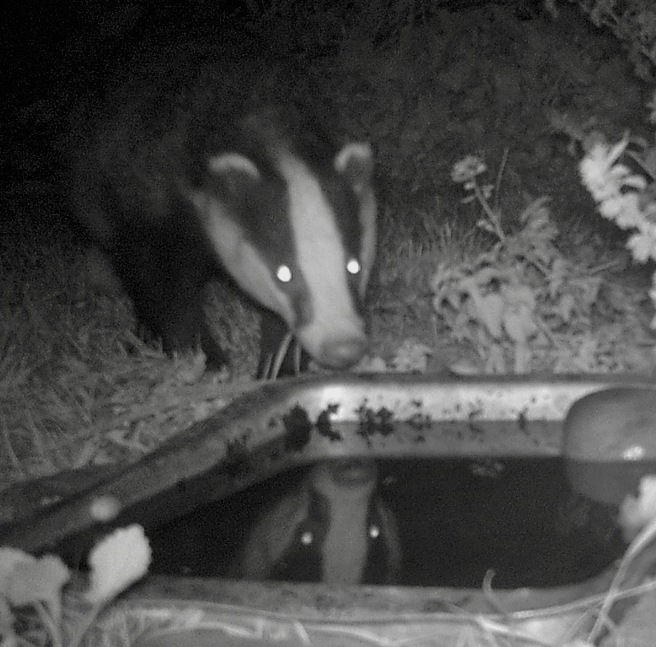 The ponds in the wood are also well visited: 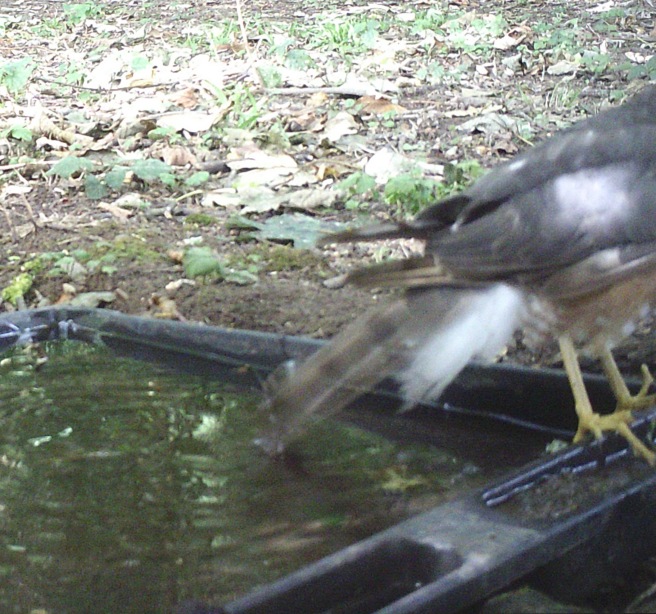 The next shot was of her from the rear and it was a surprise to see how much white she has on her: 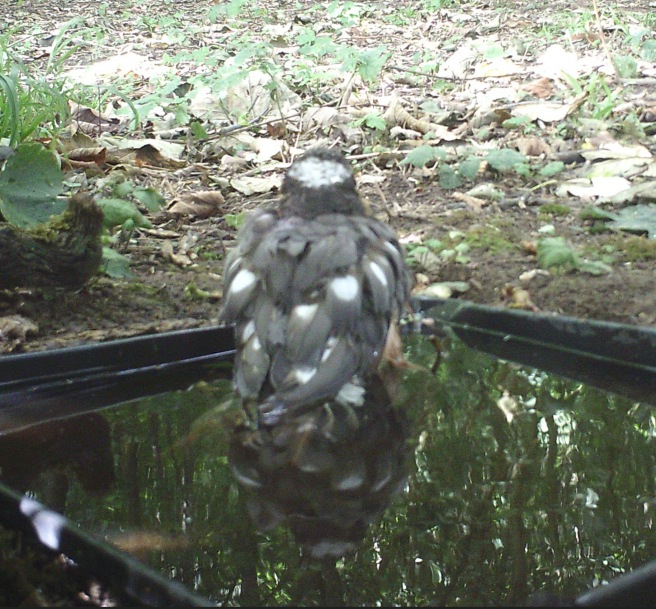 This is a very different look indeed to the female Sparrowhawk from the meadows that I included in my previous post. No white patches at all: 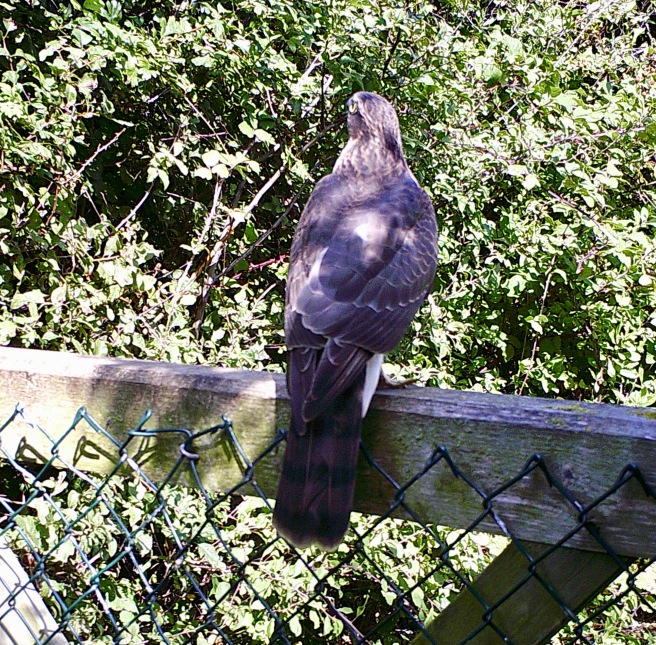 On doing a quick bit of research and it seems that it is reasonably normal for Sparrowhawks to have white patches like that but I have certainly never seen anything like it before.

Before I leave the wood and go back to the meadows, I have to include this photo of a rabbit with the light shining through its ears. So very sweet. 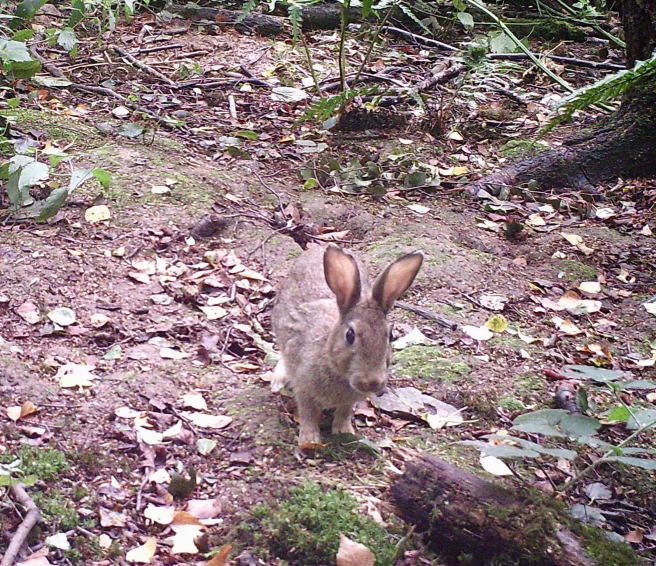 Although Foxes in captivity have a life expectancy of 13-14 years, wild Foxes sadly don’t survive anything like as long as that. Shockingly, a study of Oxford Foxes found that 63% died in their first year and the average life expectancy was only 19 months. Other studies have come up with slightly longer lives than that but the general consensus seems to be that they survive an average of 2-5 years. Unfortunately we have had a fatality here of one of this year’s cubs. The dog alerted us to this little corpse tucked away under a Holm Oak in the right hand copse. 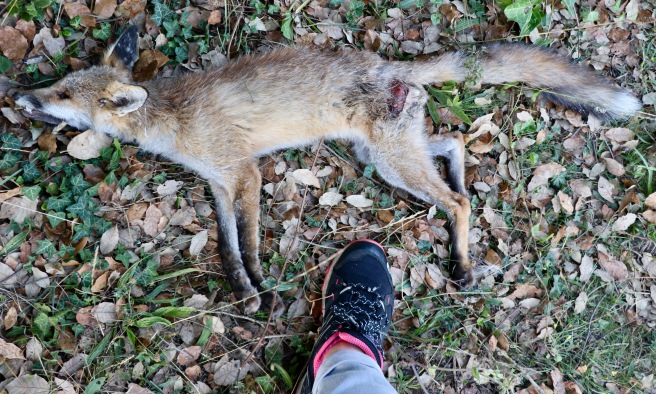 Mostly seeing them on the trail cameras, we are always surprised at how small they are when we see them with our eyes. We suspect that this lovely young Fox was hit by a car on the road below the meadows. Although very upsetting, I take comfort that it managed to get itself back up to the meadows before it died , somewhere familiar and safe where it has surely been happy this summer, playing with its siblings and eagerly awaiting the delivery of peanuts at dusk.

We decided to throw it into the dense vegetation of the cliff to let nature take its course.

Given how close to the sea the meadows are, we have perhaps unexpectedly little interaction with Seagulls. However, for the last few afternoons there have been hundreds of Black-headed  and Mediterranean Gulls circling over the second meadow for several hours. 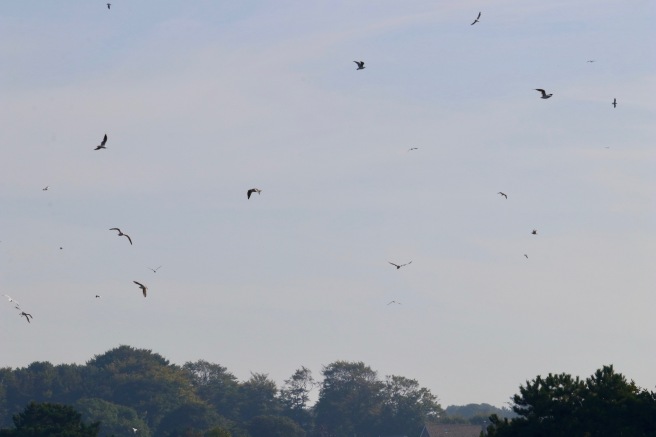 We suspect that they are catching flying ants or other airborne insects in the airspace above the meadow which is actually a compliment to how it is being managed.

The moth trap has been out a couple of nights recently and we have been enjoying going through a healthy-sized, but not overwhelming, catch of moths in the mornings.

Now that it is late August, we are seeing second or maybe even third generations of the same Butterflies that we saw in larger numbers earlier in the year:

Late August is also the time when this lovely and elegant rare Orchid appears in the areas of grass here that are kept short: 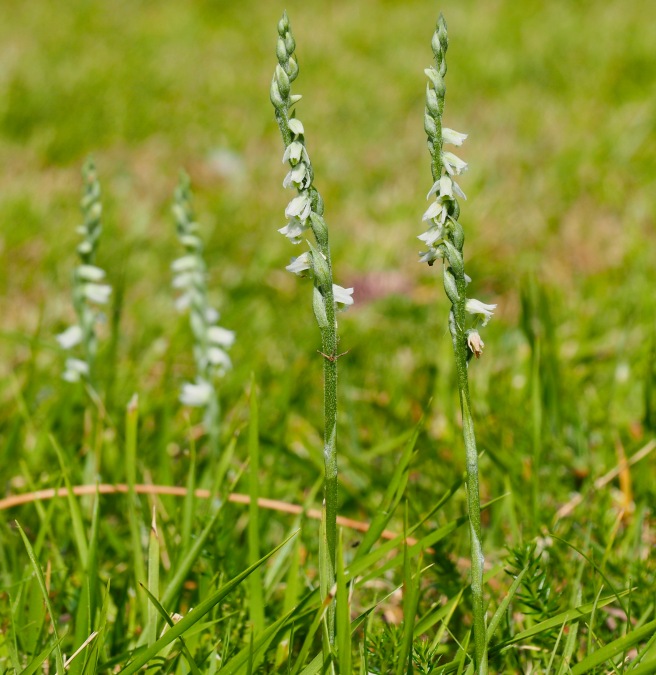 These are Autumn Ladies Tresses (Spiranthes spiralis), whose white blooms grow in a tight spiral round the stem.

In our Flora Brittanica book,  Richard Mabey says ‘the spike has the look of a sea-creature, or an ivory ornament, turned on a lathe’, or another description compares it to a braid of the Virgin’s hair. But whatever it can be compared to, it is certainly a very special plant and we look forward to its appearance at this time every year.

With the oncoming Autumn days, the Badgers will be starting to feed up and put on weight ready for the tougher days of winter ahead. Here are the four female Badgers gathered at the peanuts: 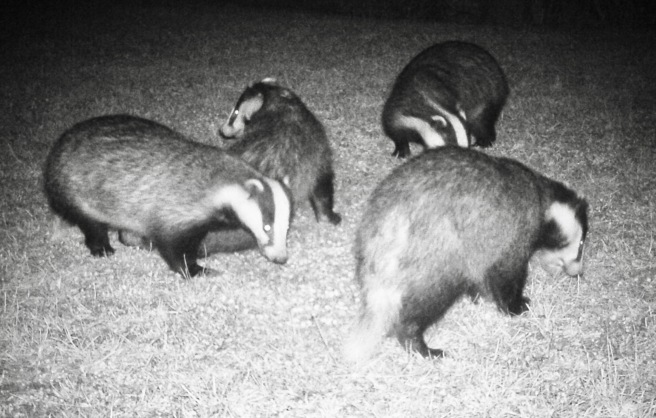 Three of those females engrossed in some mutual grooming: 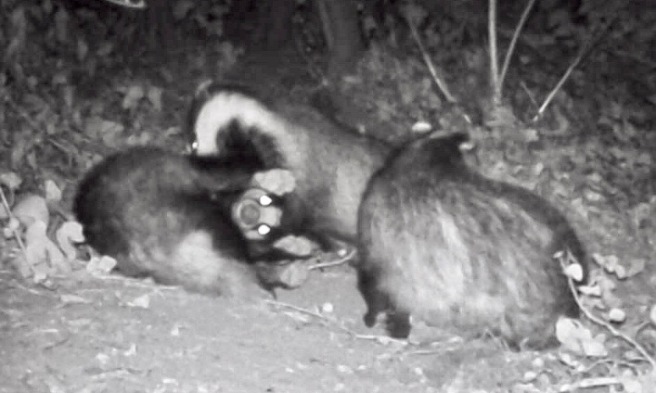 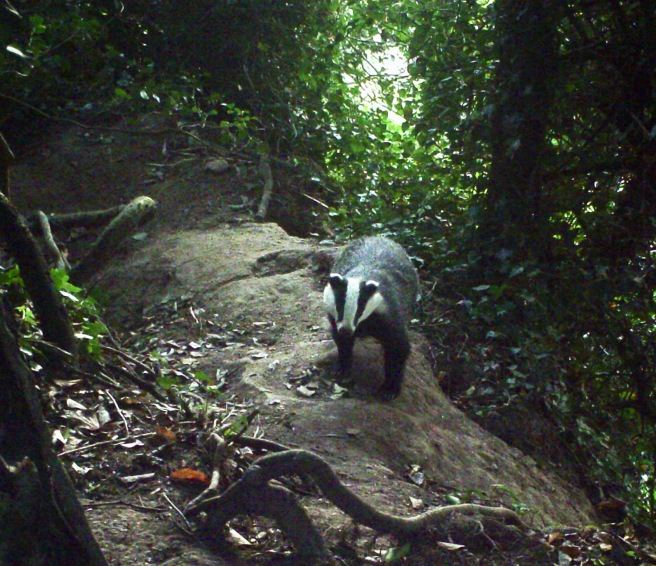 The last two photos today make me giggle. They were taken by the trail camera that is trained on the new sand pit habitat, recently created to see what might use it. We had found some burrows in the sand and wanted to investigate further and the result is really most unfortunate: 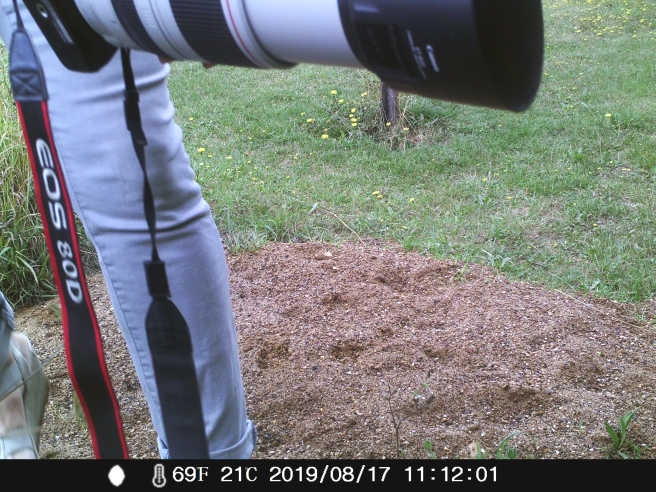 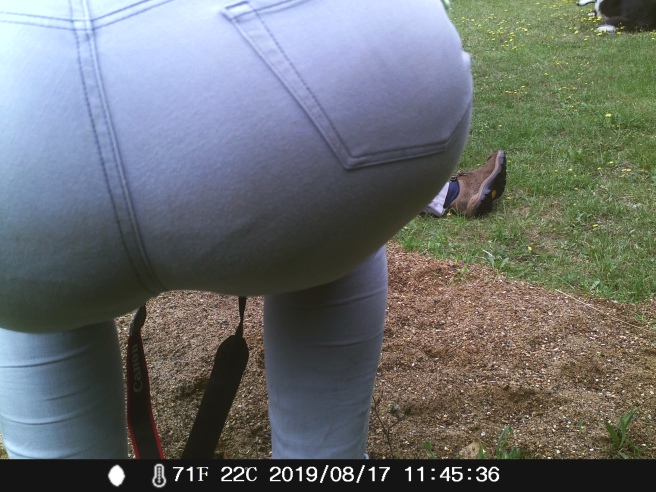