It was a glorious day yesterday – cold but sunny, crisp and still. Here is a Kestrel perched high looking over the meadows in the last hour of daylight.

Today couldn’t be more different, however, with strong winds and rain for most of the day. But this didn’t deter the badgers who spent from 6.25am to 6.58 this morning mating – and apologies to them for my lack of discretion. Mating occurs soon after this year’s cubs have been born: 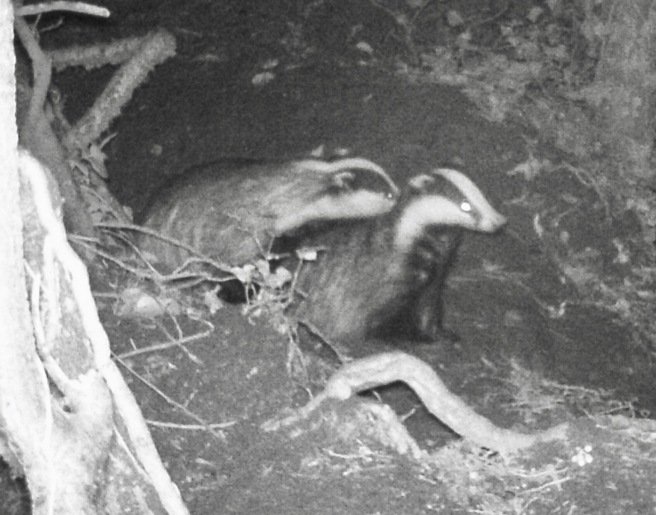 It always seems to involve the male doing a lot of biting of the female’s neck which looks painful but doesn’t appear to bother her. There is delayed impregnation in Badgers – any cubs resulting from this pairing will not be born until January 2020.

But what about this animal below that was outside the Badger sett in the very early hours of this morning?: 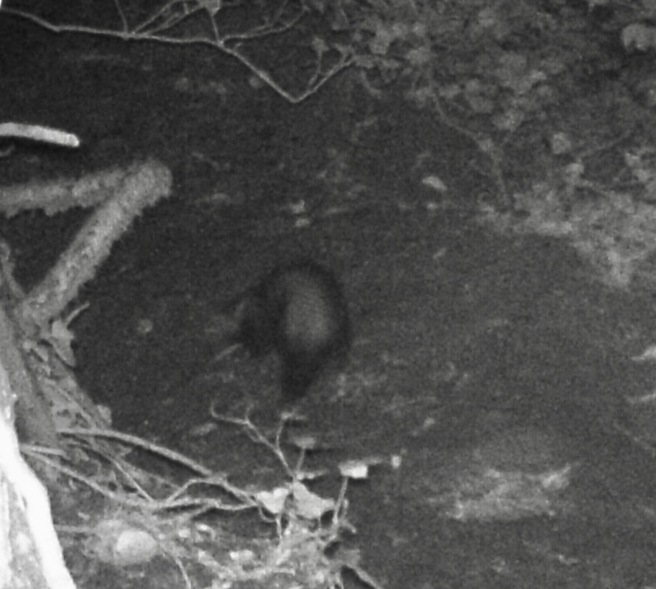 In order to judge size, here it is uncropped: 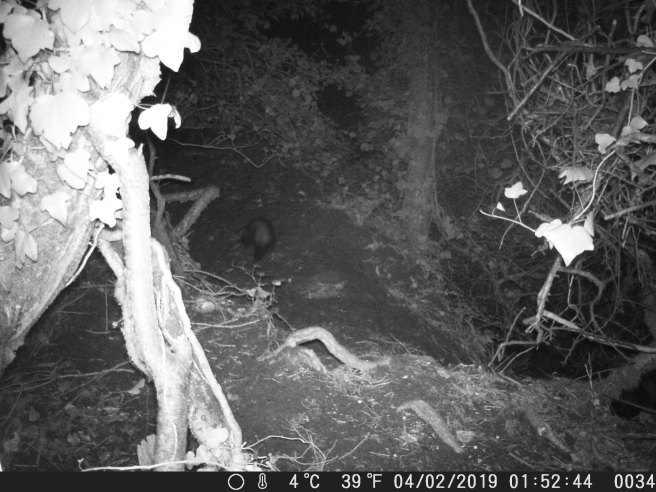 And here is a Badger in more or less the same spot, also uncropped: 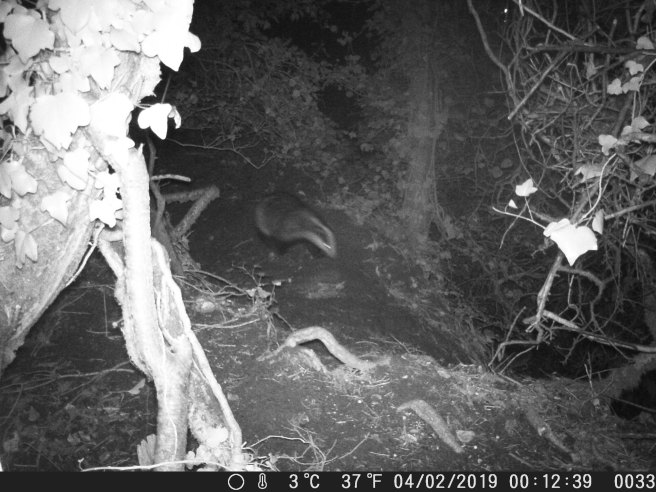 The mystery animal is right in front of a Badger sett. Could it be a baby Badger who has toddled out of the tunnel? Since Badgers don’t store food, the mother badger will have to leave the babies unattended while she goes out to find food for herself. I don’t really know what it is but that is probably my best guess. Any better ideas, please let know.

Word about the occasional placing of meal worms in the Mustelid box has got around the Wood Mouse community. Here are four of them in there:

And I am still trying to get a good photo of the Pygmy Shrew. I think this is the best one yet: 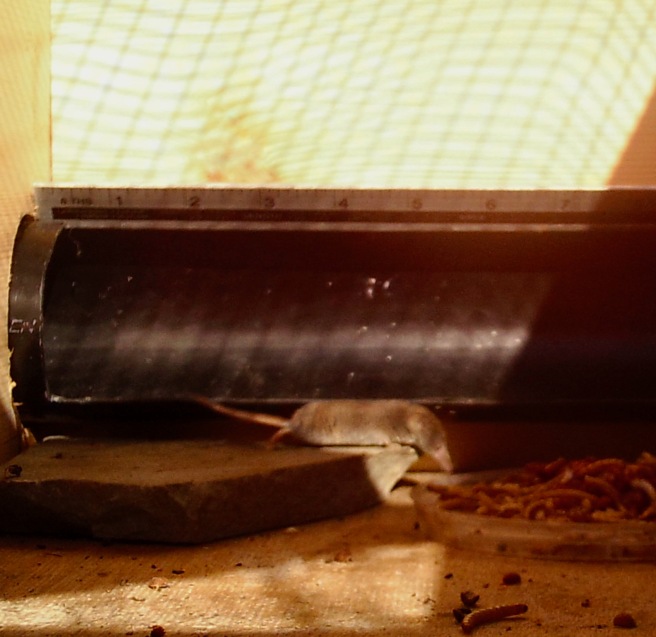 We leave the meadows today with this comedy photo of the dog:

In the woods, the Kestrel box has gone up into position: 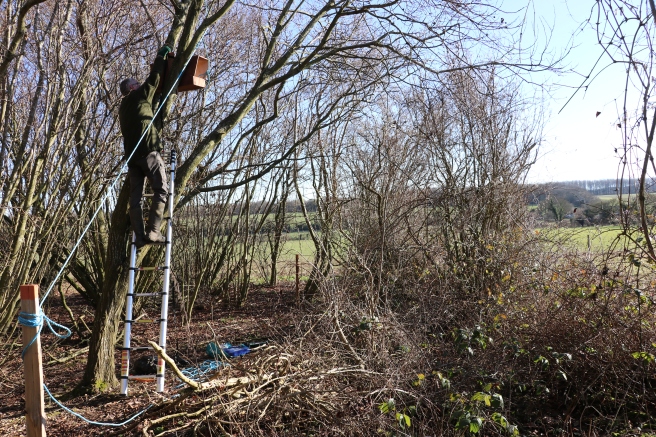 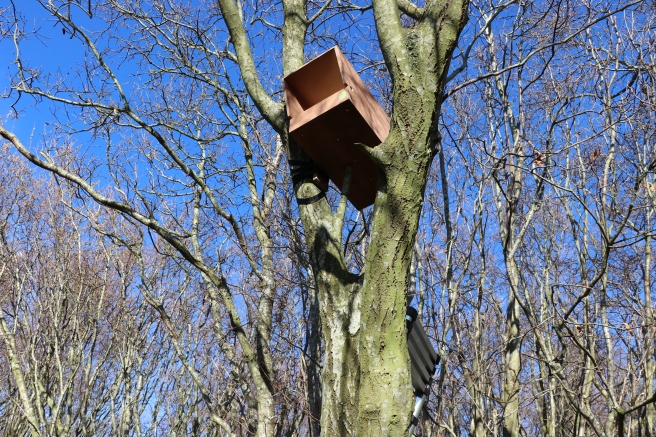 We are pleased with where it is, with a clear view out over farmland at the moment although we may need to do some pruning once the leaves come out.

The wood’s trail cameras have come up with some good photos over the last few days. These two birds below are Lesser Redpolls – Birch and Alder specialists who breed in the North and West of the UK but do come to the South and the East to overwinter. We certainly have a lot of Silver Birch for them here. They have red caps which you would be able to see if they were looking at us:

It was good to see several different bird species coming to drink at the new pond:

As we walk round the wood, we often put up Woodcock – sometimes as many as four on one visit – so it was great that one got caught on camera:

And cropped in a bit:

What a fantastic bird.

Finally for today, we have been seeing a lot of male Pheasants on the trail cameras, but here for the first time is a female as well: 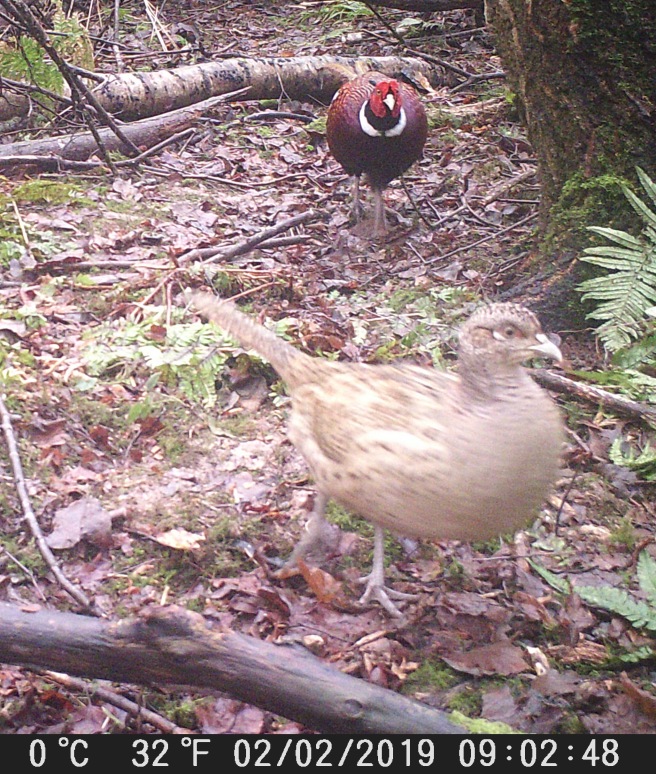 Isn’t this the sort of photo you could use for a caption competition?