Last year the Heron, relentlessly successful hunter that it is, cleared the pond of Frogs and Newts. This year, we retaliated by deploying Mackenzie, our scarecrow, who so terrified the Heron that it completely kept away. Actually, Mackenzie scared us a little bit too:

So, we now have a healthy population of Smooth Newts in both ponds and I have become a little bit obsessed. Like Gussie Fink-Nottle, I may soon be keeping them in my bath. As I stood and watched, I could see females with their swollen abdomens full of eggs being escorted around, usually each by two males. A newly purchased polarising filter has helped my camera penetrate into the depths of the water and the resulting photos are now a little better: 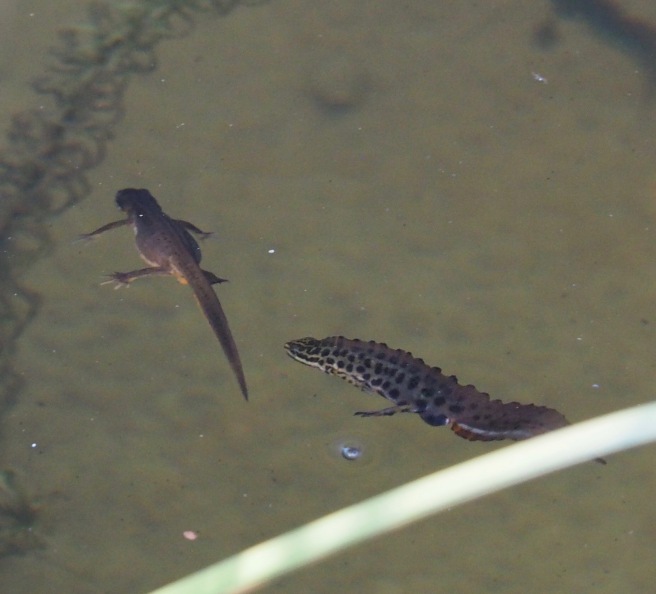 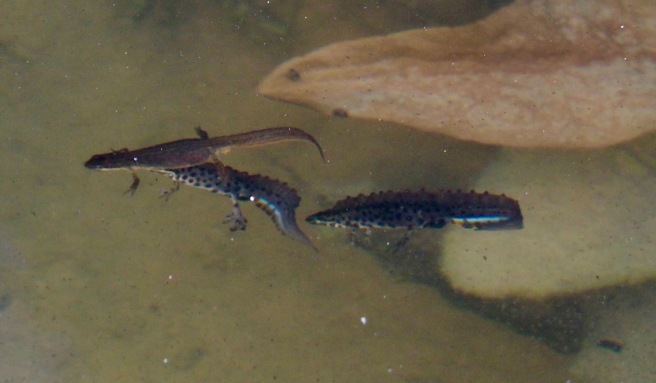 We fished a couple of the males out and put them into a glass vase so that we could get a better look at them:

And there is no disputing that they are males:

The male Smooth Newt in his breeding finery like this is the most wonderful thing. They went back into the pond so that they can continue following their females around. Apparently males perform a ritual courtship dance to entice the females which is a sight to behold and I definitely do want to behold it. I will be standing looking into the pond a lot over the coming few days.

Reluctantly, I am now moving on from Newts, although you, of course, may well have been feeling that you’d already had enough.

This one-eyed fox is around a lot and always comes to the peanuts in the evening:

Although she is very distinctive at night, she is much less so by day. Below is a screenshot of her from a video and at first sight it doesn’t appear that anything is wrong with her:

Zoom in a bit more and it is, however, apparent that her left eye is pale blue and looks odd:

She is currently nursing newly-born cubs, born in a den somewhere on the cliff, and we are very happy to be helping her and her family with a daily small helping of nutritious peanuts.

This is her as well:

We have also been putting some dried long grass out for the Badgers to take back to their sett as bedding. This camera is looking along the animal path at the top of the cliff:

The same camera took several videos of this bird below. It is a Redwing but I sent it to the bird ringer to query the fact that the eye stripe and the moustache stripe have black edging which looked very peculiar to me:

He tells me that it is an Icelandic race Redwing on its way back to its breeding grounds there.

The Badgers have several setts dug into the cliff with tunnels running in under the meadows. About six months ago a vertical hole appeared in the meadow that I would have to describe as a ventilation shaft because it looked too narrow for a Badger to come up through. We stuck a pole near it to remind ourselves that it was there so we didn’t break an ankle. But, overnight last night, this has been dug out into a proper tunnel entrance:

We have put a camera on it now to see what’s going on.

I have been doing some top-class isolating, spending time tucked away in the mobile hide. It is positioned in a spot sheltered from the strong north-easterlies that have been raging in off the sea all weekend. But it also has a view up the second meadow because I am trying to see if I can locate the Skylark nests:

Unfortunately I have never been able to sit still for long and I make a really useless wildlife photographer. But once the Skylarks are feeding young, they should be coming and going more often and I have a bigger chance to see them before my patience runs out. However, so as not to alert predators to the nest position, Skylarks land away from the nest and then do a crouching run along the ground and so it will by no means be easy even then.

The Blackthorn is in flower along the northern boundary of the meadows, complementing the chalk bank beautifully: 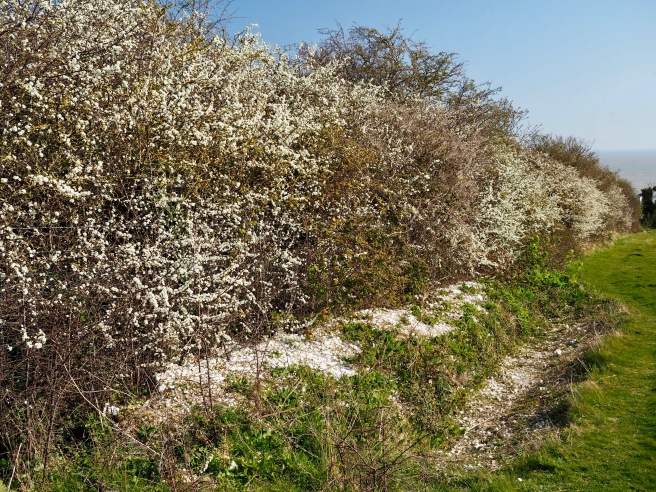 We dug down to the chalk in order to build another Stag Beetle log stack. The logs are buried to provide an underground rotting wood habitat for Beetle larvae:

Some food delivery companies use a pad of sheeps’ wool as insulation for the chilled items and we have put some of this wool out for the birds to see if they want to use it for nesting.  We saw a Crow in the meadow with its beak full:

Alerted to the fact that they were using the wool, I put a camera on it:

So, a Crow nest is going to be softly wool-lined somewhere nearby. But I’m not sure we really need more Crows.

Here are some other interesting bird goings-on over the last few days:

For the first time for at least a year, a Tawny Owl has landed on this perch in the meadows. How lovely! The natural habitat for a Tawny is woodland and there is not much of that around here which makes it doubly special when we do see them. 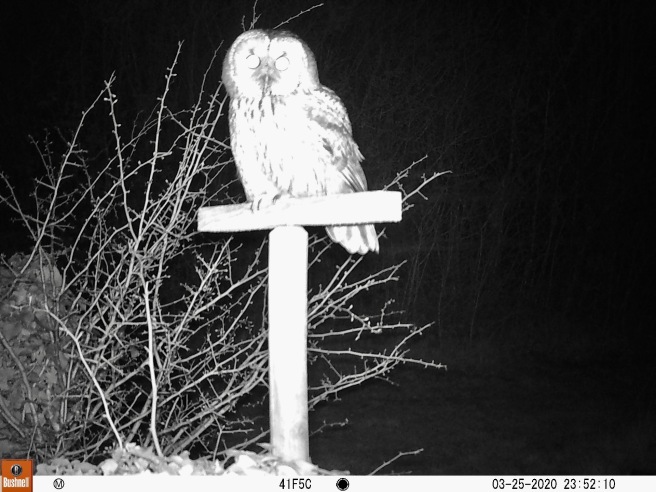 I find myself with more nature time at my disposal than normal. One of the ways I want to spend this is by getting to know more of the insects that call the meadows their home. Such as this parasitic wasp: 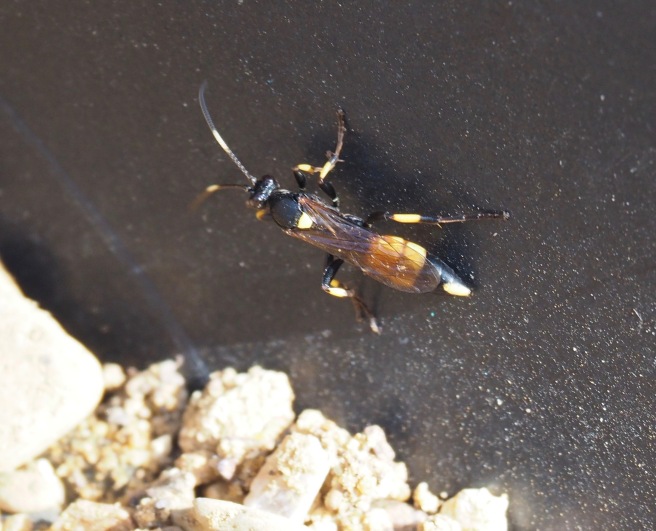 This is a female Ichneumon stramentor. Parasitic Wasps are fascinating things. This one lays its eggs on the caterpillars of the Large Yellow Underwing or Setaceous Hebrew Character moths and its developing larvae then live off the caterpillar. A bit gruesome but interesting nonetheless.

There are a lot of Mining Bees flying at the moment. I have taken photos of many different types but am having trouble identifying them. To do it properly you really need to kill them and put them under the microscope but, in that case, I would much rather let them get on with their lives with me not knowing what species they are. Tawny Mining Bees are easy to identify though: 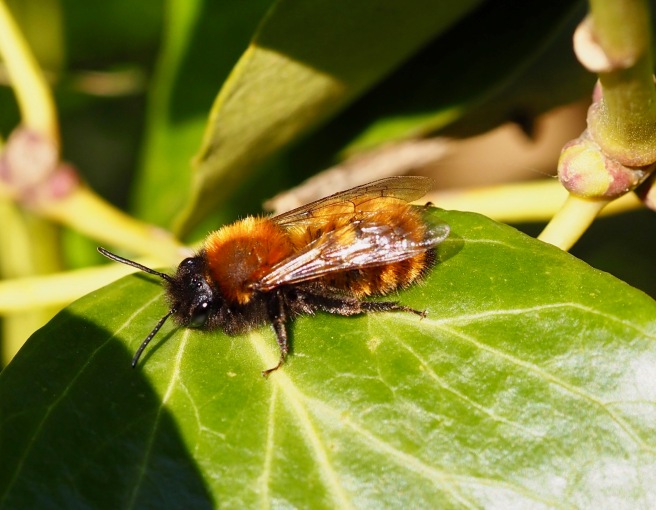 I also managed to identify this Hoverfly as a female Eupeodes corollae: 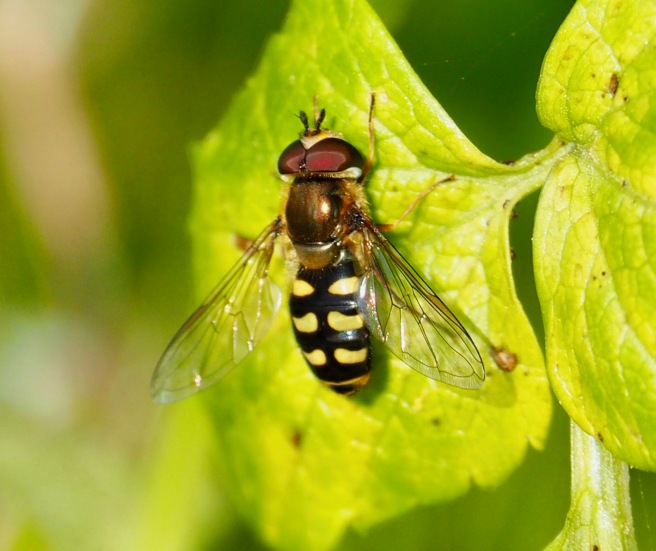 This is a common European species of Hoverfly whose larvae feed on Aphids. It was tried experimentally to use it in greenhouses and fruit plantations as a method of Aphid control but they were found to be also partial to the fruit, eating more fruit than killing Aphids, so that didn’t work.

So, no news from the wood this time because we haven’t been there. By now the feeders will surely be empty and I worry for all the birds that had become accustomed to coming there. But there is really no benefit to me fretting – visiting the wood is currently illegal and that is that.  It is nearly April and nature will be coming alive in the wood and surrounding farmland and there should now be food available for them from these natural sources and I have to content myself with that for now.