We were away from Kent during last weekend’s Storm Ciara. The meadows are frequently very windy, but in the five years under our management there have not been winds anywhere close to being as strong as the 75mph that were forecast for this storm: 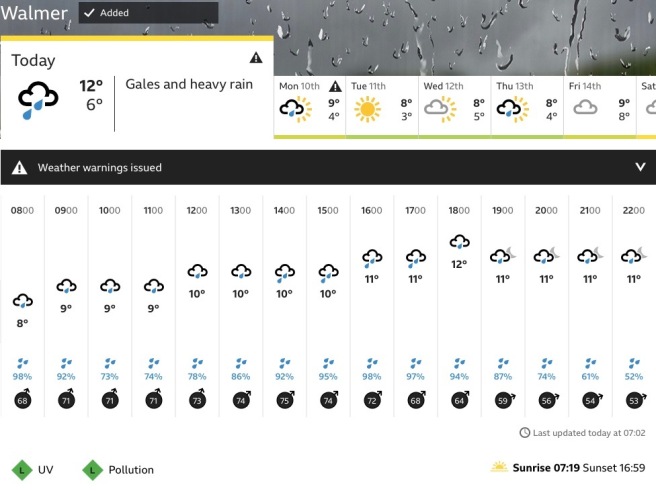 We worried for the heavily ivy-clad trees along the cliff line and also about the domino effect of trees falling in the wood.

But, in the event, the only casualty was the swing seat in the meadows. Actually, we have long wanted to move this seat but it was too heavy for us to lift – now we are forced to get it sorted: 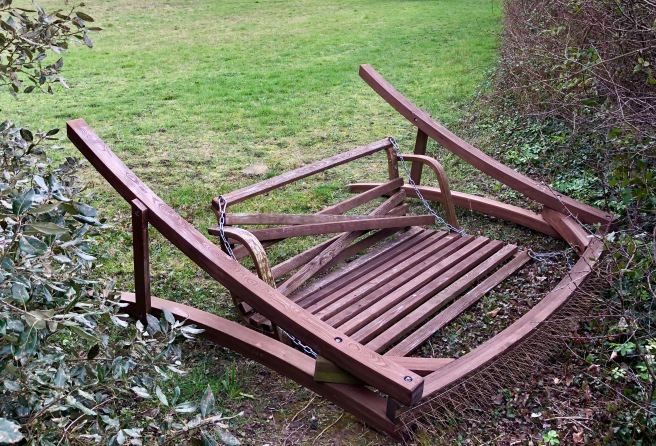 The Badger cubs have definitely been born underground. Badger mating happens as soon as the cubs arrive, and here we are: 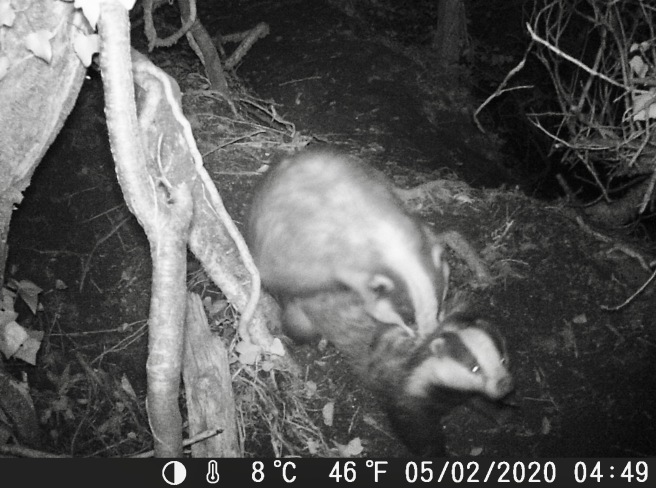 This is a lovely serene Badger shot: 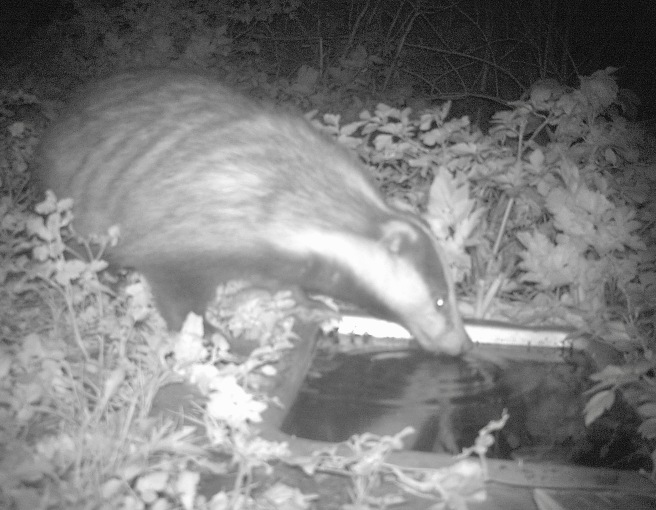 And some gentle, communal family time outside the sett: 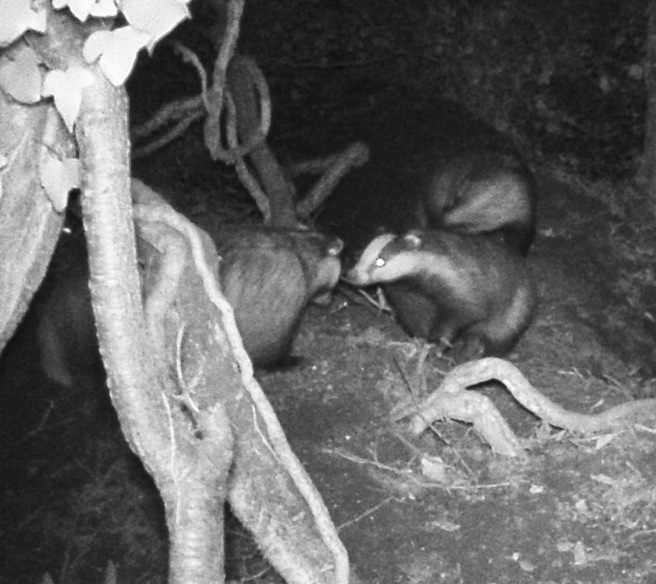 A small group of Yellowhammer have arrived at the strip: 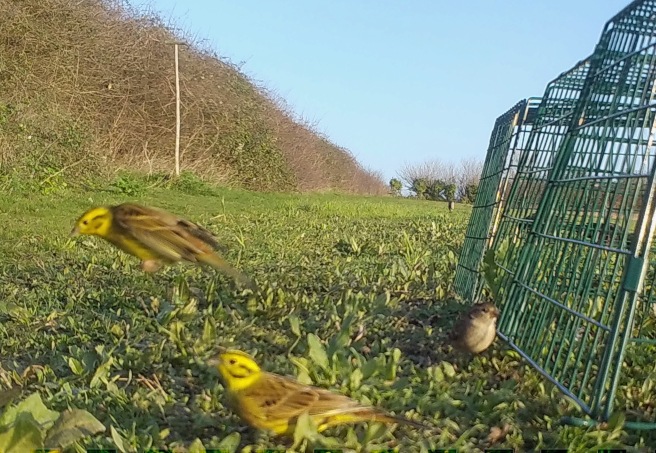 They are happy to go into the cages. There are three of them in the photo below:

I hope they are going to stay and breed here again this year.

Ivy is an overlooked plant but it plays an important part in the ecosystem in the meadows. It flowers in September and so provides a large source of nectar at a time of the year when most other flowers are withering. Hundreds of thousands of Ivy Bees hatch out here in September specifically to take advantage of this bonanza but many other species rely on it as well.

The Ivy berries then ripen during the winter, feeding birds through the hunger gap when other food is in short supply. The berries don’t all ripen at once and there are just so many of them that sustenance is provided over many of the cold winter weeks. 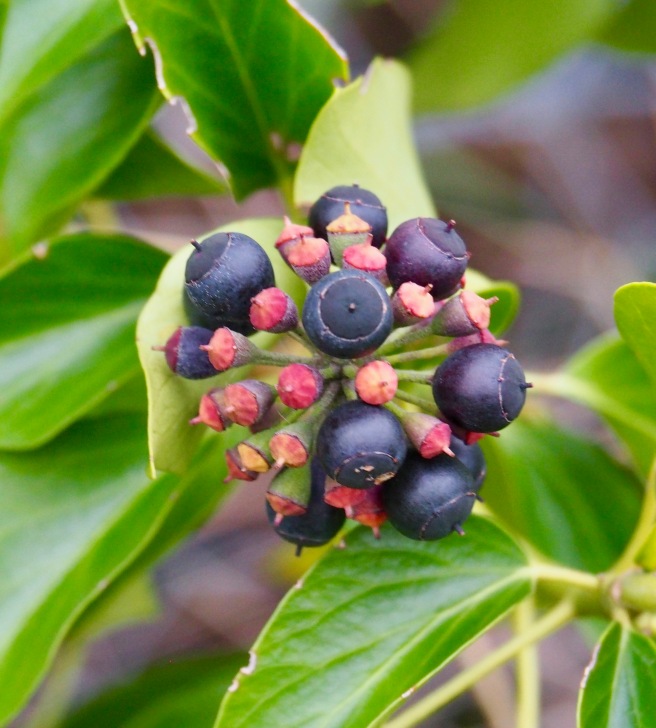 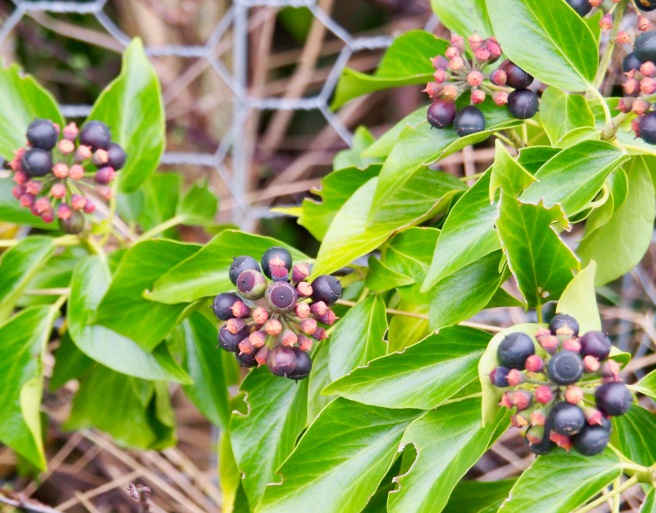 A large Ivy plant by the hide pond is absolutely loaded with ripe fruit at the moment and I counted fourteen Woodpigeon feasting on it the other day: 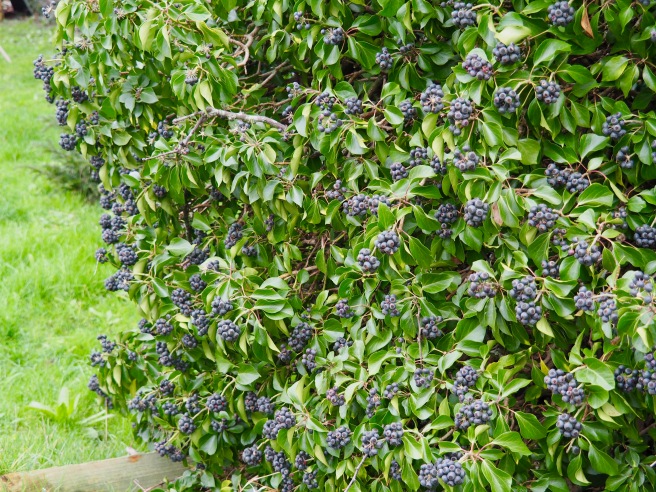 I put a trail camera to work to see if it could catch them at it. It turns out that it could: 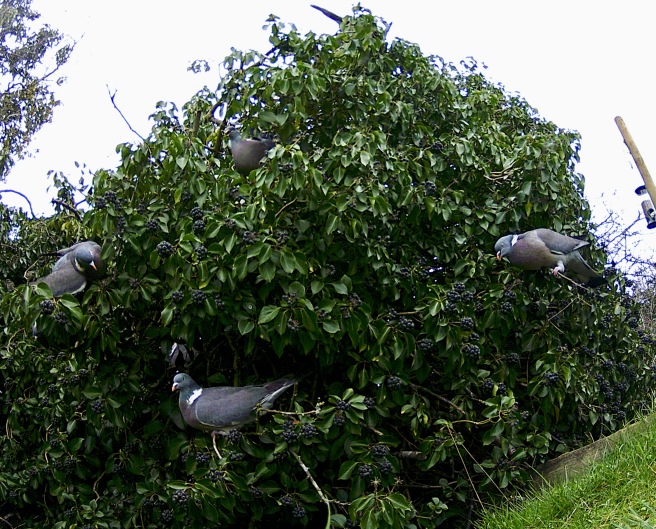 Another really amazing thing about Ivy is that it has two phases of growth. Its juvenile form has a three-lobed leaf with long stems that shoot quickly upwards when they find a vertical surface, holding on with a mass of roots that sprout from their stems. This juvenile stage doesn’t flower or form fruits.

Once the plant is about ten years old and has become established, the growth changes to the mature phase which looks very different. The leaves change shape, becoming unlobed, the growth becomes shrubby and the plant now flowers and fruits.

Although the juvenile Ivy does provide shelter for animals, it is only really when the plant switches to its mature phase that its wildlife credentials properly get going.

Mackenzie, our scarecrow, has done a fantastic job. He loyally stood out on his own by the pond throughout Storm Ciara and managed to remain upright. Most pleasing of all is that the Heron has not visited the pond once since he went on guard.

The Frogs have got busy. These photos were taken at night down at the pond before we left, using a torch and the camera flash: 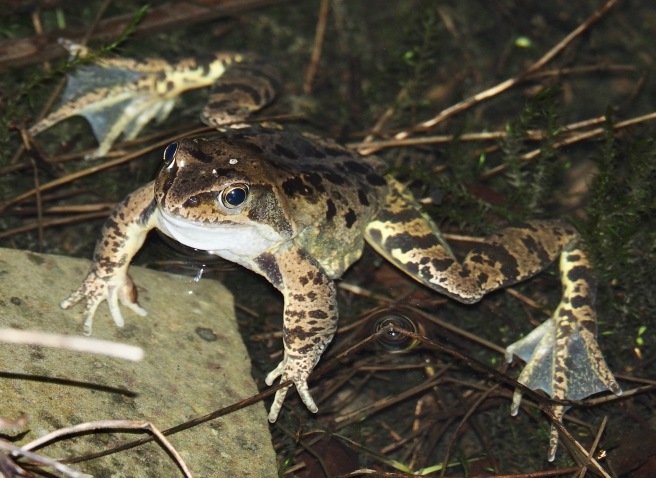 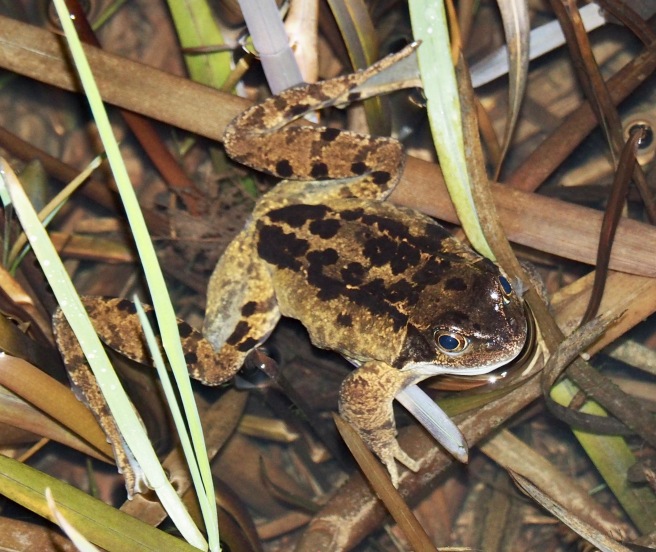 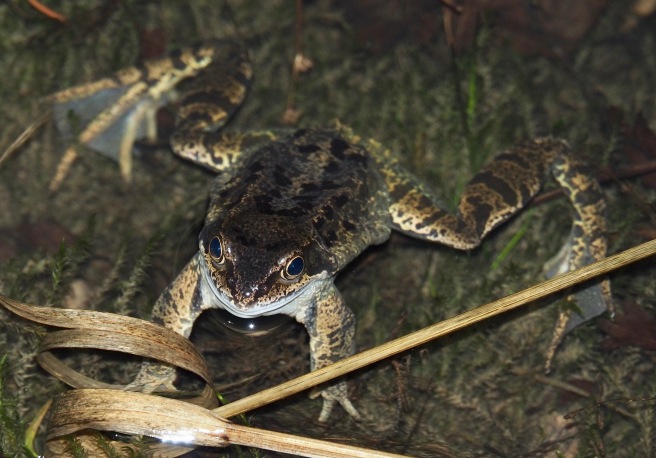 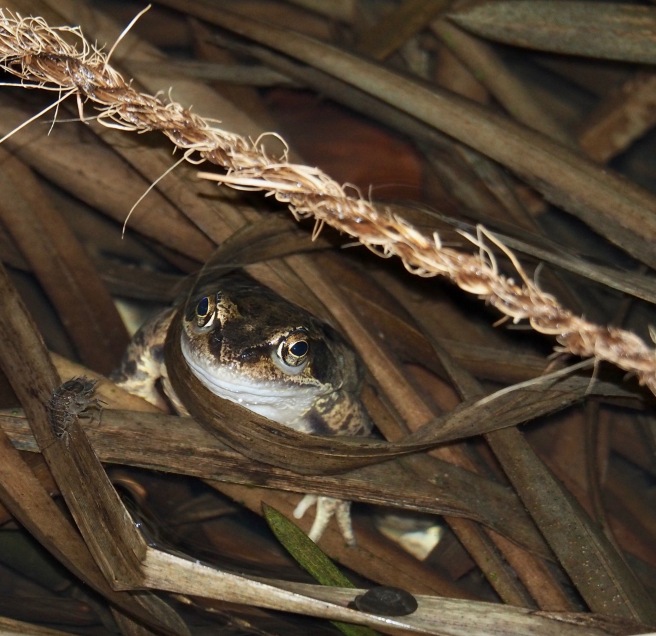 The Frogs had just started mating then. The female’s tummy below is very full of spawn: 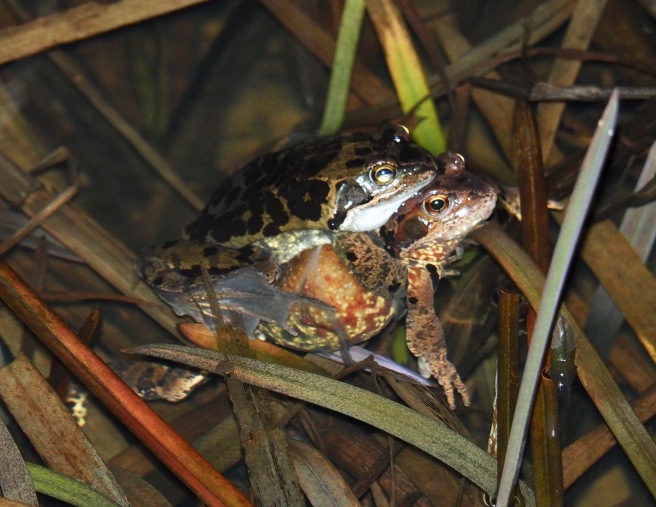 We have returned to find Mackenzie standing proudly over a pond full of frog spawn: 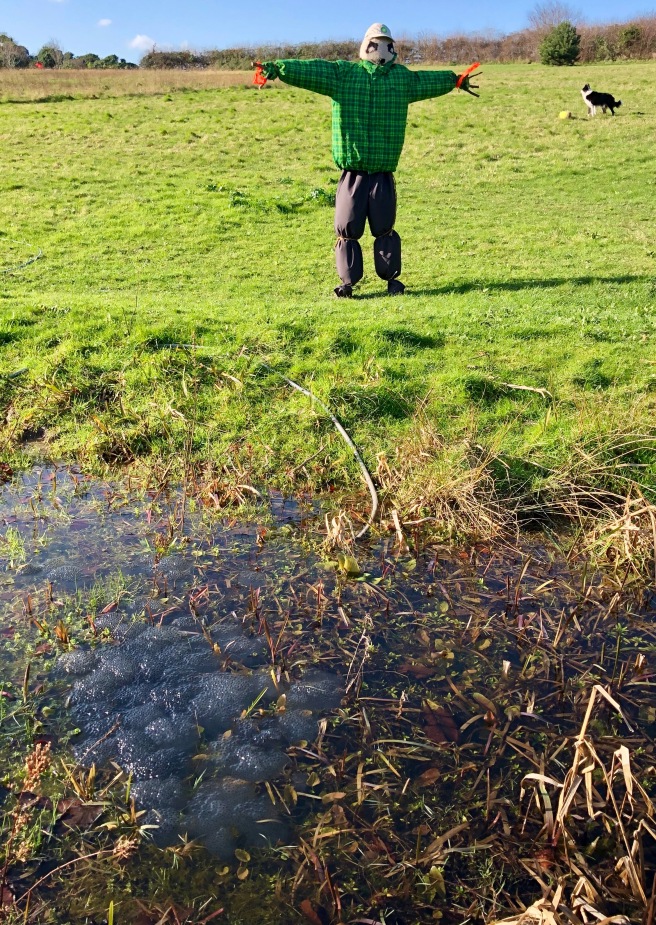 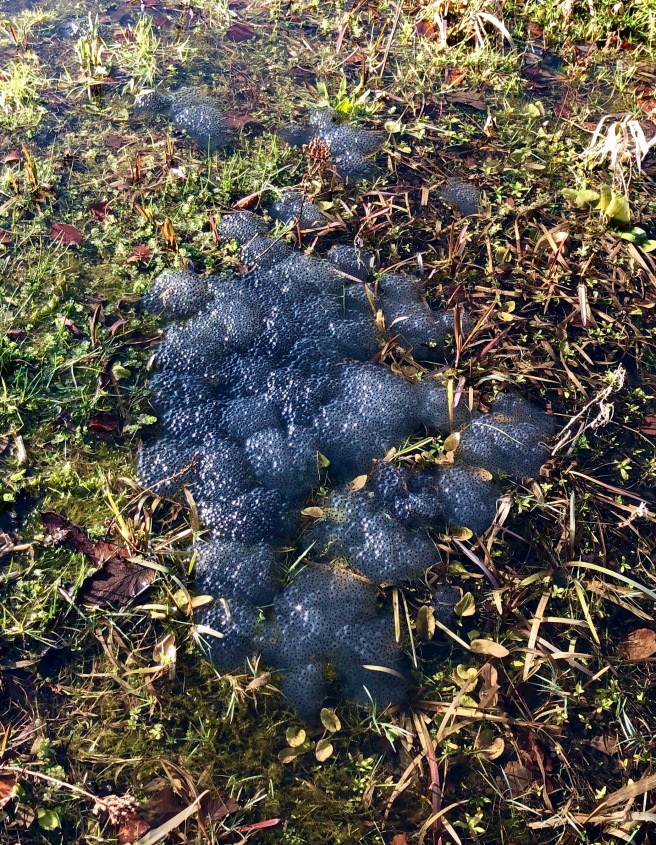 The Owl has been in the same place in the wood looking for worms while we have been away: 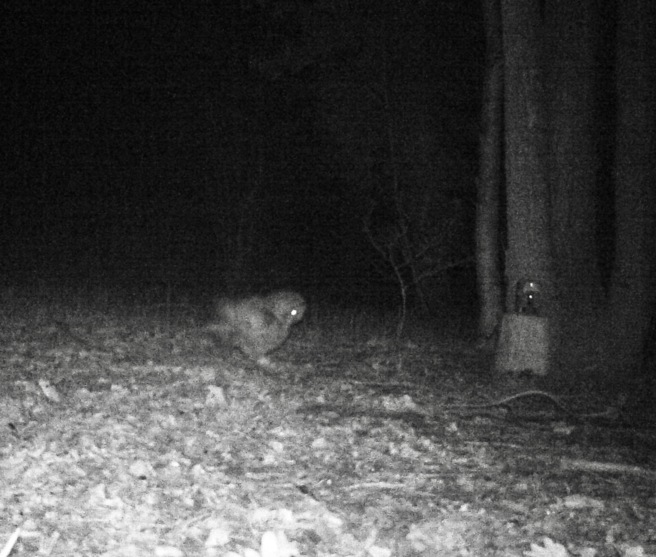 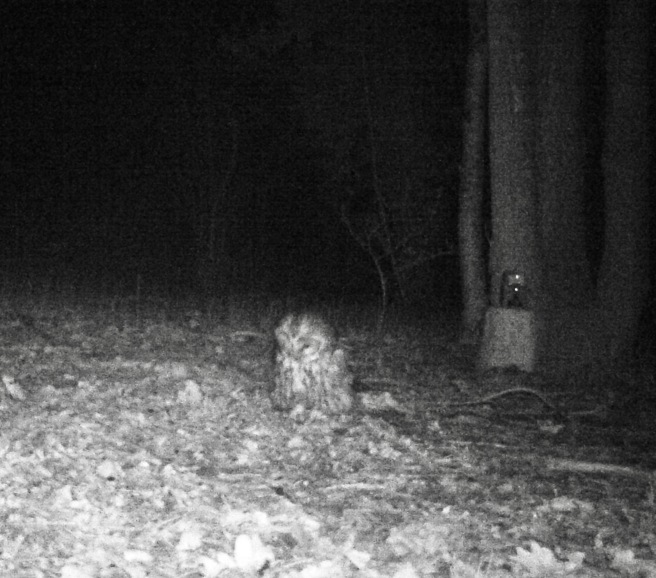 I like the atmospheric setting of the final photo for today. Silver Birch woods have a lot of winter interest. 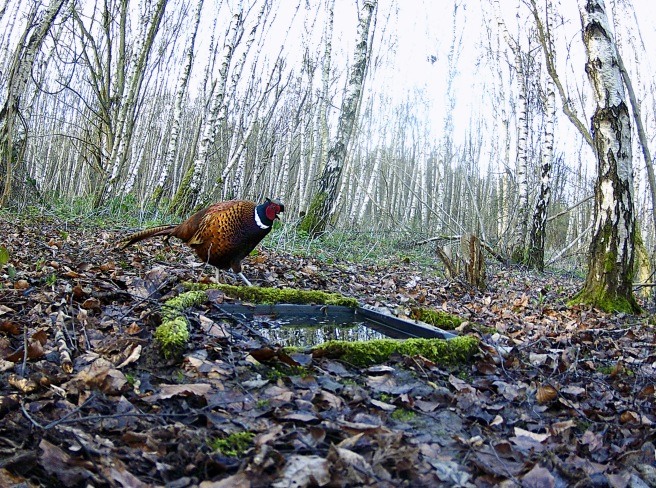