All manner of interesting vessels sail past these meadows but this one today really caught our eye. I have a marine traffic app and so I can tell you that this is a Heavy Lift Vessel called BokaLift1 flying the Cypriot flag. The bit that looks like a piece of the Eiffel Tower is it’s cargo and all the rest is part of the ship’s structure.

So, September has slipped quietly into October. While the days remain on the whole sunny, the autumnal colours are intensifying and night time temperatures are dropping.  I saw a Brambling hopping about the hedgerow yesterday but didn’t have my camera with me and so I was very pleased to see that it had got itself down to the pond this morning to have its picture taken by the trail camera there. A very striking looking bird: 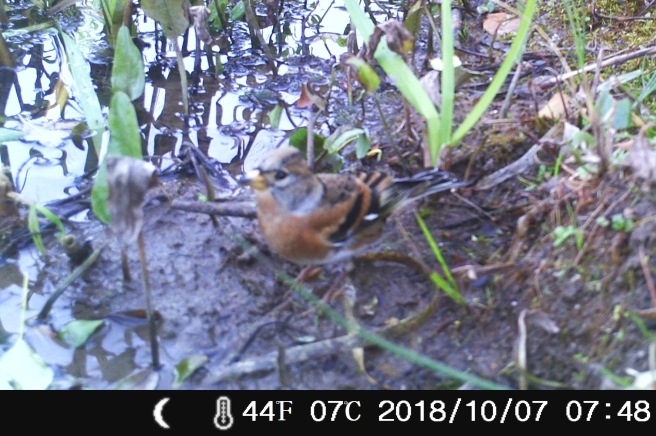 Yesterday we saw a Fieldfare in the Whitebeam, presumably snacking on the heavy crop of berries that they have this year. 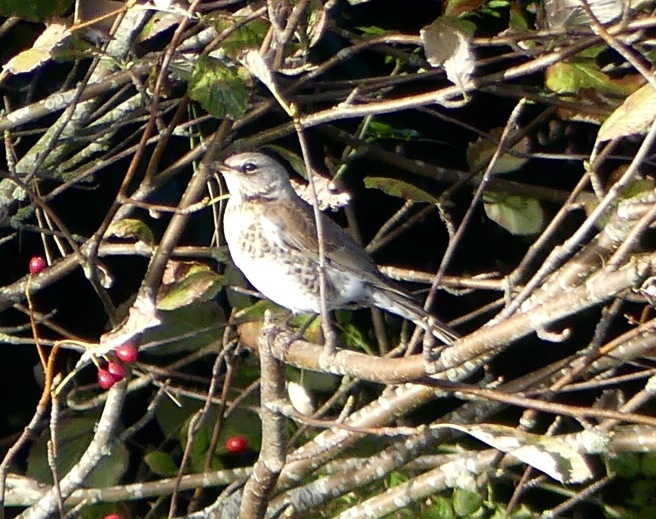 We have never seen a Fieldfare here before and so that is species 68 on our list. Today, we saw another one on a smaller tree and so we have now speculatively placed a camera on this smaller tree to see what else we get eating these berries. Berries are almost always red, orange and yellow and berry-eating birds’ eyesight is adapted so that they can see these particular colours very vividly. As they fly over the meadows, all the berries on the hedgerows will will be highlighted for them. Likewise, the eyesight of seabirds is adapted so that the whites and greys of fish are very obvious. 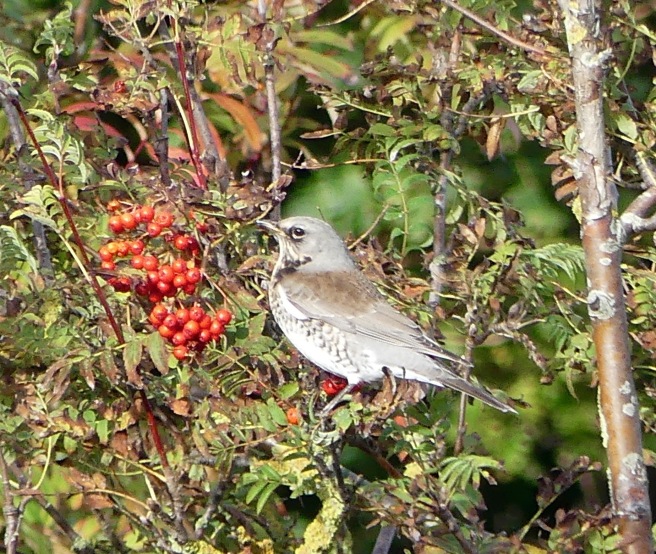 It has been a week since my last post but, while we have been away, our trusty stable of trail cameras have been beavering away on our behalf capturing the wonders of our meadow wildlife. Here is a little run through of some of what they caught. This female Blackcap is having a bath but has spread her tail out beautifully using the surface tension of the water.

There has been another Grey Wagtail passing through:

And some lovely photos of Jays: 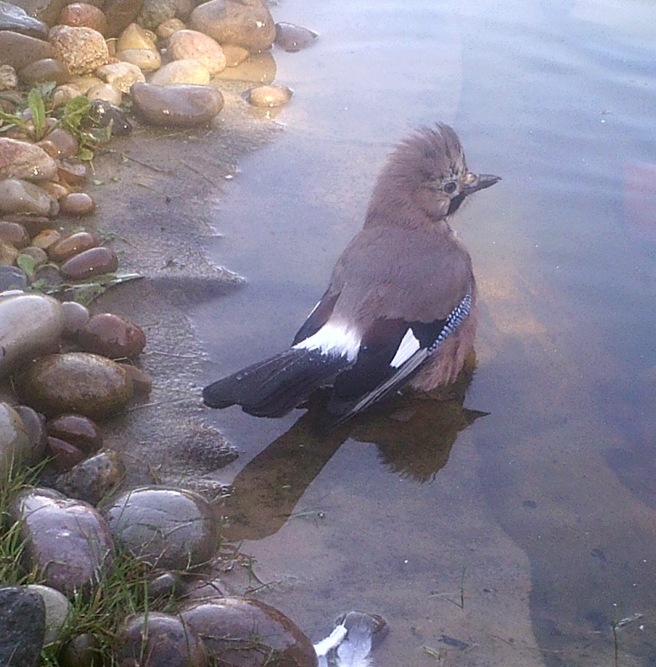 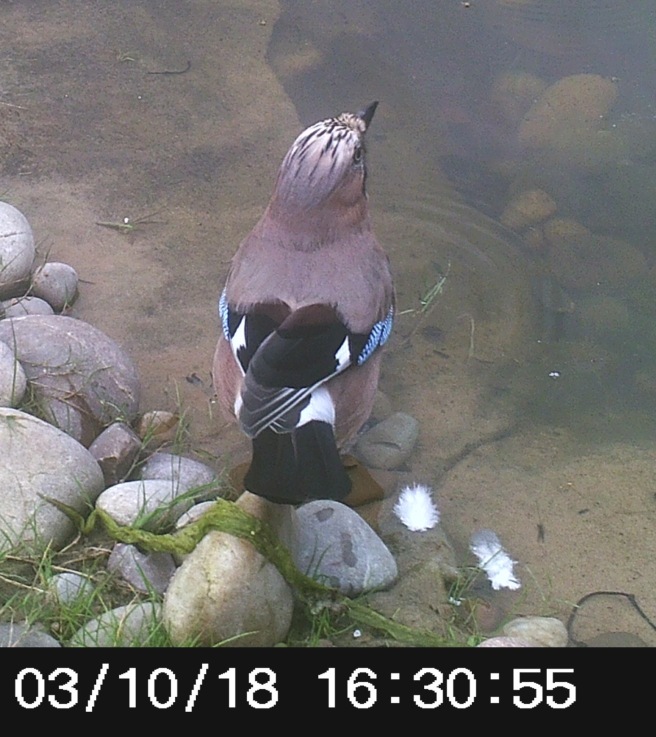 There have been many sightings of the Green Woodpecker: 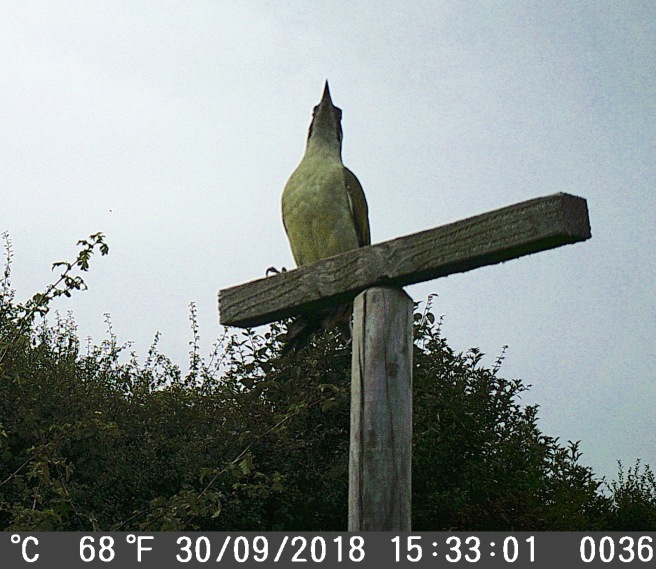 We have lots of anthills and not many mature trees and so it is Green Woodpeckers that we get here. Although we have very occasionally had a Great-Spotted Woodpecker on the peanut feeder. However, there were two here this morning working their way up the Pine tree:

This is a male because it has a red patch on the back of its head.

The Tawny Owl made an appearance on the cameras once while we were away. And when I say ON the camera, I do mean actually perched on the camera. 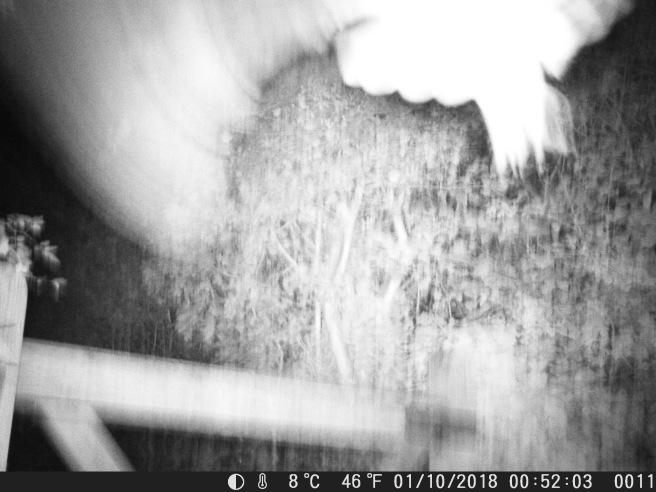 Sometimes its hard to admire the lifestyle of Magpies, but this is certainly a wonderful and unexpected angle of one: 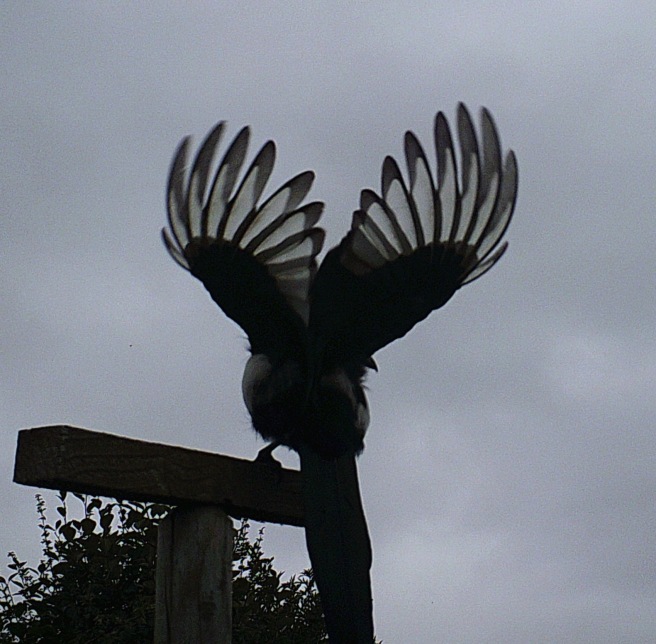 There is now a fox around with the most luxuriant tail:

And of course there is badger stuff as well. Here is a badger emerging from her burrow at dusk to start the day:

And here is a badger trudging home to bed at dawn. Actually, well after dawn – what was going on?

It is unusual to see these badgers out in the light other than in June when the nights are so short. But here is the male badger coming out before dark to see where his peanuts are:

Such a powerful looking animal. Meanwhile, the fun continues as various badgers try to get bundles of reeds through a smallish hole under the fence:

We were inspired by an idea that we saw on a Dutch wildlife website for photographing animals that like to go through tunnels such as Stoats, Weasels and rodents.

Work is now well underway to produce our own version of this: 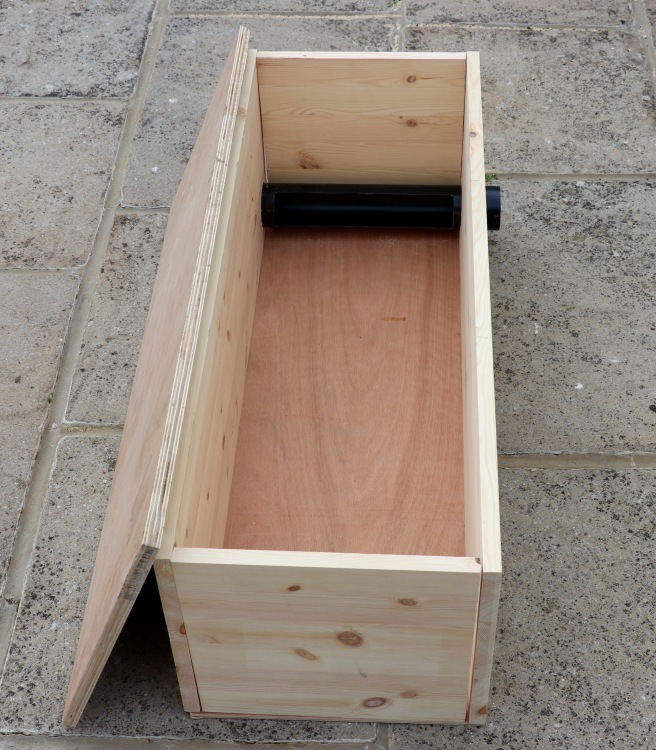 We are using marine ply for the top and bottom and pine wood for the sides. In a few days it should be all finished with a coat of paint and a protective covering of roofing felt and the experiment can begin!

Finally, we saw these beetles today:

They are Chrysolina banksii, a beautiful metallic little beetle that is particularly abundant in coastal areas and associated with Ribwort Plantain. While I was researching these beetles, I came across a cousin of theirs in the insect book, Chrysolina cerealis, the Rainbow Leaf Beetle:

We will never see this beetle here – it is only to be found in Snowdonia and, in fact, even if you went there you are very unlikely to see it since it is exceedingly rare. But it is such an astounding thing that I couldn’t leave it out.