In early February this year, three baby Badgers were born. We know that there were three because we were treated to an unexpected, early glimpse of them on 15th February when the tiny cubs were moved out to a different sett:

Since then, we had seen no more, until just before midnight on Monday night when two of the cubs were carried back to their original sett. The first came across on the lower path: 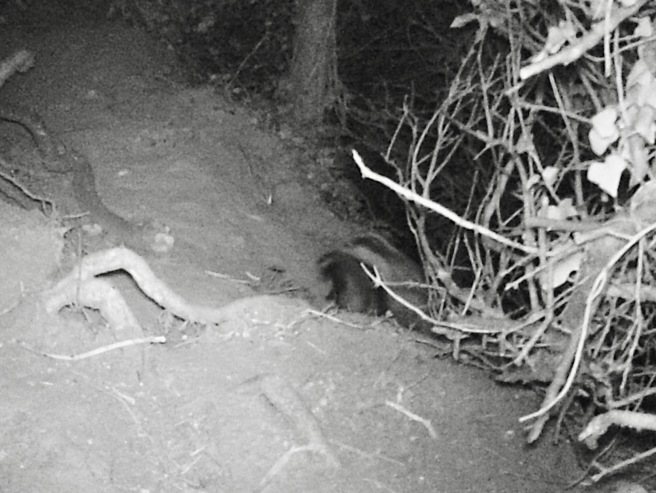 And the second came in on the higher path a few minutes later. 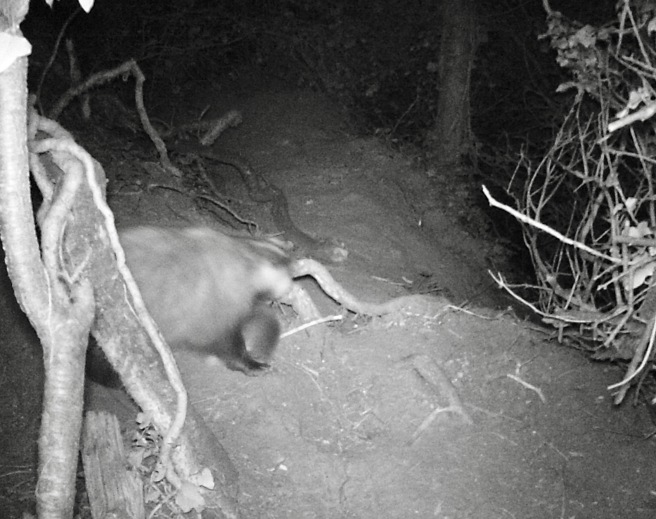 There was then a heart-stopping three and a half hour gap before the third cub was carried in. It is a bit difficult to spot but its head is just visible in the mothers mouth in the photo below: 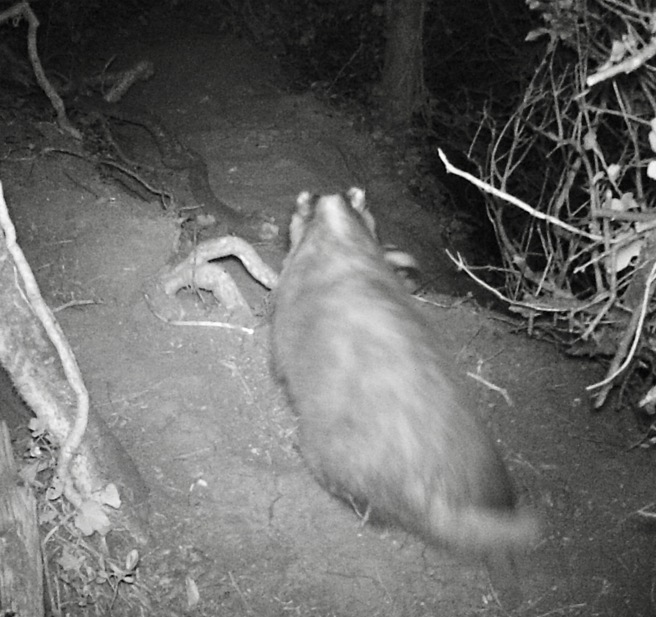 When I got round to looking at the footage from another camera that takes videos along the cliff, I found that it had taken a video of this third cub coming across at 3.30am:

Baby Badgers are ludicrously sweet and it is lovely to see that we still have three of them. My guess is that the cubs have been moved back to their original sett because this is the one that has a wide terrace in front of the burrow entrance. This will be important when the cubs are officially allowed out because the cliff is extremely steep and lethal for a wobbly little cub. Fortuitously for us, this is also the only sett that we have a camera on.

These cubs are the fourth set of young that we have watched this same female Badger raise. She is the most fantastic mother that they could possibly have wished for, fiercely protective and firm but fair. Feeding three cubs like this is no small undertaking as her undercarriage shows:

We had a new entrant onto the Meadows Bird List this week. Species 76 made a fleeting fly by – a solitary Greylag Goose flew across the first meadow as we stood there. I did get a photo but the quality is so appalling that I don’t have the audacity to include it here. Luckily one of us had binoculars on it and so we were able to make a firm identification without relying on my photograph.

However, we did fail to get the White-tailed Sea Eagle onto the list as Species 77.  There had been one seen above the Sandwich Bay Bird Observatory last Wednesday and I was hoping that we would spot it here. The Roy Dennis Wildlife Foundation is the charity involved in the reintroduction of the Eagles onto the Isle of Wight last year and I have downloaded a map from their website.  The coloured lines are the trips that each of the four re-introduced young satellite-tagged Eagles have taken since late March: 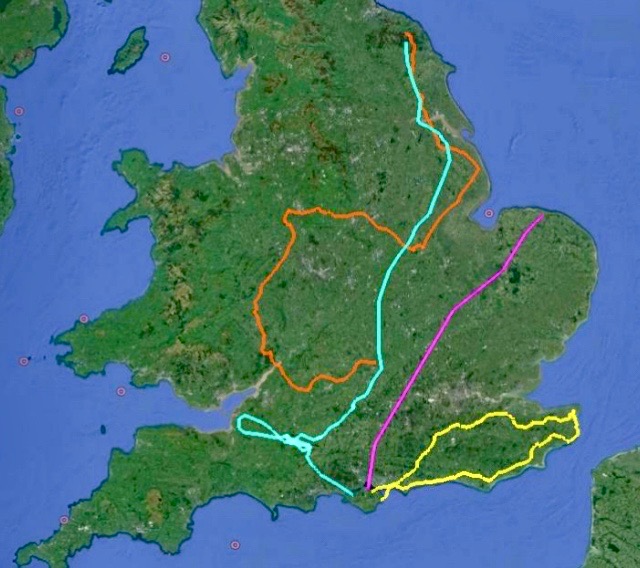 It was G274 that came on a 524km trip round Kent last week and it was clear from his route marked in yellow that he did indeed come over the meadows, although sadly we missed him.

The bird ringer made another solitary visit and has ringed another 9 Linnets. That is 30 Linnets in a week.

He also ringed this male Blackbird with beautiful yellow eye rings and beak:

And he caught a Blue Tit that he had caught before in May 2017. It was already an adult back then and so that means that it is at least four years old. I looked up life expectancy for Blue Tits and see that it is 2.7 years on average. However, the maximum age recorded is 21 years which is an amazingly old Blue Tit.

There are some Starlings around that are clearly nesting nearby. This one below is ringed:

The bird ringer has not ever ringed a Starling in the meadows but he has ringed a couple in his own nearby garden. There is also a bird ringer in Deal who has apparently ringed hundreds of Starlings and so this could well be one of hers.

We have been seeing this male Kestrel hunting in the meadows a lot recently. In fact, I think I can say that we see him every day, although I have been having trouble photographing him. Therefore, it was very handy that he came and plonked himself in front of one of the trail cameras to put me out of my photographic misery:

I have got a bit blasé about Yellowhammers these days. There are a lot of them up on the strip and they no longer cause the sensation they did when they first turned up. But what fantastic birds they are: 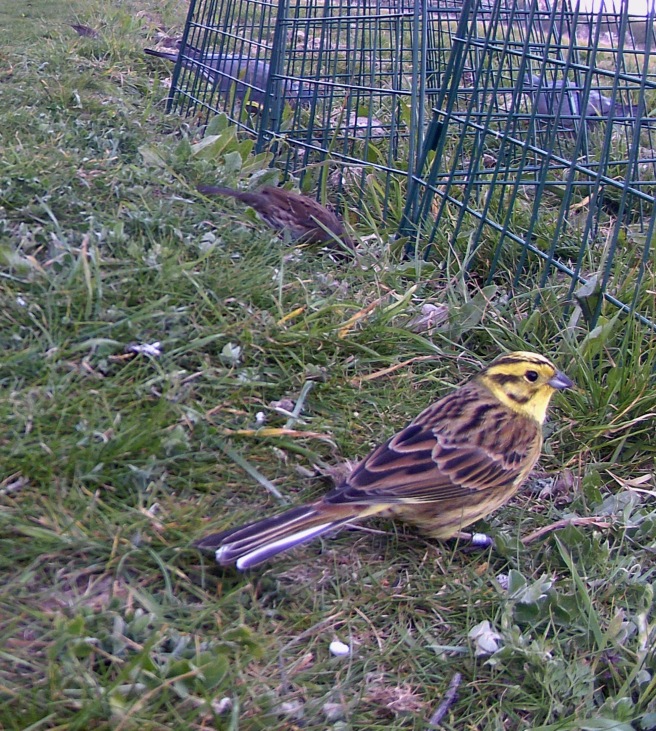 When we put the additional perch up in the Ant paddock, we were envisaging a Tawny Owl perching on it while it surveyed the ground for rodents. We most certainly did not have this scenario in mind: 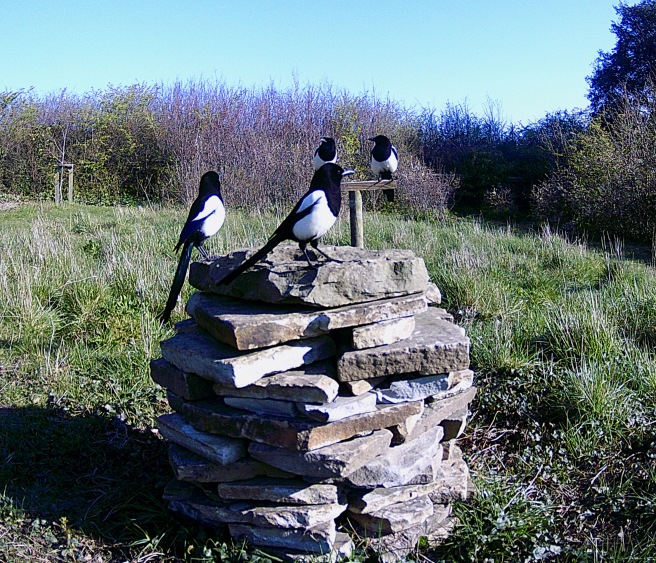 Here is an unusual view of a Magpie: 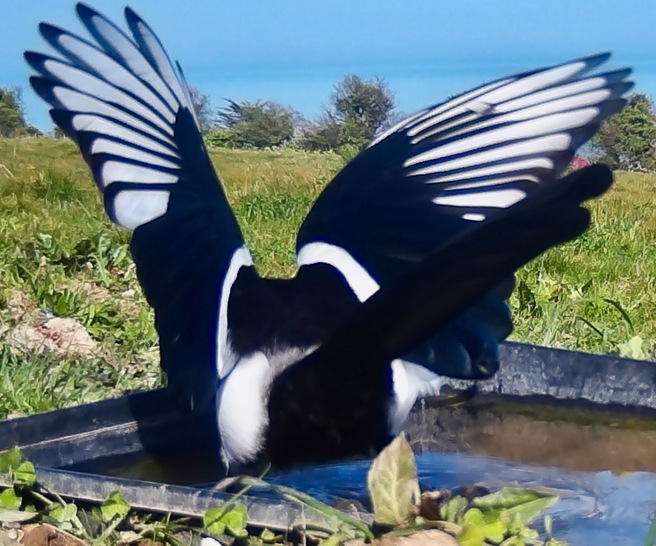 I see that the Pheasant hunting season in the UK runs from 1st October to 1st February each year. It is very unusual to see a Pheasant in the meadows and so nice to see this one strolling past and to know that it has survived the hunting season and can now get on with enjoying its summer: 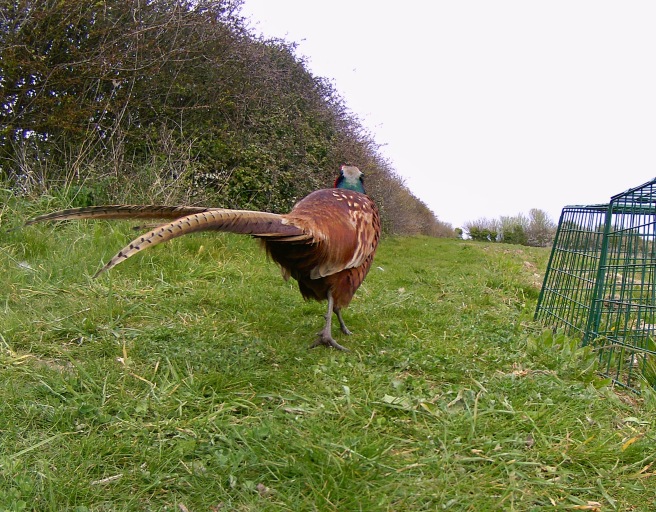 Before I leave birds, I just wanted to also include this photo of a fluffy Stock Dove, drying off after a bath:

Some of the Hawthorn in exposed places along the high hedgerow has been damaged, either by the late frosts we had last week or by the relentless freezing north-easterlies that blew for many days: 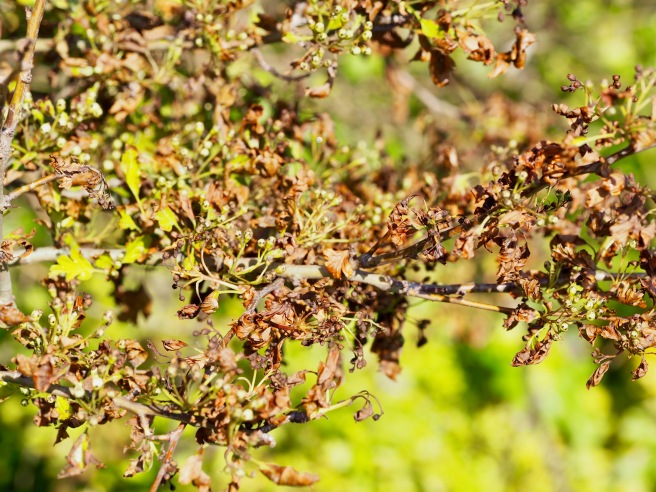 Where there is more shelter, however, the Hawthorn is looking fresh and glorious and is about to burst into bloom:

I have seen and managed to identify two species of Leatherbugs:

A lovely looking Rat. Rats get a tough time round here – too many Foxes, I suspect.

And, talking of Foxes:

We were very excited yesterday afternoon when a Warship came alongside the meadows and dropped anchor.

This is the RFA Tidespring A136 of the British Royal Fleet Auxillary. She is a replenishment tanker with the primary role of refuelling Naval warships at sea. She has anti aircraft guns to protect herself and a helipad and hanger at the back and 64 personnel on board with the ability to carry 46 more.

Twenty-four hours later and she is still with us. We have never had a Naval vessel alongside before and I wonder if it is here for a Corona Virus related reason. I know that those on board will no longer have their hammocks densely strung between the beams below deck as in days of olde but living on board must mean that they are in close proximity to each other. How is it that all working for them?

I hope they can see our message of solidarity that we are sending them from the shore:

One thought on “Moving House”