The annual cut of the meadows has now begun in earnest, although we are having to choreograph the work to fit into pauses in the rain.

The much smaller first meadow is now completed and work on the second meadow has started. Several bits have been left long and one area has been cut really hard to leave patches of bare soil because we want to sow wildflower seed there.

We bought the seed from Emorsgate: 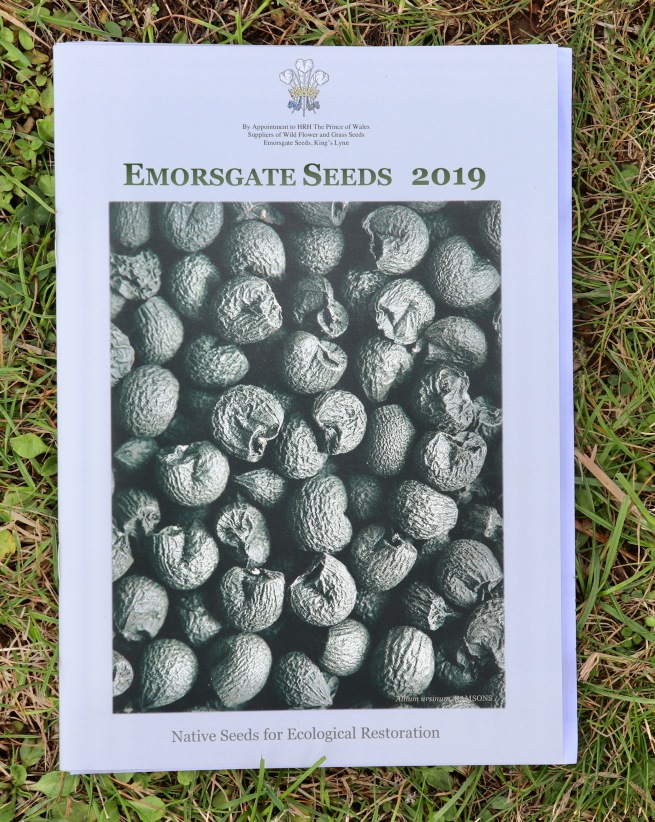 I love looking at their website – it is even possible to buy a seed mix taken from the Prince of Wales’ famous wildflower meadows at Highgrove. Although that would not be appropriate for our soil conditions here – we have bought EM6F which is a seed mix of native perennials for chalky soil.

We have also added in some additional Yellow Rattle seed, a plant that is parasitic on grass and so knocks it back, allowing the flowers more space to flourish. Cutting the meadows and taking away the arisings year-on-year also reduces nutrient levels and discourages grasses but Yellow Rattle is another tool in the flower meadow toolbox:

All the cut grass was piled up near the gate into the meadow and over the next few months we will work at getting that away through a combination of taking loads down to the recycling centre and bagging it up and putting it out for the fortnightly green waste collection. We did deposit some down by the Badger sett to see if they would want to use it for bedding. We suspected they would.

The next morning there was a grassy trail leading from the pile to the the hole under the fence, beyond which the Badger sett lies: 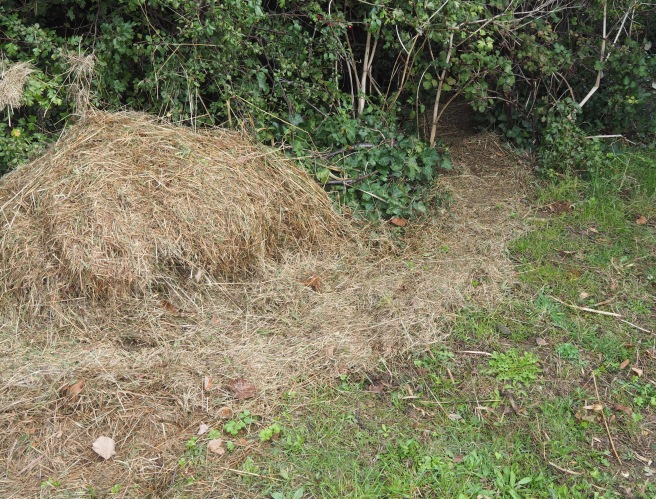 The trail then led along the cliff path towards the sett:

In fact here they are, the beauties, caught red-footed:

A couple of days later and the hay pile had all disappeared underground:

I love the thought of them now sleeping on freshly cut, sweet-smelling hay.

In a previous post I mentioned an experiment we were planning to see if Yellow Rattle has the same negative effect on Tor Grass as it does on other meadow grasses. We have Tor Grass along the northern boundary of the meadows and it is starting to spread slightly which concerns us because it can be a bit of a thug. We also have a few isolated clumps of it and we selected one of these on which to conduct our experiment:

At this point of the proceedings, a Lizard was spotted just in front of the tractor and so a rescue mission was successfully carried out:

The meadows are generally cut quite high meaning that small mammals, amphibians and reptiles like this Lizard that live amongst the grass would normally be expected to survive. But in this instance we were going to be cutting the grass really short to sow seed onto it and so we were happy to have spotted and rescued this little thing first.

We have marked where the patch of Tor Grass is and we will monitor it next year to see how it gets on.

One area of the second meadow has quite a lot of Creeping Thistle which is another plant that we would like get under control. Therefore, we are also going to sow Yellow Rattle there to see what happens. I know we can’t expect Yellow Rattle to be our knight-in-shining-armour for all our problems but there seems nothing to lose from having a go.

This is quite interesting. In the photo below, the grass on the left hand side was cut last autumn. However, the grass on the right hand side has been left two years since it was cut. The right side is much browner because of all the anthills that have had an additional year to develop and grow.

The bird ringer has been back and was busy ringing mainly Goldcrests and Chiffchaffs. He also got a Robin control – a bird that had been previously ringed elsewhere. He has now had three controls in the past two visits and we await information on where and when they had been ringed before.

There are a lot of berries of various sorts now adorning the hedgerows ready as an autumnal feast for birds. This Mistle Thrush rather fancied these Rowan Berries: 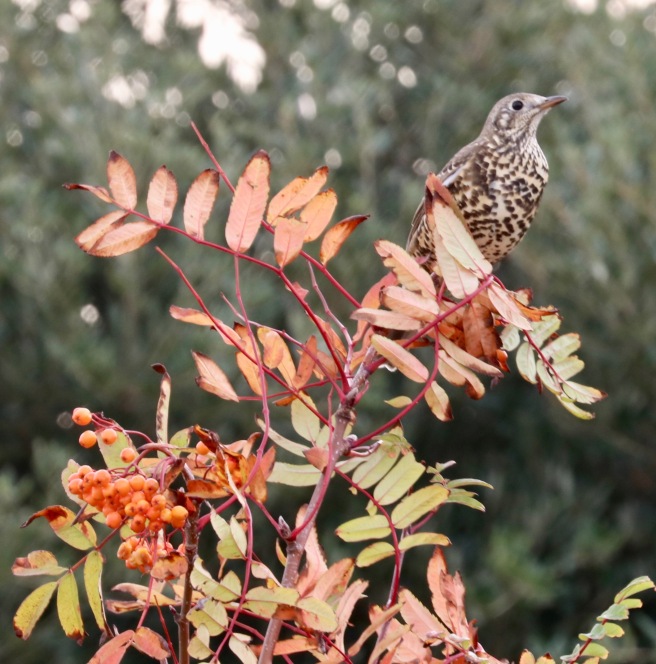 This beautiful Kestrel came down for a bath: 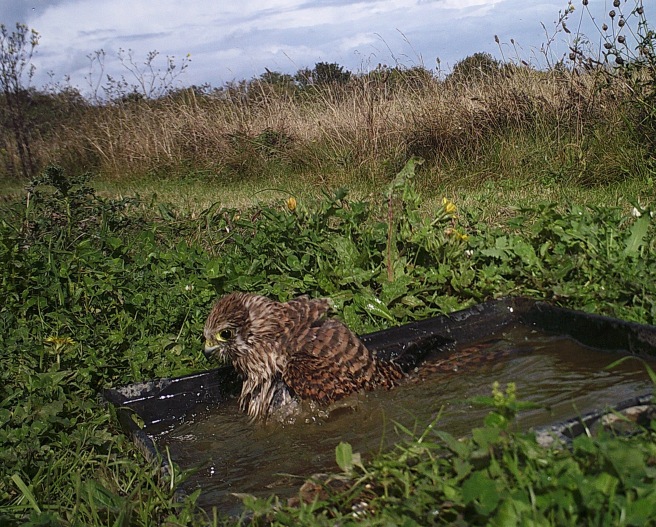 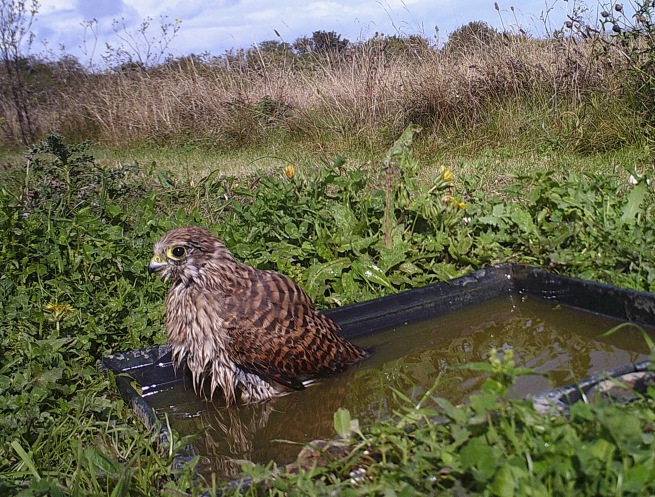 At no point in the sequence of photos do we see her right leg to tell if she is the bird that was ringed here a couple of weeks ago.

Green Woodpeckers are regular users of the bathing facilities:

Magpies are very enthusiastic bathers – no wonder these little ponds need topping up with water so very often. 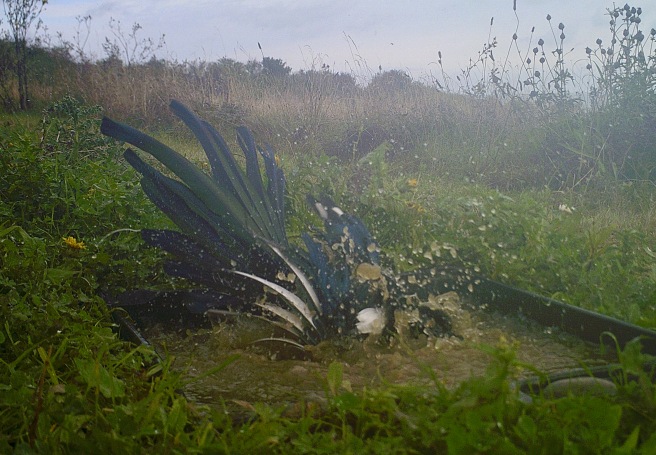 Below is another keen user of the ponds, although an altogether less welcome one having seen it eat hundreds of frogs and newts here earlier this year. So, here it is back again but we have formulated a plan to stop the same wholesale slaughter happening again next frog-mating season and so we are not unduly worried:

The Badgers here are pretty much strictly nocturnal and it is only in the very short nights around June that we stand a chance of seeing them in the light. But here is a Badger out of her sett in the middle of the afternoon:

I find this slightly alarming because surely something was wrong for her to have done that.  But all seems well again now and so the reason for this most unexpected appearance remains a mystery.

The owner of our local, friendly garden centre is retiring after many decades of running his plant sales and landscaping business. They have done a lot of work in these meadows over the years including digging both of the large ponds and it feels like the end of an era. However, on the plus side, he is now clearing his land and we have relieved him of these assorted bits and pieces of York stone which we will use to build some sort of wildlife structure as a project over the winter: 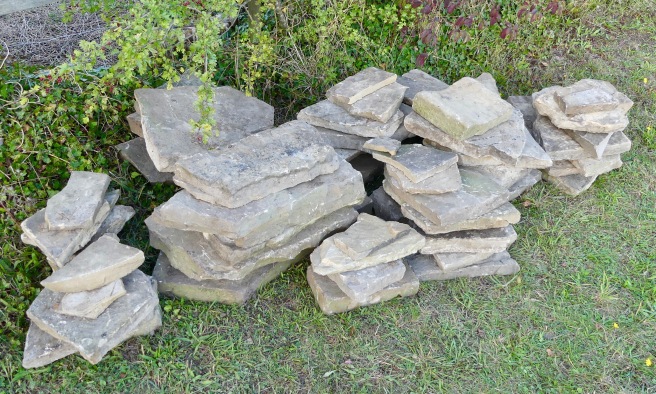 Included amongst the stone is this one:

It has been suggested that this stone is from some sort of Roman water system but I don’t think there is necessarily any sound basis for this speculation. From time to time an archeologist visits these meadows and we will see what he thinks when he is next here.

The wood is looking completely glorious at this time of year.

There are now so many Toadstools. I have tried to identify them but I’m afraid don’t have a lot of confidence in my IDs – it’s difficult!

I love this photo of wood Badgers: 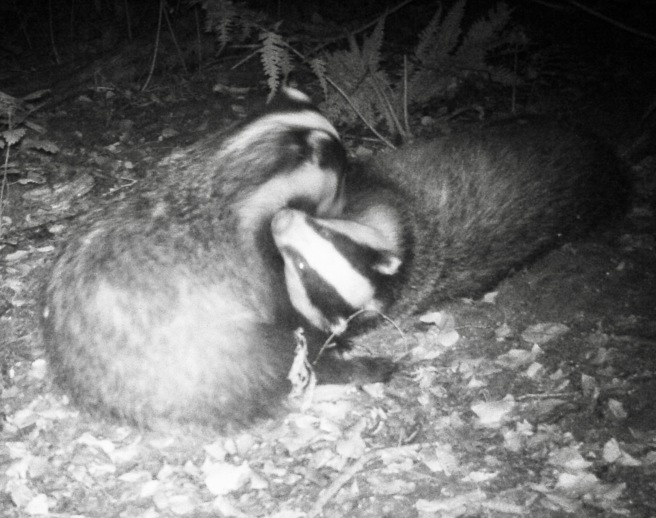 I finish today with a series of photos that I just want to entitle ‘Unexpected Item in the Bagging Area’ We have moved the Mustelid box to the wood where we thought we would be more likely to get a Stoat or Weasel. So far we have had Mice, Voles, Shrews and once a Squirrel came in. It is positioned in dense undergrowth but not that far from a small warren:

So, after that introduction, here are the photos: 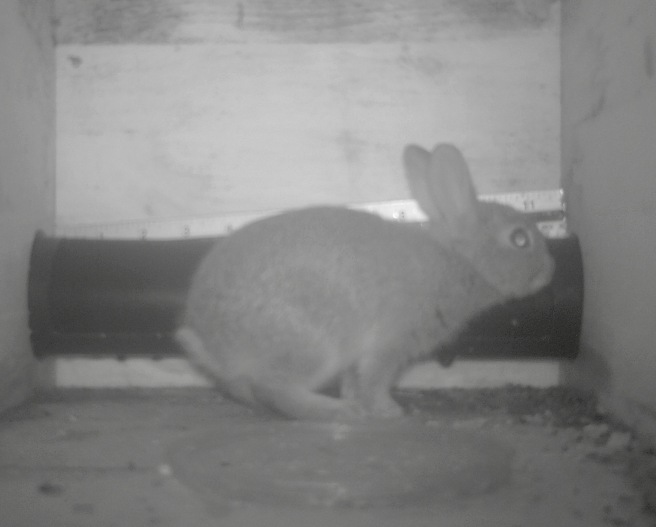 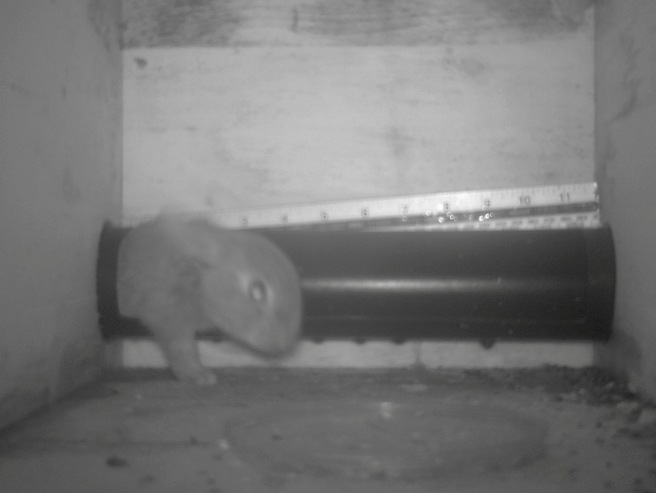 For the last couple of days this adorable young Rabbit has been spending an awful lot of time in the box and even sleeping in there. So what will happen now if a Stoat or Weasel did now decide to take a look in? This sweet young Rabbit would be a sitting duck, that’s what. Always so much to worry about.

3 thoughts on “The Annual Cut Commences”